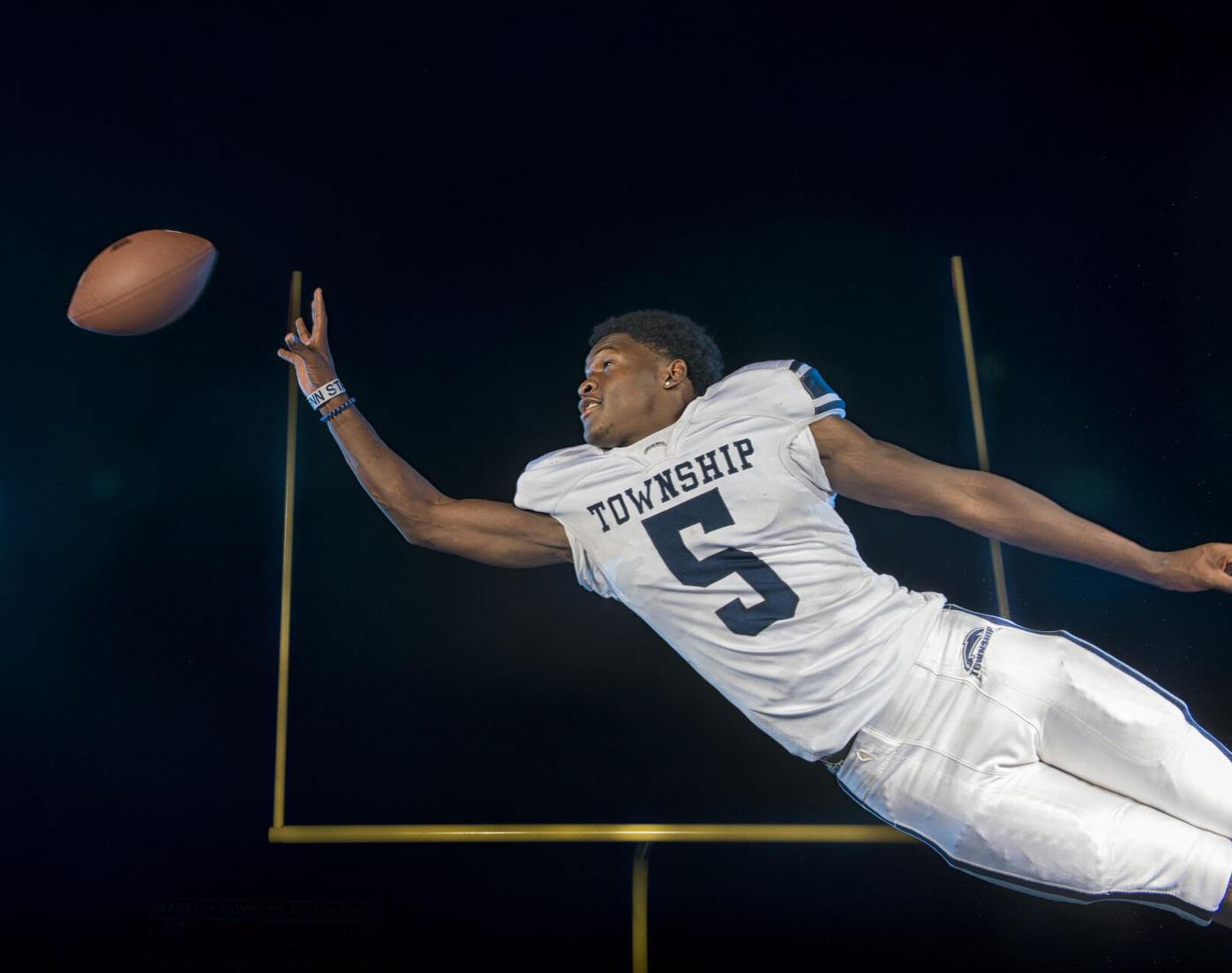 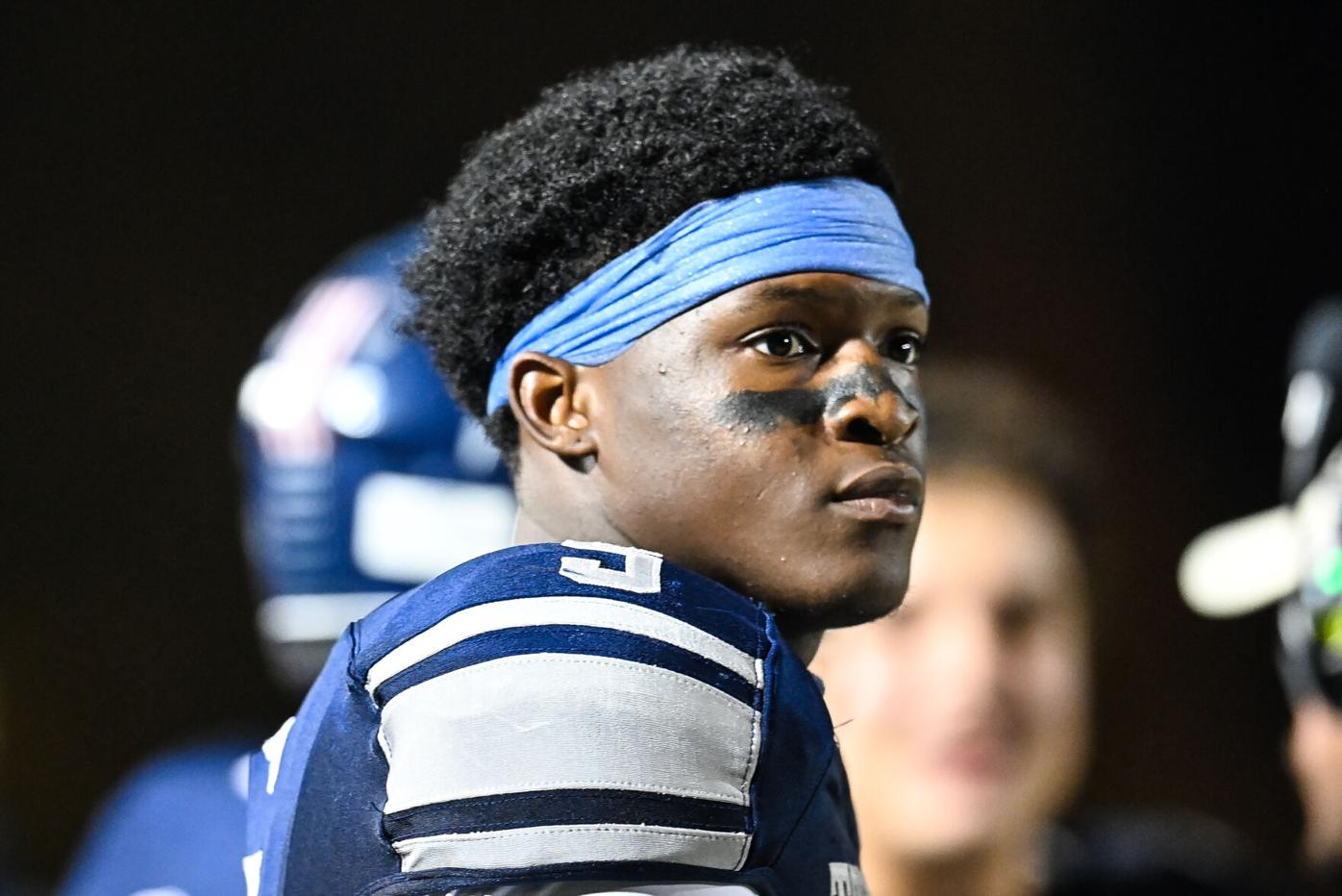 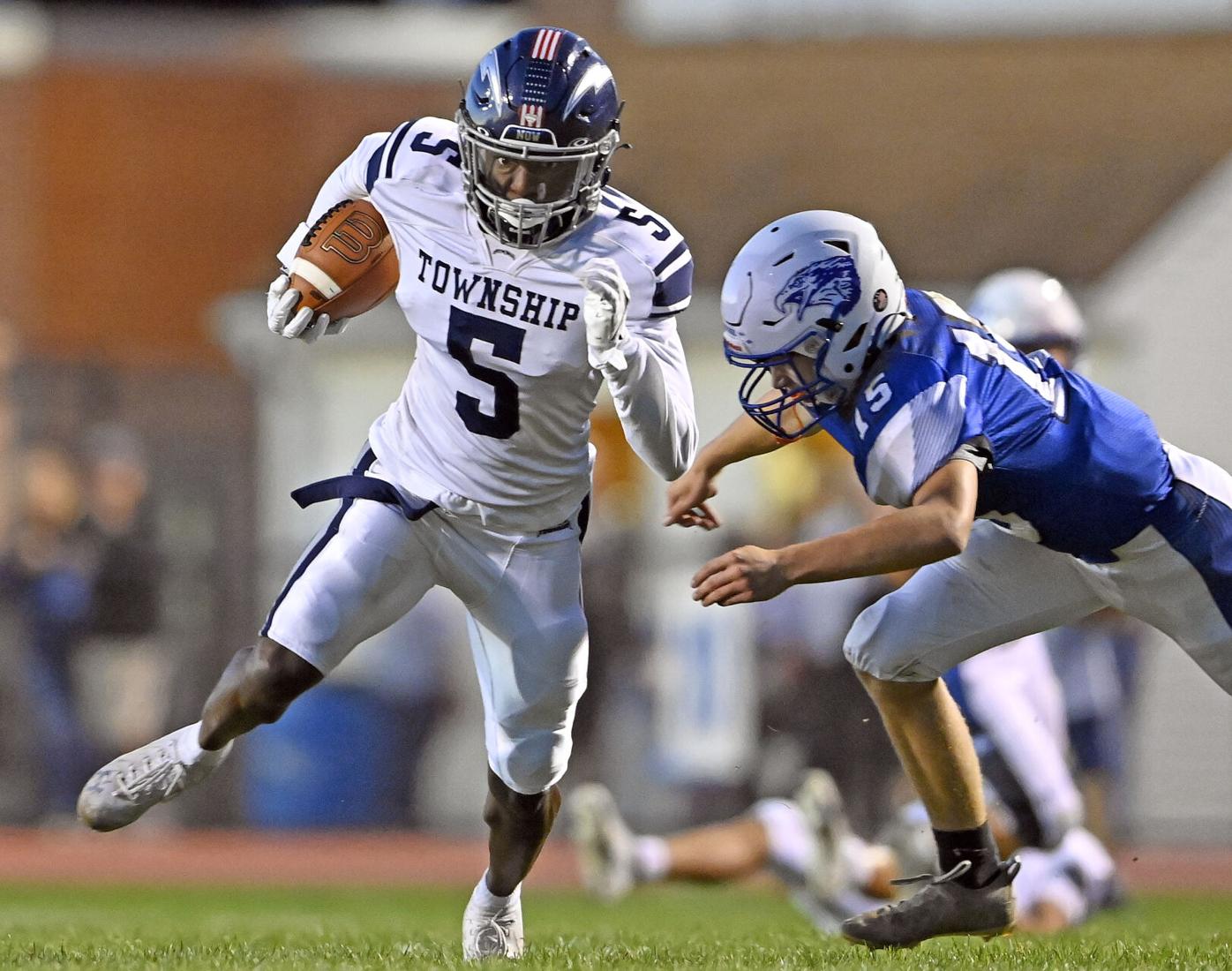 Manheim Township's Anthony Ivey (5) takes off after a catch against Cocalico during first-half action of an L-L League crossover football game in Eagle Stadium in Denver on Friday, Sept. 24, 2021.

Manheim Township's Anthony Ivey (5) takes off after a catch against Cocalico during first-half action of an L-L League crossover football game in Eagle Stadium in Denver on Friday, Sept. 24, 2021.

Anthony Ivey made quite the debut splash for Manheim Township’s football team.

It was Sept. 21, 2018, and in his first action as a ninth-grader for the Blue Streaks, he popped a kickoff return 85 yards for a touchdown on his first varsity touch in Township’s 36-24 victory over Cocalico.

“I didn’t just want to be on the team as a freshman,” Ivey said. “I wanted to make an impact.”

He certainly did that night, and he hasn’t slowed down one bit.

A couple of weeks back, Ivey, now a senior and a team leader for the Streaks, hauled in his 100th career reception, and he’ll head into Township’s Lancaster-Lebanon League Section 1 showdown against rival Hempfield on Friday with 106 receptions in his career, for 1,941 yards (18.3 yards a grab) with 19 TD catches.

He has been a defensive coordinator’s worst nightmare during his Streaks’ days. And a lot of opposing cornerbacks over the last several seasons have lost sleep knowing they had to mark Ivey that week.

Ivey’s two most memorable games: In his sophomore season, he torched Wilson for eight catches for a league-record 292 yards (36.5 yards a snag) with a pair of TD receptions, including an 83-yarder, and in his junior season against Cocalico, Ivey caught six passes for 226 yards (37.7 yards a catch) with four TD snags, including a 75-yarder.

He’s been a league all-star. He’s been named all-state. He’s dazzled in his pass-catching, route-running and breakaway speed abilities. And he’s a future Division I athlete; Ivey has made a verbal commitment to play for Penn State.

“It’s gone fast here,” Ivey said. “It seems like yesterday when I was a freshman. It’s crazy how fast this has gone. And it’s only going to go faster, so I’m trying to cherish every moment.”

“I think he’s going to fit in well,” Township coach Mark Evans said of his prized wideout, “especially if he continues to grow and develop like we all know he’s capable of.”

“I’m prepared to go in there and compete with players of that caliber,” Ivey said. “It’s going to be fun. I’m ready to get there. It’s going to make me a better player and a better person every single day.”

Dotson is projected to be a first-round pick when he takes his talents to the NFL. Ivey has messaged with Dotson, and he spent a good chunk of his official visit to Happy Valley this past summer with Washington and Lambert-Smith.

“I’m really excited,” Ivey said. “It seems like the whole program is on the move, and it’s going up ever since (Yurcich) has gotten there. He’s bringing a lot of new things to the table.”

And with James Franklin at the helm, Penn State will always feature an intricate, high-powered offense. Ivey is anxious to join that group next year.

“To get to go there and to be in that atmosphere,” Ivey said, “is like the cherry on top.”

Ivey has developed a special bond with Evans over the years, and that helped Ivey immensely during his recruiting process and overall maturation on and off the field over the last four years. Evans is a former D1 player himself — he played for Miami (Fla.) during his college days — so he’s been able to instill plenty of life lessons along the way.

“Coach has done an awesome job molding me and making me more responsible and having that self-accountability,” Ivey said. “He’s taught me some great lessons, and he’s inspired me. I never really thought college would be an opportunity for me. I never thought about playing college football. Ever. College football wasn’t even a thought.”

Then the offers started coming in — Virginia Tech and West Virginia early on, with 12 in all, including Penn State — and Ivey started leaning on Evans for advice.

“From there,” Ivey said, “I started taking everything more seriously, paying attention to even the littlest of things.”

End result: Ivey’s name is all over Township’s record book, he’s having a big senior season for a first-place team, and he has a scholarship from Penn State in his back pocket with a shot to play in front of 110,000 fans in Beaver Stadium in his immediate future.

“He’s a special young man who has a lot of gifts and a great opportunity in front of him,” Evans said. “My hope and my goal for him is that he maximizes the whole thing.”

Here are five individual matchups to watch when Lancaster-Lebanon League football teams hit the field Friday for the Week 8 games ...

Week 8 is on the plate for Lancaster-Lebanon League football teams, meaning there are just three more weeks to hash out section champions and …

Octorara gets a visit this week on the L-L Football Roundtable, sponsored by Thaddeus Stevens College of Technology. LNP|LancasterOnline sport…

The annual Battle of the Braves football game is off.

Penn State quarterback Sean Clifford is not out for the season.

Time of possession. A lot of Cam Harbaugh. A stout defense. No turnovers or penalties. Hempfield mixed those ingredients together Friday to ea…

Check out the L-L League Football forecast for Week 8