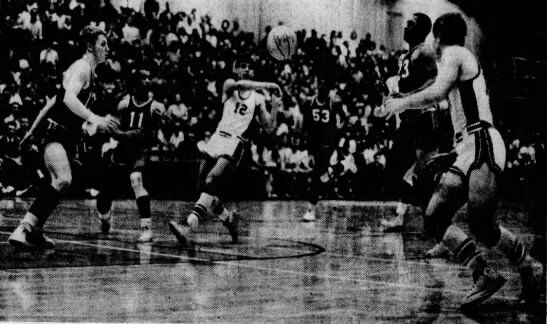 Bob Swavely, center, was a senior on the 1966 Conestoga Valley boys basketball that won section and league titles and reached a District Three championship game. 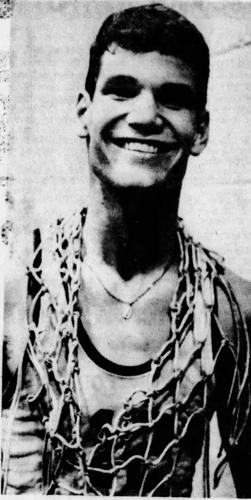 Bob Swavely photographed after the 1966 District Three Class 1A title game in which he helped Conestoga Valley top Chambersburg in double overtime.

While putting together a story about longtime Conestoga Valley boys basketball scorekeeper Ed Sieber earlier this week, I came across a name with which I’m familiar when it comes to CV boys basketball: Bob Swavely.

Through interviews with various folks for the Sieber story, I learned that Swavely died last August. He was 73.

While saddened by his passing, it made sense then that I had not heard from Swavely this basketball season, as he often was a second set of eyes on CV boys basketball box scores and would notify me of corrections, among other Buckskins-related historical markers, throughout each season.

It just so happened while I was putting together the story about Sieber I took quite a few photos of basketball-related objects within the CV trophy case next to Robert Rill Gymnasium, and stumbled across Swavely’s name on a basketball commemorating the 1965-66 CV boys basketball team that went 23-1, won section and league titles, and reached the 1966 District Three Class 1A championship game. The run was kept alive when Swavely scored four points in five seconds to tie the district semifinal game near the end of regulation and later scored the go-ahead bucket in the second overtime in a 50-47 win over Chambersburg. That 1965-66 CV squad is the first to have reached a district final in the program’s history — though the Bucks lost to Reading, 37-35. (The 1994-95 team made it to the Class 3A district final, falling 65-54 to Mechanicsburg.)

It came at a time when the Bucks’ were a part of the Lancaster County Scholastic League (CV joined the newly-formed Lancaster-Lebanon League beginning in the in 1972-73 season). Swavely was a senior on the 1966 team, at a time when CV was in the middle of a run of three-straight section and county championships.

Swavely later returned to his alma mater and served as ninth-grade boys basketball coach and then as assistant for the junior varsity and varsity teams, over a coaching career that spanned 30 years.

“He was the type of coach players would run through the wall for,” Lancaster Country Day coach Jon Shultz said.

Shultz was a longtime CV assistant before taking the LCD job five years ago.

“Bob was a shirt-off-his-back type of guy,” Shultz said.

New 3-point leader: Manheim Central senior guard Trey Grube became the league’s all-time career 3-point leader in Friday’s overtime loss to E-town. He surpassed previous record-holder and Cocalico alum Tucker Lescoe, who finished with 271 for the Eagles as a senior in the 2015-16 season. Through Saturday, Grube sits at 278 career 3s. Speaking of which, while covering Manheim Central this week, I noticed Grube had something written on his sneakers: 2-1-16. I asked Grube about it after last Tuesday’s overtime in at Warwick. Turns out the sequence of numbers are the date of death for his paternal grandfather Chris Thompson, a United States Marines veteran and father of seven who was 81 when he passed away.

“He was a big father figure for my dad,” Grube said. “He taught him a lot of lessons. He taught me a lot of lessons, too. His passing hit us hard. I tape my wrist and put a cross on it. I’ve been doing that since my freshman year.”

Grube's father, and Thompson's son, Derek Grube, said his father, 'played semi-pro football for the Harrisburg Caps and baseball for the Lancaster Red Roses.' Upon seeing Trey play basketball in third grade, grandpa Thompson said, he looked at son Derek (father of Trey) and said, "Trey is going to be a good one."

Ephrata 67, Elizabethtown 63, 1 OT: In a L-L Section Two matchup last Tuesday, Ephrata led 12-7 at the end of the first quarter. Elizabethtown tied it by halftime, 23-23. The visiting Mountaineers went back up 39-35 going into the fourth quarter. Down a bucket in the closing seconds of regulation, E-town’s Caiden Zeager hit a bonkers, three-hands-in-his-face, fall-away 3-pointer to tie it, 58-58. E-town cut the deficit to 65-63 with 13.1 seconds left, but Ephrata hung on for the win.

CAIDEN ZEAGER! TIES IT AT THE HORN! WE’RE GOING TO OVERTIME! 58-58 between E-Town and Ephrata. @JWalkLNP pic.twitter.com/eqSDx6UA8M

Manheim Central 67, Warwick 60, 1OT: In a game featuring 12 lead changes, the Barons outscored the host Warriors, 15-8 in the extra period. It was Manheim Central’s first OT game of the season, while Warwick went beyond regulation for the fifth time. Full game coverage can be found here.

Elizabethtown 69, Manheim Central 63, OT: The host Barons and visiting Bears went extras, each for their second game in a row, E-town for the third time in its last five games. Manheim Central forward Aaron Enterline hit a corner 3-pointer near the end of regulation to tie it. E-town outscored the Barons 9-3 in OT. The Bears were led by Brenden Lehman (21 points), Braden Cummings (17 points), Noah Locke (15 points) and Caiden Zeager (11 points).

Monday, Jan. 23: Four games involving seven L-L teams. Of those, Section Three matchups Cocalico at Lancaster Catholic and Donegal at Lampeter-Strasburg have chances to go down to the wire.

Friday, Jan. 27: Five games involving 10 L-L teams. Of those, Section Three matchup Octorara at Donegal is intriguing considering the Indians beat the Braves in their last matchup, and a Donegal win could force a three-way, first-place tie in the section.

In case you missed it: Check out this feature story on longtime CV boys basketball scorekeeper Ed Sieber … this video on Lancaster Country Day senior Nile Abadir, a tennis standout who is playing basketball and contributing for the Cougars this season...

What a week for Lancaster-Lebanon League alums competing at the next level.

Hempfield saw its lead 17-point third quarter lead disappear when McCaskey went in front by a point with 49 seconds left Tuesday night. It was…