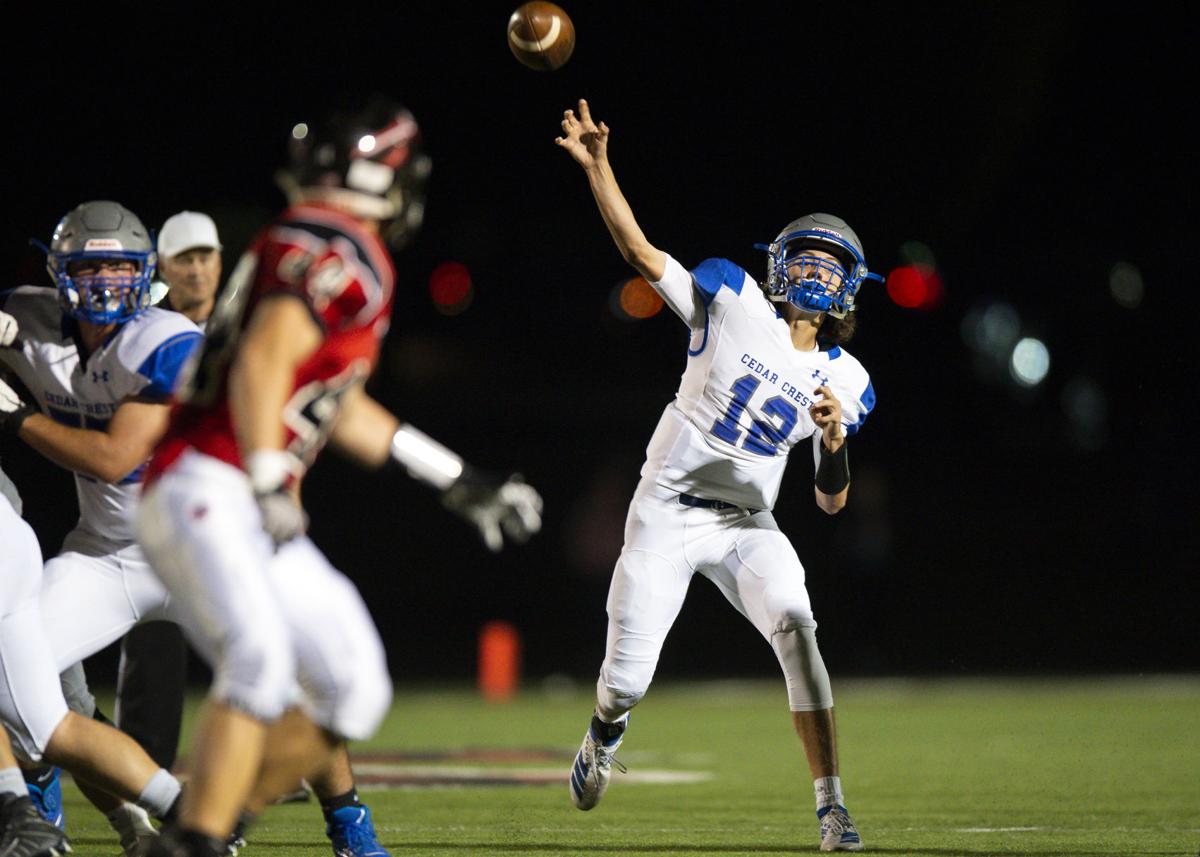 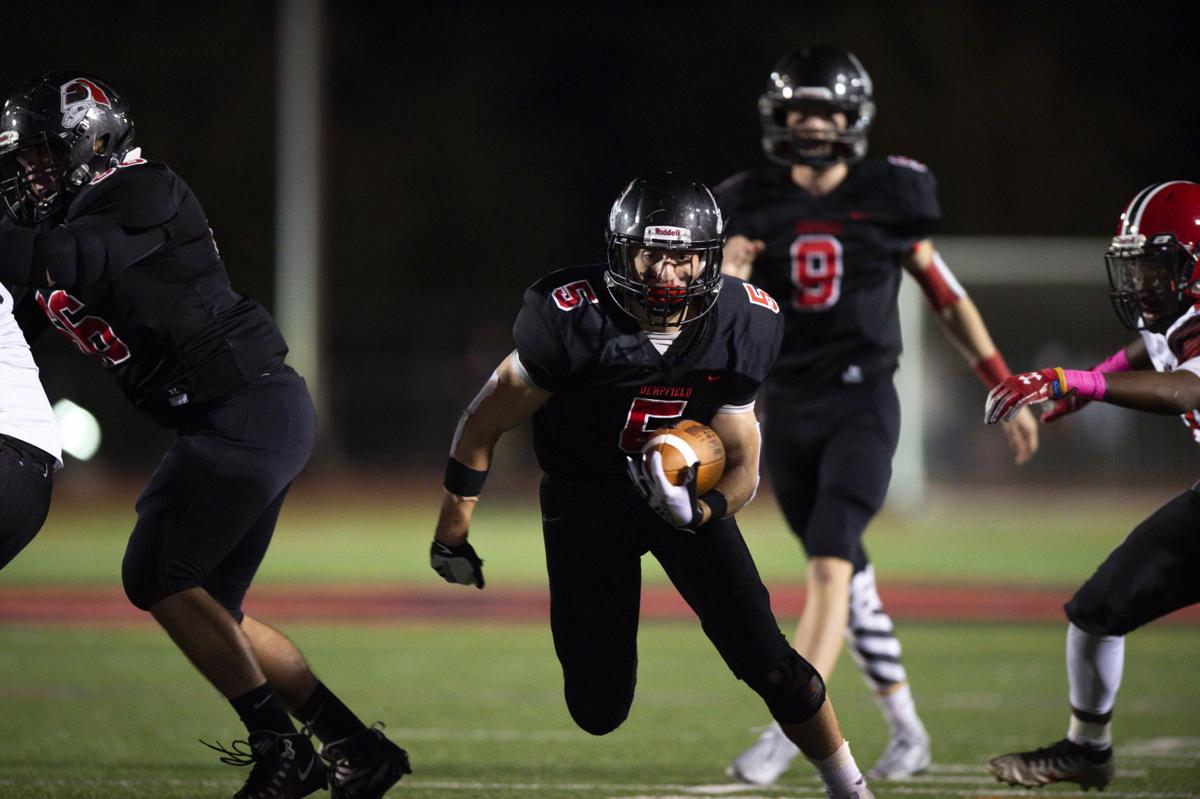 Hempfield’s Tanner Hess runs the ball for a touchdown against McCaskey in an L-L League Section 1 game at Hempfield High School on Friday, Oct. 11, 2019. 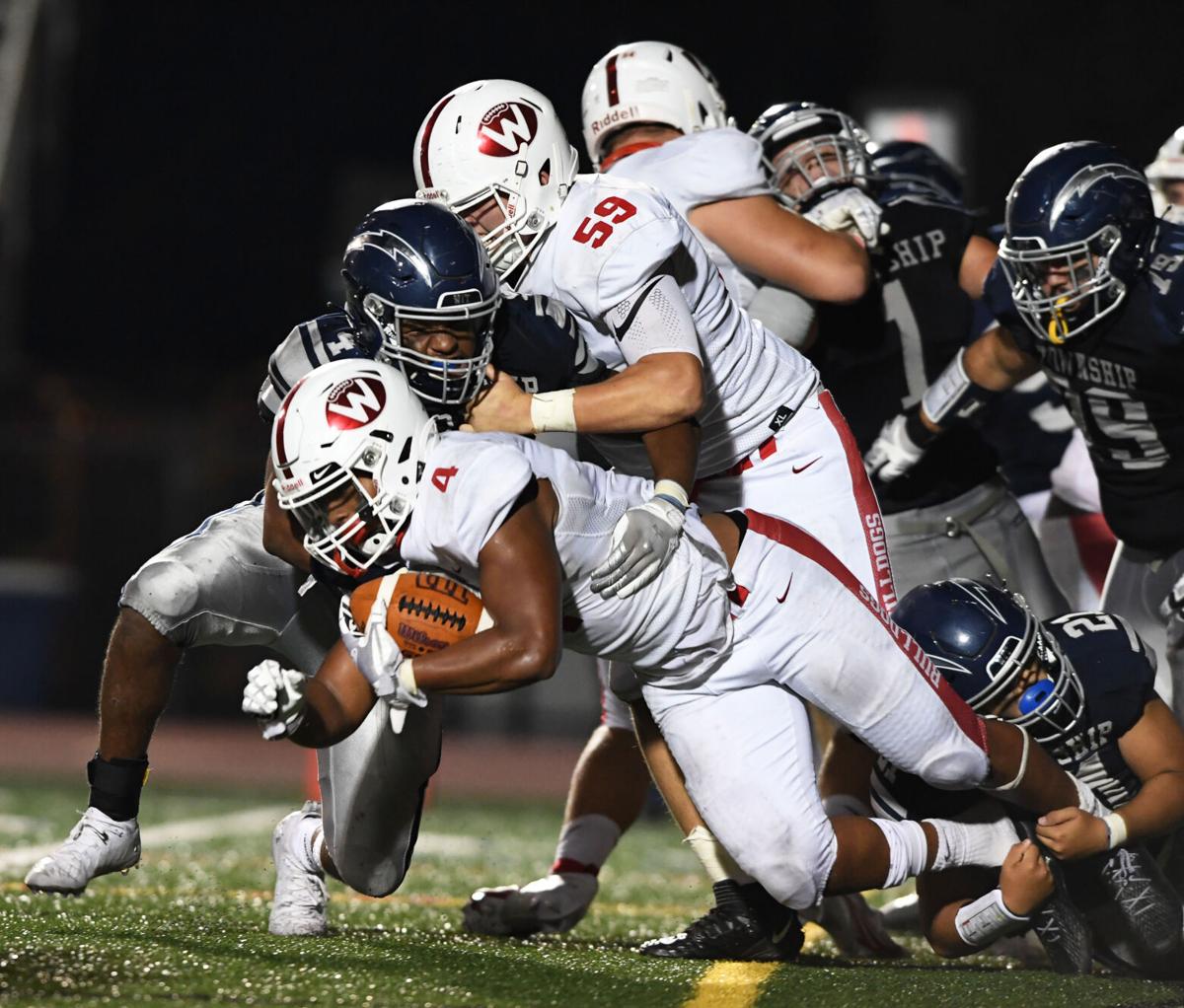 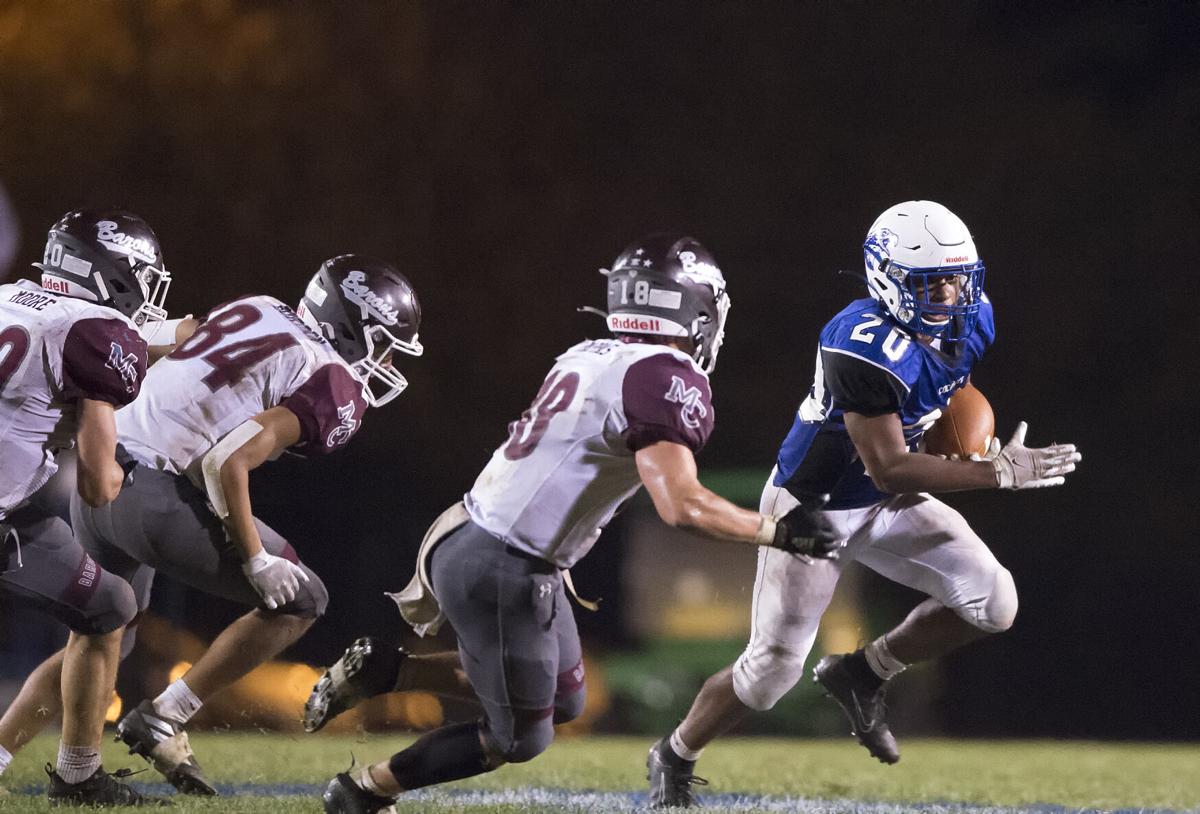 Cocalico's Anthony Bourassa (20) gets to the outside against Manheim Central during second-half action at Cocalico High School on Friday Sept. 25, 2020. 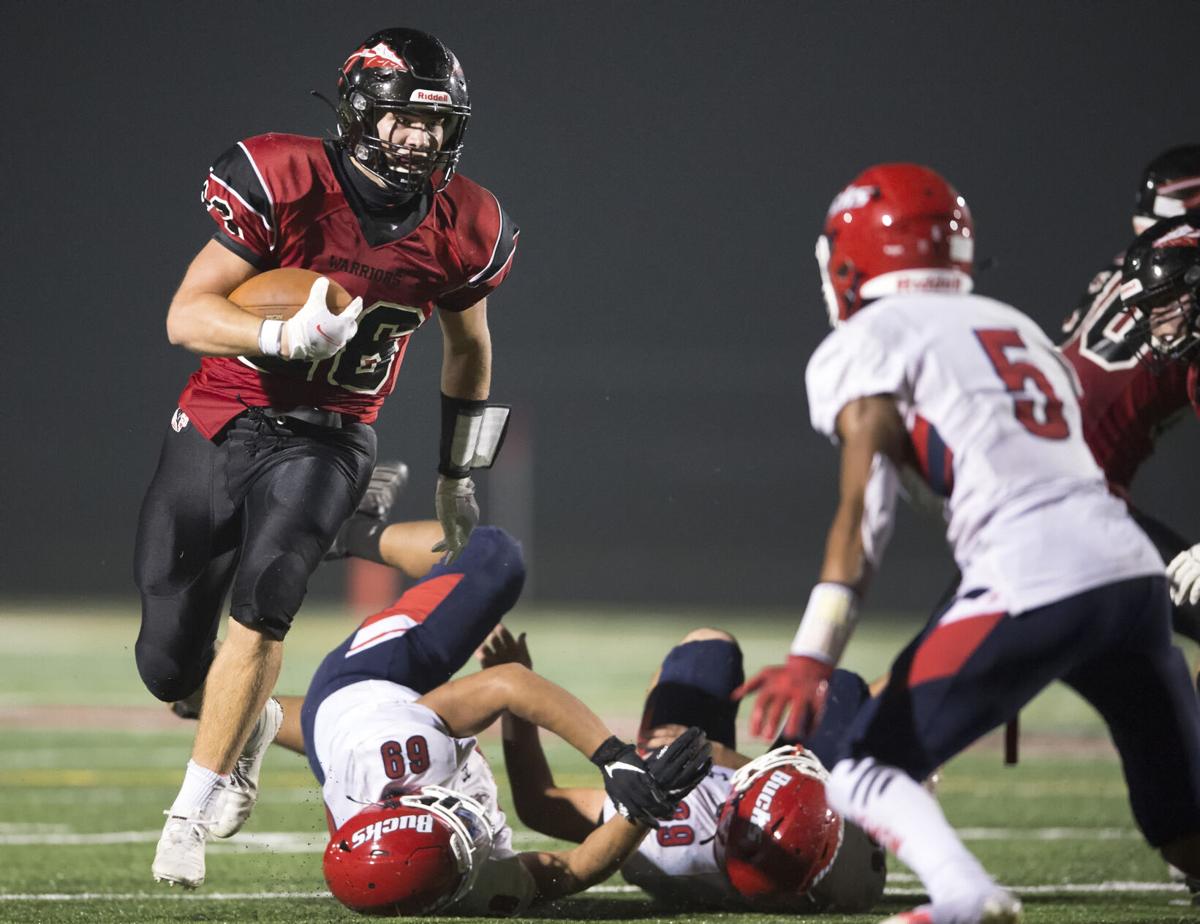 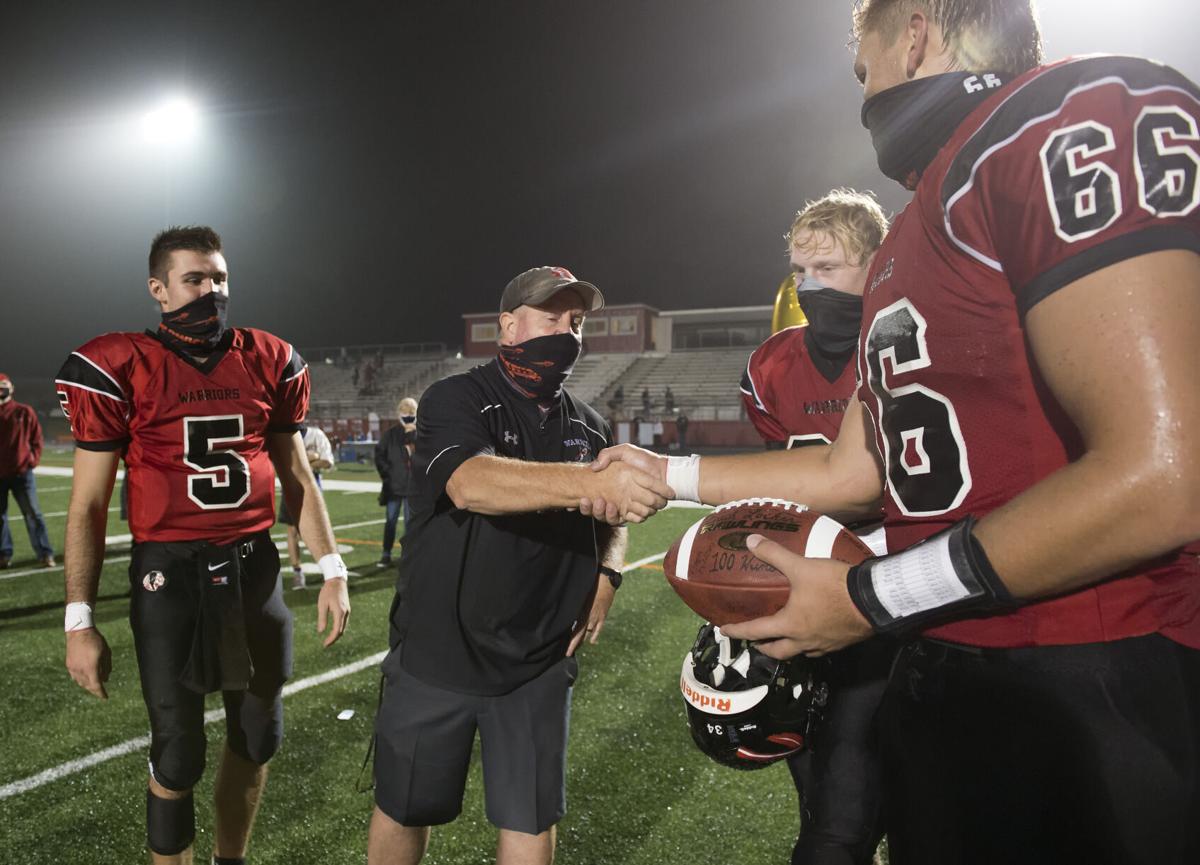 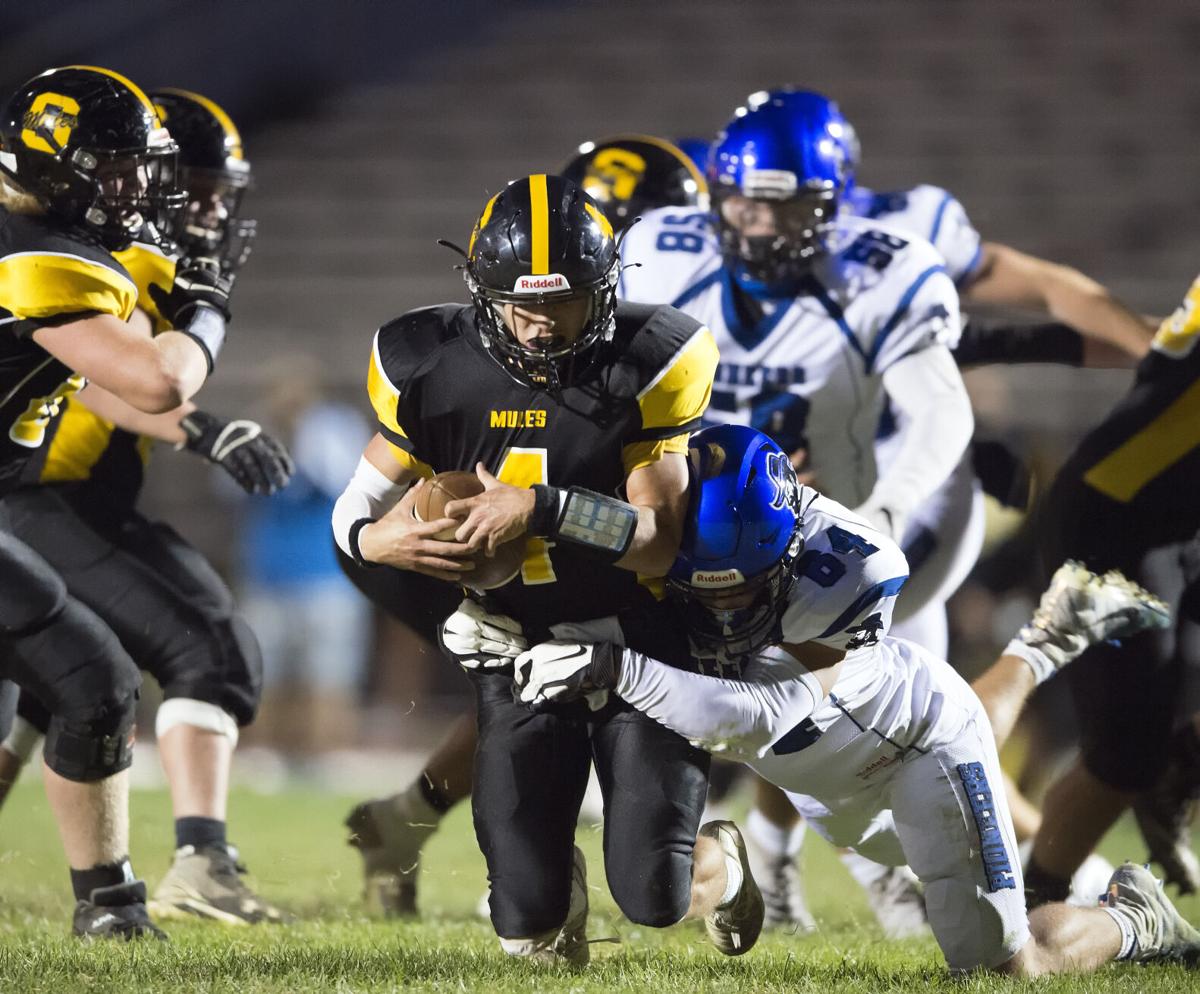 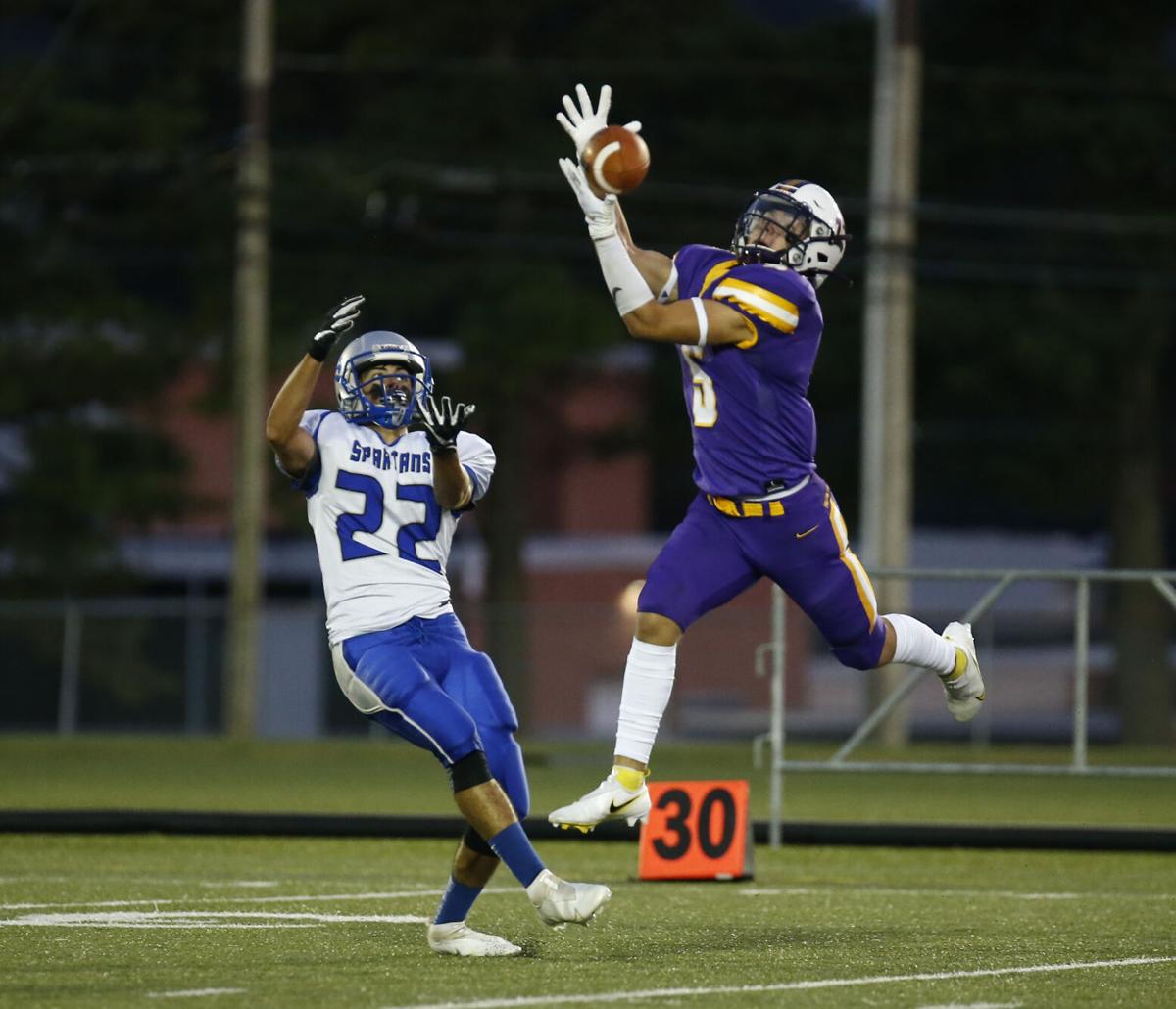 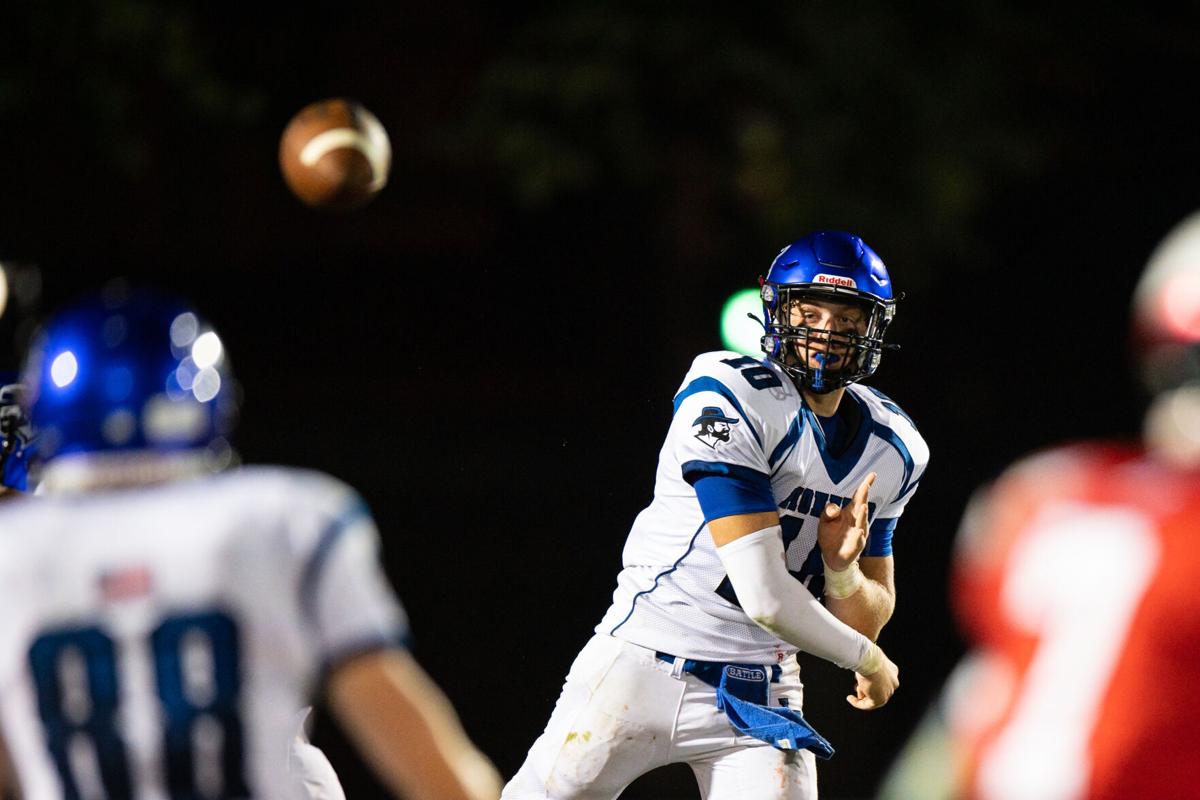 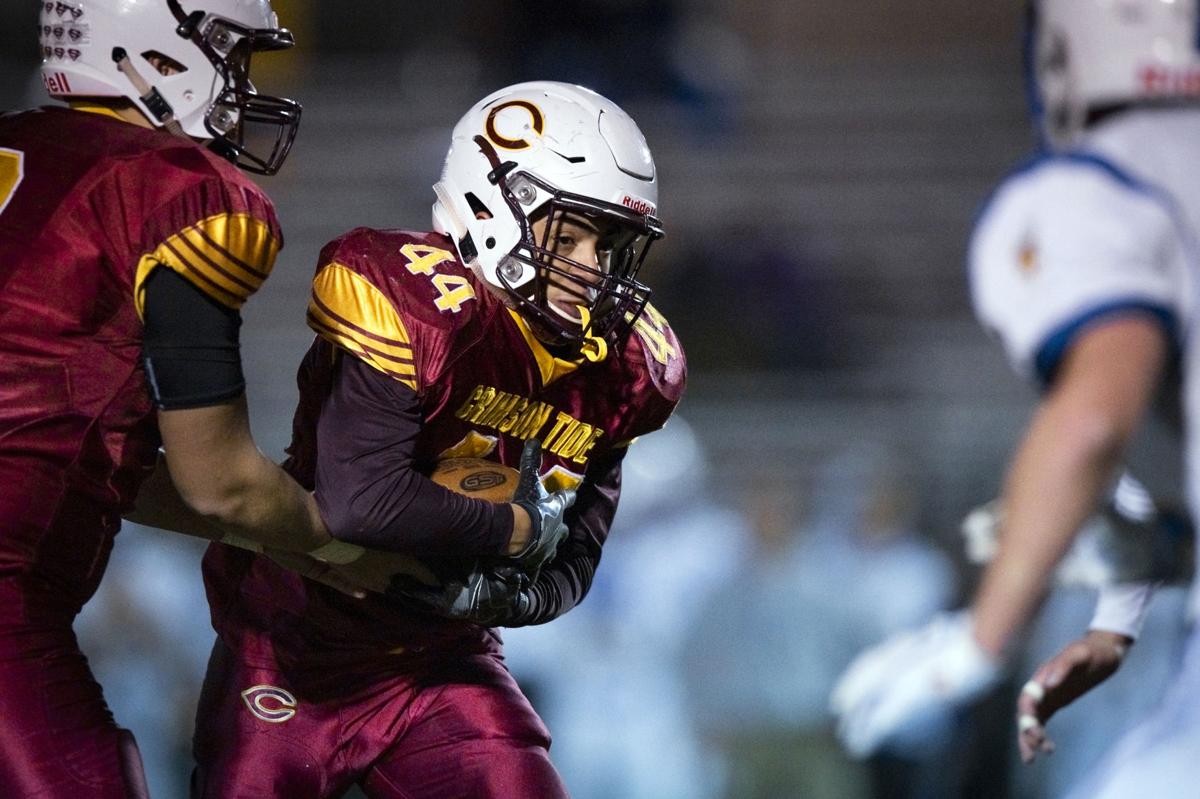 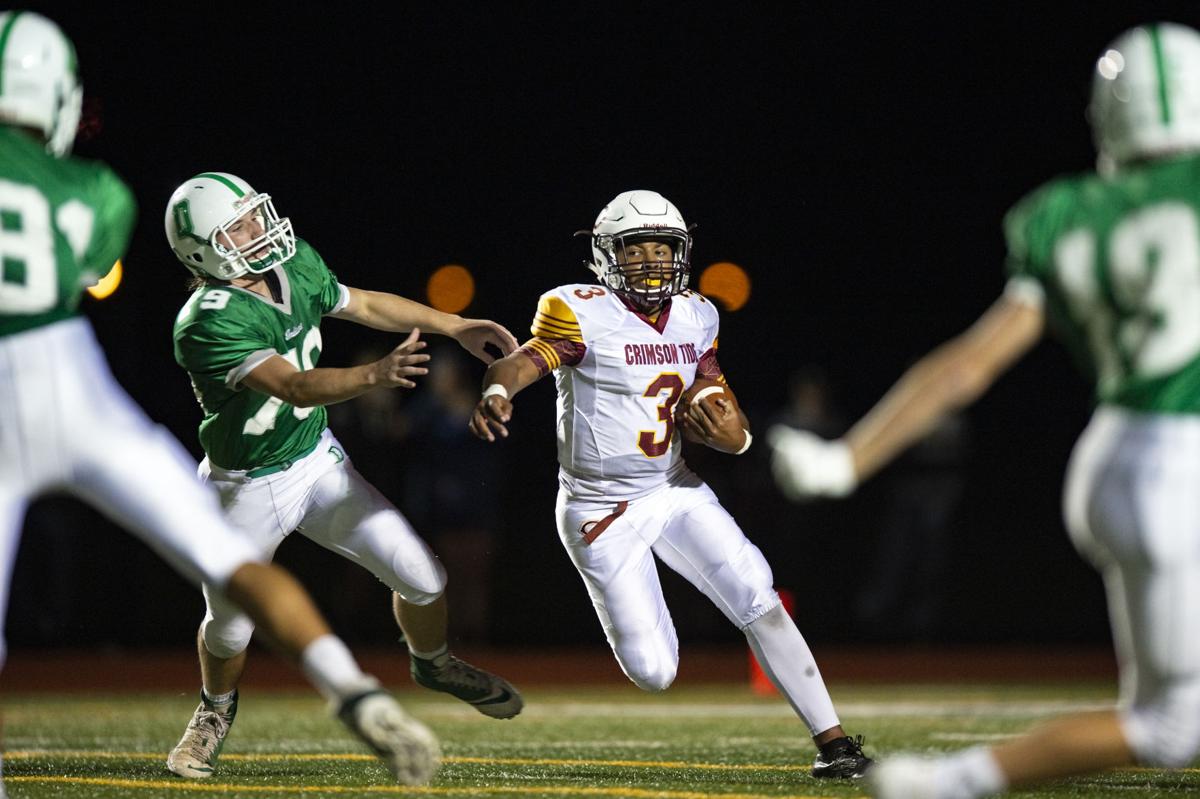 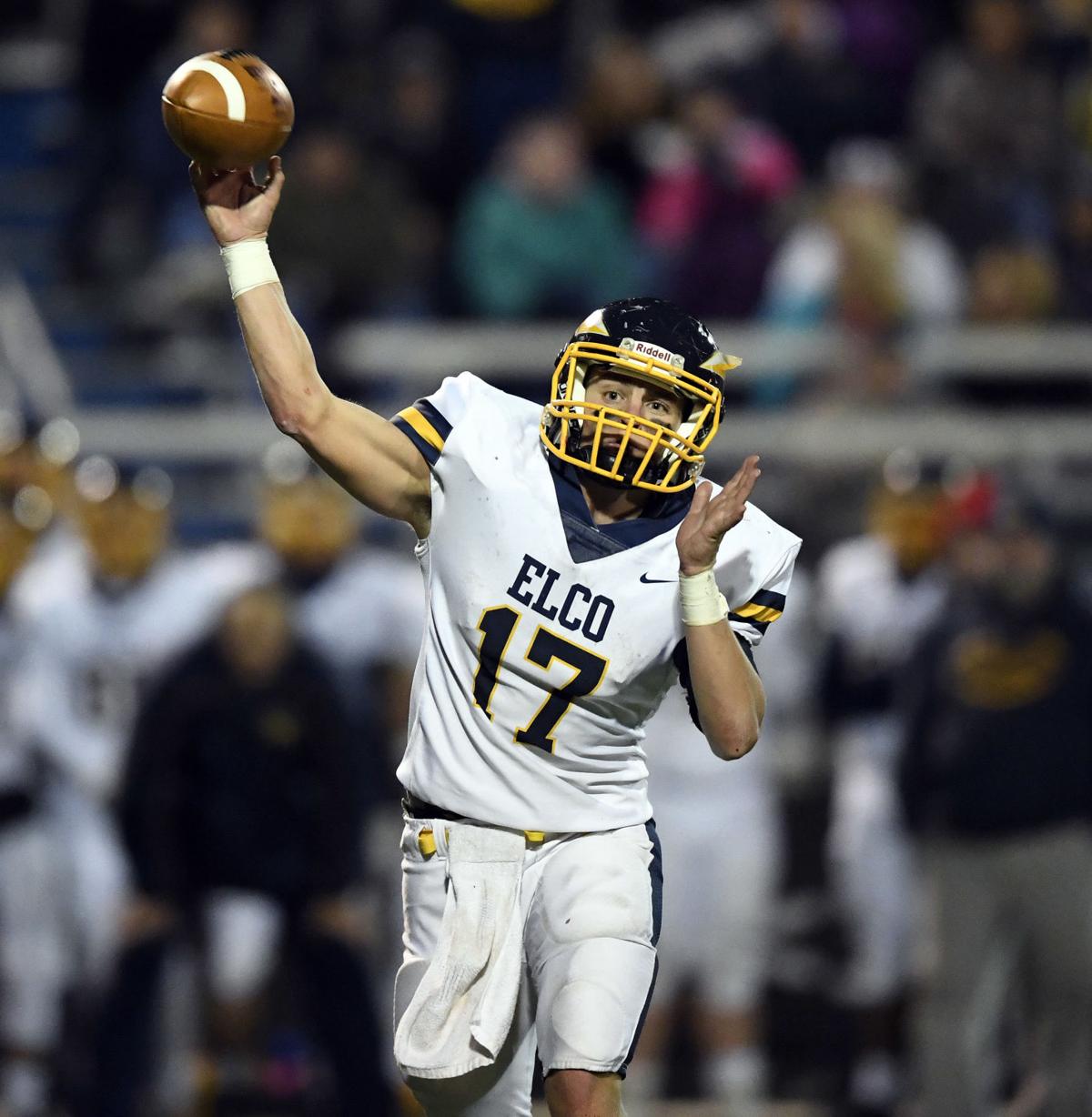 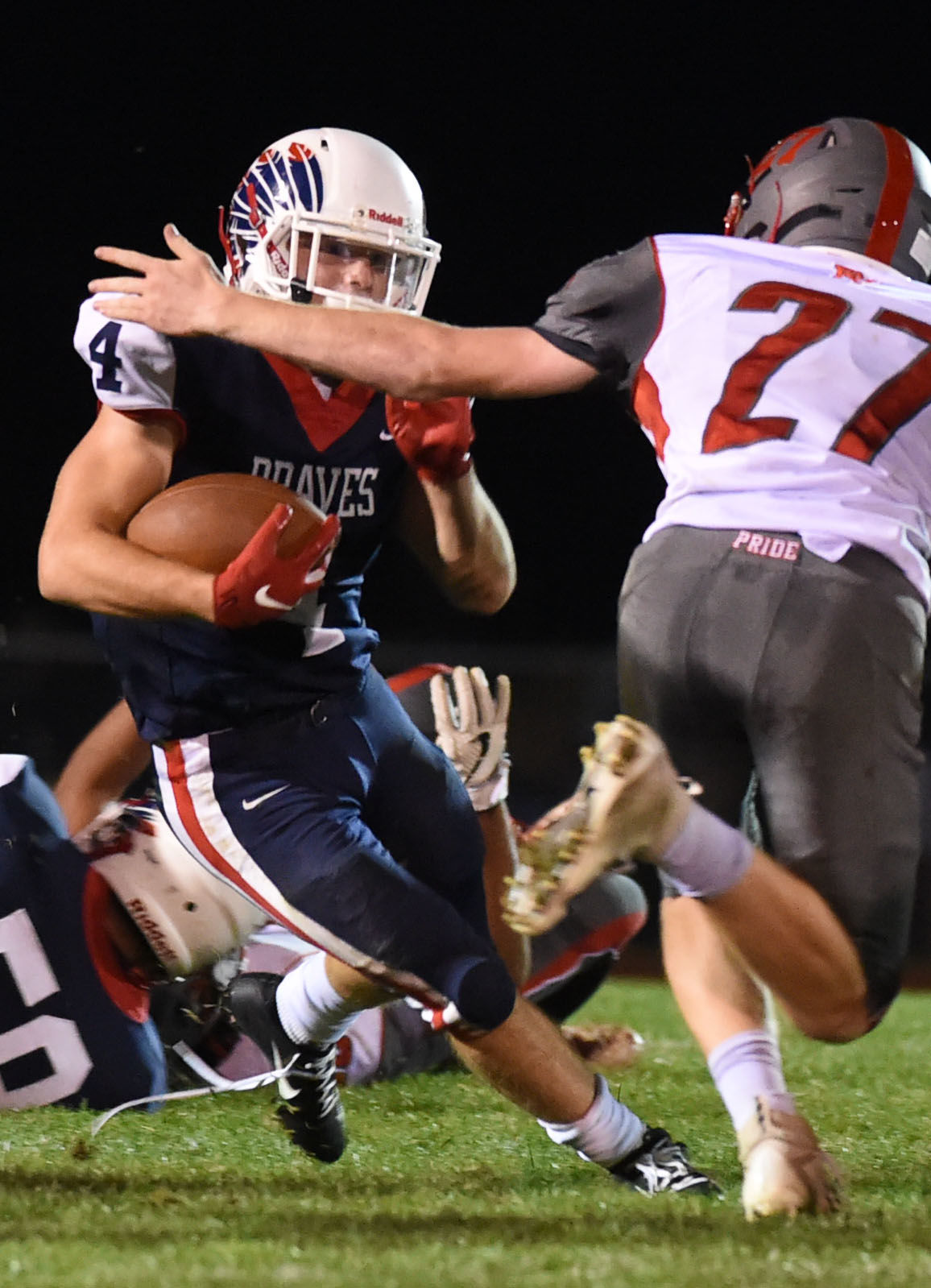 Octorara's Mike Trainor picks up some yardage as Pequea Valley's Andrew Weaver defends in the second half during the Battle of the Braves rivalry game at Octorara Area High School in Atglen, Friday, September 20, 2019.

Hempfield’s Tanner Hess runs the ball for a touchdown against McCaskey in an L-L League Section 1 game at Hempfield High School on Friday, Oct. 11, 2019.

Cocalico's Anthony Bourassa (20) gets to the outside against Manheim Central during second-half action at Cocalico High School on Friday Sept. 25, 2020.

Octorara's Mike Trainor picks up some yardage as Pequea Valley's Andrew Weaver defends in the second half during the Battle of the Braves rivalry game at Octorara Area High School in Atglen, Friday, September 20, 2019.

Here are the Helmet Sticker winners, doled out to the players who helped their teams earn a win in Week 2:

Cedar Crest: QB Chris Danz had a big night through the air in the Falcons’ 27-11 victory at McCaskey, clicking on 20 of 37 passes for 244 yards with a pair of TD strikes, as Cedar Crest picked up its first win this season.

Hempfield: Two stickers here … RB Tanner Hess ran wild in the Black Knights’ 40-7 win over rival Penn Manor, piling up 161 yards on 22 carries with a trio of TD bolts. And K Spencer Biscoe continued his hot start with two more field goals — from 37 and 35 yards out, respectively — plus four PAT boots as Hempfield captured the very first “Battle of 462” trophy. Biscoe is now 8 for 8 on PAT attempts with four field goals in two games for the Knights.

Wilson: With the Bulldogs’ playing minus their starting QB, a top-notch RB and their leading receiver, Jadyn Jones stepped in and stepped up for Wilson, bolting for 237 yards on 29 totes with a pair of TD rips, covering 65 and 15 yards, respectively, as the Bulldogs held off Manheim Township 31-28.

Cocalico: Anthony Bourassa proved that his Week 1 performance was no fluke, as the Eagles’ RB carved up Manheim Central. His stat line: 23 carries for 256 yards with a pair of first-quarter TD sprints — including a 75-yarder to get the party started — in Cocalico’s 35-19 dub over the Barons. In two games, Bourassa has 376 yards on 28 carries with four TD runs.

Solanco: Flexbone QB Mason St. Clair had a big night behind center in the Golden Mules’ 29-22 win over Elizabethtown. He put together 74 rushing yards on 15 carries with a pair of TD keepers, and St. Clair tossed a 47-yard TD pass in the fourth quarter to cap Solanco’s first win this season.

Warwick: Another game, another big night for Warriors' RB Colton Miller, who rumbled for 112 yards with four TD runs in Warwick's 41-0 whitewash over Conestoga Valley on Saturday night. That's seven TD bolts in two games for Miller, who had a trio of scoring runs last week vs. Penn Manor. He found the end zone early and often against the Buckskins. ... And this guy doesn't wear a helmet, but a big, shiny gold sticker for longtime Warwick skipper Bob Locker, who earned his 100th career victory when his Warriors topped CV.

Ephrata: Brock Boyer had a triple-threat night for the Mountaineers, who topped Garden Spot 21-10. On offense, Boyer caught three passes for 84 yards with a TD grab. And on defense, he was in on seven tackles with a pair of interceptions. Boyer also averaged 39.4 yards on five punts — with a long of a 60-yard boomer — helping the Mounts flip the field and pick up their first dub this season.

Donegal: Take a bow, Indians’ defenders. A sticker for every member of that group, which came up large in Donegal’s 13-7 win over Lancaster Catholic. It was the Indians’ first victory over the Crusaders in more than a decade. Donegal held Catholic to just 66 rushing yards, and in the second half, the Crusaders ran just 13 plays from scrimmage, and Donegal stuffed Catholic for minus-7 rushing yards after intermission. The Indians also forced a fumble and had an interception, on the way to improving to 2-0 this season.

Columbia: The Crimson Tide cruised to a 2-0 getaway compliments of a 44-23 win against Pequea Valley, and RB Steven Rivas and QB Robert Footman both played starring roles vs. the Braves: Rivas was tough to tackle on the ground; he rushed for 82 yards on eight carries with a pair of TD dives — both from a yard out — and Footman clicked on 13 of 17 throws for 255 yards with a pair of TD strikes as Columbia continued its sizzling start.

Elco: A 2-0 getaway for the Raiders, who dusted Annville-Cleona 40-10 thanks to some fancy footwork by QB Braden Bohannon and RB Jake Williams. Bohannon scooted for 141 yards on 13 attempts with four big TD keepers — covering 11, 15, 7 and 17 yards, respectively — and Williams, a freshman who is already making quite a splash this fall, went for 117 yards on just nine totes, including a 49-yard TD sprint.

Octorara: Don’t look now, but the Braves are 2-0 and feeling fine. QB Weston Stoltzfus and RB Mike Trainor both came up big in Octorara’s 39-6 W over Northern Lebanon: Stoltzfus went 9 for 15 through the air for 151 yards with a TD flip, and Trainor chewed up 135 yards on 19 carries with not one, not two but three TD runs, including a 35-yarder.

3. NEWS AND NOTES: Joey Gunzenhauser — do you think his teammates call him Joey Guns at the practice facility? — stepped in for the injured Miracle Wratto behind center and helped Ephrata top Garden Spot by a 21-10 finale. Gunzenhauser threw for 125 yards and a pair of touchdowns for the Mounts, who handed the Spartans their 26th setback in a row. We’ll see if Wratto gets back to the QB duties next week when Lebanon comes to Ephrata for a Section 3 tilt. … Four L-L League kickers boomed 40-plus-yard field goals in Week 2, including a familiar face, who already has his name in the league’s record books. Annville-Cleona’s Mac Plummer — who had a league-record 54-yarder last fall — drilled a 48-yarder Friday vs. Elco. Not to be outdone, Garden Spot’s Walker Martin knocked in a 46-yarder against Ephrata, and McCaskey’s Sam Hershey — back on the field after a quarantine protocol with the Red Tornado’s soccer team — hit a 42-yarder in his season debut vs. Cedar Crest. Warwick's Tanner Haines capped the spree on Saturday night with a 44-yarder vs. Conestoga Valley; it was quite the weekend for L-L League kickers, as Manheim Central's Logan Shull and Hempfield's Spencer Biscoe each drilled a pair of field goals on Friday. … This time, turnovers didn't sting Solanco. One week after coughing the football up five times in a season-opening loss against L-S, the Golden Mules gave up three more fumbles in Week 2 against Elizabethtown. But Solanco's offense saved the day, as QB Mason St. Clair accounted for three scores in the Mules' much-needed 29-22 triumph over da Bears. Solanco has eight turnovers in eight quarters this season; but the Mules will gladly take a 1-0 section record heading into next Friday's tilt against reigning D3-5A champ Cocalico in Quarryville, as Solanco closes out a 3-game home-stand to open the season. ... Speaking of Miracle Wratto, he’s in my top-5 favorite names for L-L League football 2020, joined by Annville-Cleona’s Phoenix Music, Elco’s Virdicio Chekanov, Conestoga Valley’s Booper Johnson and then a tie for fifth between Manheim Township’s Zeke Concepcion and Garden Spot’s Kupakwashe Agbokah. I’m probably missing some, but those are definitely among my favorites. Love the all-name-team guys. … Here’s an intriguing Week 3 game to circle: Octorara (2-0) at Columbia (2-0). We’ll preview that tilt, and all of next weekend’s matchups, over the next few days. Stay tuned.

What can you expect from Week 3 of L-L high school football game play?

Here are the leading rushers, passers and receivers through the Week 2 games …

The L-L League Quarterback Club has chosen its Players of Week 2. Here are their selections ...

Here are five individual matchups to watch when Lancaster-Lebanon League football teams hit the field Friday for their Week 3 games ...

Don’t look now, but the 2020 Lancaster-Lebanon League football season is picking up some steam, and after Friday’s games, the jigsaw puzzle th…