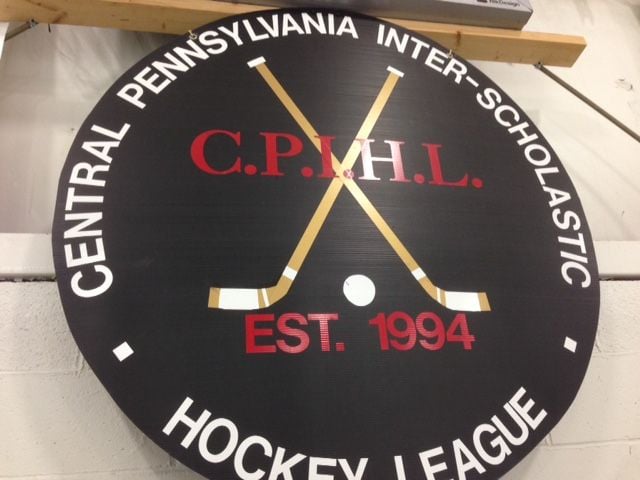 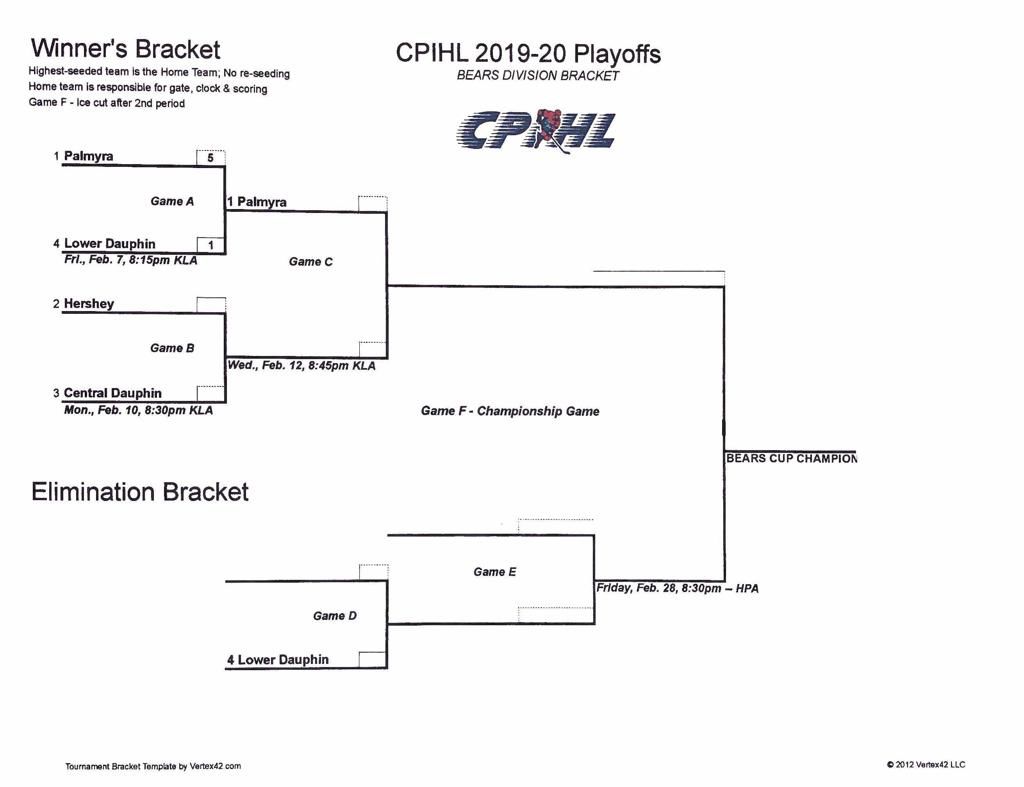 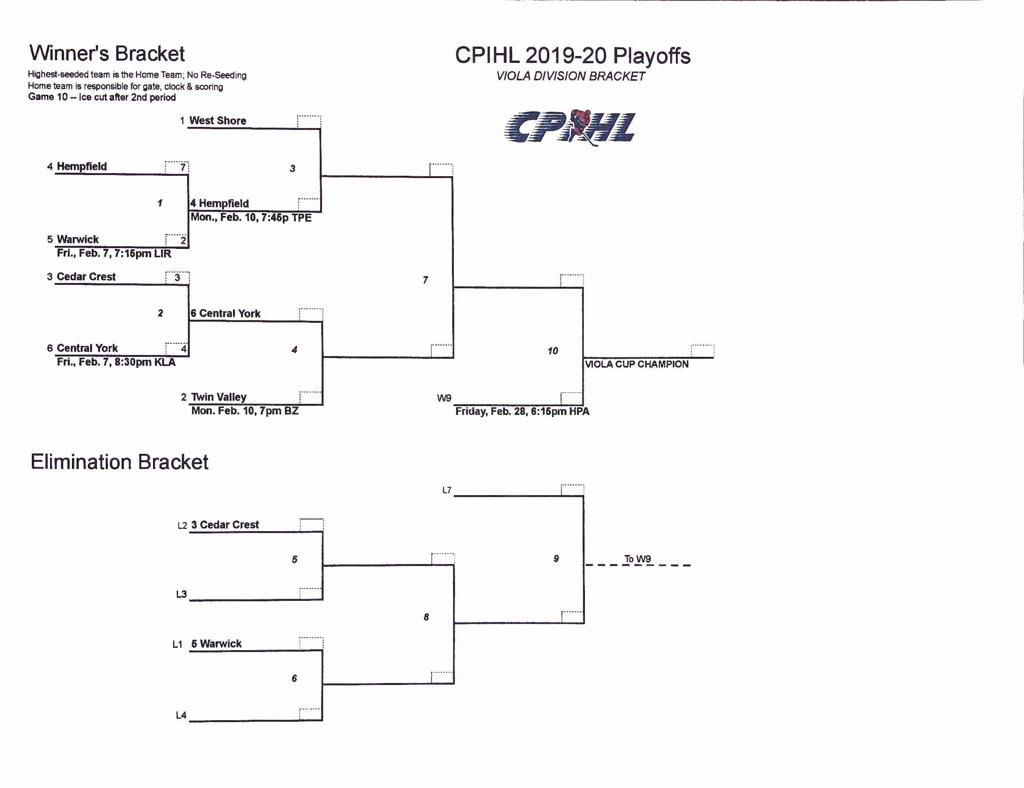 In the Bears Division, Hershey and Central Dauphin are set to meet for the chance to play Palmyra for a spot in the Bears Cup final.

In the Viola Division, West Shore and Twin Valley open the playoffs after a first-round bye, hosting Hempfield and Central York, respectively.

Following is a look at each of the matchups.

On the line: The winner advances to face top-seeded Palmyra, in a game schedueld for 8:45 p.m. Wednesday at Klick Lewis Arena, with a spot in the Bears Cup championship game on the line. The team that loses faces Lower Dauphin in an elimination game at a date, site and time to be determined.

Head-to-head: The teams split their three-game regular-season series. Hershey won the first game 5-4 Nov. 6. Central Dauphin won the most recent game 3-2 Jan. 3. In between, they split a 2-2 decision Dec. 2.

Notable: Hershey won last year's Bears Cup. Central Dauphin bowed out of last year's tournament with a 4-1 loss to Hershey in the elimination-bracket final ... Hershey won its final five regular-season games after back-to-back losses to Central Dauphin and Palmyra. Meanwhile, Central Dauphin only lost once in its final eight regular-season games with a 4-0 setback to Palmyra Jan. 24 ... Hershey scored the game's first goal en route to a win in the first meeting between the teams. In the latter two games, Central Dauphin scored the first goal. In the head-to-head meetings, the winning team never trailed. The Trojans overcame deficits of 1-0 and 2-1 to force the 2-2 tie ... The Trojans outshot the Rams in all three head-to-head games, and by a total of 71-60 ... Hershey scored the only power-play goal in the regular-season series between the two teams, going 1-for-8 overall. Meanwhile, the Rams' power play went 0-for-11.

Head-to-head: West Shore, with players from Red Land and Cedar Cliff, won the only regular-season meeting between the two teams, a 3-2 decision Dec. 13. The Black Knights, with players from Hempfield and Conestoga Valley, had led 1-0 and 2-1.

Players to watch: Red Land's Christian Holtzapple led West Shore with 22 goals during the regular season and tied for the team lead in points with 33. He scored the game-tying goal in the regular-season game against Hempfield. Elias Lountzis, the Black Knights' leading scorer, scored four goals and added an assist in Hempfield's 7-2 win over Warwick Friday. The Hempfield senior scored both Black Knight goals against West Shore during the regular season.

Goaltenders: Conestoga Valley's Joshua Griel made 12 shots on 14 shots he faced in Friday's playoff opener after starting all 18 games during the regular season with a 3.10 goals-against average and a .849 save percentage. West Shore's Alexander Rigling started all 17 contested games during the regular season, posting a 15-2-0 record with a 1.82 goals-against average ad a .918 save percentage.

Notable: West Shore locked down the No. 1 seed with six wins over its last seven games. The only loss during that stretch was a 4-3 setback to Cedar Crest Jan. 20. Hempfield's win Friday was the Black Knights' sixth over its last seven games. Hempfield lost an 8-7 decision to Warwick Jan. 26 ... Special teams played a part in West Shore's regular-season success, as the team boasted the Viola Division's top power play (28.1 percent) and its top penalty kill (91.4 percent). Meanwhile, Hempfield's power play ranked 12th (16.7 percent), and its penalty kill ranked fifth (82.7 percent). The Black Knights went 2-for-6 on the power play Friday ... Both teams went 1-2 in regular-season games decided by one goal ... West Shore is looking to return to the Viola Cup final after falling in last year's championhip game. Hempfield won the Viola Cup in 2017.

On the line: The winning team advances to face the Hampfield/West Shore winner while the losing team faces No. 5 Warwick in an elimination game. Dates, sites and times are to be determined.

Notable: Central York surged into the playoffs, winning five of its final six regular-season games. With wins in Wednesday's play-in game and in the first round Friday, the Panthers have won five in a row ... Twin Valley is makings its first CPIHL playoff appearance since joining the league last season ... Twin Valley's two-goal performance against Central York was the Raiders' second-lowest offensive output of the regular season. Twin Valley suffered a shutout loss to Hempfield Nov. 8 ... The Panthers have averaged five goals per game during their five-game winning streak. They averaged 4.64 goals per game prior to that ... Central York outshot Twin Valley 24-21 in their Jan. 27 meeting. Twin Valley went 0-2 during the regular season when outshot by its opponent.