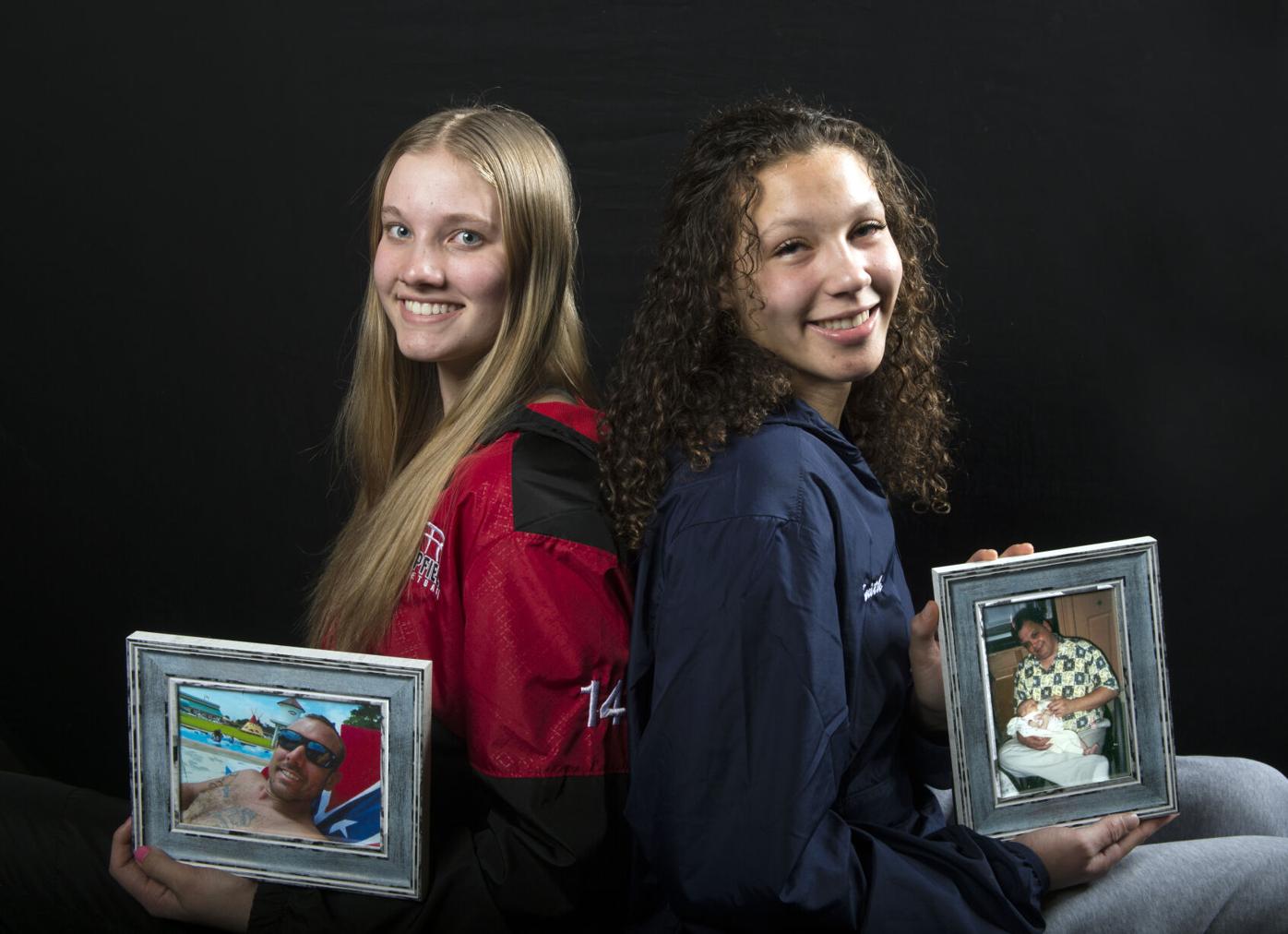 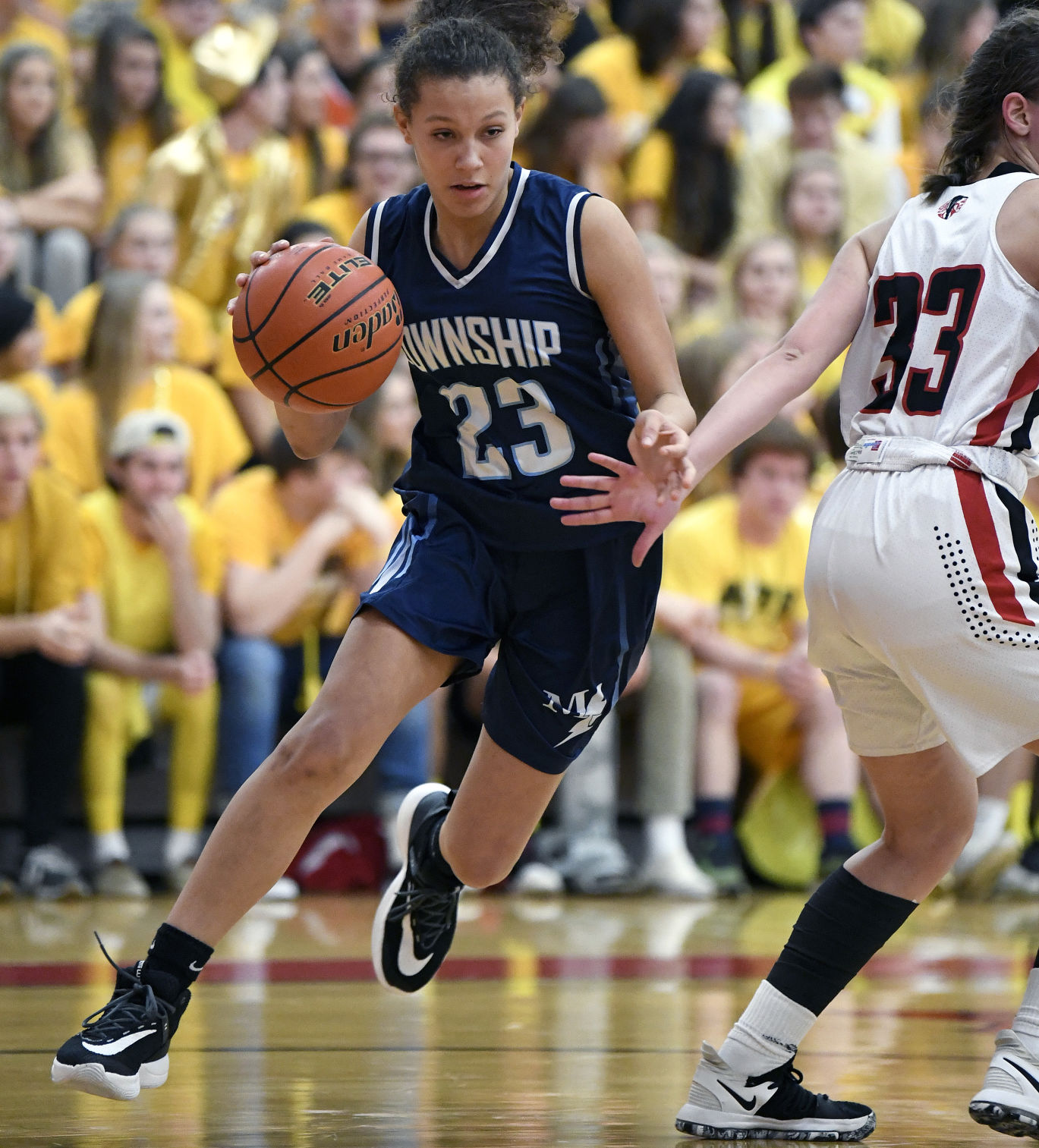 Manheim Township's Gianna Smith (23) drives to the basket against Warwick during second-half action of an L-L League Section 1 girls basketball game at Warwick High School in Lititz on Friday December 13, 2019.

Pick a sport — any sport — and the Black Knights and the Blue Streaks will duke it out until the bitter end to get the victory. It is the quintessential Lancaster-Lebanon League backyard Hatfield vs. McCoy feud.

Hempfield junior Ava Baer and Township junior Gianna Smith have forged a friendship through their basketball rivalry. Baer and Smith met while playing AAU hoops for the Nook Raiders, and they’ve become sidekicks.

The duo has plenty in common: Their love for basketball, for starters. Making good grades and keeping up in school and socially during a pandemic. And, sadly, this: Baer and Smith both recently lost their dads.

Baer’s dad, Steve, a soccer standout during his high school days, died unexpectedly in 2018, during Baer’s freshman basketball season at Hempfield. Smith’s dad, Doug, passed in 2016 because of heart issues when Smith was a seventh-grader, coming up through Township’s basketball and soccer pipelines.

Baer and Smith, AAU teammates, fast friends and yes, bitter rivals on the basketball court for a couple of games a year, are helping each other get through this stage of their young lives. And that’s a great thing.

“There’s definitely a bigger connection there with us now,” Smith said of her friendship with Baer. “We can relate to each other more for sure. It’s nice knowing someone else in my life is going through this, and that she’s my friend. If I ever need anything, I know I can go to her and talk about it.”

Baer and Smith have both become key cogs on their respective squads.

Baer is an instant-offense bench player for coach Kendra Merrifield’s club; she’s scoring at 5.6 clip with five 3-pointers, and she’s been a clutch shooter in Hempfield’s rotation, as the Knights are out to defend their Section One championship from last winter.

Meanwhile, Smith cracked coach Sean Burkhart’s starting lineup as a sophomore, and she’s at 5.8 points so far this season, while already earning the reputation as one of the top rebounders and shot-blockers in the league while repping the Streaks.

Baer and Smith both have plenty of motivation to succeed, get better and help their teams win: To honor their dad’s memories and for them, in turn, supporting their daughters growing up.

“He was one of my biggest supporters,” Baer said about her late father. “And it’s the same with Gianna. We both have something that pushes us to be better. That’s my thing: Do better for him.”

Baer said her dad was always there to offer up basketball and soccer pointers and to watch all of her games.

“I can’t remember him ever not being there,” she said. “He was always telling me what I needed to work on. I remember we’d randomly stop at parks and do headers with soccer balls. Basketball has become my motivation now. Sometimes I get frustrated when things aren’t going my way, and I just break down. I know I have something to prove.”

Playing for her dad has been a motivating force. Ditto for Smith.

“Even now,” Smith said, “if I have a bad game, I feel like I’m letting him down. But when I have a good game … yeah, I did that for him. He always pushed me to be better, which was a great thing. I’ll always appreciate those memories.”

Smith fondly remembers watching March Madness basketball games and Ohio State football games with her dad, who was a real sports fanatic, she said. It made for a special, unforgettable father-daughter bond, putting Smith on the path to becoming a standout multi-sport athlete at Township.

“I know my dad is watching me,” Baer said. “Anything I did always made him proud. When I made varsity last year, I know he would have been so proud of me for doing that. He was a great athlete, and he wanted to see me become a great athlete.”

Steve Baer and Doug Smith would both be very proud of the athletes — and, more importantly, the young women — their daughters are becoming. Sometimes friendship and just lending an ear or a helping hand trumps a rivalry.

They came up through their respective prep pipelines with plenty of fanfare. And when Ephrat…

Mercy Ademusayo hasn’t been home since the middle of 2019.

Too busy shoveling snow out of your driveway this weekend to get your dose of LNP|LancasterOnline? Not to worry, we got you covered.

Another week and another peek at the District 3 girls basketball races, as the Feb. 27 deadline date to accumulate power points quickly approaches.

Not even sure where to start after Tuesday’s results, as all kinds of heck is breaking loose in L-L League girls basketball circles. The Secti…

In absolute crunch time, with the game on the line and the clock winding down, when Hempfield needed a big bucket Thursday night, the Black Kn…

It’s too bad the Lancaster-Lebanon League isn’t counting its crossover games toward section records this season, because the Section 1 and Sec…

Believe it or not, we’ve reached the final full week of Lancaster-Lebanon League girls basketball action, as this truncated season filled with…

It’s the final full week of games in L-L League girls basketball action, so the final push for District 3 power points is very much on.

Already out of the Lancaster-Lebanon League Section One race and teetering around the cut-line in the District Three Class 6A power ratings, M…

The finish line is upon us, as Lancaster-Lebanon League girls basketball teams have reached the tape, and Monday night signals the end of head…

The District 3 deadline — Saturday — is now staring everyone directly in the face. So this is a mega important week for the race for power poi…

The Lancaster-Lebanon League girls basketball playoffs have reached the Final Four phase, with a pair of semifinal games featuring a four-pack…

There is a lot going on in L-L League girls basketball circles. The league semifinals are set, with those two showdown games set to tip-off on…

When Jayla Rivera hit back-to-back 3-pointers, including a half-court prayer that was answered off the glass at the buzzer to end the first ha…

Lancaster Catholic’s girls basketball team will go for some rarefied air on Saturday, when the Crusaders take direct aim on their fourth Lanca…

Breaking down the District 3 girls basketball playoff brackets, with plenty of news, notes, facts, stats, links and predictions, with this fri…

This time, it was Hempfield that couldn’t slam the door.