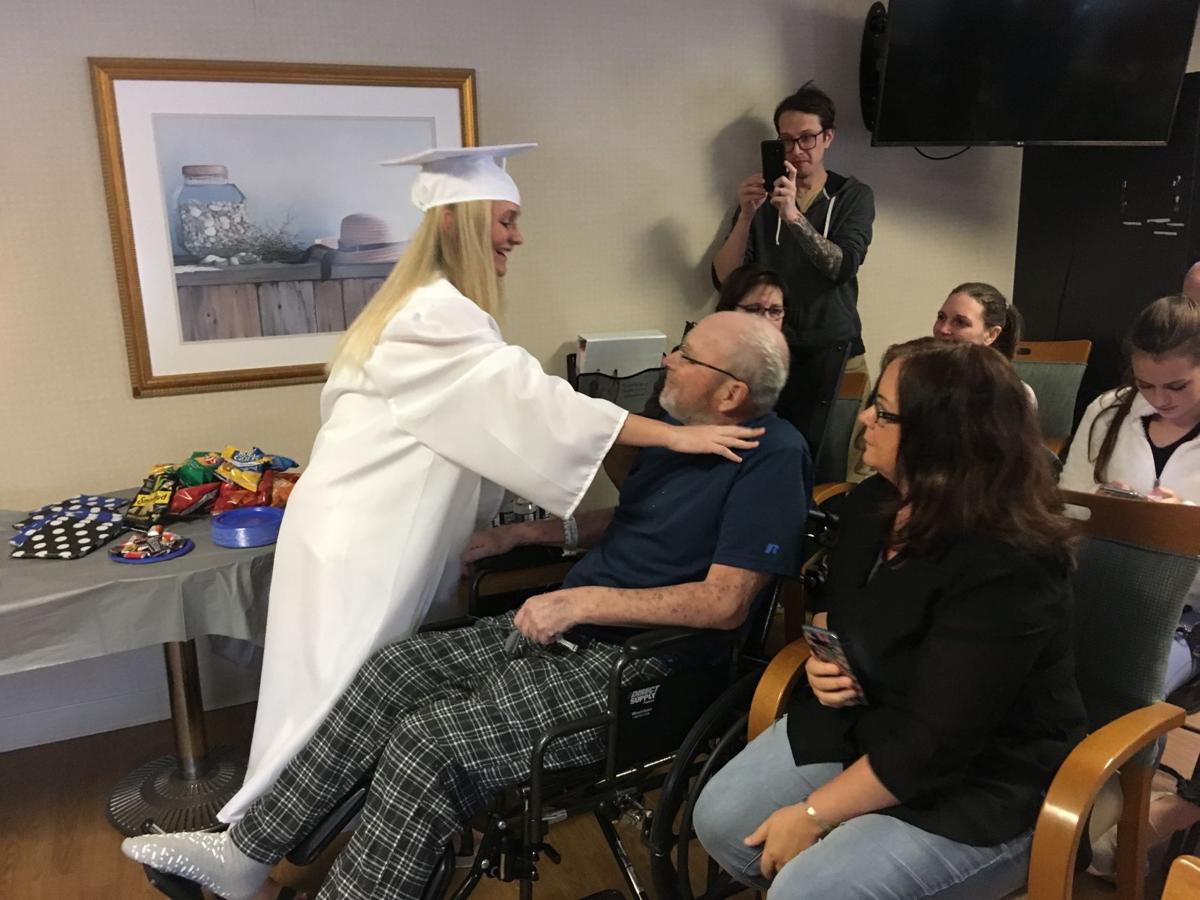 Wanting her father, Robert, to see her graduate before he died, Cedar Crest senior Maria Brandt, left, held an impromptu high school graduation ceremony in mid-January for him at HCR ManorCare Health Services in Lebanon. Robert Brandt died a week later on Jan. 20, 2020, after a long bout with cancer. 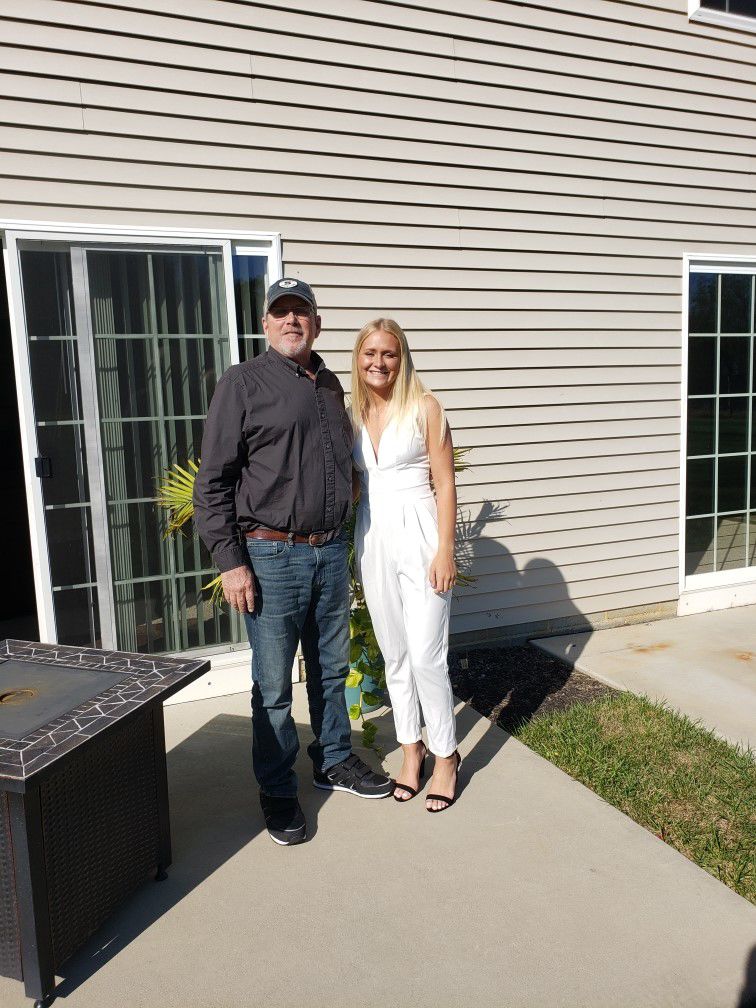 Maria Brandt, right, with father Robert Brandt, who died Jan. 20, 2020, after a long bout with cancer. 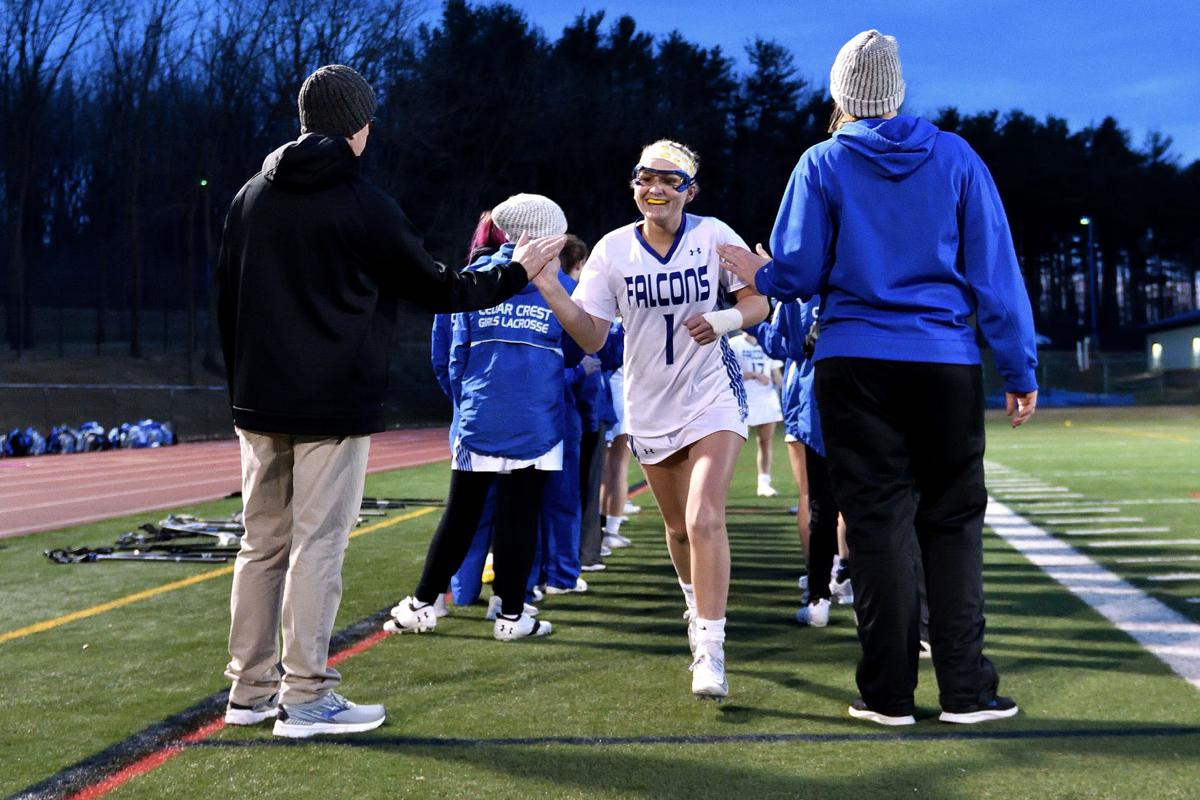 Cedar Crest midfielder Maria Brandt is introduced before a girls lacrosse game against Hempfield on March 28, 2019.

Recent Cedar Crest High School graduate Maria Brandt and her mother, Barbara, were hoping to spend this Father’s Day weekend at Lake George, New York. It was one of the favorite places her dad, Robert, liked to fish.

But due to conflicts with Maria’s schedule, they’ll instead be staying home.

“We have family coming down from New York,” she said. “We’re just going to have dinner.”

Sunday will be Brandt’s first Father’s Day without her dad. Robert Brandt died Jan. 20 after a long bout with cancer. He was 61.

A starting midfielder for the Cedar Crest girls lacrosse team from her freshman through junior years, Maria Brandt wore jersey No. 1 for her dad.

“My dad would always call me number one,” Brandt said.

Robert Brandt never missed a game. And he taught his daughter, the youngest of his three children, how to be tough as she played through broken hand injuries in her sophomore and junior seasons.

He also instilled in her the value of hard work. A Palmyra alum, Robert Brandt taught himself how to draw blueprints and eventually started his own business, Brandt & Sons Construction, awaking at 5 o’clock each morning.

“If it was 7 o’clock and I was still sleeping, he would wake me up,” Maria Brandt recalled. “He didn’t want to waste a day.”

“My dad really loved our country,” Maria Brandt said. “He’s the one who made me want to serve our country.”

'Dedicate my games to him'

After the death of her father, Brandt put her plans to enter the Army on hold.

“I just wanted to be there for my mom,” Brandt said. “When this all happened, I just didn’t want to leave her and go halfway around the world.”

Still, she felt her father would have wanted her to make the most of her time. So Brandt instead thought about college, and perhaps playing lacrosse at the next level.

The only problem was, Brandt came to that realization at probably the latest point she could have in terms of college recruitment for the sport. Plus, she had rebuffed interest from college coaches who had seen her play on the club circuit in previous summers.

“I was getting college looks,” she said. “But I told (college coaches) I wasn’t interested because I wanted to go into the military.”

Brandt reached out to Cedar Crest girls lacrosse coach Anthony Sinico, who immediately spliced together a highlight reel on her behalf and sent it to coaches at NCAA Division II programs Bloomsburg, East Stroudsburg and Millersville. Sinico also informed Brandt of a lacrosse camp for high school lacrosse players to be held at Bloomsburg the weekend of Feb. 1. Sinco’s daughter, Cedar Crest junior Isabella Sinico, had already signed up.

Perhaps, he suggested, Brandt should give it a shot, too.

“It was snowing,” Anthony Sinico recalled of the Bloomsburg camp. “It was an ugly, miserable day. But Maria just stood out. She looked like a woman playing with girls. That’s how good she looked.”

“The style of game that I like to play is a fast and aggressive one,” Bloomsburg women’s lacrosse coach Shannon Hertz said. “So when I saw (Brandt) play I knew she was someone who definitely can help make our team better.”

Hertz called Brandt the next day, invited her for a college visit the next week and shortly thereafter offered Brandt a roster spot for 2021.

Brandt was hoping to dedicate her senior season at Cedar Crest to her father this past spring. The COVID-19 pandemic took that away.

“I’m very happy I still have college to dedicate my games to him (my dad),” Brandt said.

'He wanted to see me graduate'

One summer evening in 2018, doing yardwork behind the family’s home, Robert Brandt noticed that his left foot had become swollen.

“He thought it was a bee sting,” Maria Brandt recalled. “Another day went by. His foot was still swollen. I made him go to the doctor.”

Five years earlier, Robert Brandt had beaten colon cancer. But now, the cancer had returned in his lymph nodes, causing his foot to swell. It had already advanced to Stage Three. And for the next year, Robert Brandt fought.

But the cancer wouldn’t quit. By the end of 2019, doctors at Wellspan Sechler Family Cancer Center in Lebanon County had run out of options.

“He wanted to see me graduate,” Maria Brandt said of her father. “But the doctors told us we didn’t have much longer.”

So the senior approached Cedar Crest High School administrators with a request: Would it be possible to hold an improvised graduation ceremony in front of her father at HCR ManorCare Health Services in Lebanon?

No one knew it at the time, but in the coming months, COVID-19 would take away standard high school graduation ceremonies for those in the Class of 2020.

“Now that I look back on it, I feel very thankful,” Maria Brandt said. “I’m not having a good 2020. I don’t have a senior year. My dad passed away. I was just blessed with being able to have a graduation. I think that’s kind of cool.”

Over the past decade, I have questioned everything — my perspective, my biases, my insecurities, my friendships, my loyalties, my silence, my voice, my prickliness, my faith, my career. But I have never questioned building a home with the man who delivers dad jokes with the same alacrity as he does a lecture on photosynthesis.