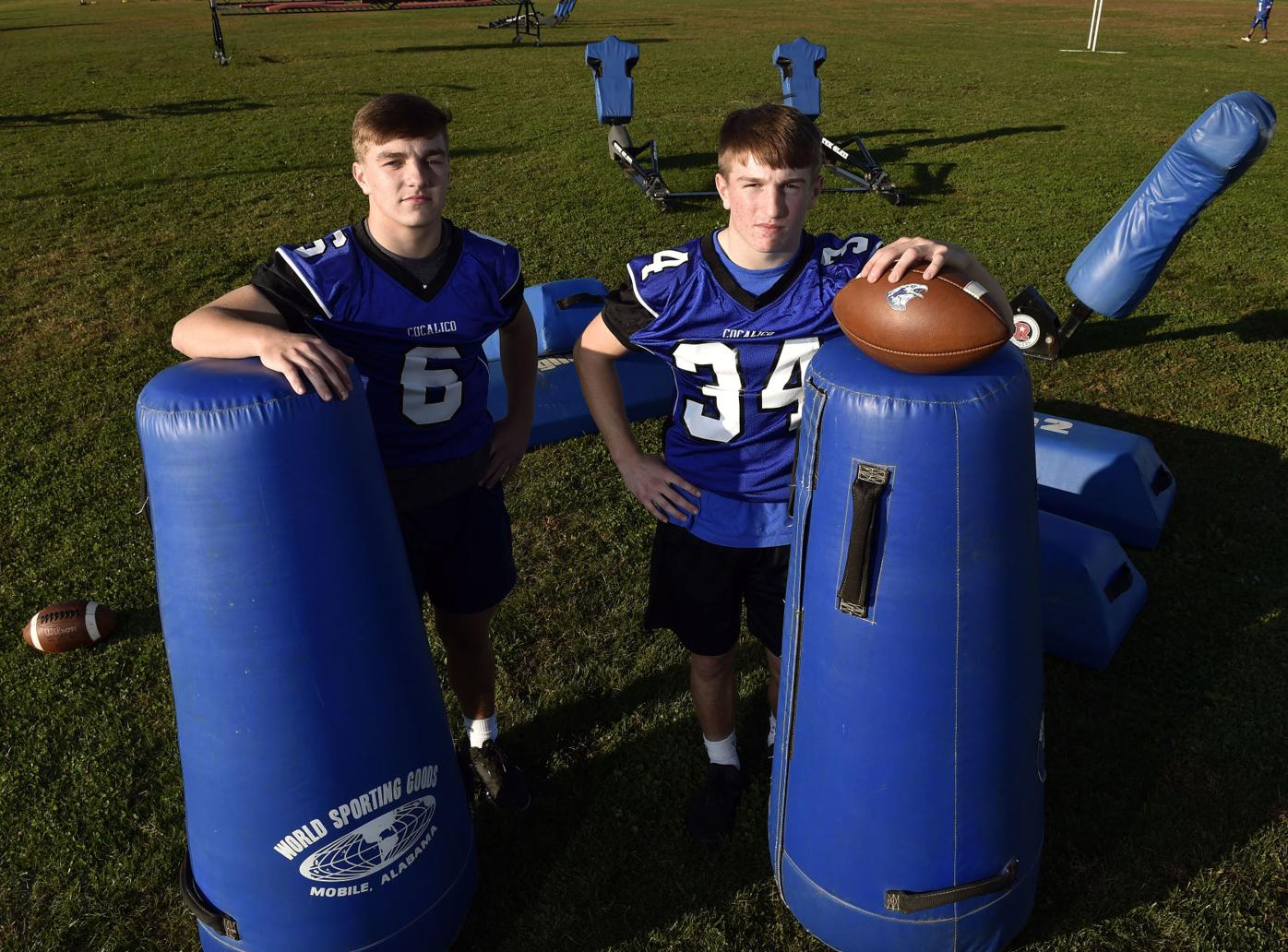 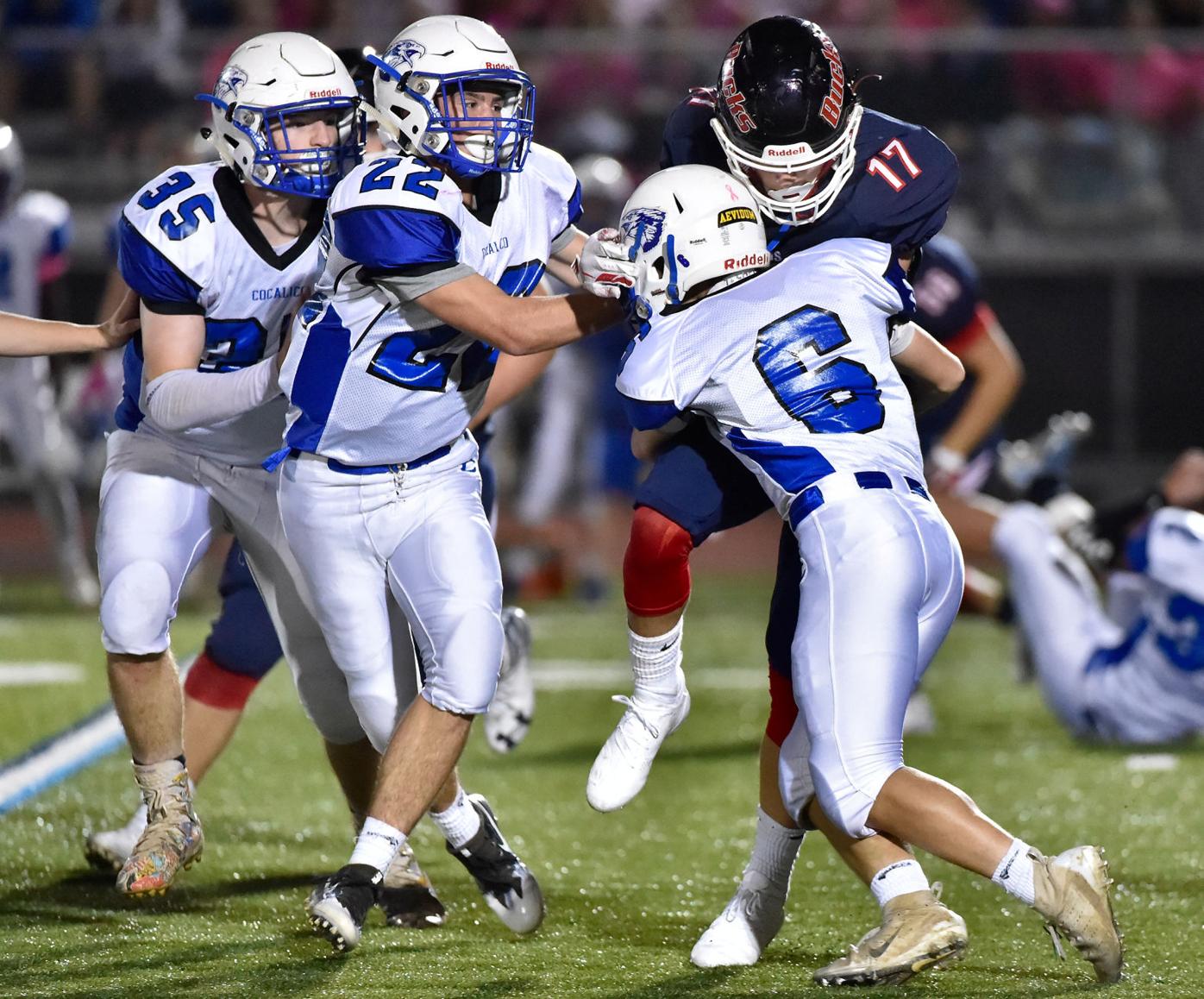 Sometimes not fitting the mold is a good thing.

When you think about linebackers, what do you think of? Brawny, strapping, athletic types, with big wingspans and muscles popping out from under their shoulder pads.

Luke Angstadt and Tyler Angstadt don’t fit that mold. Luke goes 5-foot-6 and 165 pounds. Tyler is 5-6, 140. But wind them up and put them at linebacker, and they are tackling machines.

Luke, a sophomore, is a starting middle linebacker, and Tyler, a freshman, is a starting weak-side linebacker for Cocalico. Luke got some playing time last fall in his ninth-grade season, at linebacker and on special teams. Tyler was in coach Dave Gingrich’s starting lineup in Game One, Week One this season against Conrad Weiser — lined up opposite his big brother, spearheading the Eagles’ defensive unit.

“I remember horsing around in the backyard, and football was just something fun to do,” Tyler said. “Now we’re part of a team.”

Another tough-as-nails Cocalico outfit, which heads into Friday’s Section Two clash at home against Lampeter-Strasburg at 7-2, in a tie for second place with the Pioneers, and at No. 2 in the latest District Three Class 5A power rankings.

The Angstadt boys have had a lot to do with that, stepping in as full-time starting linebackers and helping the Eagles’ defense put the clamps on opposing offenses.

“It’s awesome to look over and see that he’s right there, knowing we’ve grown up together and now we’re here,” Luke said. “We were playing in Midgets like yesterday. And now we’re here, on the high school team starting together as a sophomore and a freshman.”

Not only starting, but thriving.

Noah Palm, Cocalico’s hard-hitting all-state senior safety, leads the team with 60 tackles. Up next is Tyler, with 58 sticks, and Luke is third with 56 stops. The Angstadt boys share the team lead with 41 assisted hits apiece, while Luke has a pair of tackles for losses, and Tyler has four sticks for losses plus a forced fumble.

It just goes to show that once the game starts, it doesn’t really matter what grade you’re in, how old you are, or how much you weigh soaking wet. If you can play, you can play. And that's exactly why the Angstadt brothers are on the field.

“Both of them are even keel,” Gingrich said. “They don’t get very excited. They don’t get too worked up. They don’t take themselves too seriously. They just go about their business. They’ve turned out to be key players on our team.”

Cocalico has needed them. A spat of injuries caused Gingrich and his lieutenants to tweak here and tweak there. After getting some snaps last year, Luke earned a starting spot coming out of camp. And when the season-opener back in August rolled around, Tyler, before he even took his first high school class, also found himself in the starting lineup.

“A pretty special moment,” Tyler said. “But they have me in there for a reason, so I’m just doing my job.”

Gingrich said he has no qualms about starting a freshman, even at an important spot like linebacker. He said the only other ninth-grader he recalls starting in the first game of the season right out of the chute was Palm, who started at safety in his prep debut back in 2016.

“Tyler is an impressive kid,” Gingrich said. “He has really good football sense and a good work ethic. He does what he’s coached to do. You don’t have to tell him many times that this is what you’re reading here and this is your key there. He picks things up pretty quickly. He’s a tough kid.”

They got it from their dad, Jeff, who played football for Quakertown.

Jeff and his wife, Heather, settled in Reamstown. And now their sons are already carving out their own niche on the football field — as underclassmen.

“I started playing in sixth grade,” Luke said. “I liked tackling and hitting people. It made me tougher growing up. Tyler, too. He’s always kind of followed what I’ve done.”

All the way to earning starting spots for Cocalico, as 10th and ninth graders.

“I’ve worked really hard, so I’m definitely proud,” Tyler said. “Mentally I’ve worked hard to study our defense and to get better at it. The hard work is paying off. I’m proud of how I’ve displayed what I can do. I definitely didn’t think I’d be up there this high on the tackle chart already, but here I am.”

Here they are. And with the Angstadt brothers set for several more seasons each in Cocalico’s program, the Eagles’ defense is in good hands moving forward.

The final week of the high school football regular season has arrived. And with that comes pressure for some teams for potential District Thre…

A running list of top special teams performances, defensive plays and other outstanding individual efforts in L-L League football for the 2019…

Eight Lancaster-Lebanon League football teams will be in District Three playoff action this weekend across seven total games. Of those seven g…

And then there were three.

A running list of top special teams performances, defensive plays and other outstanding individual efforts in L-L League football for the 2019…

With Thanksgiving in the rearview mirror, and with the winter sports season on-deck, there are still two Lancaster-Lebanon League football tea…

Austin Vang is not the biggest kid around.

There will be plenty of top returning talent on the defensive side of the ball this fall, when the 2020 Lancaster-Lebanon League football seas…

Previewing the L-L League Section 2 teams, which are listed alphabetically ...