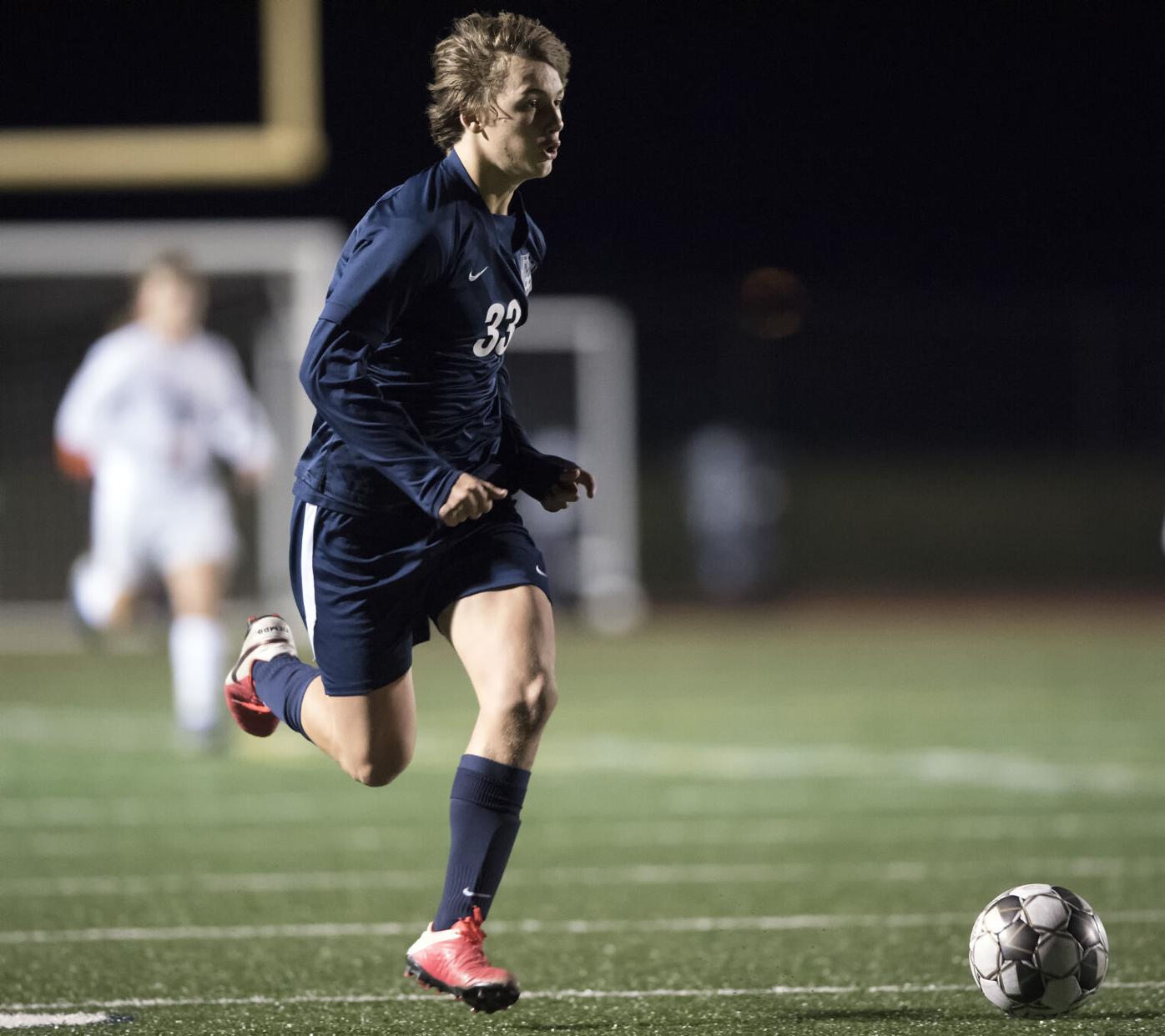 Manheim Twp.'s Tyson Johns (33) gets ready to score against Conestoga Valley during second half action of a District 3 4A boys soccer quarterfinal game at Manheim Twp. High School Wednesday Nov. 4, 2020. 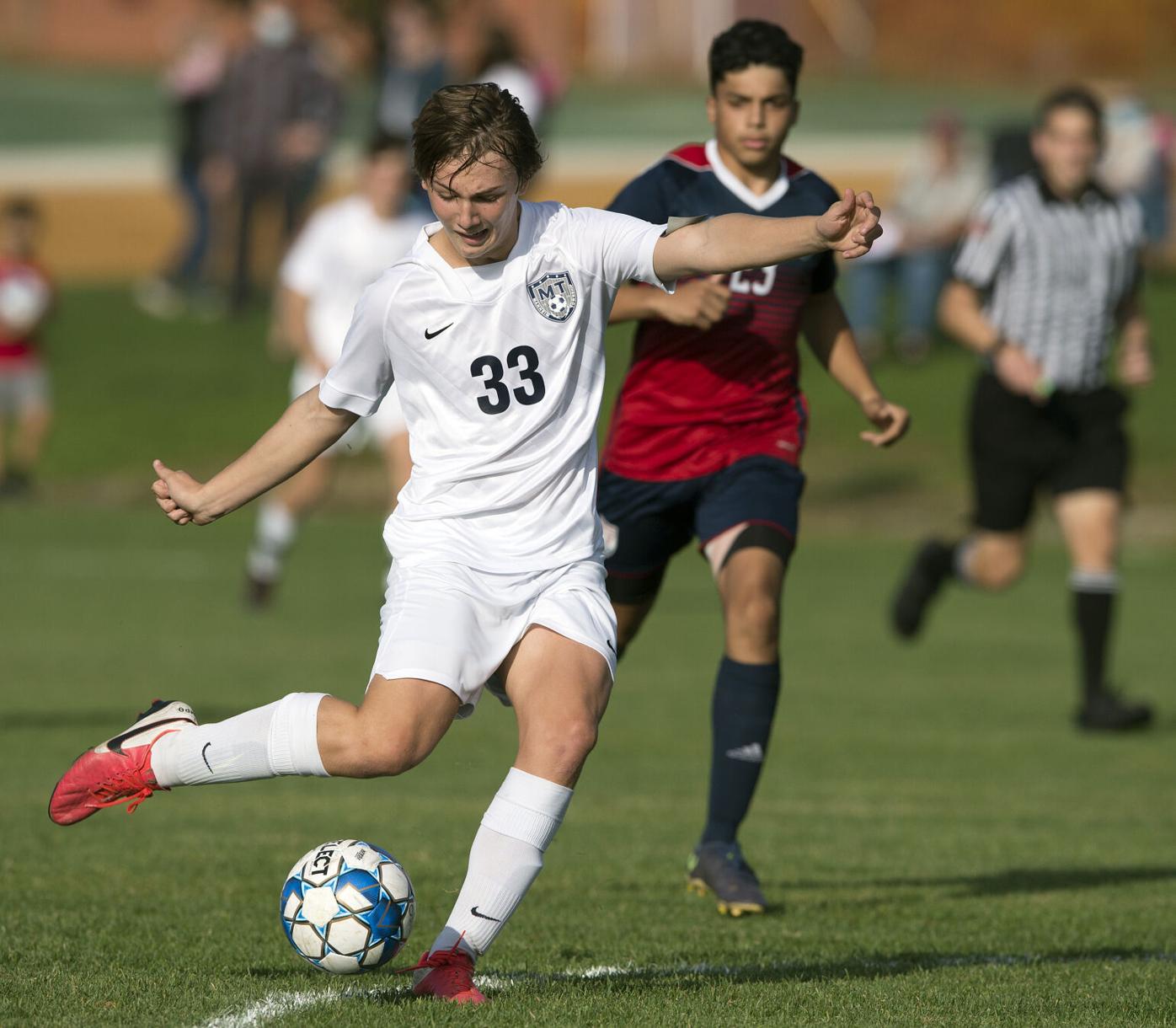 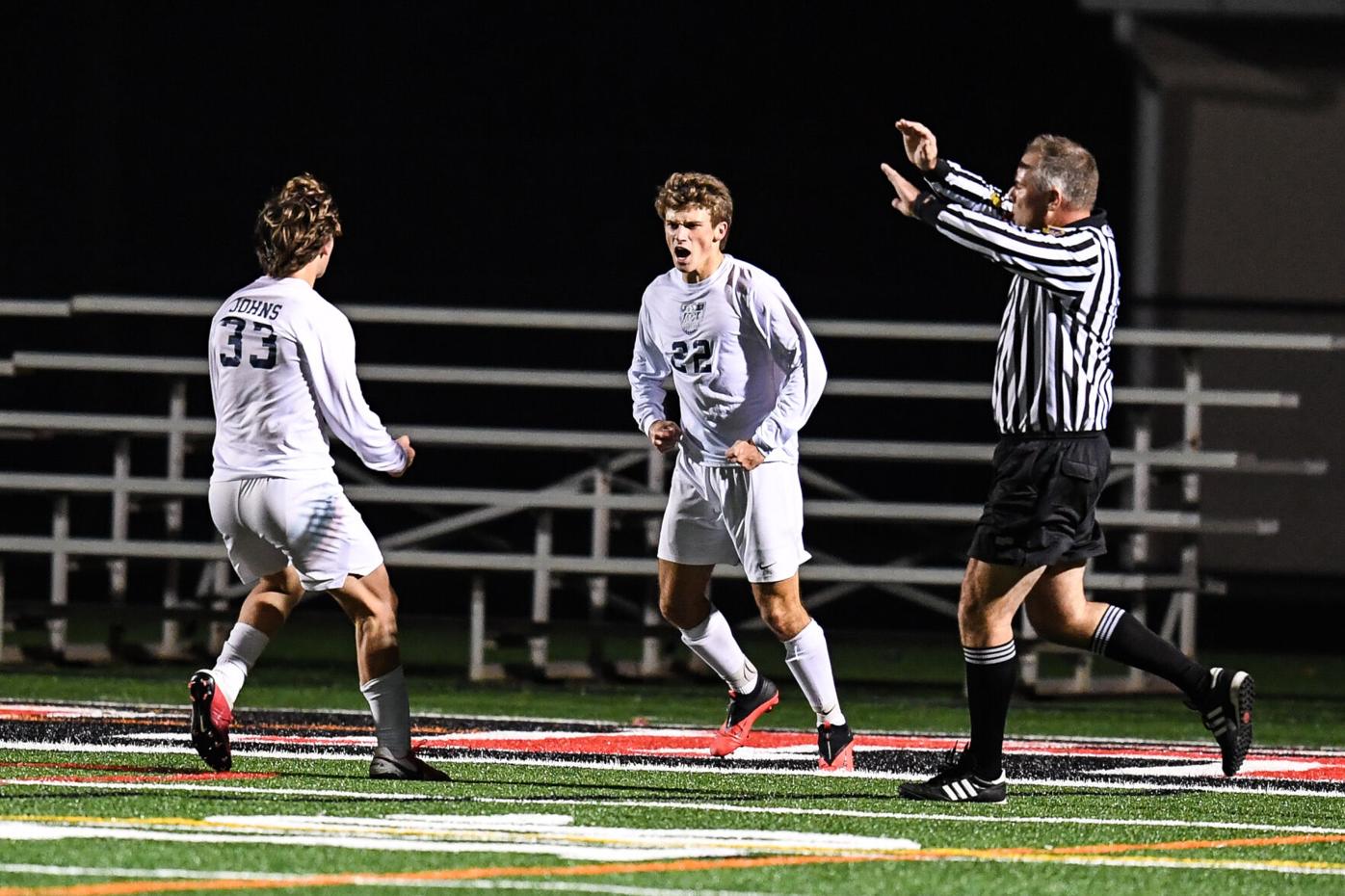 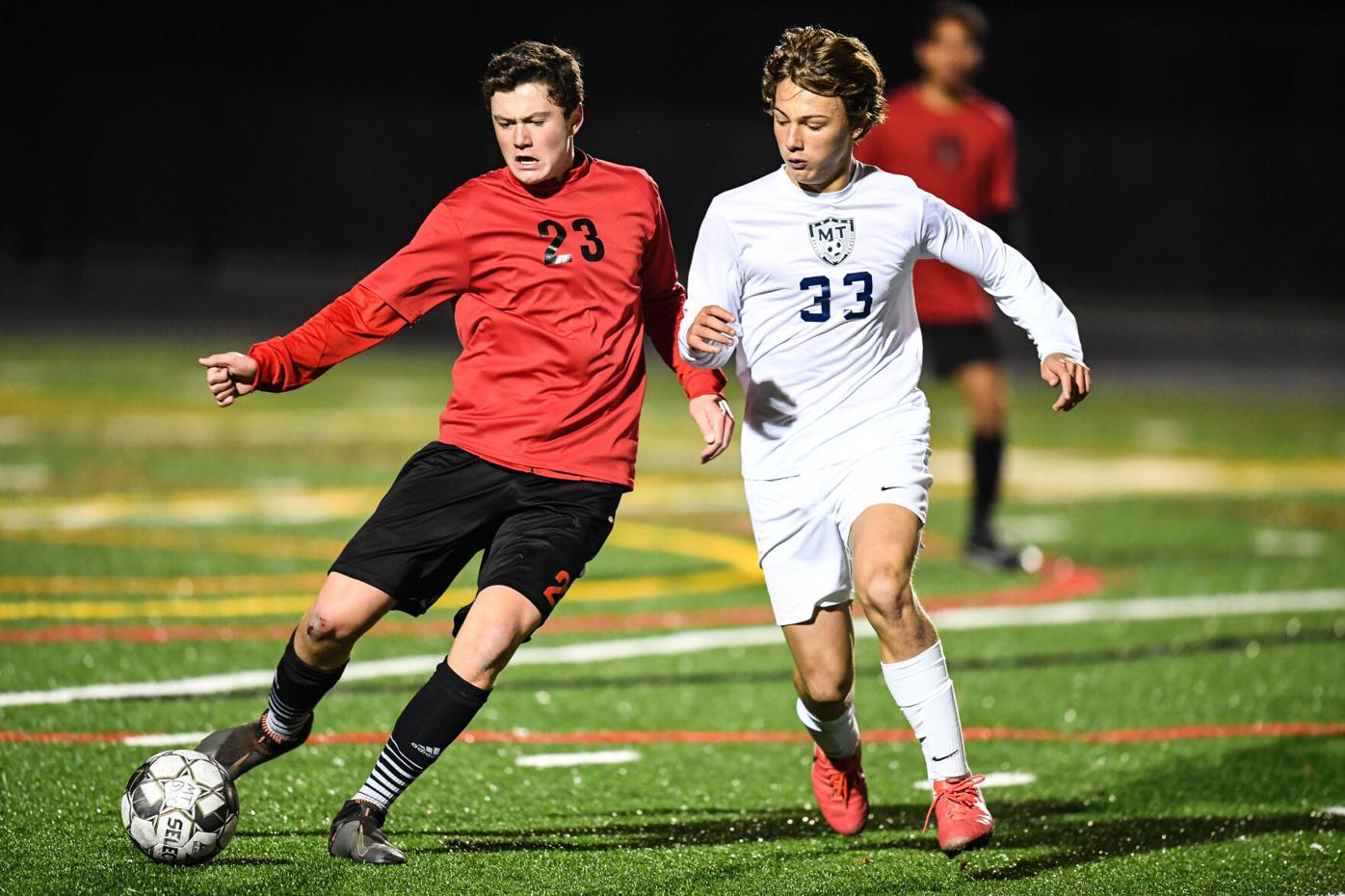 Cameron Thayer (23) of McCaskey and Tyson Johns (33) of Manheim Township battle for the ball in L-L League boys' soccer championship action at Warwick High School in Lititz on Saturday, Oct. 31, 2020. 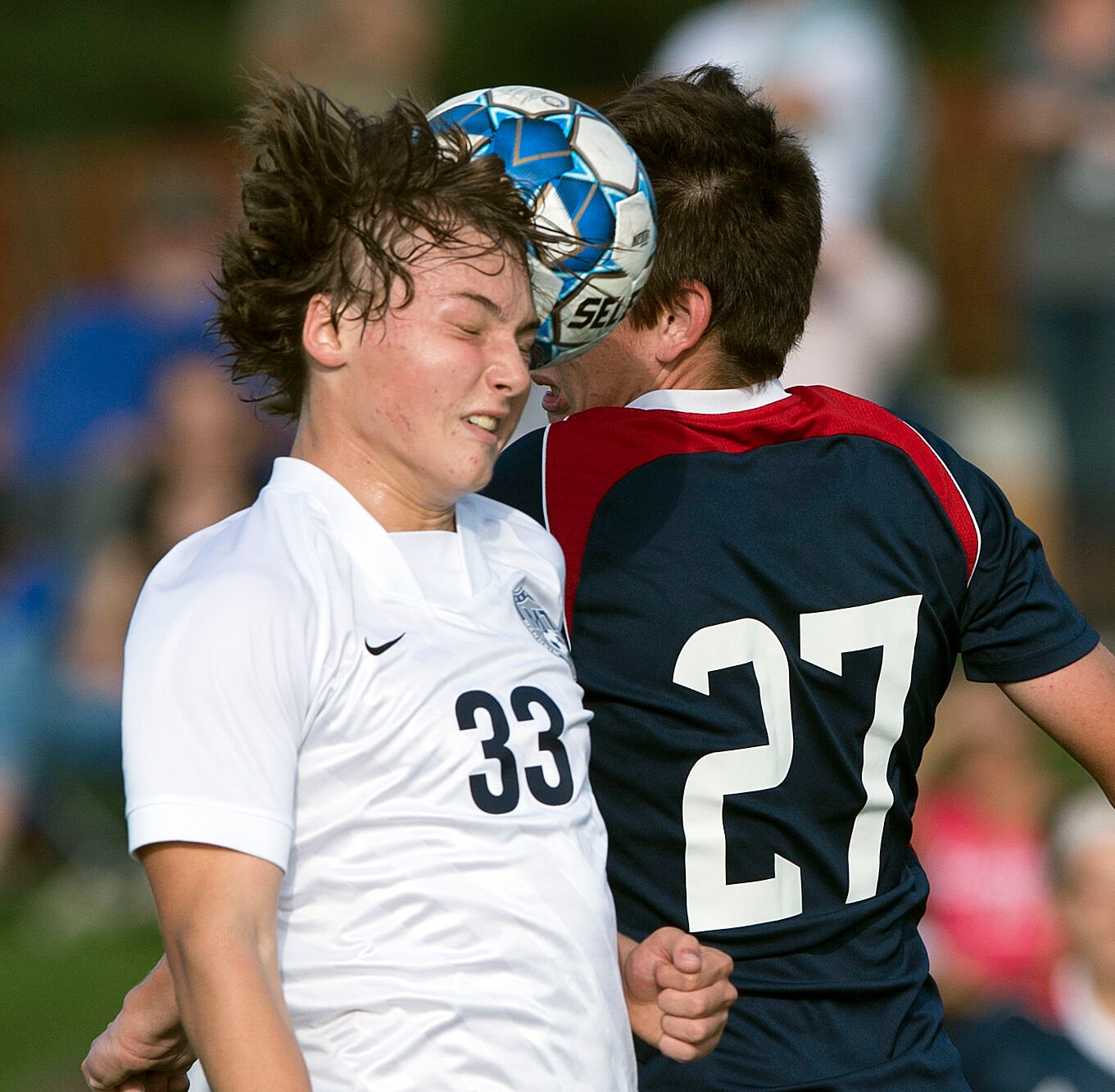 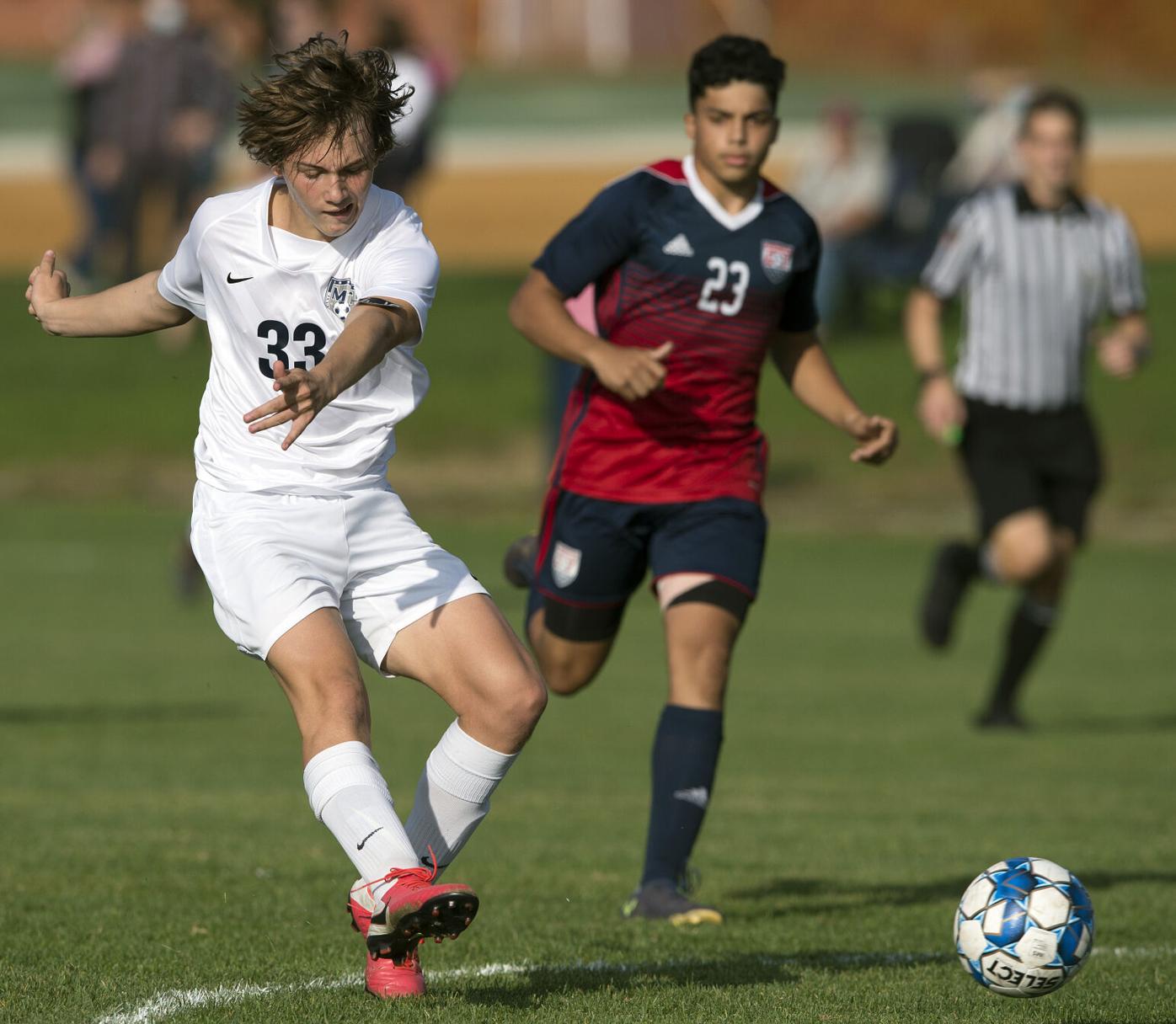 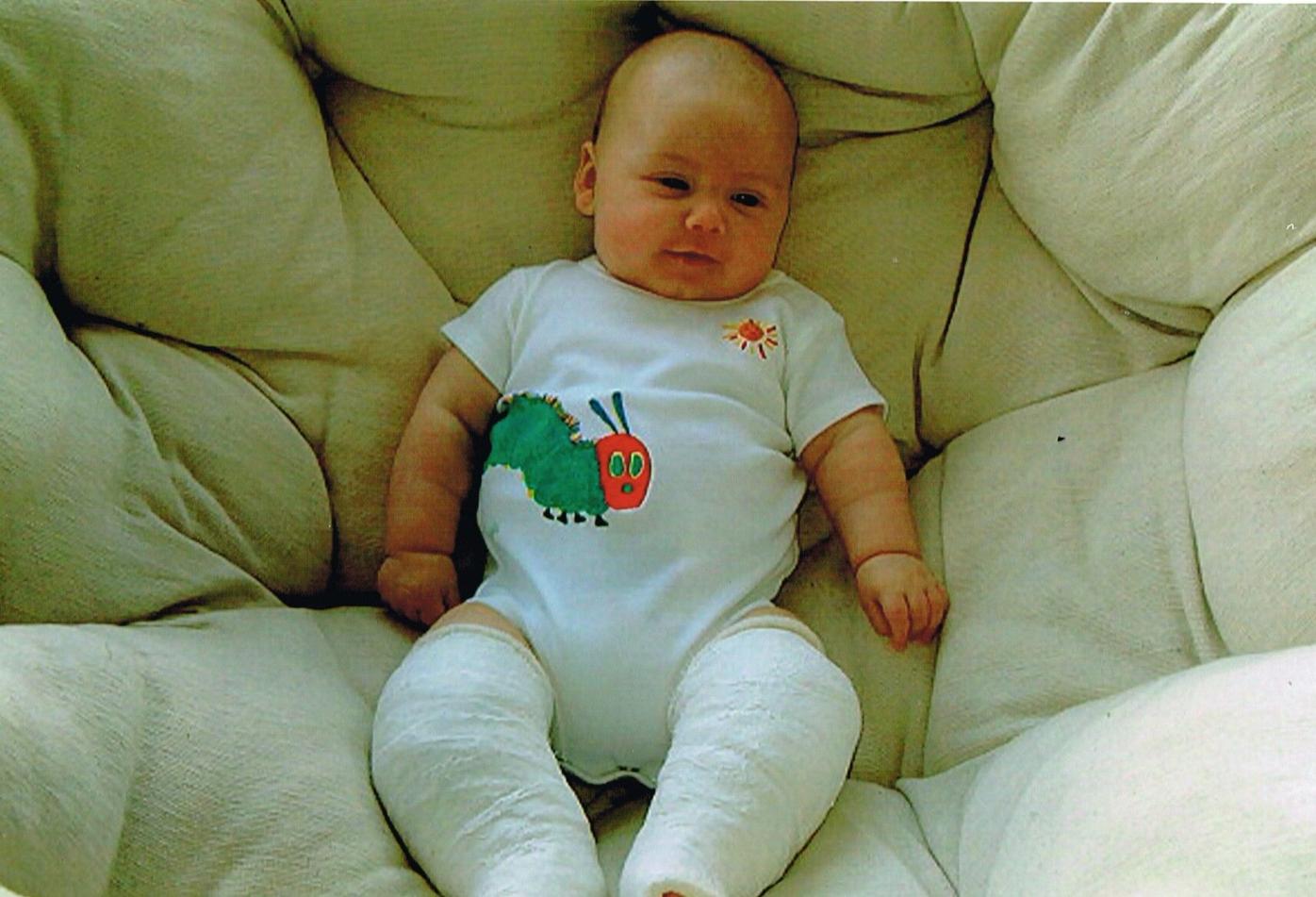 Tyson Johns was born with bilateral clubfoot, requiring plaster casts to be put on his legs every two weeks through the first six months of his life. 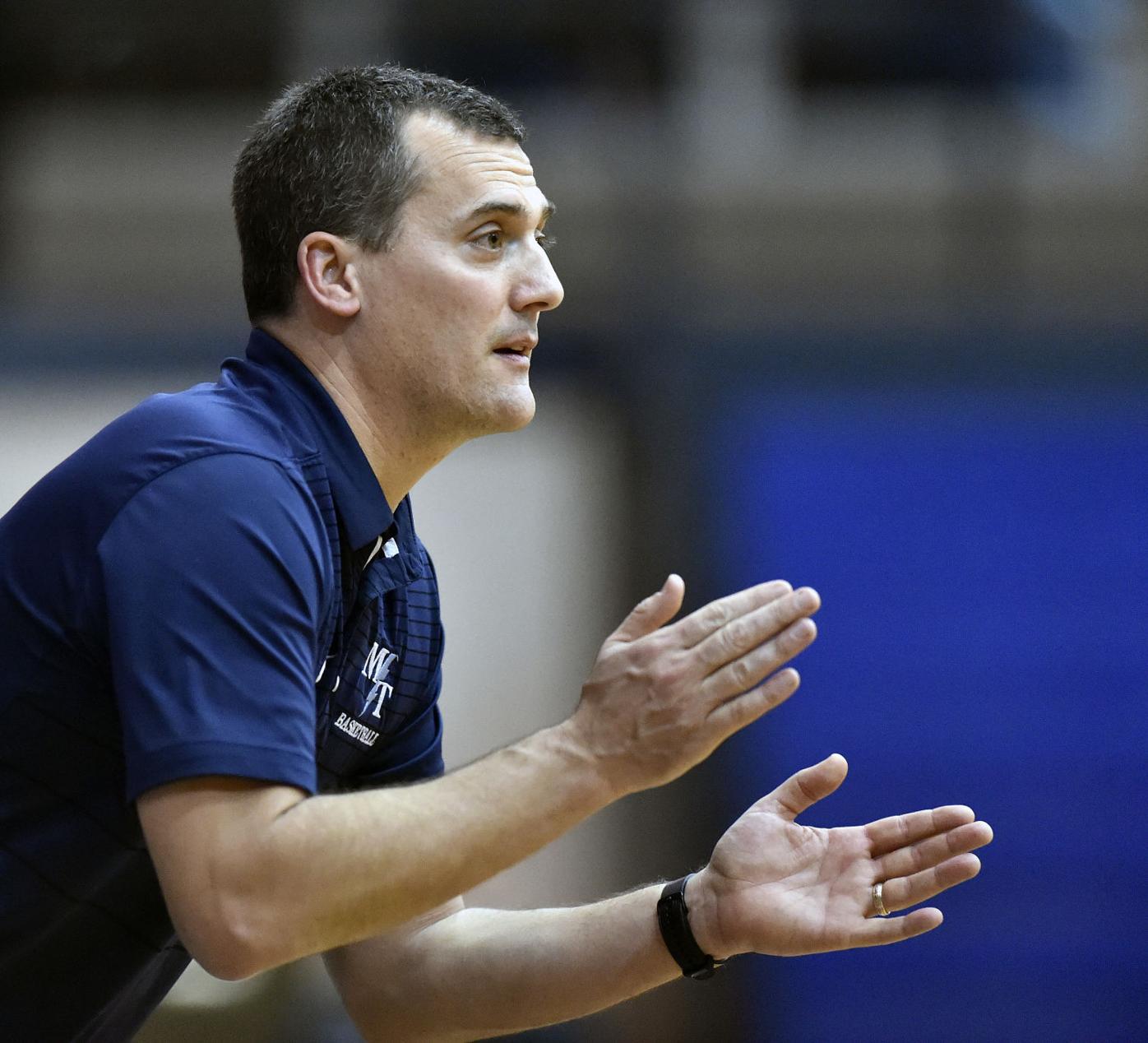 Manheim Twp.'s Tyson Johns (33) gets ready to score against Conestoga Valley during second half action of a District 3 4A boys soccer quarterfinal game at Manheim Twp. High School Wednesday Nov. 4, 2020.

Cameron Thayer (23) of McCaskey and Tyson Johns (33) of Manheim Township battle for the ball in L-L League boys' soccer championship action at Warwick High School in Lititz on Saturday, Oct. 31, 2020.

Nearly 17 years ago, on Jan. 18, 2004, Matt and Noel Johns were in their fifth year of marriage when they became first-time parents. Two days later, they were informed their newborn son, Tyson, had bilateral clubfoot.

“It wasn’t the smartphone era yet,” Matt Johns said. “We weren’t able to immediately Google search what that meant. ... We were parents on Day Three. We don’t know what that means. Would he be able to walk? Able to run?”

Now a junior at Manheim Township High School, Tyson Johns is not only running, he has blossomed into one of the leading scorers for the Blue Streaks’ boys soccer team this fall.

The same team that on Tuesday had to forfeit the District Three Class 4A championship game because of the school district’s decision to switch to remote learning for the rest of this week amid increased positive and pending COVID-19 cases.

But the coronavirus shouldn’t prevent Tyson Johns’ story from being told. It’s a story his family wants to share, to perhaps provide hope to other parents of a baby born with clubbed feet.

Clubfoot is a birth defect occurring in the womb around the third month of pregnancy, when the foot of a fetus turns inward and down. About 150,000 to 200,000 children annually are born with clubfoot.

The common solution for clubfoot is something called the Ponseti method, developed by Dr. Ignacio Ponseti in the 1950s. It requires a baby, shortly after birth, to have a stretching cast put on from the thigh down across the foot. Each cast stays on for a period of four to seven days. The cast is then cut off, the foot massaged and manipulated and the foot recasted. The point of all this casting is to stretch the foot out so that it faces outward, not inward.

“Every two weeks, (Tyson) would get a cast based upon the rate of growth,” Matt Johns said. “He was a stubborn little guy. They would take him and have to hold him while they would move his feet into position because his feet wouldn’t want to go there.”

Tyson has a scar on the back of his left leg from where his skin blistered from a cast.

“We did that for about the first four to six months of his life,” Matt Johns said.

The heavy plaster casts on both legs made it difficult for baby Tyson to get a good night’s sleep.

“He struggled to get in a comfortable position,” Matt Johns said. “We would hear him at nighttime slamming his legs down. We would go up in the morning and find one cast by itself in the crib. So we’d have to make a trip to the doctor that day to get another cast put back on.”

At the end of the casting process, Tyson underwent minor surgery on both feet — the procedure is called an “achilles tenotomy” — to have the heel cord lengthened so the foot can lay flat.

After surgery, Tyson wore plastic braces on the back of his leg from his shin down to his foot.

“He had that until he was 15 months old,” Matt Johns said. “Until he could walk without them.”

Two years ago, as a ninth-grader, Tyson had difficulty putting weight on his right foot, and his left foot hurt. He tried to play through the pain on the soccer field, which only exacerbated the problem, which stemmed from a growth spurt.

A year later, as a high school sophomore, he broke the pinky toe on his left foot playing basketball in gym class.

It’s worth noting here Tyson grew up around basketball because of his dad, a longtime coach who is entering his fifth year as the Manheim Township boys basketball varsity skipper this winter. Tyson stopped playing basketball competitively after eighth grade in order to focus on soccer.

“He was supportive about it,” Tyson said of his dad. “He understood.”

As for Tyson’s feet, they’re now different sizes — a common occurrence for those born with clubfoot. He wears a size 10 ½ to 11 for his left foot, and a 9 to 9 ½ on the right foot.

But other than that, he is mostly fine. He still stretches his ankles twice a day: “Once in the morning,” he said. “And again before soccer practice.”

There’s a slight chance he might need surgery later in life, but he doesn’t worry about it.

A future he’s building toward with a strong work ethic on the soccer field and in the classroom, where he holds a 3.6 grade-point average.

“If I do good with whatever I’m doing in the current time,” he said. “It could lead to a better future.”

Below is a list of Lancaster-Lebanon League boys soccer all-stars for the 2020 season. The selections were made by L-L coaches. A Player of th…

Too busy enjoying the fall weather this weekend to get your dose of LNP | LancasterOnline? Not to worry, we got you covered.

Since January, Cocalico sophomore Weston Martin has had to give up Pop-Tarts. And pizza. And several other foods that contain starch, dairy an…

Sam Hershey doesn’t quite remember his childhood days when he attended practices at Millersville University, where his dad, Trevor, was the wo…