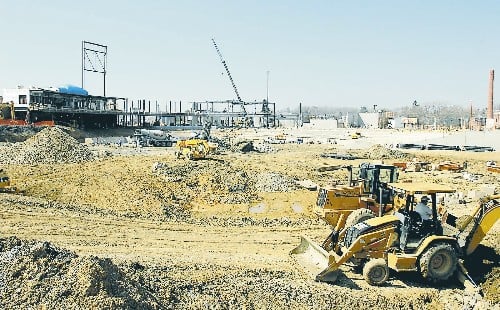 Earthmovers grade the outfield this week as work continues on the skeleton of Sovereign Bank Stadium in York. (Roxanne McRoberts / Intelligencer Journal) 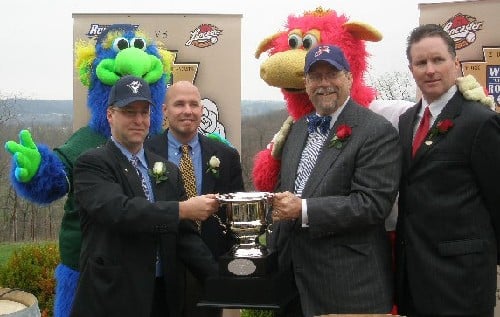 Earthmovers grade the outfield this week as work continues on the skeleton of Sovereign Bank Stadium in York. (Roxanne McRoberts / Intelligencer Journal)

It's not exactly Yankees-Red Sox, but this season Lancaster and York will renew a baseball rivalry that hasn't been contested for almost 50 years.

The last time both central Pennsylvania cities fielded pro baseball teams was 1959, when the Lancaster Red Roses and York White Roses both played in the Eastern League.

This year, the expansion York Revolution will join the defending champion Lancaster Barnstormers in the Atlantic League, and there already is good-natured ribbing between the franchises.

"Division titles and Atlantic League championships will come down the road for us," Revolution general manager Matt O'Brien said at a news conference Wednesday. "But we're ready to win the season series from the Barnstormers right away."

Lancaster Mayor Rick Gray and York Mayor John Brenner also got into the act. The mayor of the city that loses the series will plant a rose garden, using the winner's choice of rose, in front of the winner's stadium.

The losing mayor also will sing "Take Me Out To The Ballgame" at a game in the city on the other side of the Susquehanna River, and the winning team's banner will hang above the losing town's City Hall for a week.

The Atlantic League season begins May 4, with the Barnstormers hosting the Road Warriors and the Revolution playing at Bridgeport.

But the date the Revolution is most focused on is May 15.

Construction workers are putting in long days at the hole in the ground on Arch Street that is to be Sovereign Bank Stadium. With just over a month to go, there is still a lot of work to be done.

"I'm on schedule," said Dale Clark of Wagman Construction at the stadium site Tuesday. "My schedule says, and always has said, August. We're doing what we can. We have 119 people here on-site working 10-hour days six days a week."

Clark said the stadium's skyboxes might not be ready, but said, "If they have a seating bowl and a field, they'll be able to play."

Andy Frankel, director of public affairs/marketing for the Revolution, is confident the stadium - which will have a "Green Monster"-type wall in left field and an old-fashioned manual scoreboard - will be ready by May 15.

He said the August time frame Clark talked about was for completion of the entire project.

"We expect to open up on time," Frankel said. "Will the stadium be 100 percent done? No way. That was never the plan. Our hope and expectation is the ballpark will be done enough so that we can play ball and open up for business, and fans can enjoy the experience.

O'Brien joked about the construction delays, saying things had slowed down so workers could build a larger trophy case.

When the York stadium is ready and games there include the Barnstormers, count on hundreds of Lancaster fans showing up. Barnstormers fans travel well.

For the Barnstormers' playoff game at Atlantic City last season, there were more Lancaster fans in the stands than home-team rooters. And a large contingent of Barnstormers fans also made the trip to Bridgeport, Conn., for two playoff games.

"It's very unique in minor-league baseball to have teams this close," said Adam Aurand, public relations manager for the Barnstormers. "Reading and Harrisburg aren't that far apart, but they don't have that same kind of rivalry that this is going to be."

Aurand said there are already plans for a Lancaster bus trip to the first game in York.

The team that wins the season series will capture the "War of the Roses" Community Cup.

"We have to clinch it over there," Aurand said. "I'm not guaranteeing a sweep, but I don't think winning the series will be a problem."

The teams, which have the same ownership, don't expect brawls in the stands, but they do expect the proximity of the teams to create more passion than games with teams like Newark or Long Island.

"They're going to care more about these games," Aurand said. "Each team will have their fans going across the river."