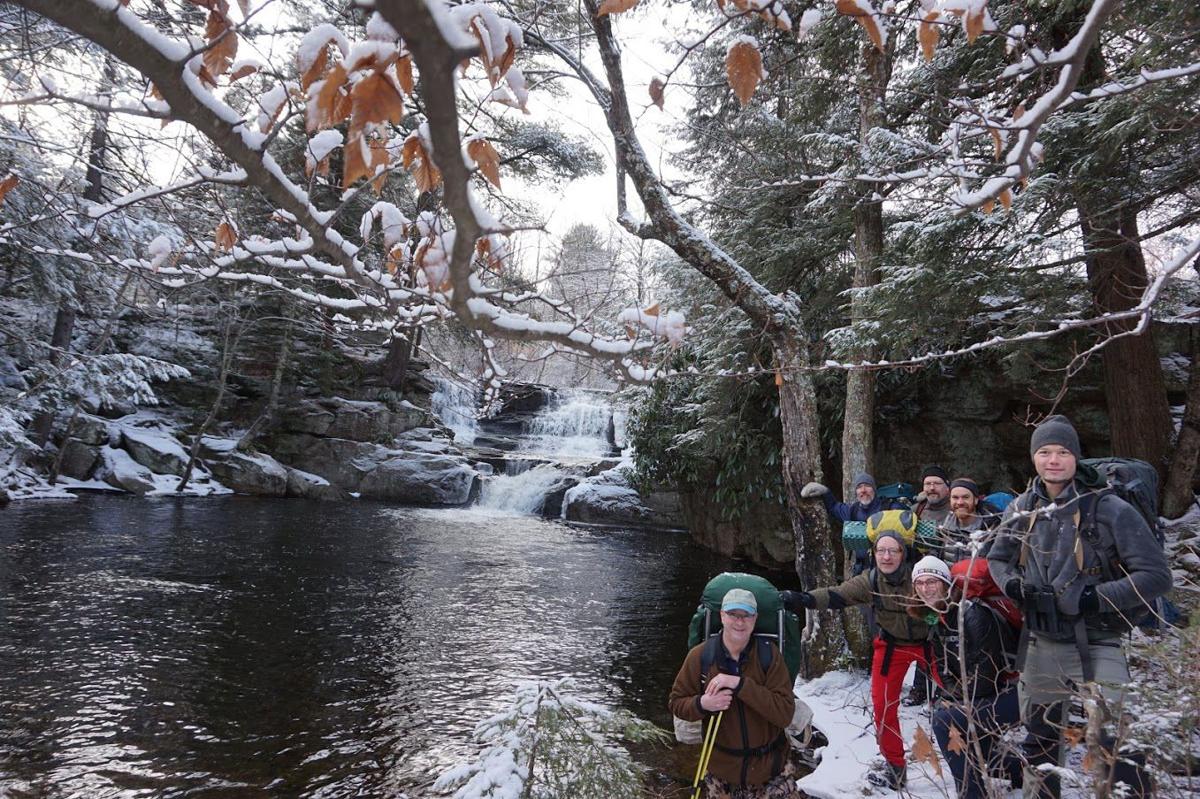 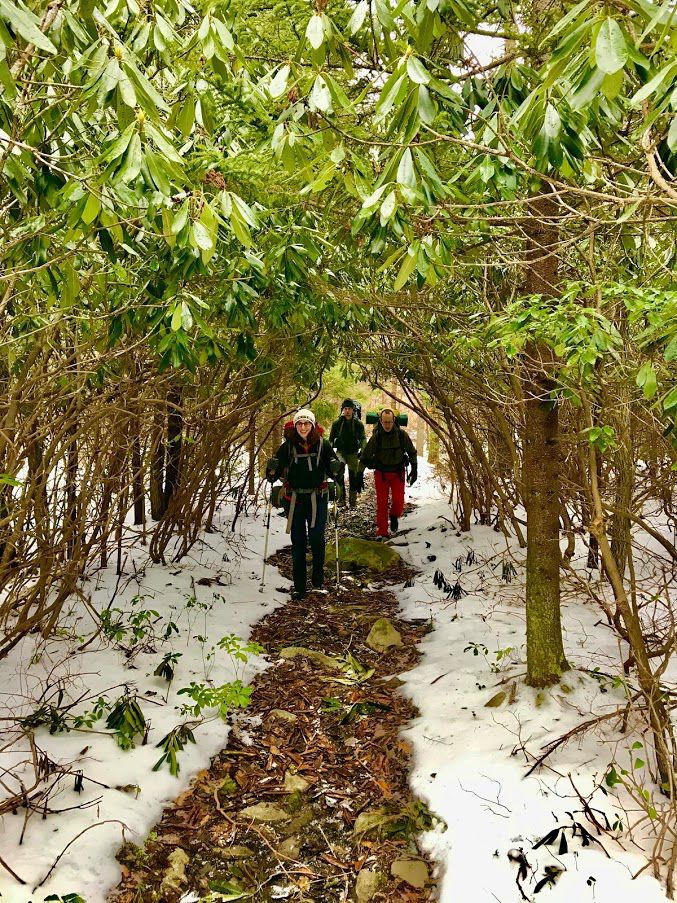 Walking through a tunnel of rhododendron on the Pinchot Trail. 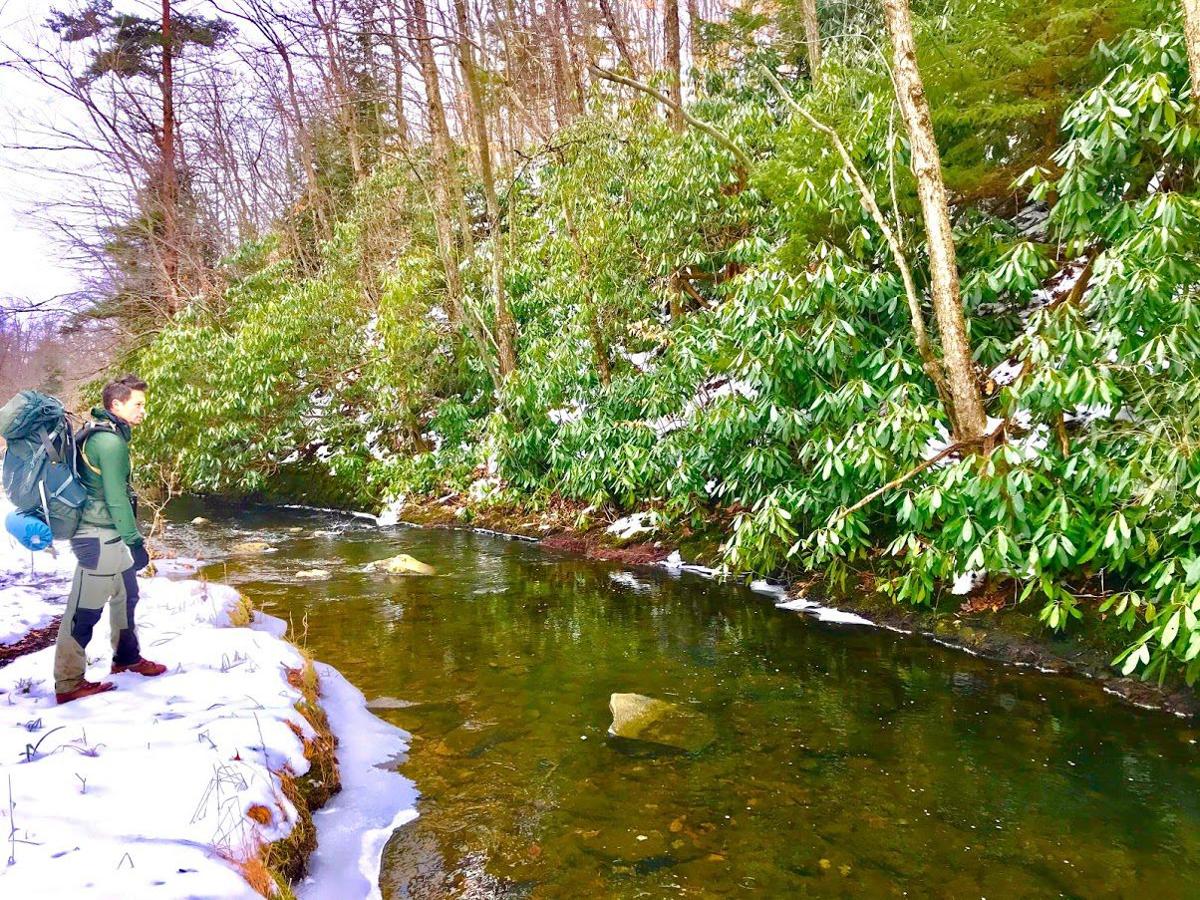 Sheldon Horst admires the winter beauty of a wall of rhododendron along Choke Creek in Pinchot State Forest. 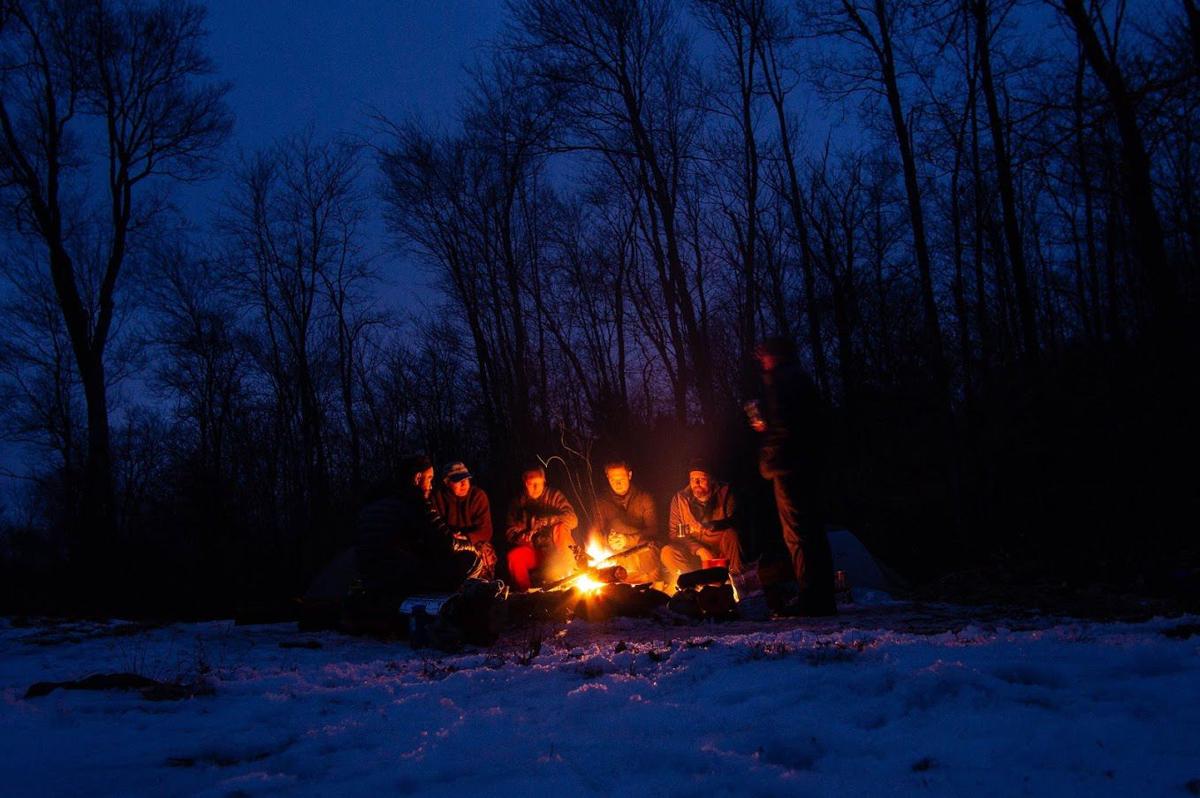 Spending a winter night around the fire. 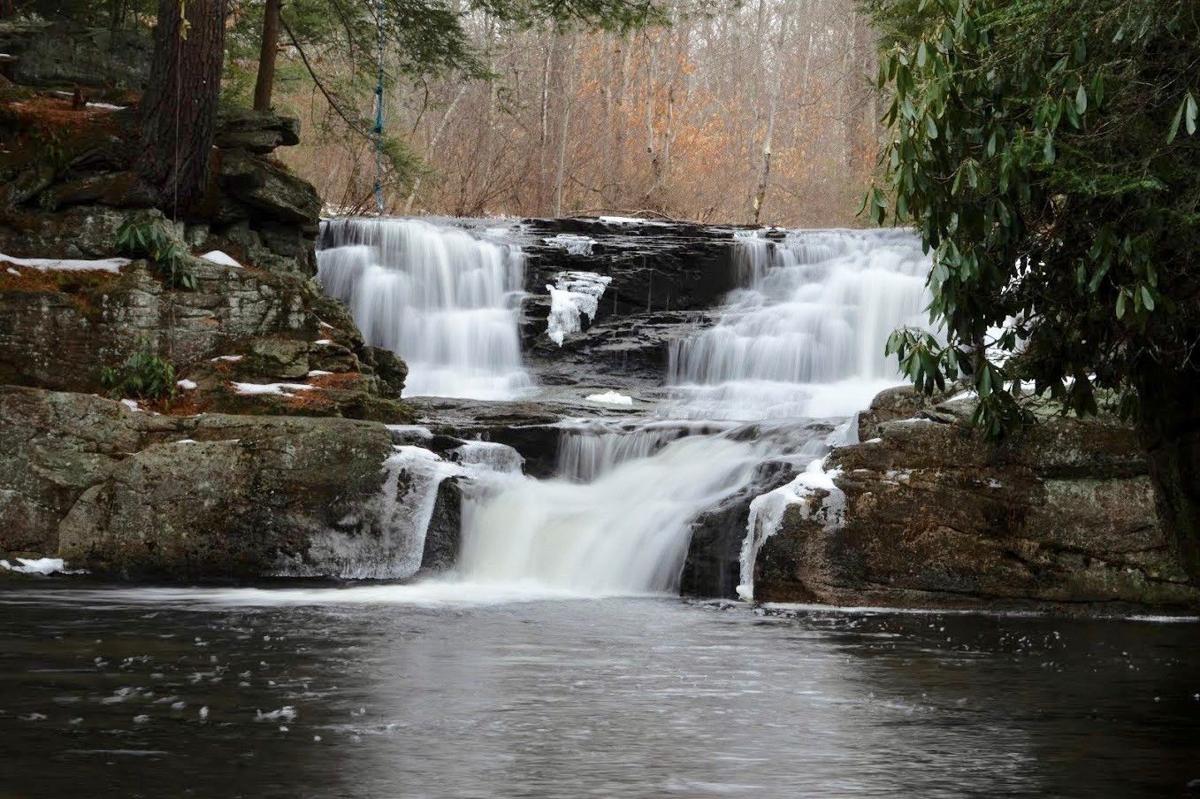 Walking through a tunnel of rhododendron on the Pinchot Trail.

Sheldon Horst admires the winter beauty of a wall of rhododendron along Choke Creek in Pinchot State Forest.

Spending a winter night around the fire.

Seven of us caught a glimpse of it last weekend on our 21st annual winter backpacking trip, trekking to a different wild spot in the state and sleeping out in nature’s frozen splendor.

Certainly it was just another dreary day so typical of this deflated winter when our caravan of two vehicles stopped at a diner near Kutztown to fatten up with an unhealthy breakfast. After ascending the Pocono Plateau, the temperature had dropped into the 30s, but the ground was bare.

But, like entering our own snow globe, as soon as we turned off the highway and into the entrance of Pinchot State Forest, we were greeted with a couple of inches of intact snow on the dirt road.

We rejoiced at the trailhead and donned layers of clothing and packs filled with tents, sleeping bags and pads, and a luxurious assortment of food and beverages that only a modest overnight backpack allows space for.

What a discovery, this pop-up state forest. Formerly, Lackawanna State Forest with a modest 8,100 acres on two disjointed tracts, a whirlwind of acquisitions between 2002 and 2014 has created a significant new natural playground. Willing corporate landowners and conservation groups helped forge the natural area.

The state forest, now at an ecosystem-scale 48,504 acres, includes just about every habitat type found in the Poconos. The forest may grow even more in the future and will become steward of 20 miles of the Delaware & Lehigh National Heritage Corridor, a multiuse trail.

It’s also the first state forest created in more than a century. It’s aptly named in honor of Gifford Pinchot, a Pennsylvania native son who was a pioneering forester, head of the U.S. Forest Service and two-time governor of the state.

It’s quickly becoming a touchstone for those seeking an escape to the outdoors in a growing urbanized area. We found that out when we ran into the only other humans we would encounter in two days. On a rock bench overlooking gorgeous Choke Creek, we came across three men from New Jersey relaxing in camp chairs amid a swirl of smoke as they grilled cheeseburgers. “There’s no backcountry where we come from,” explained one. “This is our favorite place.”

Not long after we started down the south loop of the 23-mile Pinchot Trail, the state forest’s signature trail, we found ourselves in wonder, walking through a tunnel of towering rhododendron. It’s unexpected and reassuring to again be walking through woods with the crunching of hiking boots on snow marking our progress.

Picking our way through a diverse forest of hardwoods sprinkled with spruce trees like overgrown Christmas trees, we came to a vast wetlands valley drained by Choke Creek. Dammed in spots by eager beavers, the creek is slightly stained by natural tannins as it alternates between pools and riffles before joining the Lehigh River. I spot a sizeable trout heading for the submerged portion of a beaver lodge.

Five miles in, we come to our overnight destination. With its two-tier falls, deep plunge pool, cliffs and walls of rhododendron, the bench on the lip of Choke Creek Falls is breathtaking. This camping spot is one of the hottest tickets in town during the summer, but on this winter day we have exclusive rights.

As with all our winter trips, the first order of business is gathering a robust pile of firewood and getting those warming flames going. After we unfurl our tents and marvel at the waterfall, it’s belly up to the fire for the next 4 hours.

Our kibbitzing is far ranging and is halted briefly when Mark Kapolka, a veterinarian from Lebanon, produces from his pack a charcuterie board he fashioned himself. On it is an inviting array of dates, figs, prosciutto, sopressa, speck, chorizo and manchego cheese.

Later, when dark has fallen and our stomachs have space, Chris Esh, an optometrist and woodworker from Lititz, sets to work grilling bison burgers and rabbit sausages on toasted buns.

As stimulating as the conversation is, by 9 p.m. we are ready to burrow into sleeping bags and be lulled to sleep by the murmur of moving water.

My first inkling that we have a surprise is when I hear Sheldon Horst, of Lancaster, rustling something. Horst had elected to sleep under the open stars. I remembered him saying if it snowed he’d just spread a tarp over his sleeping bag.

Could it be? I fumbled for my headlamp, unzipped the tent flap and shone a beam outside. Tiny flakes of wonderful snow sifted down from the sky. The more peaceful sleepers of our group don’t discover the gift from heaven until the morning when they zip open their tents, touching off small avalanches of snow.

We make trail coffee to reignite our engines for the road. “Well, it’s not hot, but it’s coffee and it’s not frozen,” says Dan Nephin, of Lancaster.

Soon, it’s time to pack up and hit the trail again, this time our packs gratefully a few pounds lighter than the day before. A glorious sunrise sends us off in good spirits. A slight wind dislodges snow from branches above, showering us with winter’s confetti as we march.

Wildlife already has made the rounds. We admire the tracks of deer, coyotes, snowshoe hares and possibly a fisher. Under evergreen trees here and there, mounds of shavings reveal where red squirrels sat on branches, grinding up pine cones.

As with many trails in Pennsylvania, the path is rocky and I am grateful I brought two trekking poles to keep my balance. The trail back has more uphill than I expected but soon enough our weary bones take us to our snow-covered vehicles.

We return to the other world, already longing for a craft beer and hot meal in Jim Thorpe. The interlude outdoors has been brief but infinitely recharging.