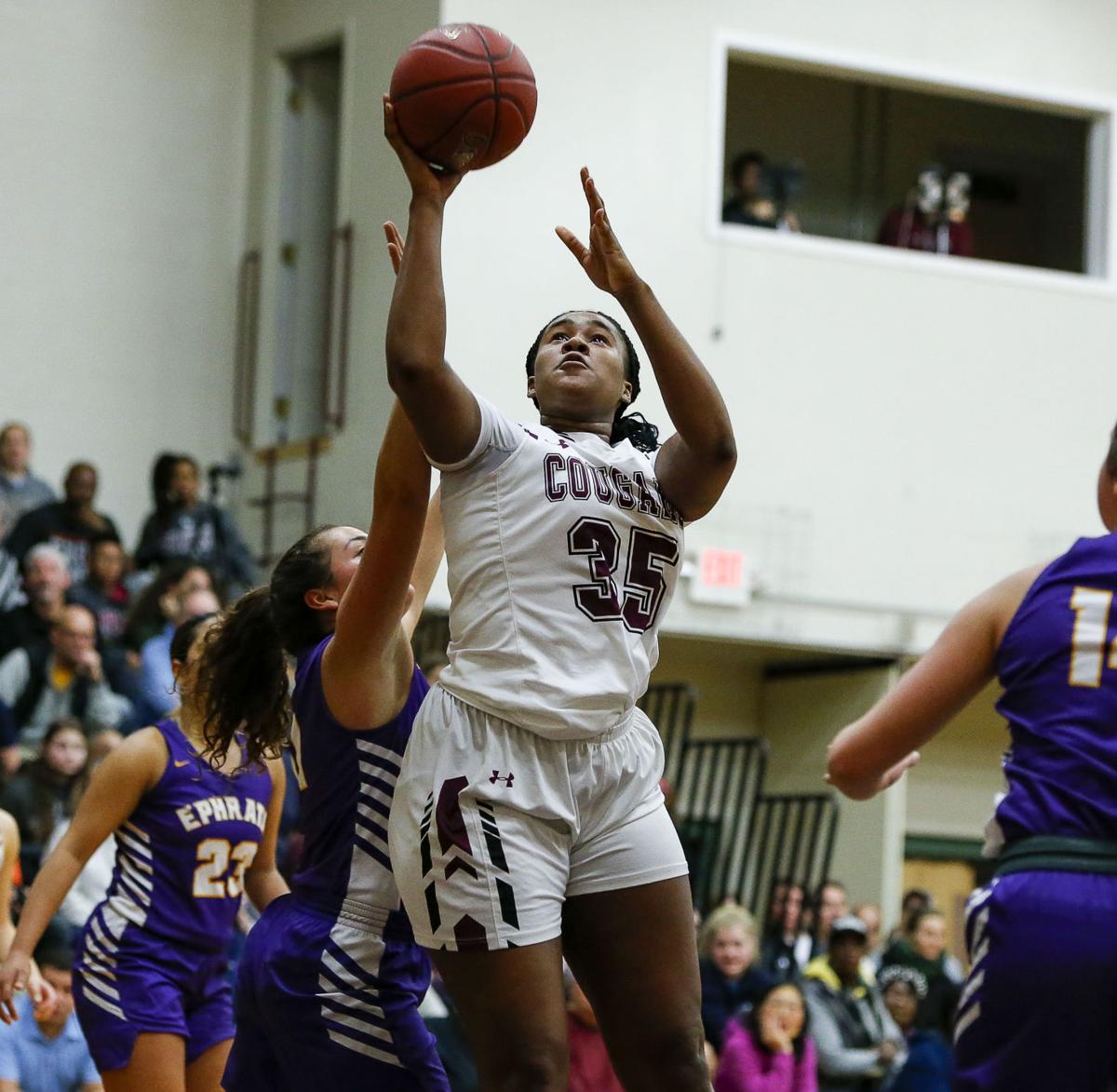 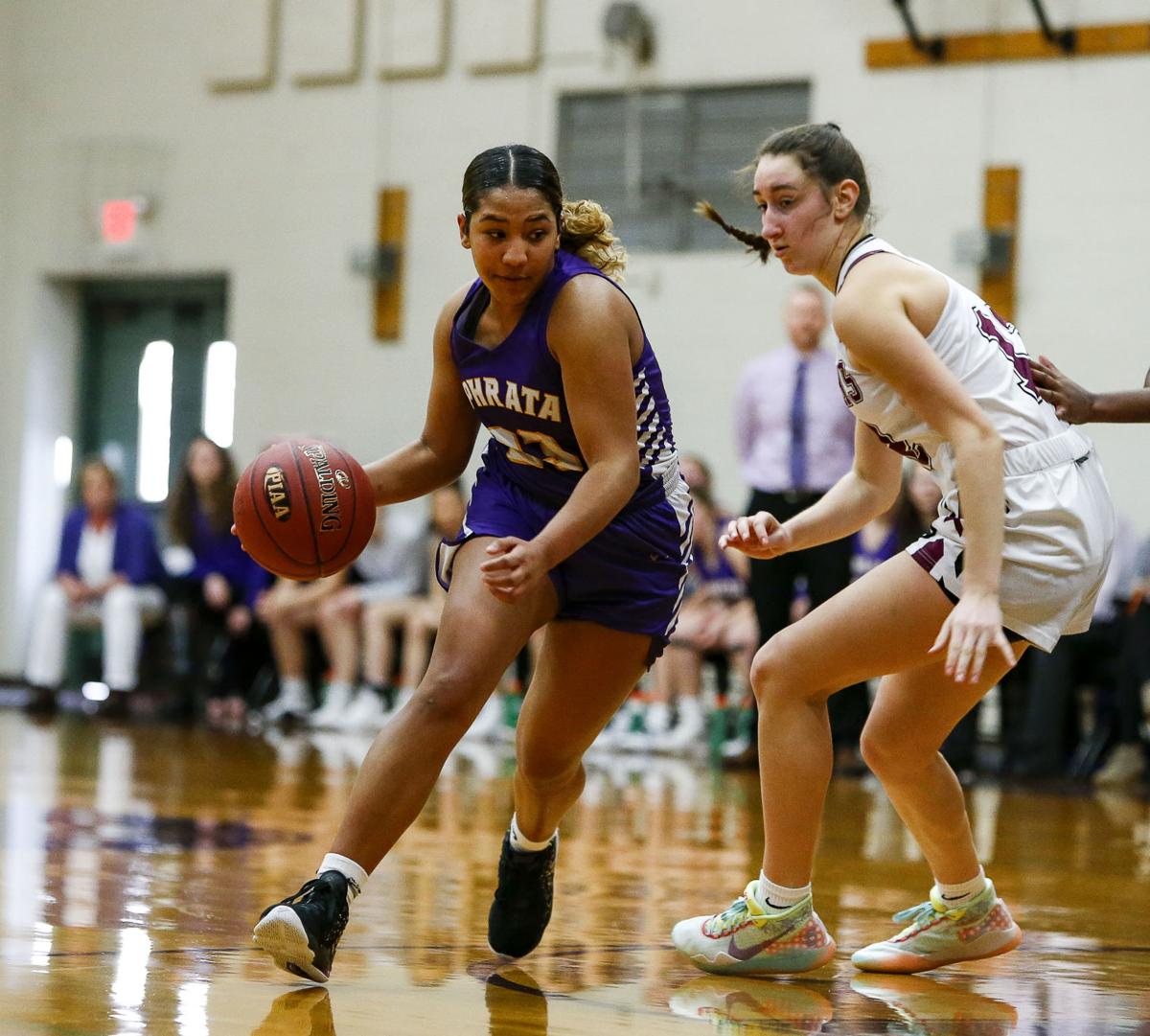 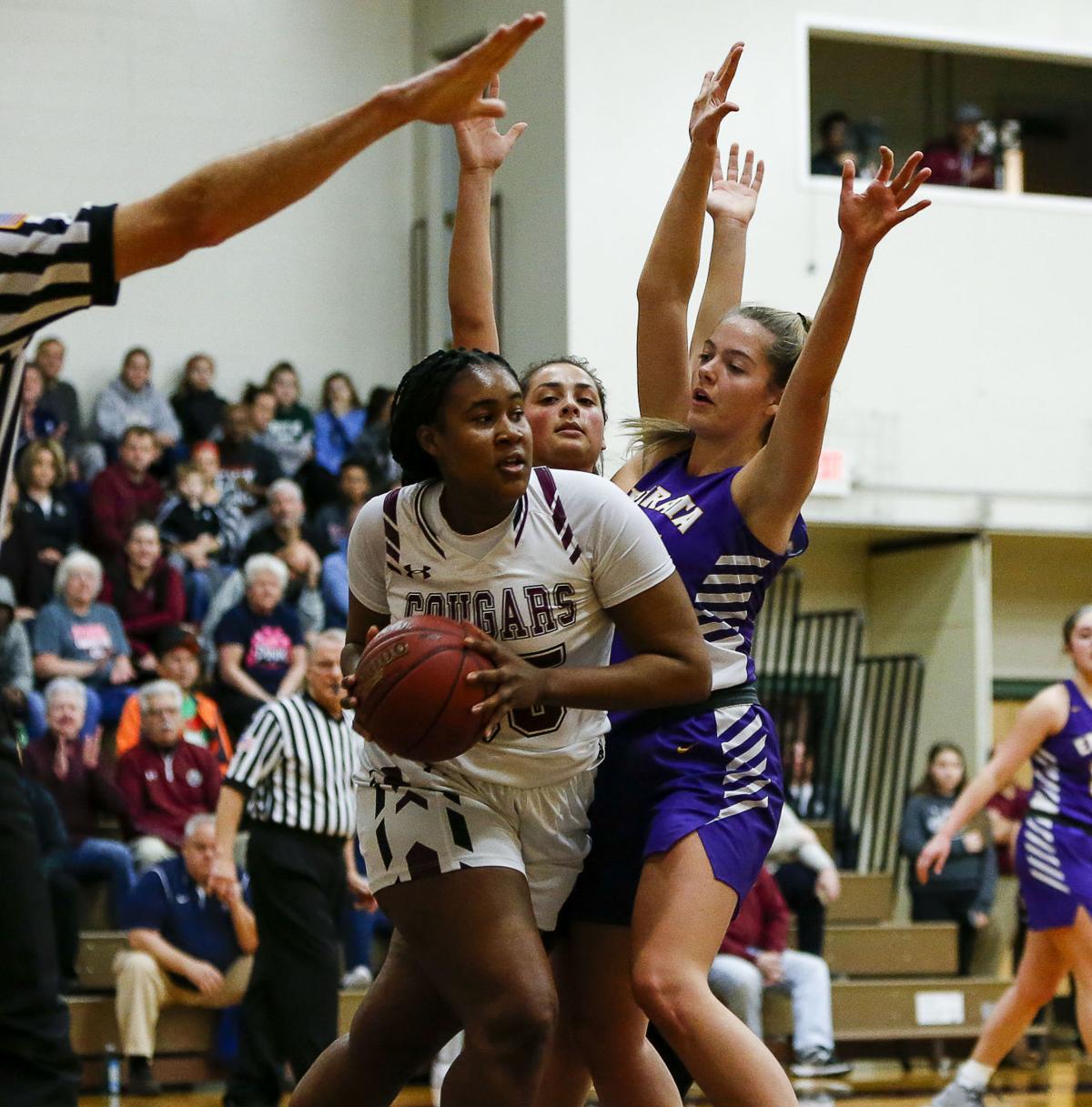 #35 Ashanti Duncan gets the rebound during the first quarter against #11 Jocelyn Umana and #24 Hannah Plowmaker. 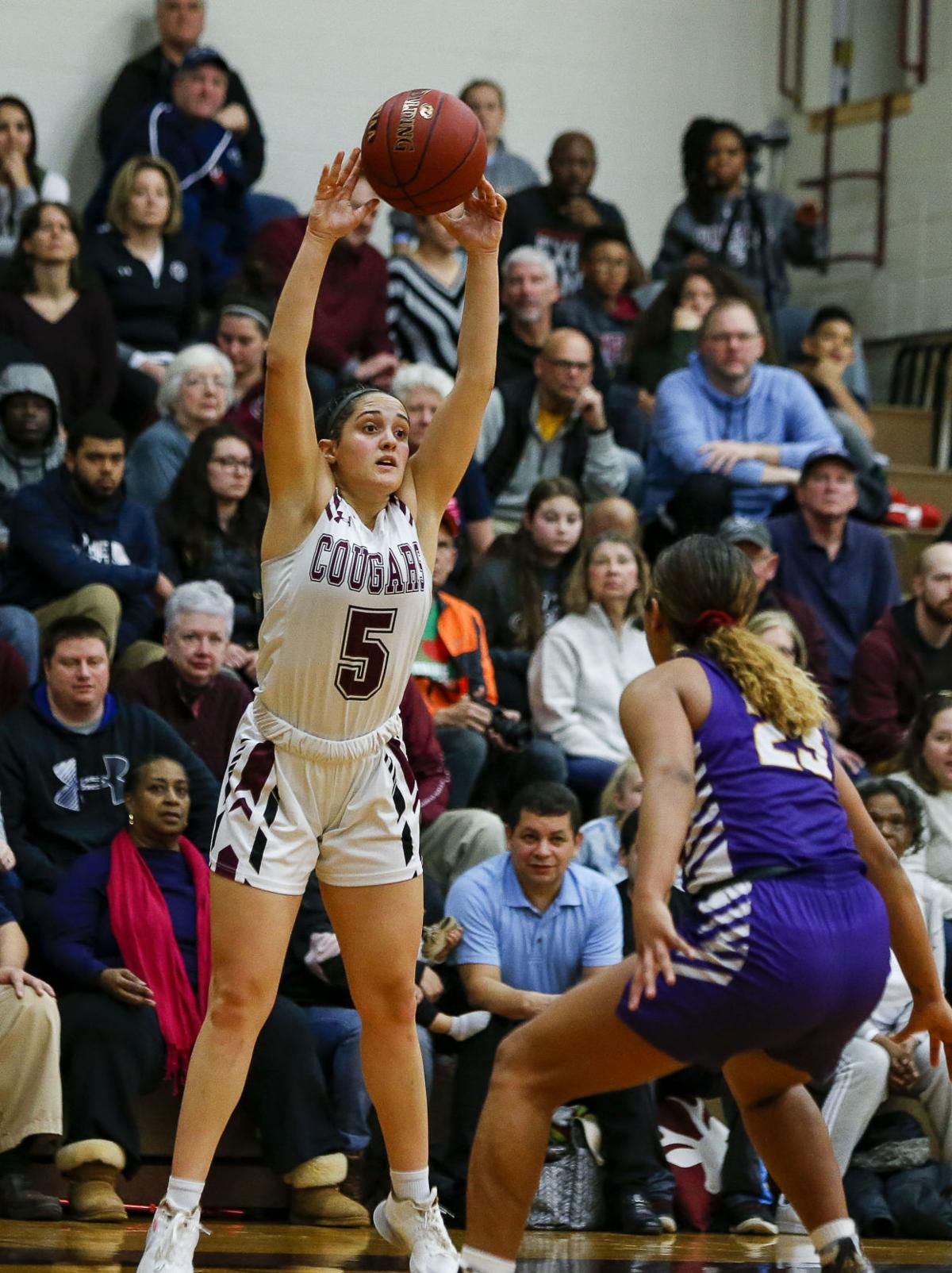 #5 Kaela Stankiewicz looks to pass across the court against #23 Gabbie Gerola-Hill. 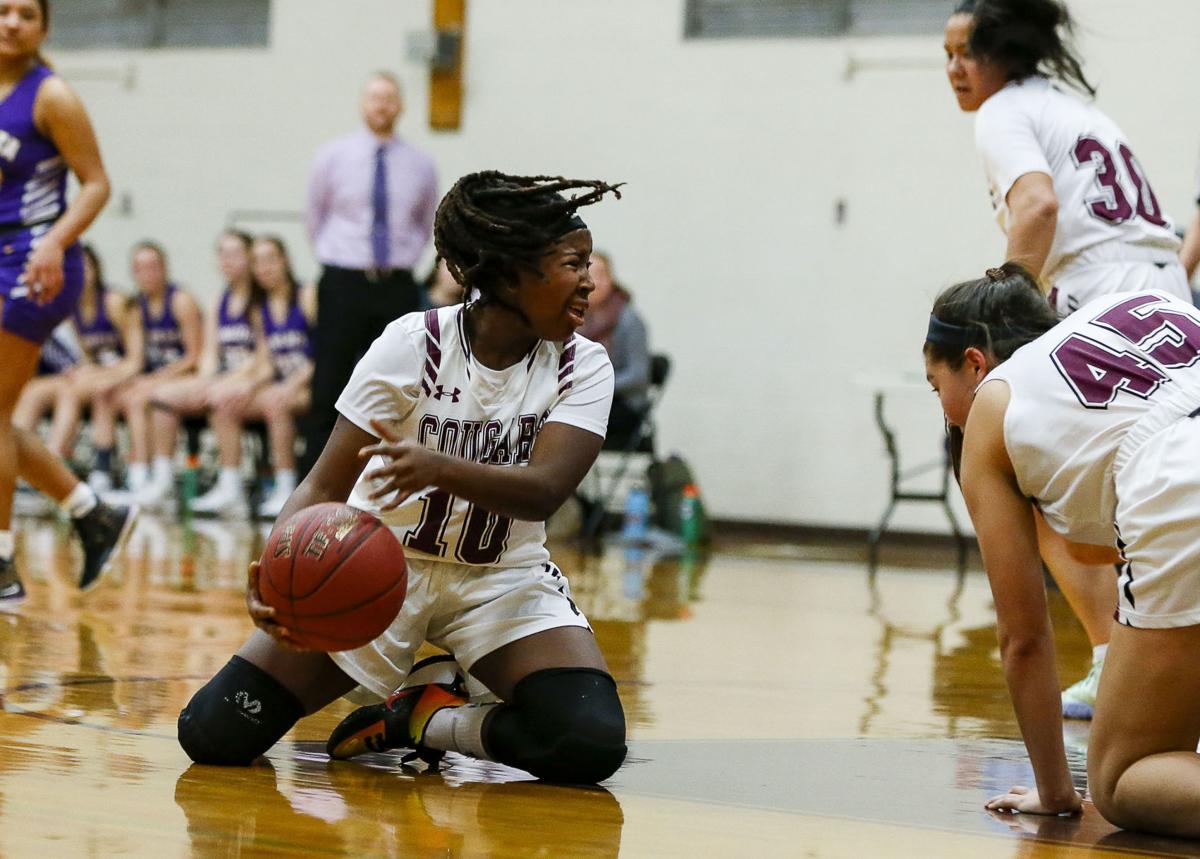 #10 Genesis Meadows recovers the ball during the fourth quarter. 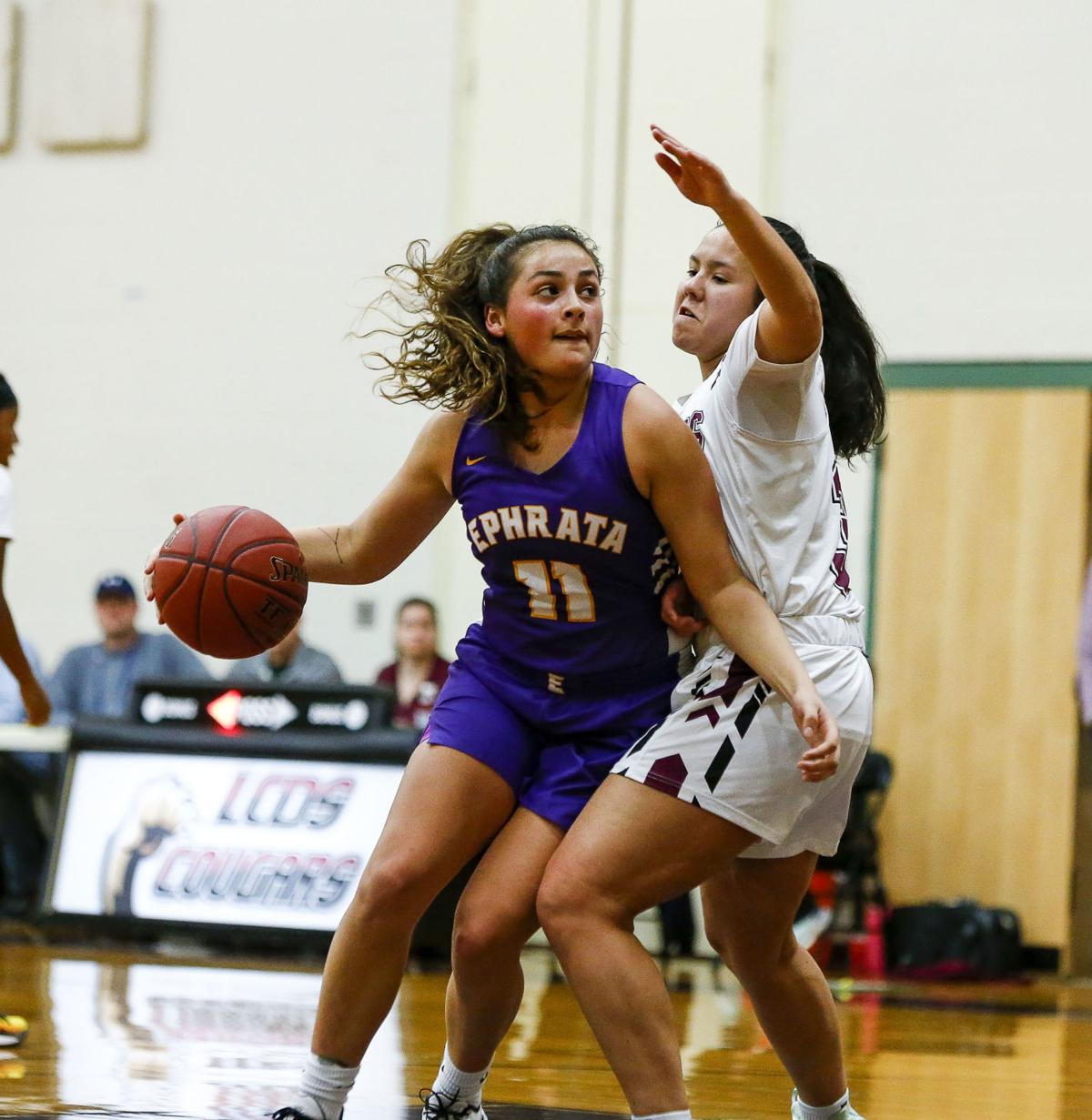 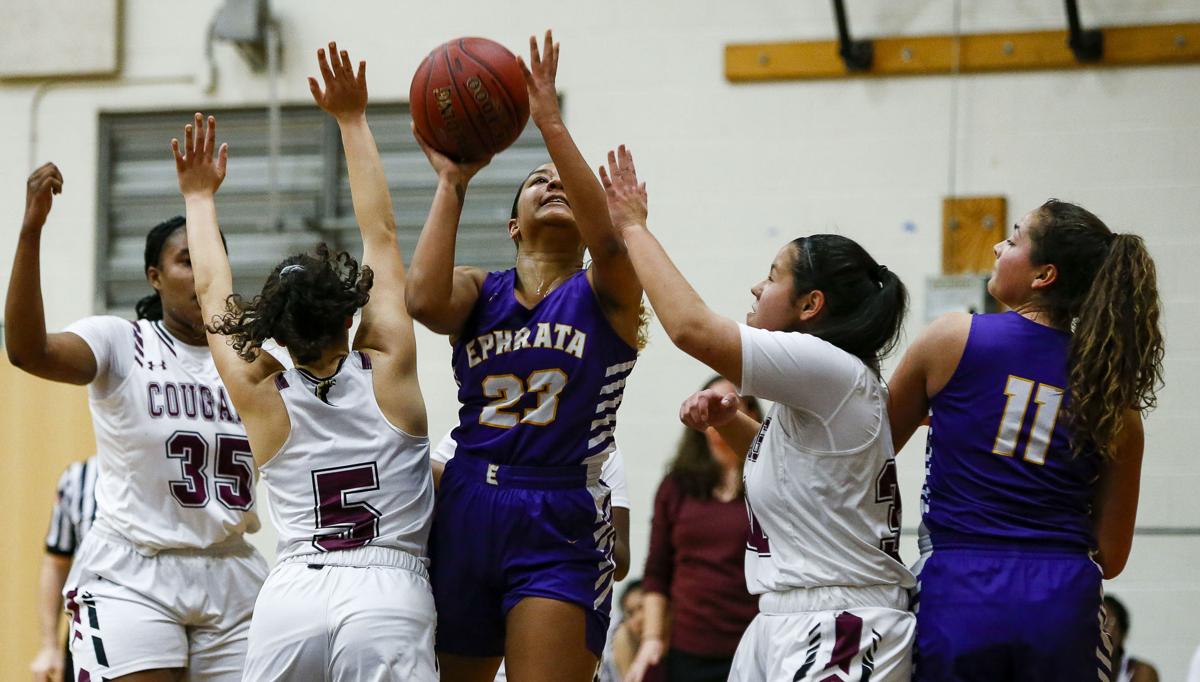 #35 Ashanti Duncan gets the rebound during the first quarter against #11 Jocelyn Umana and #24 Hannah Plowmaker.

#5 Kaela Stankiewicz looks to pass across the court against #23 Gabbie Gerola-Hill.

#10 Genesis Meadows recovers the ball during the fourth quarter.

Ashanti Duncan challenged herself to step up and play big on the boards on Saturday, when Lancaster Country Day welcomed Ephrata for a Lancaster-Lebanon League girls basketball quarterfinal-round showdown.

Duncan poured in 19 points and pulled down 23 rebounds, and the host Cougars beat the Mountaineers 49-40 to earn a spot in Tuesday’s semifinals opposite two-time defending champ Lancaster Catholic, which fended off Manheim Township 53-45.

Country Day vs. Catholic is Tuesday at 7:30 p.m. at Conestoga Valley.

“I had a little talk with my teammates before the game,” Duncan said, “and I knew I had to play my very best because we all really wanted to get this one.”

Country Day got it. And Duncan dominated.

“We knew coming in that she was a good player, and she destroyed us,” Ephrata coach Brian Cerullo said. “It was hard to match her physicality.”

Country Day out-rebounded Ephrata 46-25, and the Cougars (19-2) opened the game on a 14-2 run and never trailed. Genesis Meadows scored 13 points — including a pair of dagger fourth-quarter 3-pointers — and Kaela Stankiewicz chipped in with 10 points for Country Day, the Section Five champ.

“This is absolutely huge for us,” Country Day coach Hilary Waltman said. “It’s our second year in the league, and to make the final four in the L-L League, as a little Single-A school … it’s because of the heart of this team, and the togetherness of this team.”

Ephrata, the Section Two champ, couldn’t overcome 16 turnovers and some streaky shooting. The Mounts trailed 16-5 after the first quarter and were constantly playing uphill.

“It was huge to come out like that and get a quick start,” Waltman said. “It settled some nerves.”

One big bright spot for Ephrata: Brynn Adams popped up off the bench and drilled six 3-pointers, including three fourth-quarter treys when the Mounts (17-6) made a last-gasp effort. Earlier, Adams’ 3-pointer cut Country Day’s lead down to 28-25 with 1:03 to go in the third quarter.

Country Day also got a boost from Annabelle Copeland, who was back on the court after missing the last three games with a nagging injury. She had a key buzzer-beater bucket on Saturday.

“We were ice-cold to start the game and then ice-cold in the third quarter, and that’s when they were able to build their lead,” Cerullo said. “We just weren’t able to get anything going. We never really had any momentum going our way.”

With Duncan owning the boards and helping out on defense when Ephrata tried to drive the lane, Country Day held the Mounts’ leading scorers in check; Gabbie Gerola-Hill had just 10 points, and Jasmine Griffin had just one bucket as Ephrata — other than Adams making 3’s — never really found its groove.

“We wanted to start out with a bunch of energy, because we knew they were going to bring it with their shooters,” Duncan said. “So we wanted to stick with our matchups and be disciplined and bring everything we had to the court.”

If you have Pequea Valley, Solanco, Lancaster Catholic and Lancaster Country Day in your Lancaster-Lebanon League girls’ basketball playoff of…