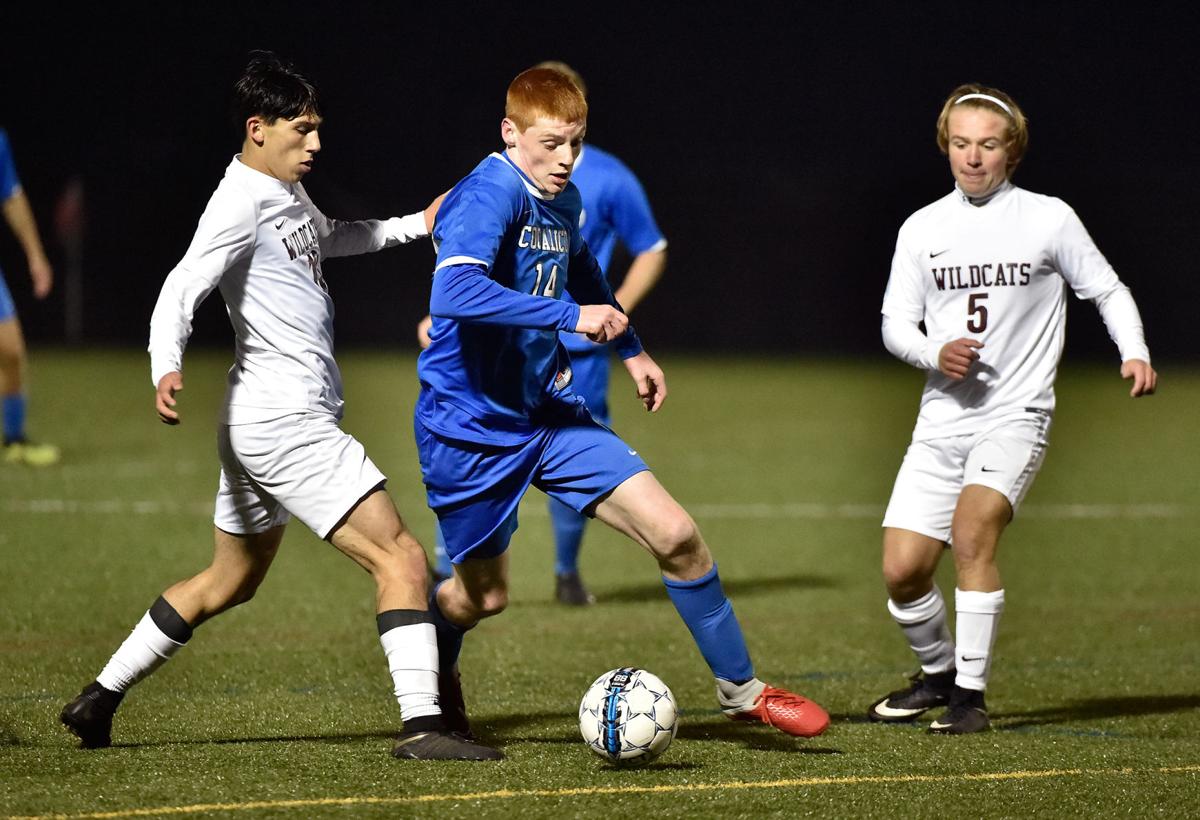 Cocalico's Aaron Weitzel (14) maneuvers the ball against Mechanicsburg's Will Gallagher (13) as teammate Logan Ledebohm (5) watches the action during the District 3 Class 3A quarterfinal on Thursday, October 25, 2018. 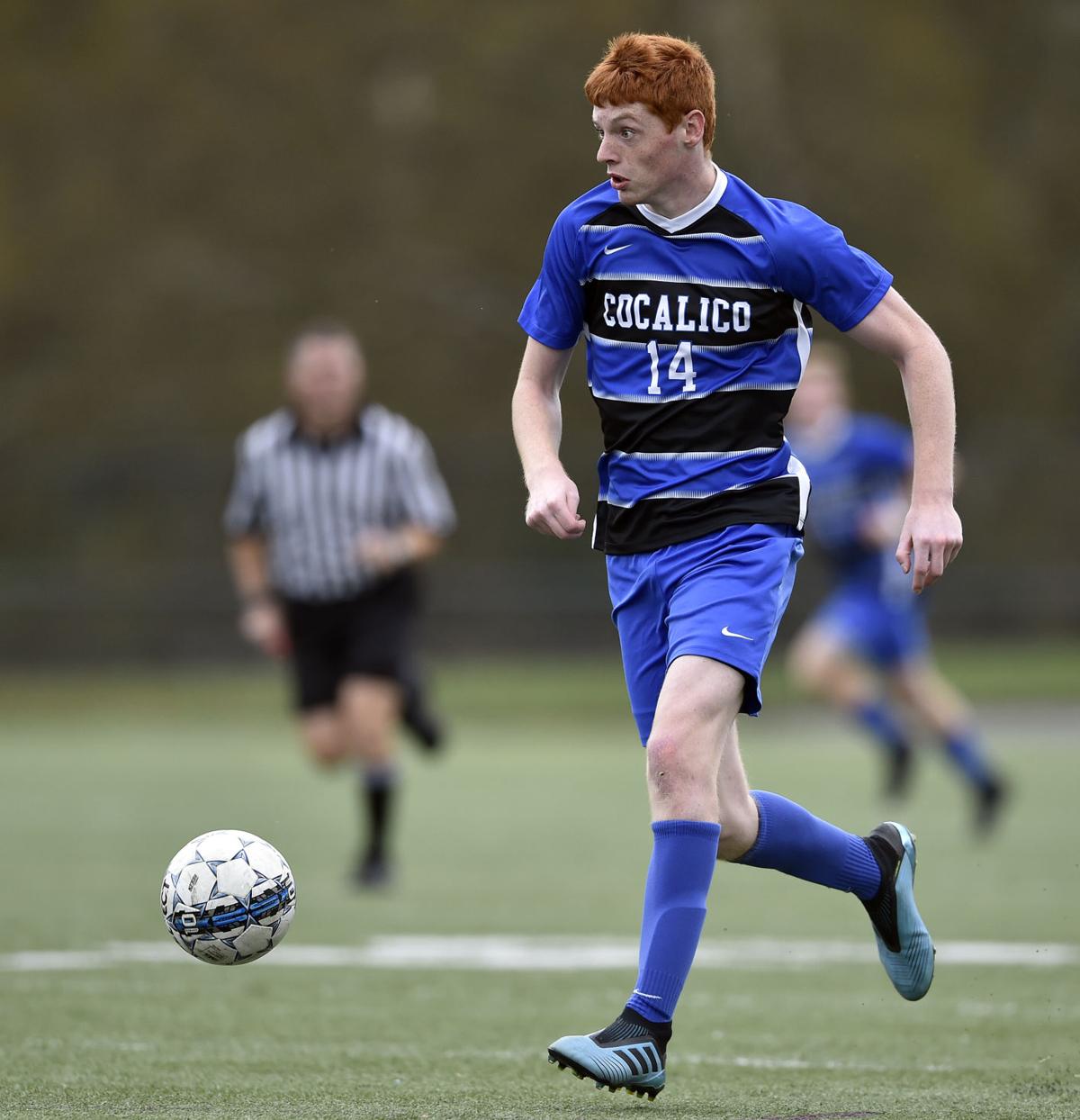 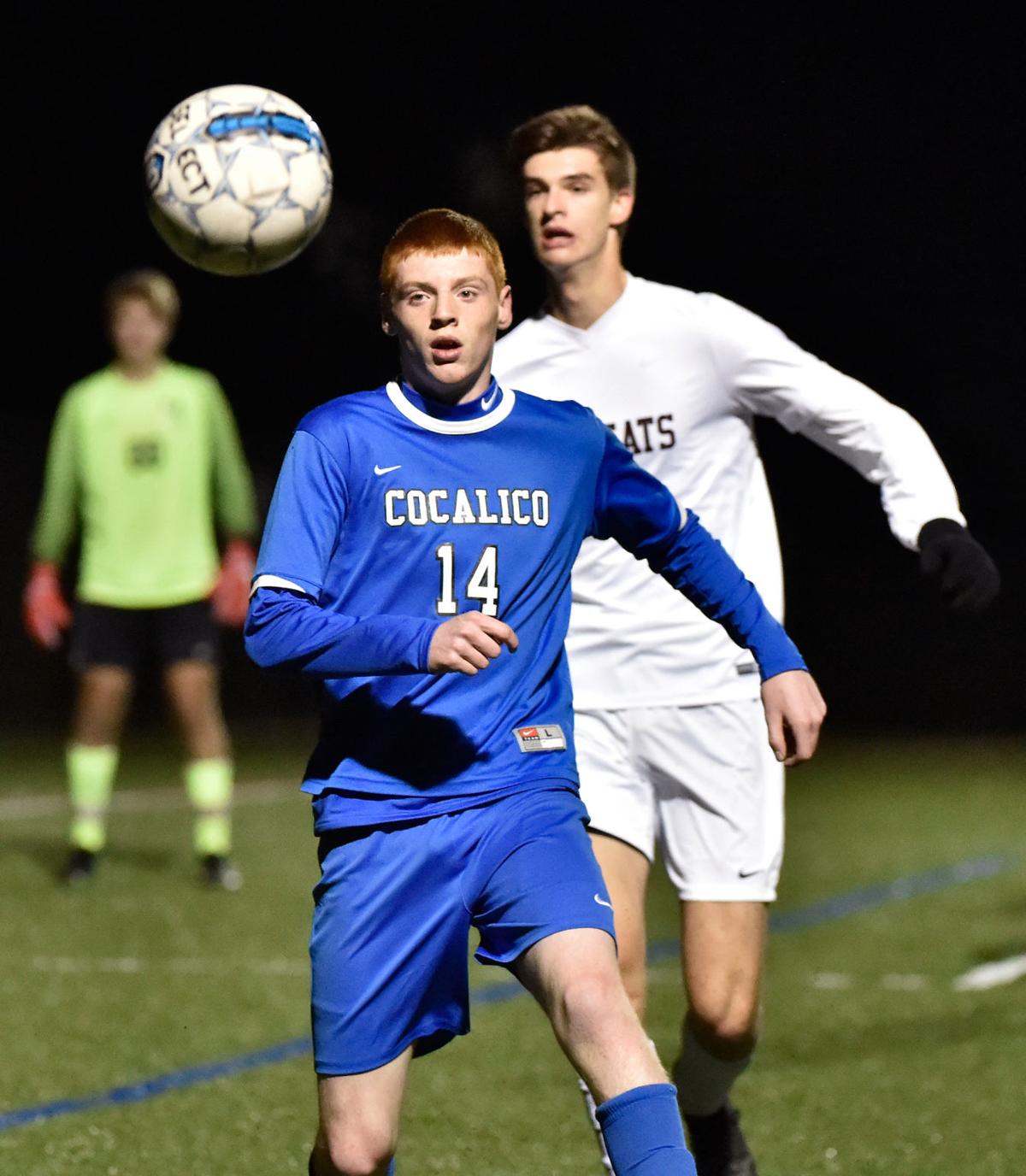 Cocalico's Aaron Weitzel (14) keeps his eye on an inbound ball against Mechanicsburg's Sean Strohl during the District 3 Class 3A quarterfinal on Thursday, October 25, 2018. 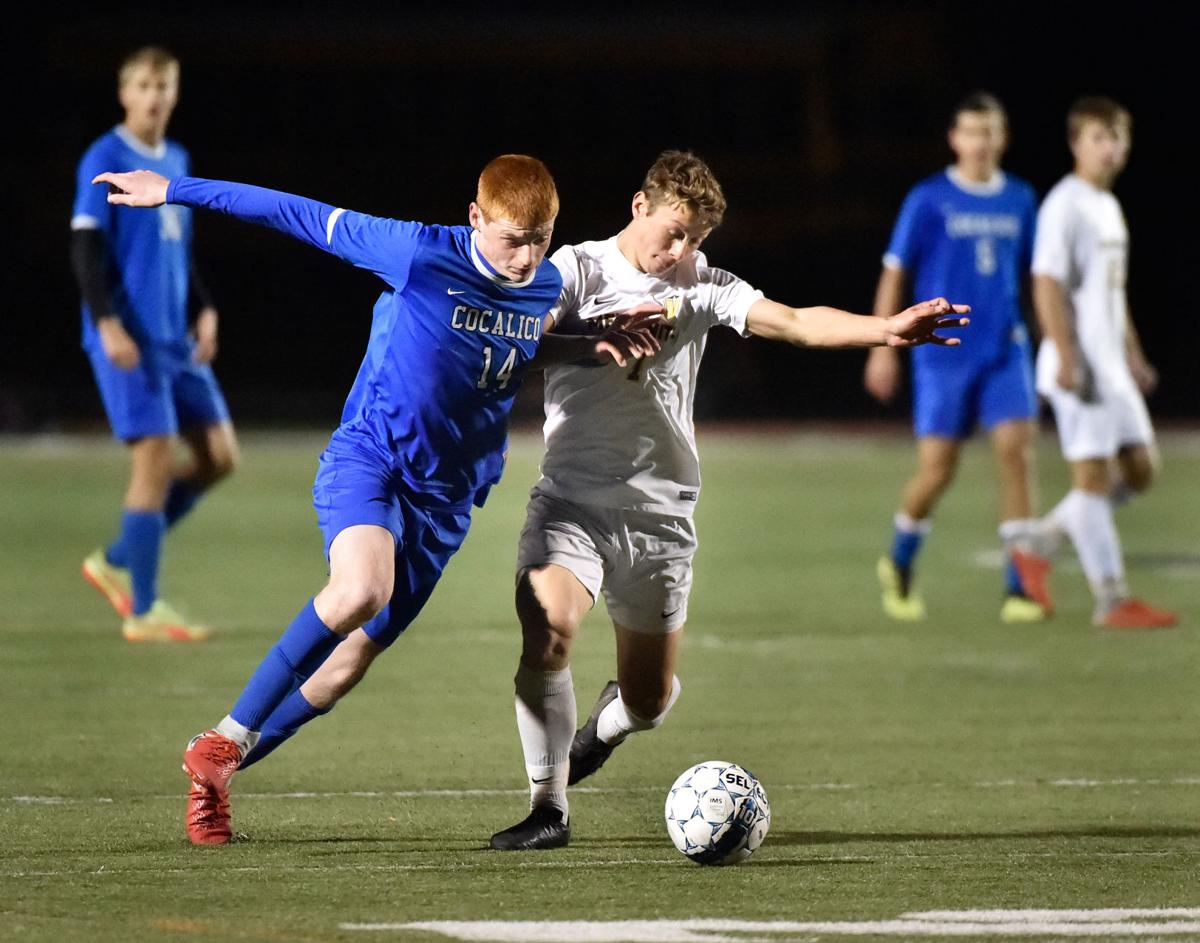 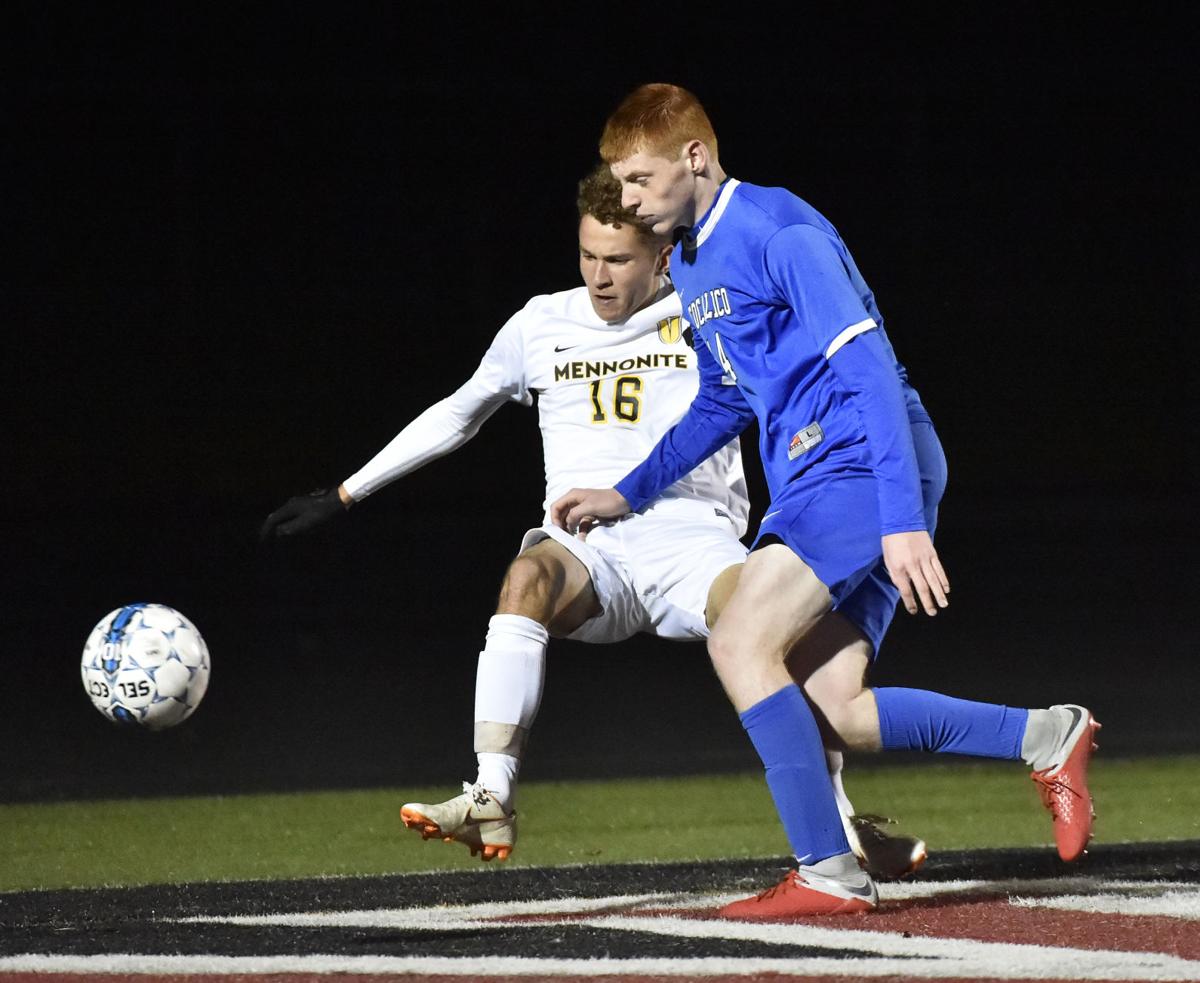 Cocalico's Aaron Weitzel (14) maneuvers the ball against Mechanicsburg's Will Gallagher (13) as teammate Logan Ledebohm (5) watches the action during the District 3 Class 3A quarterfinal on Thursday, October 25, 2018.

Cocalico's Aaron Weitzel (14) keeps his eye on an inbound ball against Mechanicsburg's Sean Strohl during the District 3 Class 3A quarterfinal on Thursday, October 25, 2018.

He will be one of the top returning strikers on the pitch in Lancaster-Lebanon League soccer this fall.

He's the reigning Section Three MVP, and he was a first-team league all-star and Pennsylvania Soccer Coaches Association all-state pick last season, when he helped his squad successfully defend their section crown and win a district playoff game for the second year in a row.

He's a staunch English Premier League fan and self-proclaimed student of the game, and while he has a penchant for scoring goals and making an offense churn, he's all about helping his team win.

Say hello to Cocalico rising senior forward Aaron Weitzel, the Eagles' playmaker du jour. When it comes to offensive moves and getting the ball on goal, he has all the right moves. But he also has a terrific head on his shoulders, and he understands the nuances of the game.

“Being a striker, it's not always about the glory," Weitzel said. "It's about setting other people up and helping out your team. Once I knew I was going to be playing up front, I dug in and I got into it. I was kind of a young gun out there, fighting for my spot as a freshman here. So I put in the time and I kept grinding. You have to grind. You need that determination and grit in your game."

End result: Weitzel buried 11 goals and added five assists last season, one year after helping Cocalico win 19 matches, including the L-L championship for the program's first league gold trophy. He was a double-digit goal-scorer during that spirited run in his sophomore campaign.

"People think being a striker is all about scoring, and I understand that," said Weitzel, an athletic 6-foot-2, 190-pounder. "You win a game by scoring goals. But it's not all about the glory. For me, a win comes before scoring goals."

"In the world game, strikers kind of have the reputation of being divas," Cocalico coach Derek Sipe said. "It's different at the high school level, because we need those types of guys who can create opportunities on their own. When you have a player like that, it's a game-changer."

Weitzel, a goalie earlier in his career, is definitely a game-changer. And a lot of that has to do with how he studies the game. Big brother Ryan, a former Cocalico goalie, got Aaron hooked on the EPL, which he watches religiously, studying players like Chelsea teammates Eden Hazard and Antonio Rudiger.

"Here in America, people don't always look at soccer as a big sport," Weitzel said. "But around the world, soccer is one of the biggest sports out there. I know I learn something from watching all the time, and you can incorporate it into your game. From watching those guys, I've learned that I have to apply myself more. You need that drive and that intensity to play better. You need that faith in yourself that you're going to go out and have a good game every single time."

For Weitzel, that means being fundamentally strong and mentally prepared. Knowing the personnel and defenders around him. Thinking a play or two ahead so he knows where to go and where to be. And yes, scoring goals and being ready to shoot in crunch time.

Weitzel has the physical skills and the mental part of the game down quite well for a prep player, hence his numbers, league-wide respect and Cocalico's success. Local college programs have also taken notice; he's considering Lock Haven and Lebanon Valley College as potential destinations to play at the next level.

The proof is in the pudding: With Weitzel up front, Cocalico has won back-to-back section titles, the league crown in 2018, and won a first-round district playoff match the last two years in a row.

So there should be plenty of bull's-eyes on the Eagles this fall, and Weitzel should see any number of different defensive looks, as opponents try and keep him out of the box and off the ball for as long as possible.

"Aaron has size and speed and technical ability, and he walked in with those abilities right away," Sipe said. "He has all of those things, and that gives you the opportunity to be a special player. Add on his work ethic, and you can tell he wants to be a special player. When you have the tools, and couple that with the drive and the persistence and the determination like he has, you're going to be a really good player. And he's been able to do that. He's been able to do a little bit of everything for us."

And all of it quite well.

What the science says about coronavirus, cold weather, and steps you can take to stay safe

Something had to give.

The legs were a little fresher and the pace was a little too much Wednesday, as McCaskey sprinted to 3-0 victory over Cocalico in the Lancaste…

Below is a list of Lancaster-Lebanon League boys soccer all-stars for the 2020 season. The selections were made by L-L coaches. A Player of th…