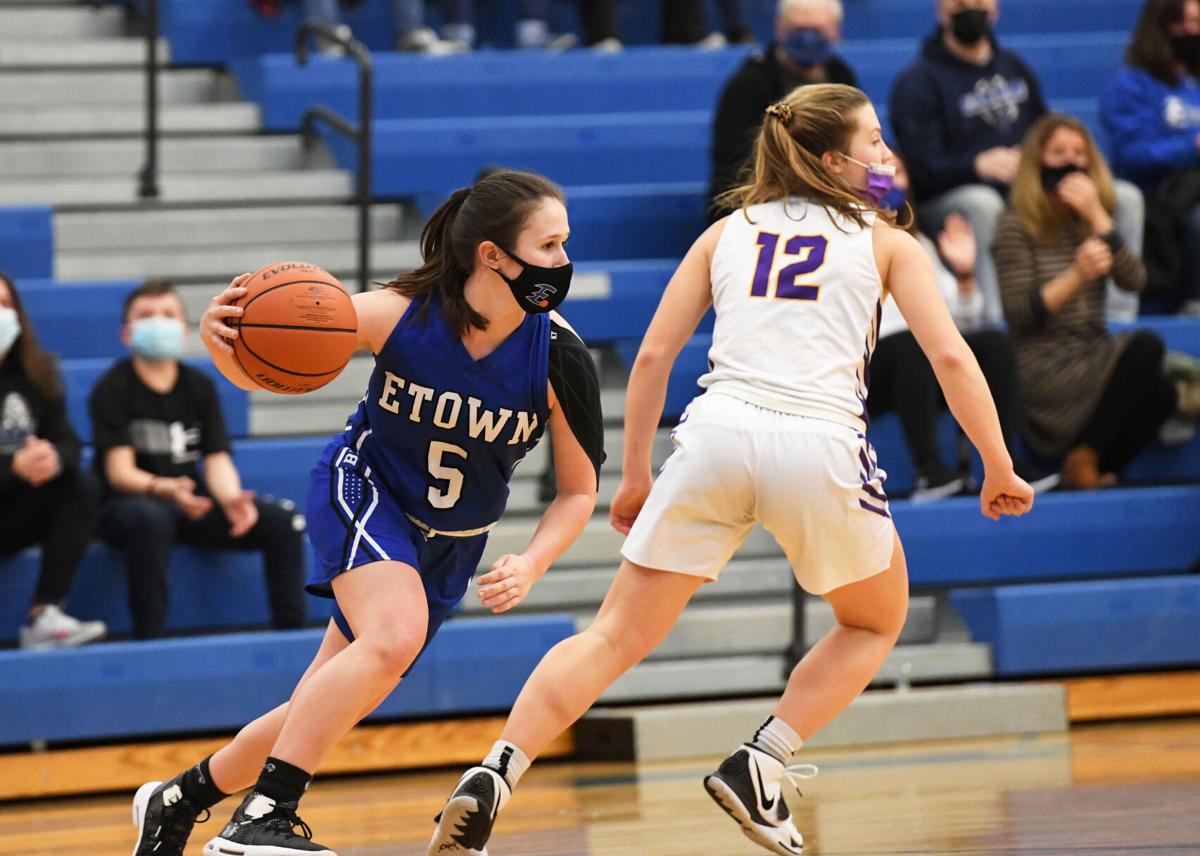 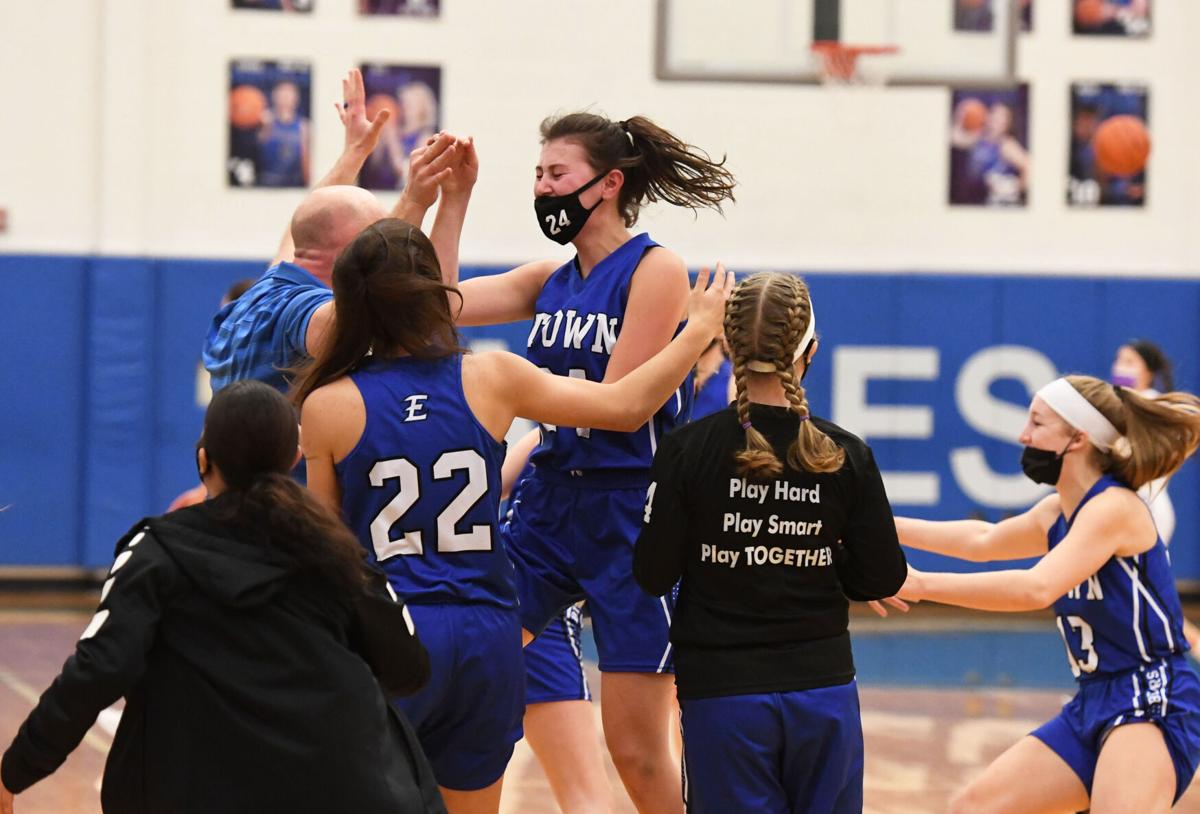 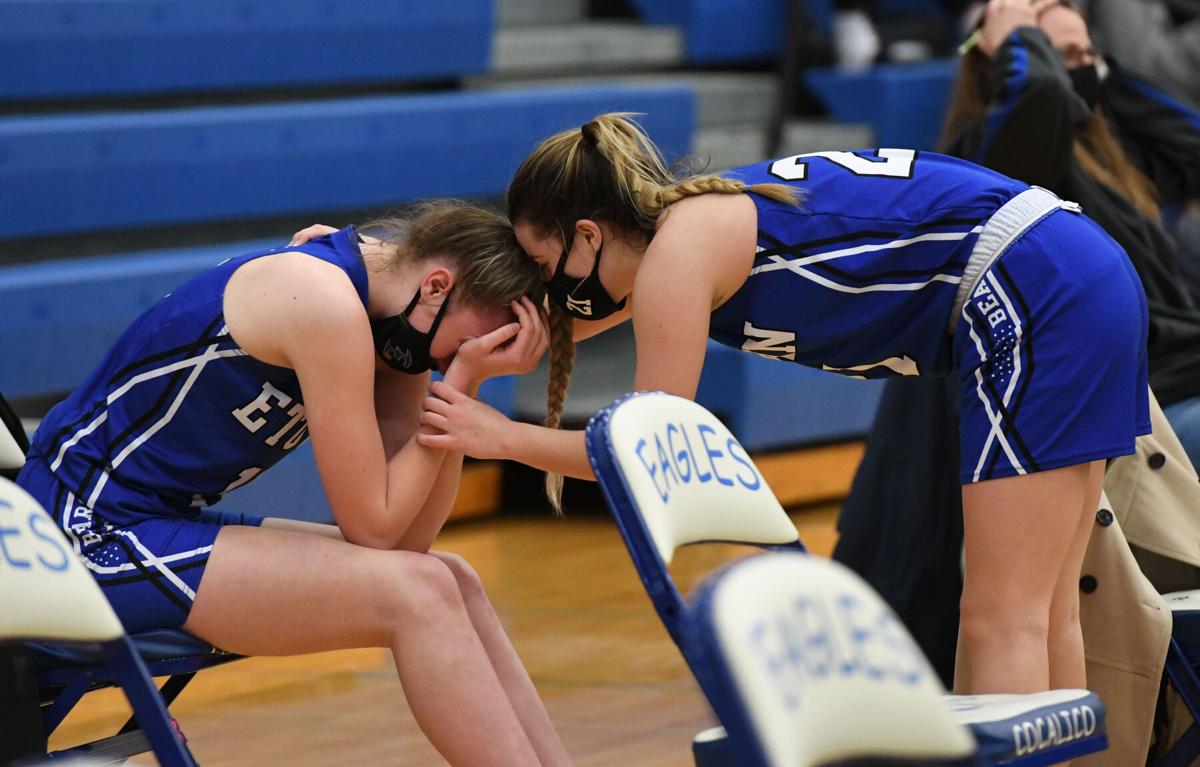 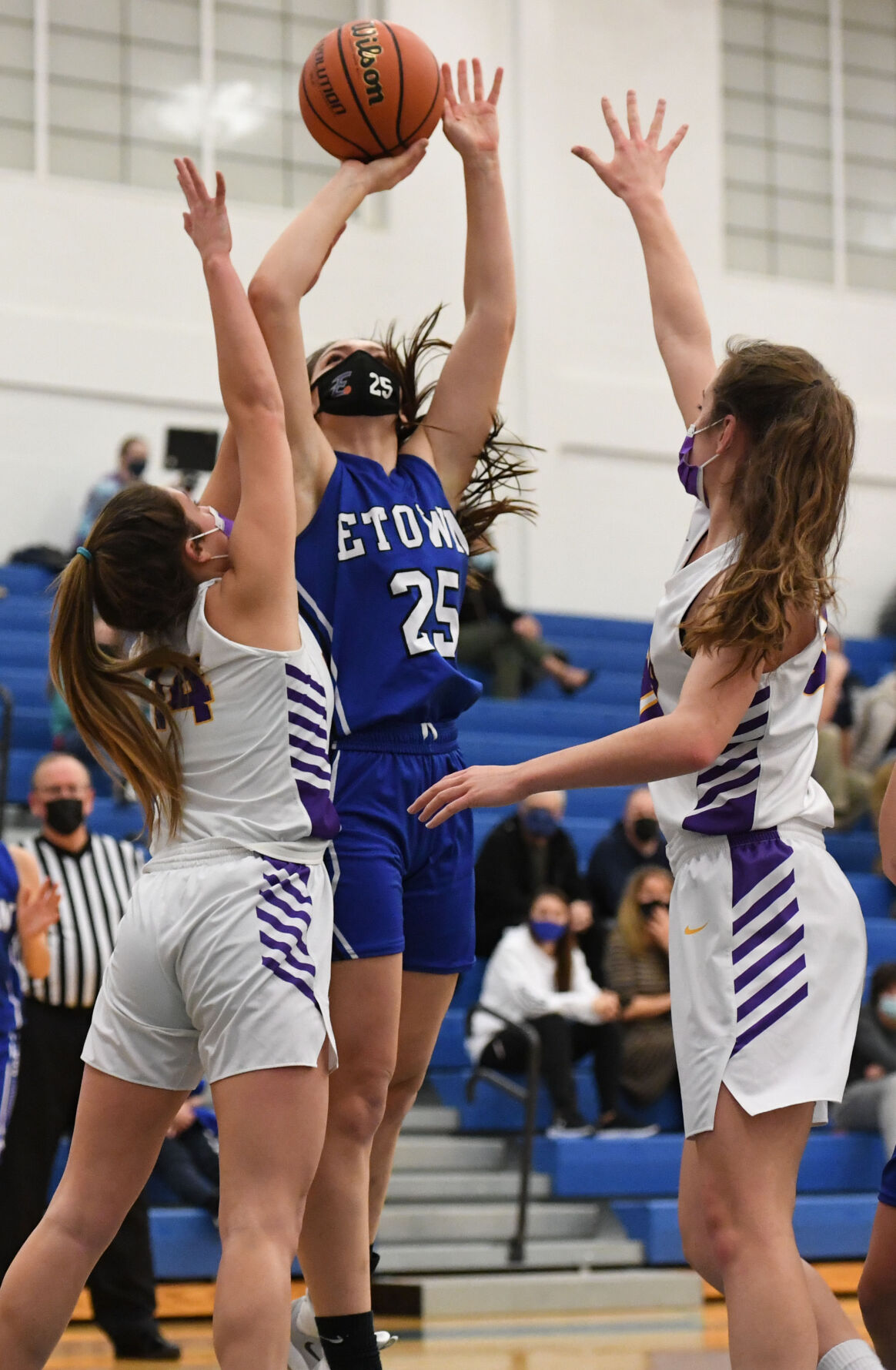 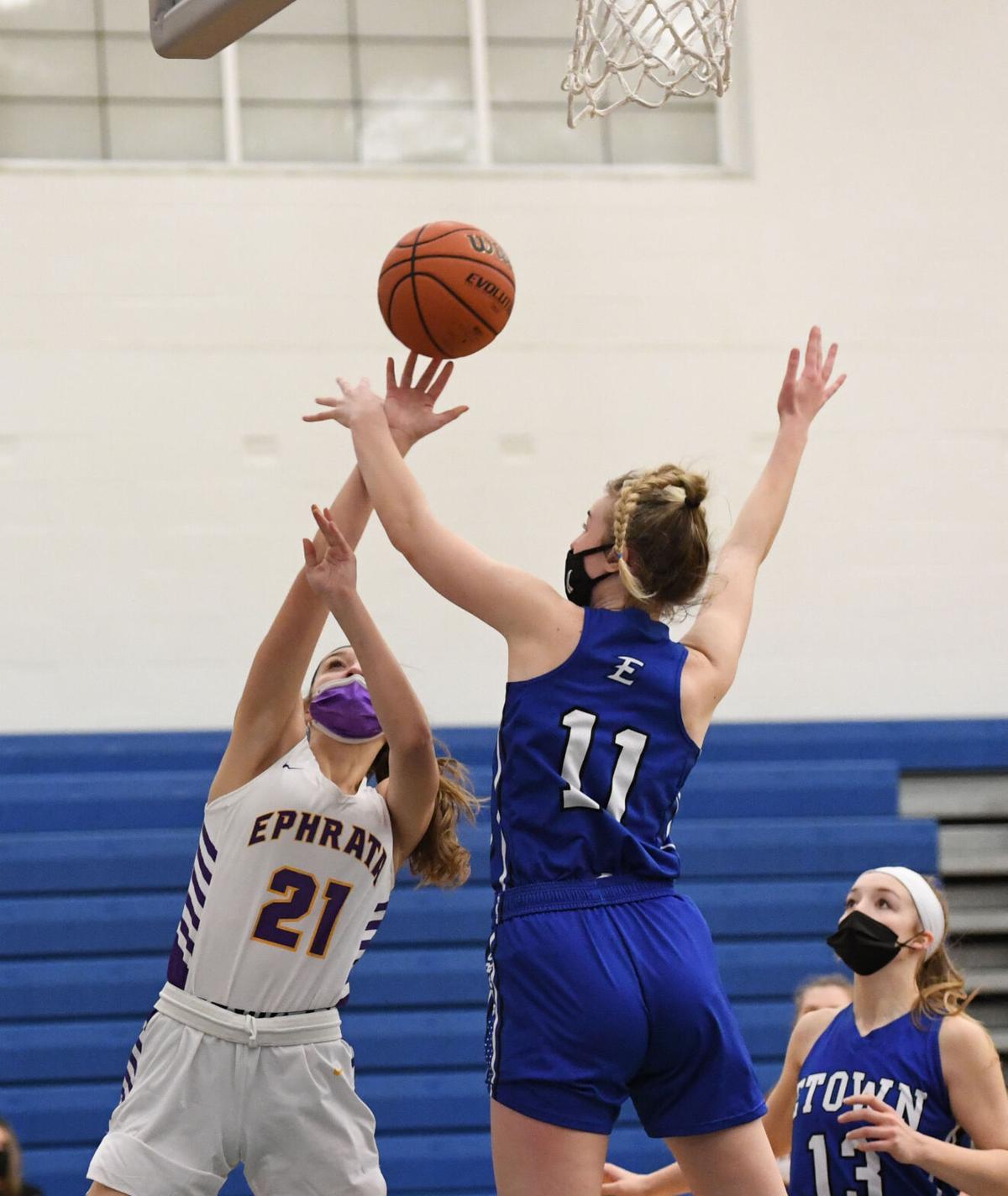 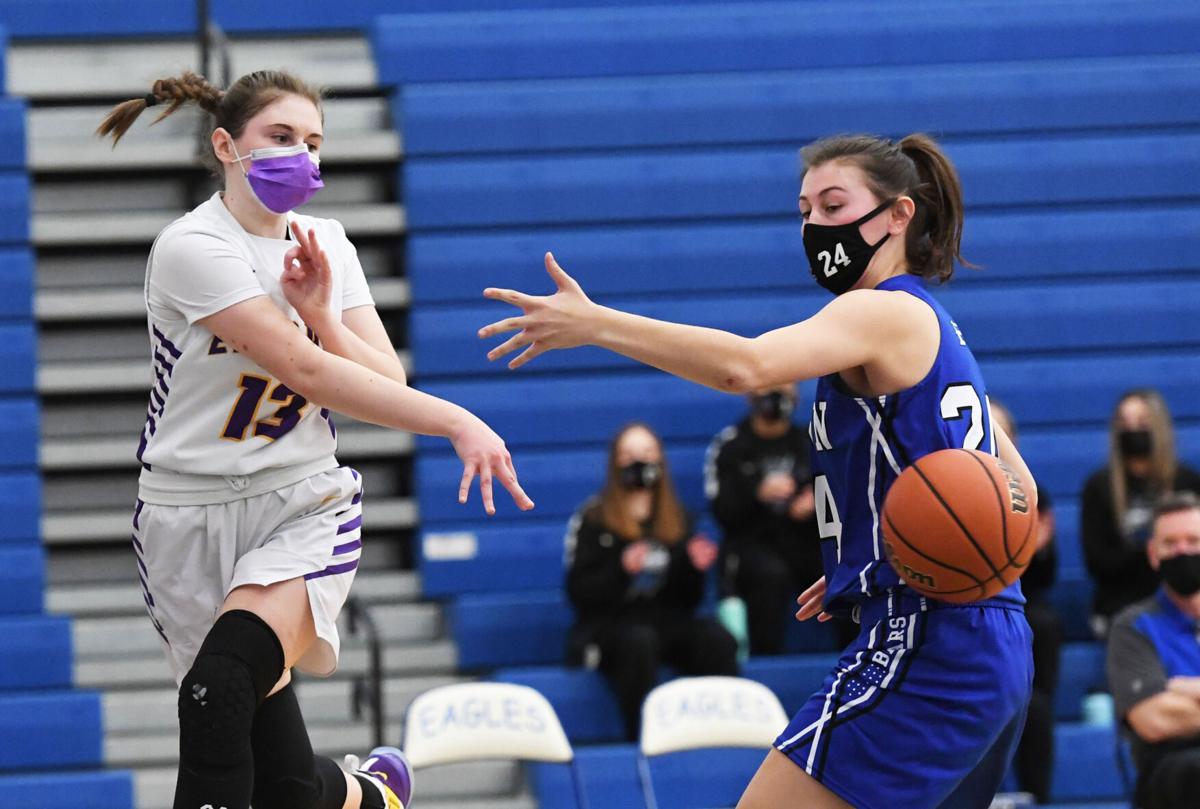 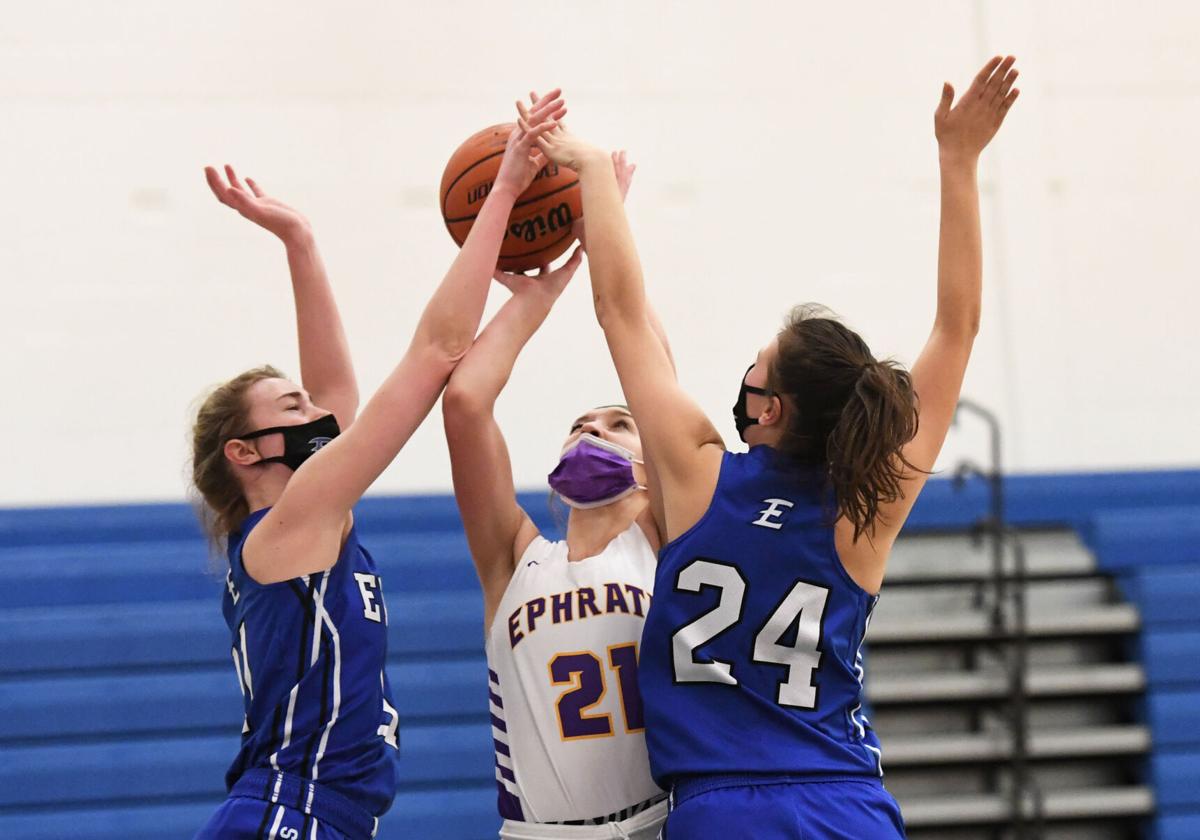 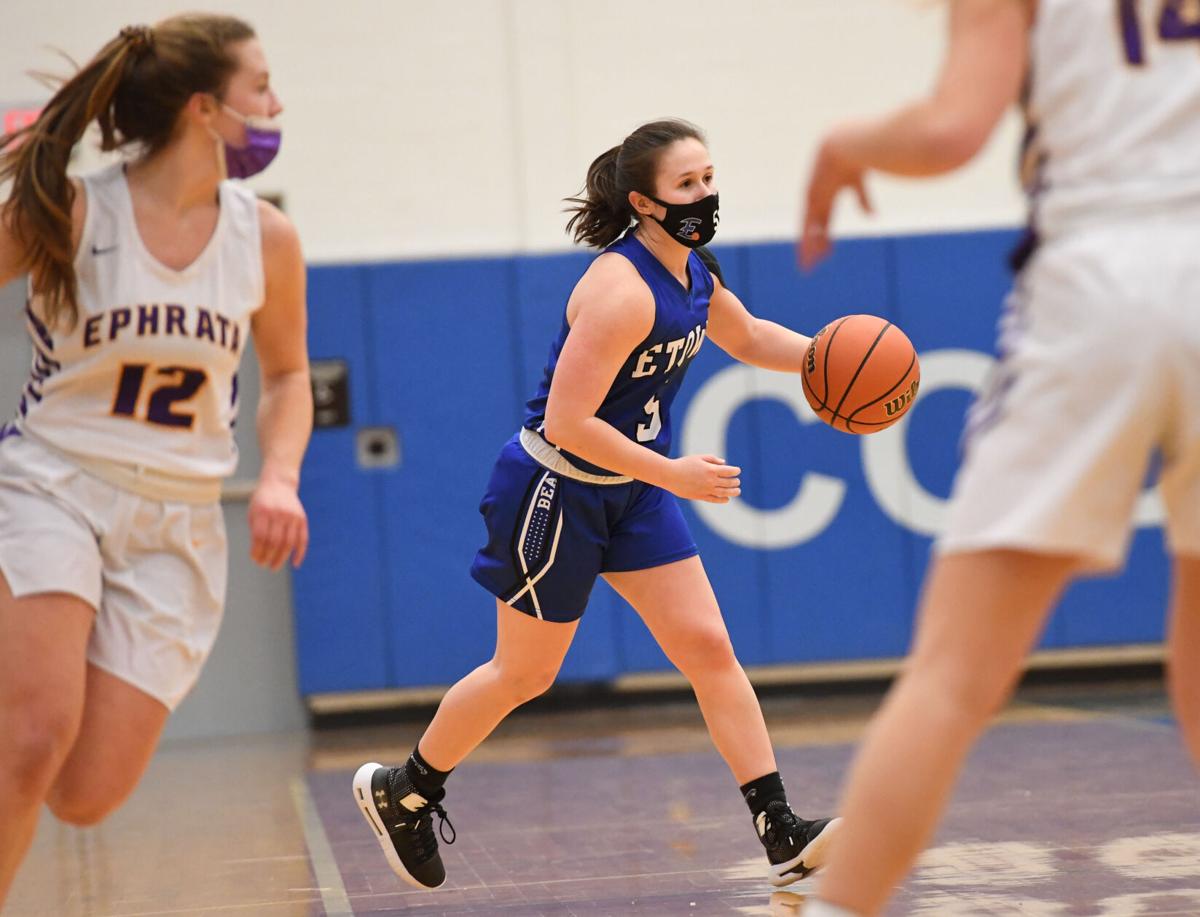 Elizabethtown’s Ainsley Raybold looks for the opening to pass the ball against Ephrata during the first-half action of an L-L League Section 2 play-in 1- game playoff girls basketball at Cocalico high school Monday Feb. 22, 2021. 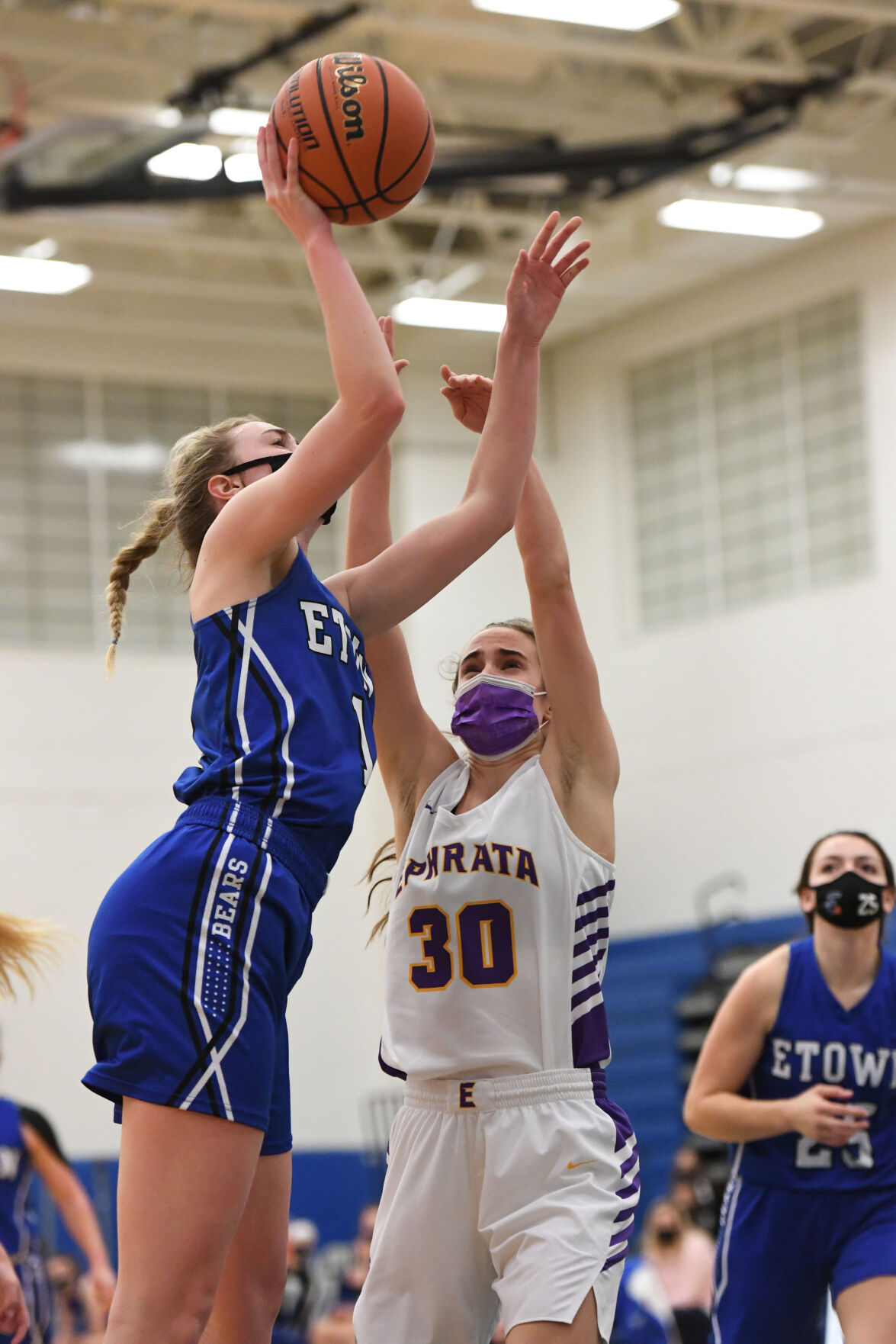 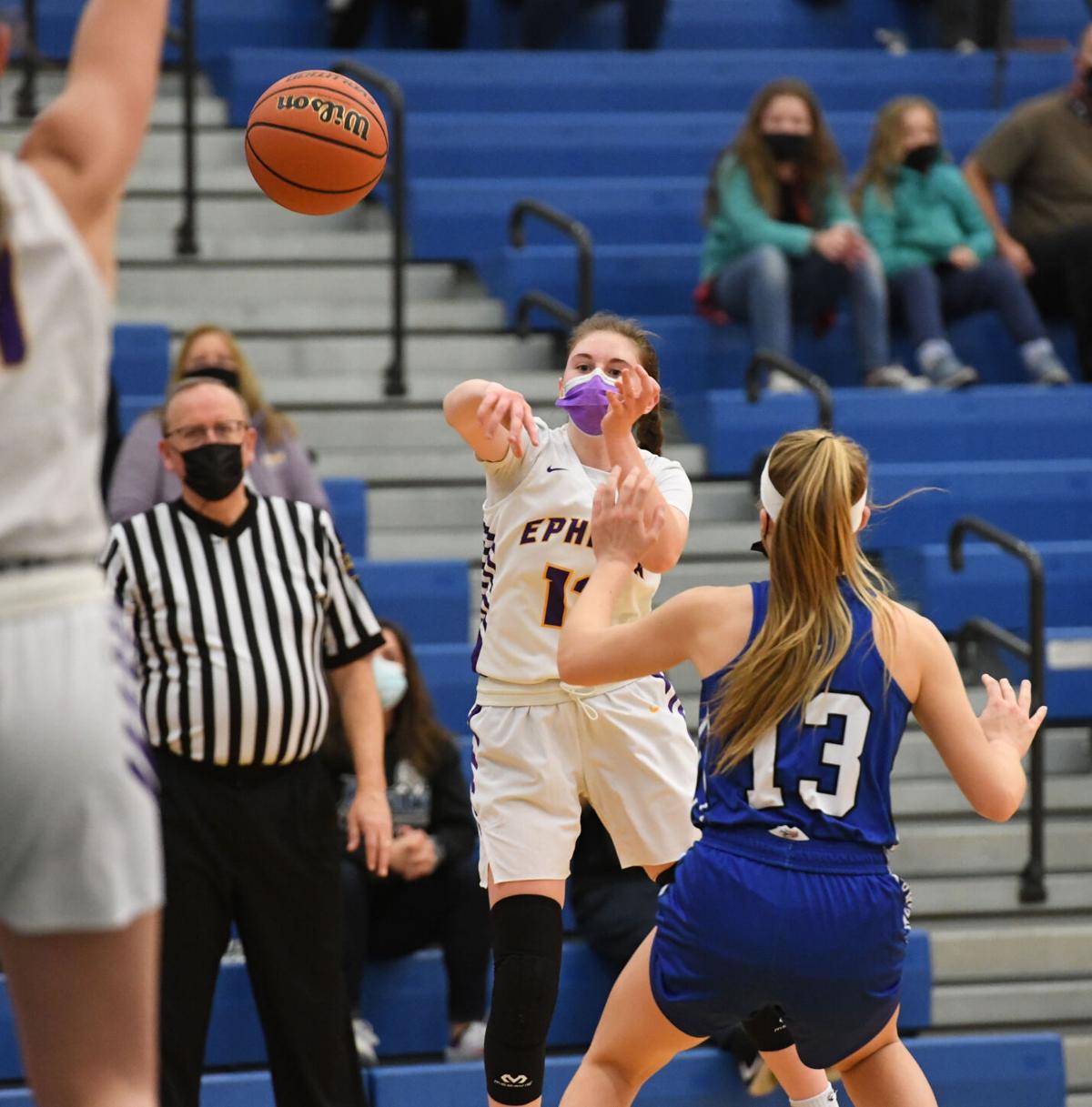 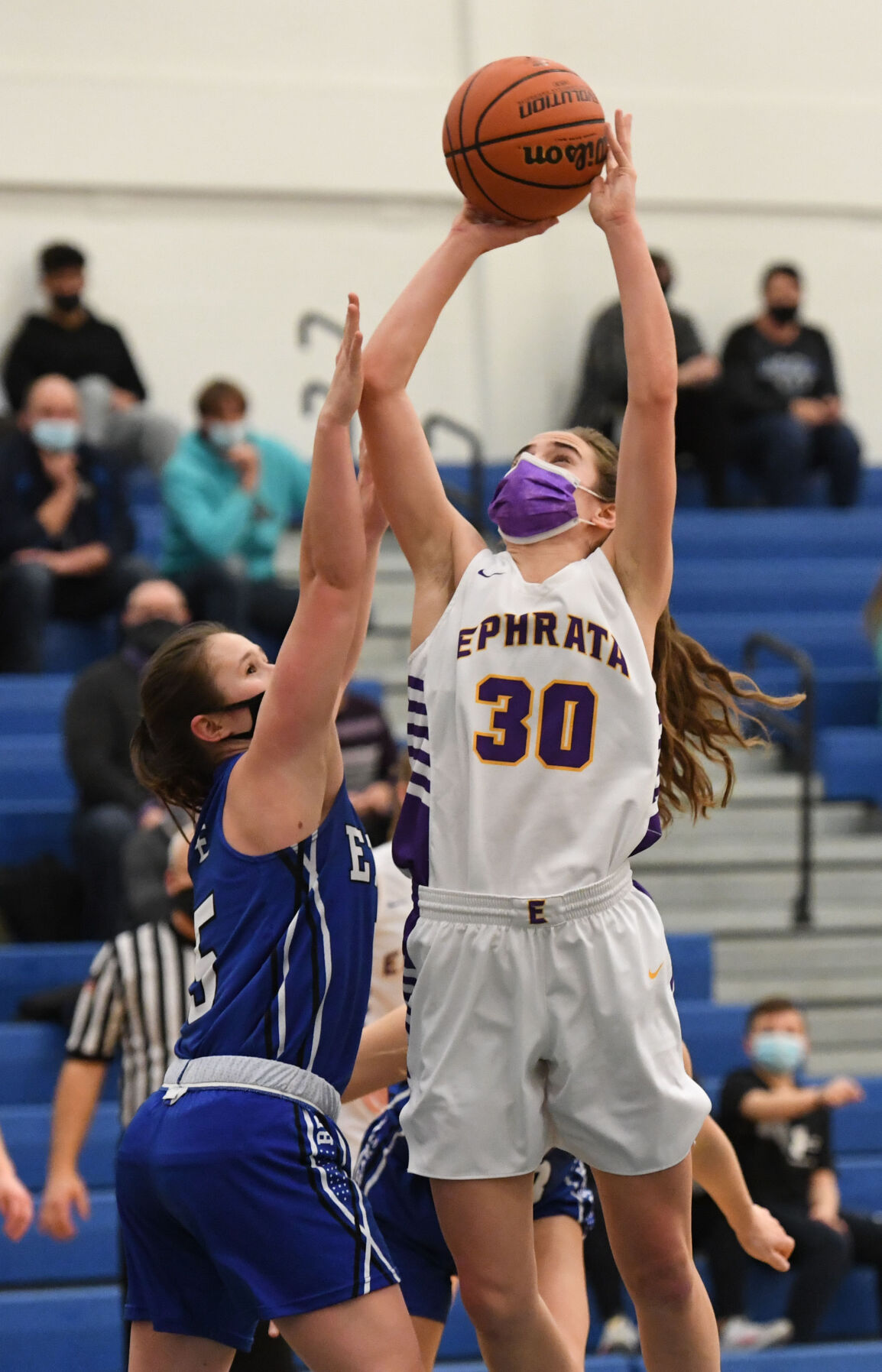 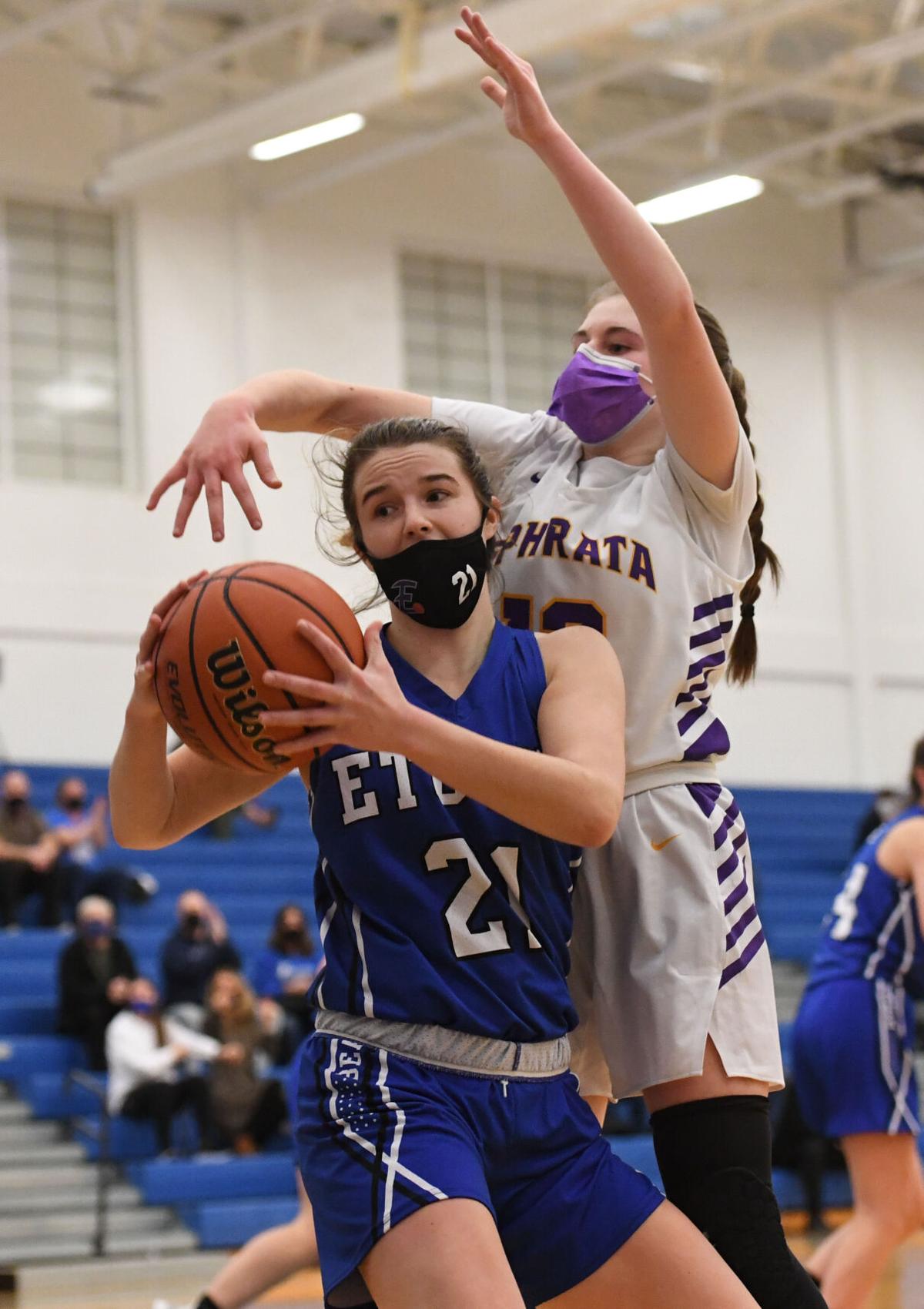 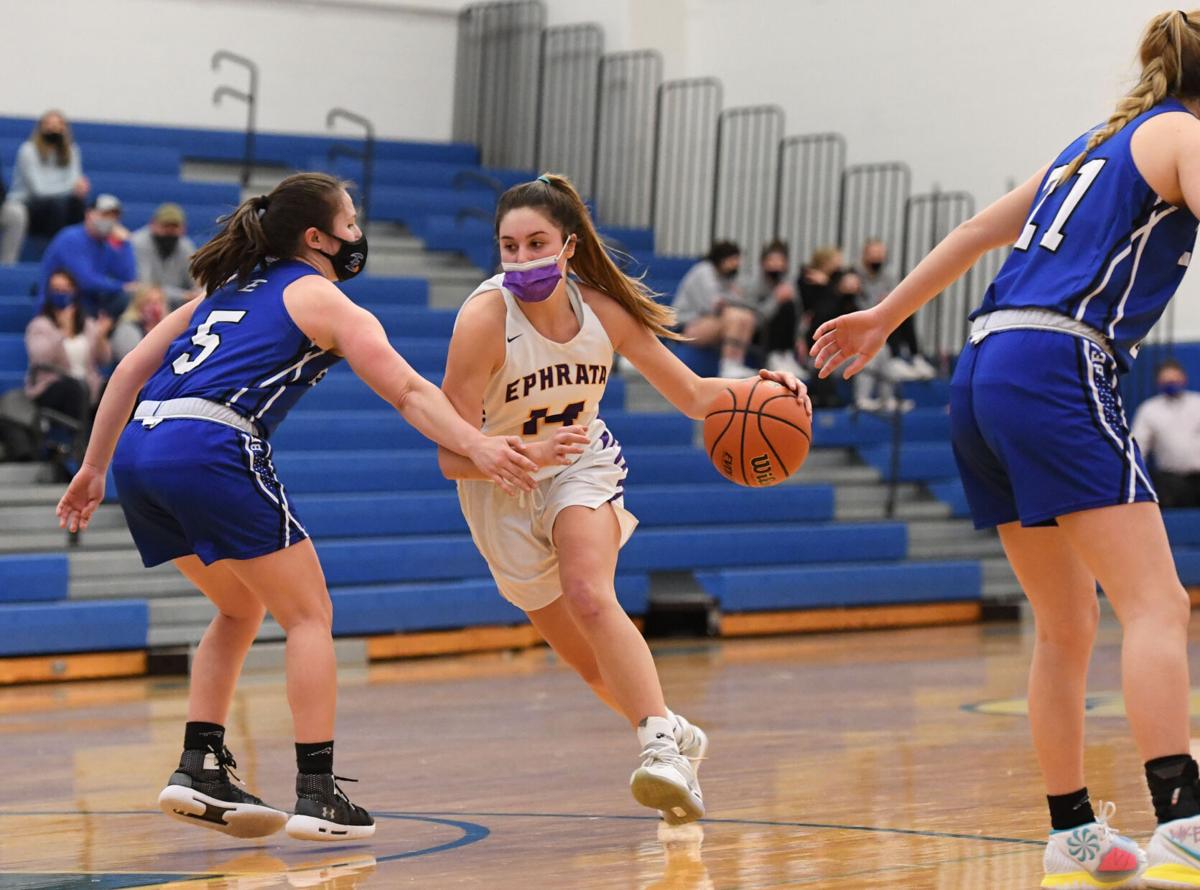 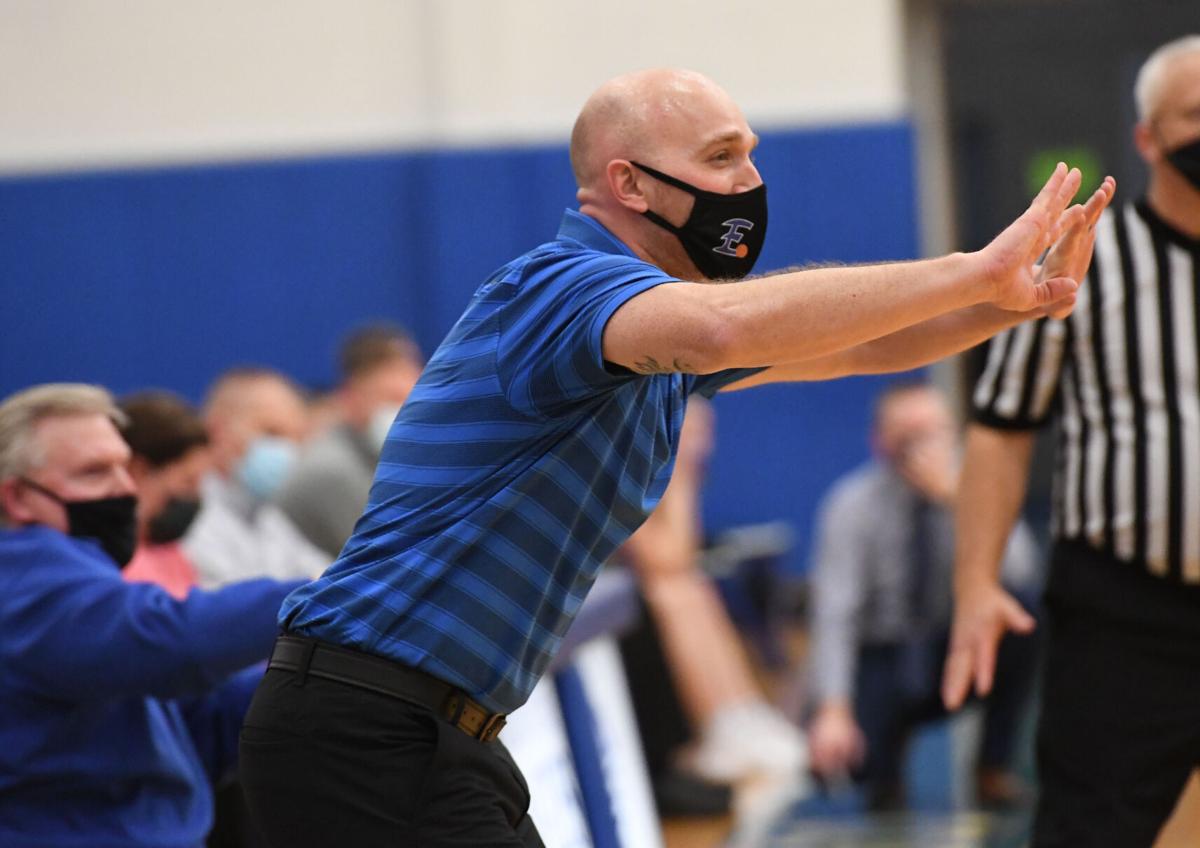 Elizabethtown’s Ainsley Raybold looks for the opening to pass the ball against Ephrata during the first-half action of an L-L League Section 2 play-in 1- game playoff girls basketball at Cocalico high school Monday Feb. 22, 2021.

Ainsley Raybold will be the first person to tell you that she hasn’t exactly been shooting the lights out this basketball season.

But Monday night, Raybold made buckets. Big bucket after back-breaking bucket in crunch time, when Elizabethtown needed them most.

Raybold drilled four second-half 3-pointers, including a pair of game-changing fourth-quarter treys, plus another must-have jumper down the stretch, and the Bears rallied from a 12-point first-half deficit to stun Ephrata 47-43 at Cocalico in a one-game playoff between the Section 2 co-champs for a spot in the L-L League bracket.

End result: E-town (11-2 overall) will pile right back on the bus and take the same route to Denver on Tuesday for a quarterfinal showdown against Section 3 champ Cocalico (13-2) at 6 p.m. The winner there is off to the league semifinals on Thursday to take on Section 4 champ Lancaster Catholic (10-2) at 7 p.m.

Monday, E-town punched its ticket into the main bracket compliments of a spiffy comeback against shell-shocked Ephrata.

“We were getting good looks in the first half, but they weren’t falling,” E-town coach John Myers said. “We said to keep running the offense and to keep getting looks, and they’ll start falling. And we had to keep rebounding like animals, which is one of our strong suits. We stuck with it, and we finally started making shots.”

In money time, which was large.

For a good chunk of Monday’s game, it sure looked like Ephrata would be making the short bus ride back to Denver on Tuesday. But the Mountaineers — who had a 24-12 lead with 1:27 to go in the second quarter, and a 34-23 cushion with 1:57 to play in the third quarter — couldn’t slam the door.

After a sluggish start, Ephrata (10-4) got the first run, and it was a beauty.

Jasmine Griffin (17 points) went reverse layup, steal and run-out layup, and steal and pull-up jumper for a 6-0 spurt and an 11-8 lead. And in the second quarter, the Mounts used a 10-0 burst to seize control; Olivia Fedorshak scored in the post, Destiny Lefever had a conventional three-point play, Griffin hit a jumper and added another conventional three-point play, and Mallory Kline’s top-of-the-key 3-ball capped the spree for a 24-12 lead.

Ephrata took a 24-14 lead into the locker room.

Undaunted, E-town started chipping away in the third, and when Raybold splashed her second trey of the quarter, the Bears were within 34-25 and gaining momentum.

Four key components of E-town’s fourth-quarter comeback: First, Elise Hassinger (9 points, 11 rebounds) and Carly Sedun (9 points, 14 boards) combined to pluck nine rebounds down the stretch, which was enormous, as the Bears won the rebounding battle by a solid 41-26 count. Second, Jade Love-Morris got the arc vibes going with a trey and E-town was within 36-32.

“Ainsley really came up big for us,” Myers noted.

“We came out more determined in the second half, and we really started knocking down shots,” Raybold said. “The flow of the game was so much better, and we were connecting more. The first half we were all out of sorts. That flow wasn’t there. In the second half we started feeling more like ourselves, and the shots started falling.”

“It’s a game we had, but we couldn’t close it out,” Mounts’ coach Brian Cerullo said. “We felt good at the half, but it seemed like we just didn’t have enough energy. We knew we had to try and pack it in and stop their inside game and get rebounds. But they made shots.”

Especially Raybold, who was money for the Bears.

NOTES: E-town survived 15 turnovers, but the Bears only had four giveaways in the second half, when they made their comeback. … Ephrata only turned the ball over eight times, four per half. … The complexion of the game changed with 1:57 to go in the third quarter when E-town’s 6-foot-2 enforcer, Macy Seaman, hobbled off after turning an ankle. She had a bucket, six rebounds and three blocked shots up to that point, but didn’t return. That loss only seemed to fuel Hassinger and Sedun, who both crashed with authority in the fourth quarter. … The closest Ephrata got late: 44-43 with 24 ticks left, when Brynn Adams knocked down a 3-pointer. Love-Morris hit a couple of foul shots at the other end for E-town, and the Bears sealed the deal.

It was furious at times and a mess at times, but in the end, as usual, it was Lancaster Catholic.

With only the section champions advancing to the L-L League girls basketball playoff bracket this season, that means just one quarterfinal gam…