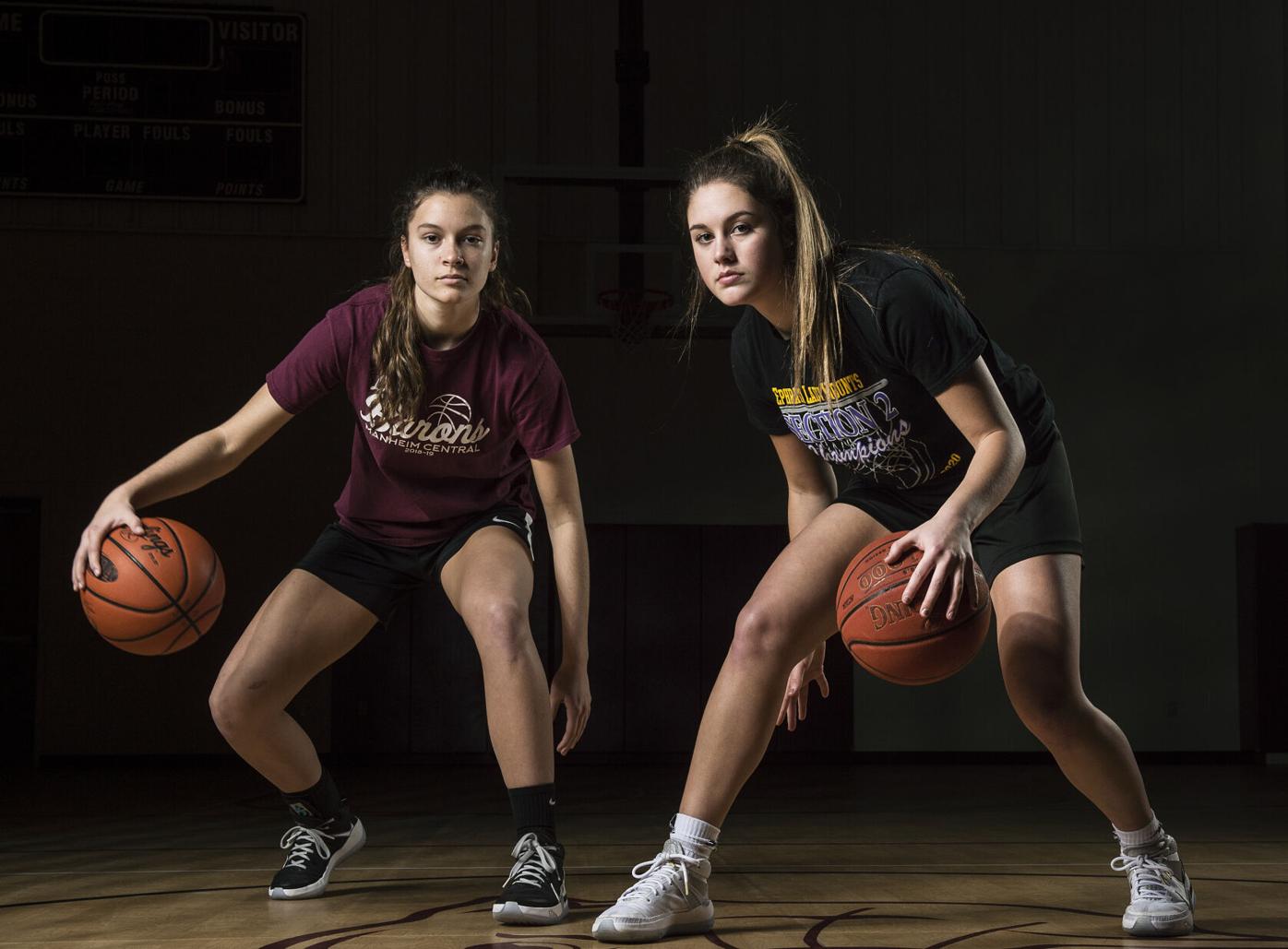 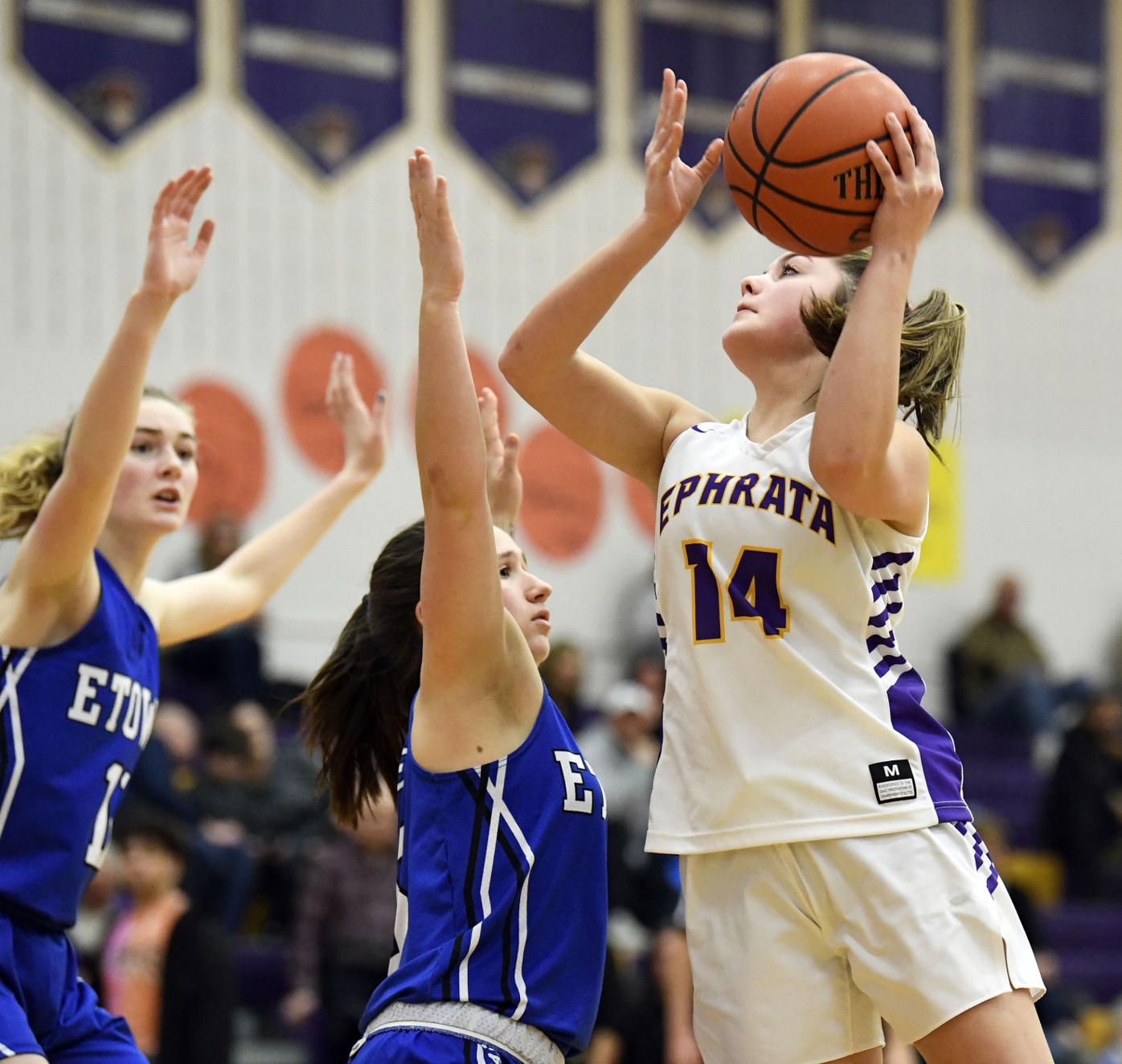 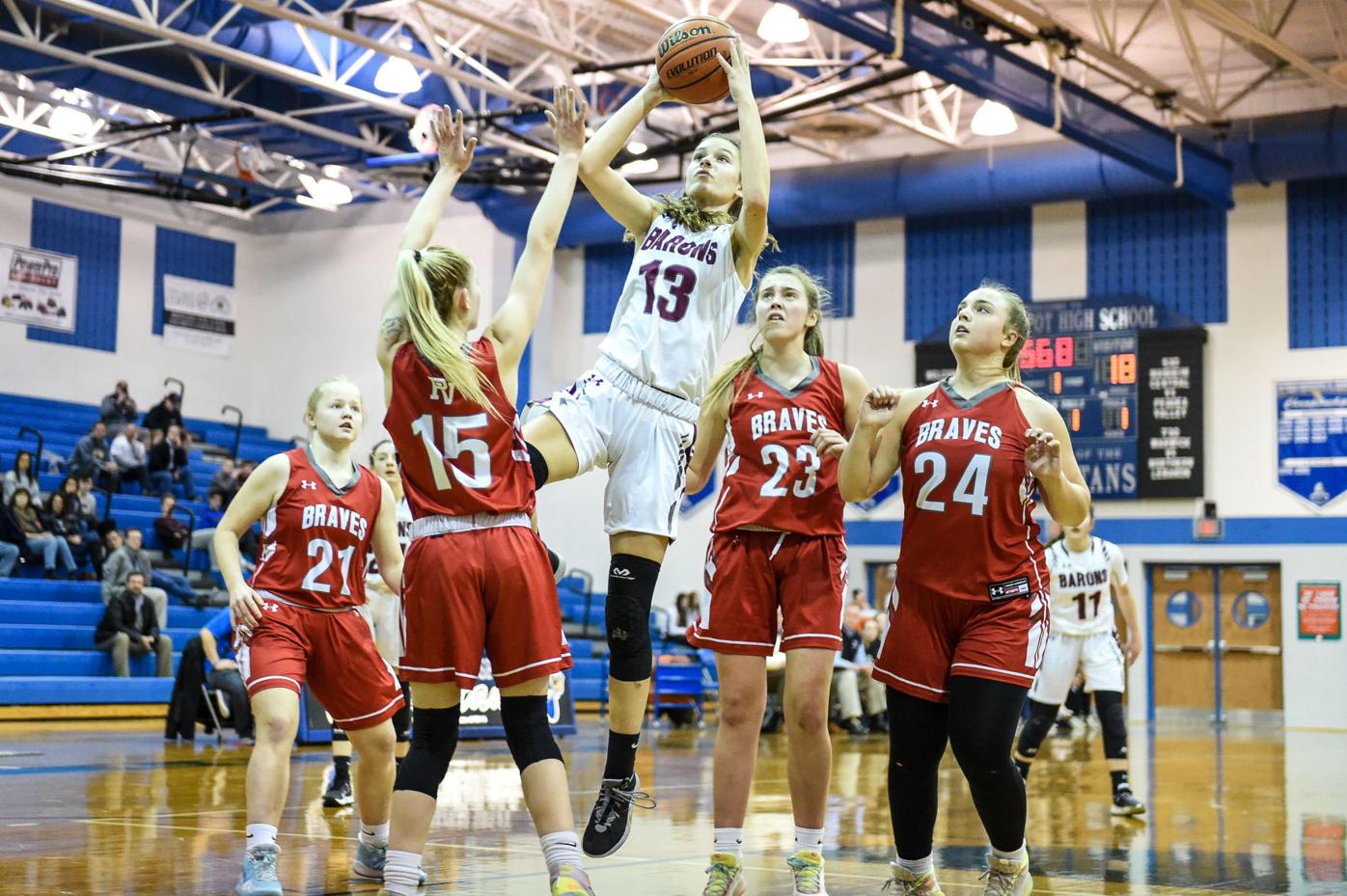 They came up through their respective prep pipelines with plenty of fanfare. And when Ephrata’s Jasmine Griffin and Manheim Central’s Maddie Knier hit the court sprinting in their ninth-grade basketball seasons last winter, they lived up to the hype.

They both had fantastic freshman seasons; Griffin and Knier immediately carved out starting spots for their respective squads, and their coaches — Brian Cerullo at Ephrata and Tyson Hayes at Central — couldn’t pry them off the floor.

Griffin, a smooth lefty, ran the point for the Mountaineers, popping in 11.8 points a game with 15 3-pointers. More importantly, Griffin helped Ephrata go 11-2 in league games, as the Mounts won their first Section Two title since 2016, and went to the league and District Three Class 6A playoffs.

Griffin was a second-team all-star choice for her breakout season.

“There were some games early on where I surprised myself, yes,” Griffin said. “Starting at point guard as a freshman can carry a lot of weight, so I was pretty nervous going into the season. But I thought I was able to play with a lot of confidence.”

Knier, a graceful but powerful player on the wing, the baseline, and in the paint, scored at a 16.8 clip with 22 3-pointers. She helped the Barons to a runner-up finish in the Section Three race and into the league and District Three Class 5A playoffs. Knier — a double-double machine — capped her eye-popping ninth-grade season in style, earning Section Three MVP honors, plus a first-team all-star nod.

Not many ninth-graders around here earn MVP awards, so it was quite the hello-world debut season for Ms. Knier.

“I wanted to contribute immediately,” Knier said, “but I didn’t think I’d make that kind of an impact. I just wanted to blend in and not be a weak link. Confidence was a big thing for me. Once I built up that confidence, I was able to perform even better.”

Here’s one more thing Griffin and Knier brought to the table for their respective squads last winter: The will to win.

In the 2018-19 campaign, Ephrata won nine games and Central picked up four wins for a combined 13 victories between the Mounts and the Barons.

Last winter, Ephrata went 17-7 and Central went 13-11. That’s a combined 30 wins — a plus-17 in the W department — between the Mounts and the Barons with Griffin and Knier helping to steer the ship. And both teams put their playoff dancing sneakers on.

“I thought the coolest aspect about last year,” Knier noted, “was having success, and seeing that transformation in our program from being just kind of OK, to being a team to watch. That brought out so much energy in our team.”

Griffin and Knier, who have become fast friends, have been on the same AAU team the last two years, suiting up for the Lancaster Wave along with several other L-L League sophomore standouts, like Hempfield teammates Autumn Cook and Lauren Moffatt and Cocalico sharpshooter Kiersten Shipton.

The Wave — with Griffin running the point and Knier doing damage — went undefeated this past summer, winning four tournaments along the way.

“We’ve all grown up playing basketball,” Griffin said of the league’s talented sophomore class. “We all play year-round. We’ll play against the guys. We’ll play outside. We all just love basketball.”

Griffin picked up her love of the game from her dad, Kevin, who served as Eastern Mennonite University’s women’s coach for 13 seasons in Harrisonburg, Virginia. His teams won 230 games, and Griffin was a four-time Old Dominion Athletic Conference Coach of the Year.

He recently stepped down to become the connections minister of the Philadelphia District Church of the Nazarene, and the family moved back to the area three years ago. Jasmine was a regular at her dad’s summer camps in Harrisonburg, and she got an early start on her hoops IQ by running the clock at practices, sitting in on film study and traveling with the team on the bus to away games.

“I watched everything,” she said. “I loved it.”

Griffin is a self-described gym rat. Show up early for an Ephrata game — 30 minutes before the JV game even — and she’ll be the first kid out shooting jumpers in an empty, half-lit arena.

“That doesn’t surprise me at all,” Knier said, smiling. “Her work ethic is top notch. She just wants to get better, and I respect that so much. There’s definitely that respect there with us, but we also challenge each other — in a good way. Even if we’re just watching each other play, like in school ball, I always watch what she’s doing because I want to do what she’s doing, only I want to do it better. There’s some competition there, yes. But it’s respect, and we each grow from it, and that’s a great thing.”

“Maddie is one of the most athletic kids I’ve ever played with or against,” she said. “Playing with her in AAU makes my job way easier as a point guard. She can pretty much do everything: She can shoot the 3. She can finish with both hands. She has a pretty nice handle. She’s a great defender. She makes free throws. She’s a good passer. And she scores a ton.”

“We respect each other very highly,” Griffin added. “I’ll watch Maddie play and I’m always learning something. Like how she plays defense and how she can command the ball. And how she rebounds. I’d say she’s one of the best rebounding kids in the league.”

After a four-week layoff, Griffin and Knier will get back to rebounding and shooting jumpers and making crisp passes this week, when L-L League teams can return to the court to restart preseason practice after a government-imposed coronavirus shutdown. Teams can start playing games Jan. 8.

Griffin and Knier can’t wait. And local girls basketball fans can’t wait to see what that dynamic duo does next.

After a one-month hiatus, basketball is back. Hallelujah.

The L-L Basketball Roundtable show returns this week, broadcasted live on the LNP + LancasterOnline Facebook page on Wednesday at 7 p.m. The v…

After an uncertain offseason and a four-week government-mandated shutdown because of the coronavirus pandemic, the high school basketball seas…

At long last, the 2020-21 L-L League girls basketball season got started on Friday night, with eight games on the slate — including some might…

The first weekend of the truncated Lancaster-Lebanon League girls basketball season is tucked neatly away in the record books, as a dozen game…

There were seven games on the L-L League girls basketball docket to get the week kicked off on Monday, including a 4-pack of head-to-head sect…

Seven games on the L-L League girls basketball Friday night slate, including a couple of head-to-head section matchups heading into the weekend.

The 2020-21 girls basketball season has gone from a marathon to a sprint, and the truncated schedule means the Lancaster-Lebanon League sectio…

You can’t stop Maddie Knier. You can only hope to contain her. And Tuesday night, Manheim Central’s scintillating sophomore was uncontainable.

For the first time this winter, all 25 Lancaster-Lebanon League girls basketball teams this week should all be in action at the same time in t…

In a battle of rusty Section 2 teams, Ephrata uses late run to fend off hard-charging Warwick

Warwick was back on the basketball court for the first time since Jan. 13 on Friday night at Ephrata, where the host Mountaineers were in acti…

It was a long day of L-L League girls hoops on Saturday, with nine games on the schedule, with tip times ranging from 11:30 a.m. until 7 p.m. …

With postponements piling up, here's how District 3 basketball chase is coming together

With basketball on pause here early in the week because of the snow, here’s a look at the District 3 power ratings, and who is where with the …

Ah yes, basketball. You remember hoops, don’t you? The recent winter storm played tricks with the schedule, and for the first time since last …

Because of the truncated season, and because the L-L League will not count crossover games toward the league standings this winter, the sectio…

Another week and another peek at the District 3 girls basketball races, as the Feb. 27 deadline date to accumulate power points quickly approaches.

Cocalico holds off Manheim Central, clinches no worse than a tie for L-L League Section 3 crown

Not even sure where to start after Tuesday’s results, as all kinds of heck is breaking loose in L-L League girls basketball circles. The Secti…

In absolute crunch time, with the game on the line and the clock winding down, when Hempfield needed a big bucket Thursday night, the Black Kn…

Just four games on Friday’s L-L League girls basketball slate. But plenty to recap and discuss. And this friendly reminder: The crossover game…

Believe it or not, we’ve reached the final full week of Lancaster-Lebanon League girls basketball action, as this truncated season filled with…

No section championships were clinched Tuesday night in L-L League girls basketball action. But one team locked up no worse than a tie for sec…

Just six games on Friday’s L-L League girls basketball schedule, after a couple of matchups were PPD’d and rescheduled because of the leftover…

Elizabethtown and Ephrata shared the L-L League girls basketball Section 2 championship, and the Bears and the Mountaineers are set to square …

The District 3 deadline — Saturday — is now staring everyone directly in the face. So this is a mega important week for the race for power poi…

The L-L League championship game wasn’t the only tilt on Saturday’s slate, as the regular season hit the tape and the race for District 3 powe…

Breaking down the District 3 girls basketball playoff brackets, with plenty of news, notes, facts, stats, links and predictions, with this fri…

The District 3 playoffs are out of the gates and heading for the first turn, with Tuesday’s first-round Class 6A games now in the books. Three…

Win and advance. Lose and go home. That’s how the District 3 playoffs are shaking down this season, with only the champions in each bracket ea…

Ephrata out, but a busy night of District 3 girls basketball playoff action on tap for Friday

The L-L League took another hit in the District 3 playoffs on Thursday, when Ephrata was KO’d by hot-shooting Governor Mifflin, which buried 1…

And then there were four.

The Lancaster-Lebanon League girls basketball coaches have made their lists, checked them twice and cast their ballots for their 2020-21 all-s…