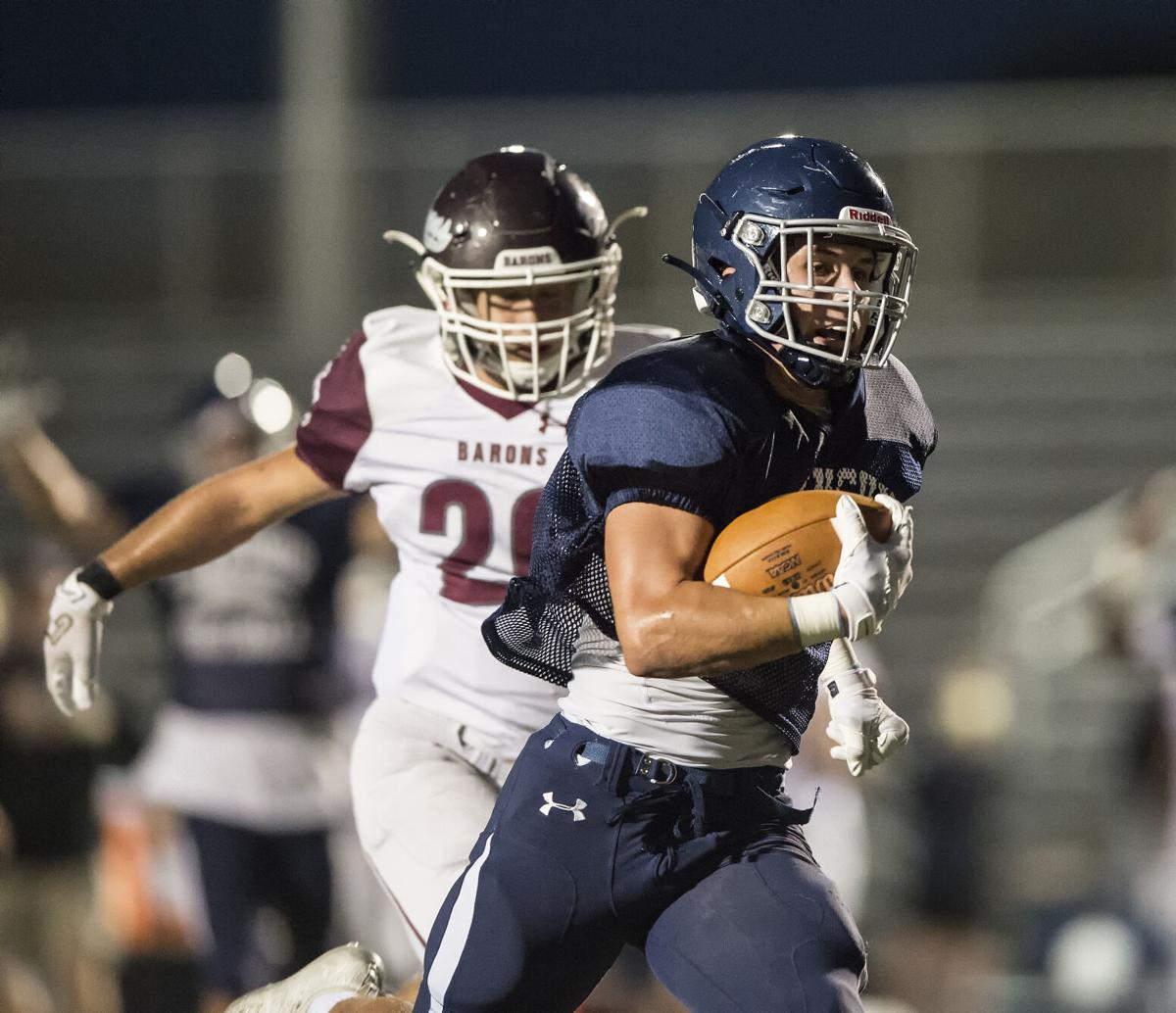 Manheim Twp.'s Cade Clancy, runs in for a touchdown against Manheim Central during a scrimmage at Manheim Twp. High School Friday September 11, 2020. 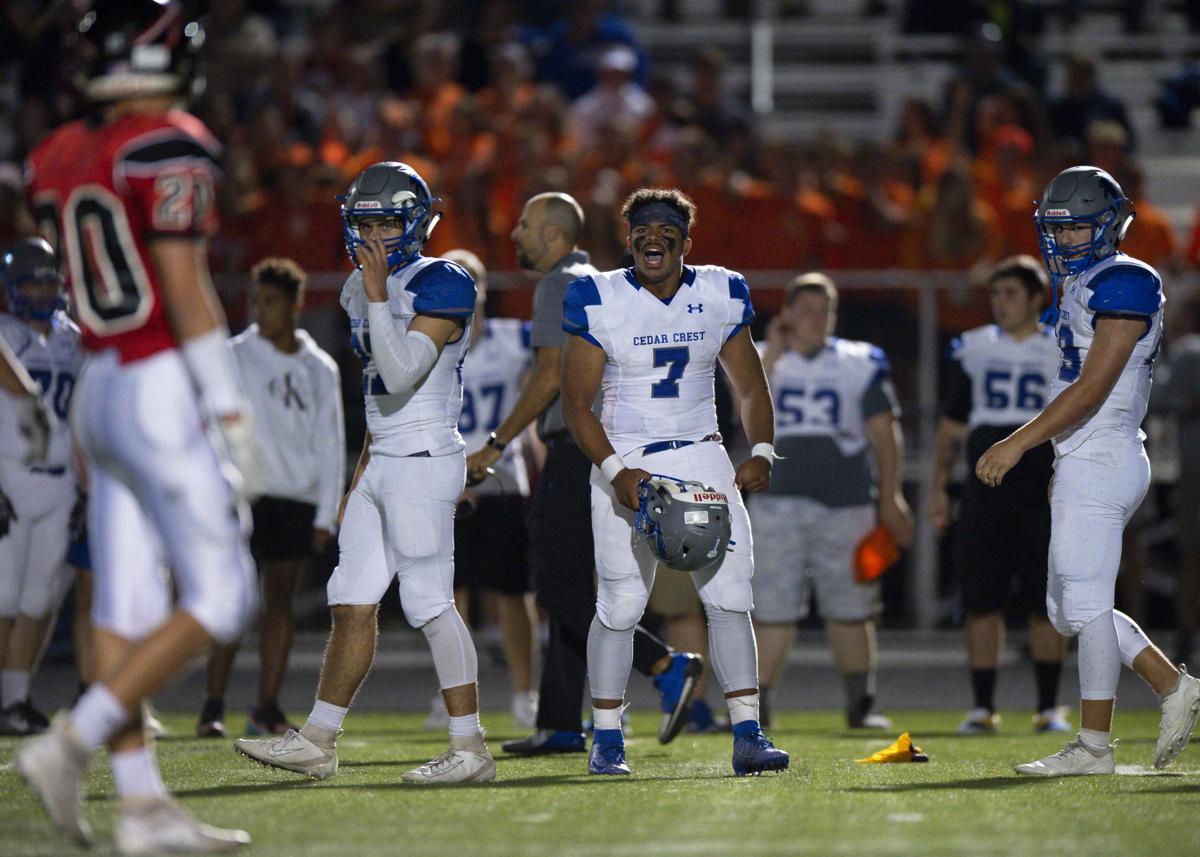 Cedar Crest’s Tyler Cruz reacts after a penalty was called on his team for a personal foul in a L-L League Section One contest at Warwick High School on Friday, Sept. 27, 2019. 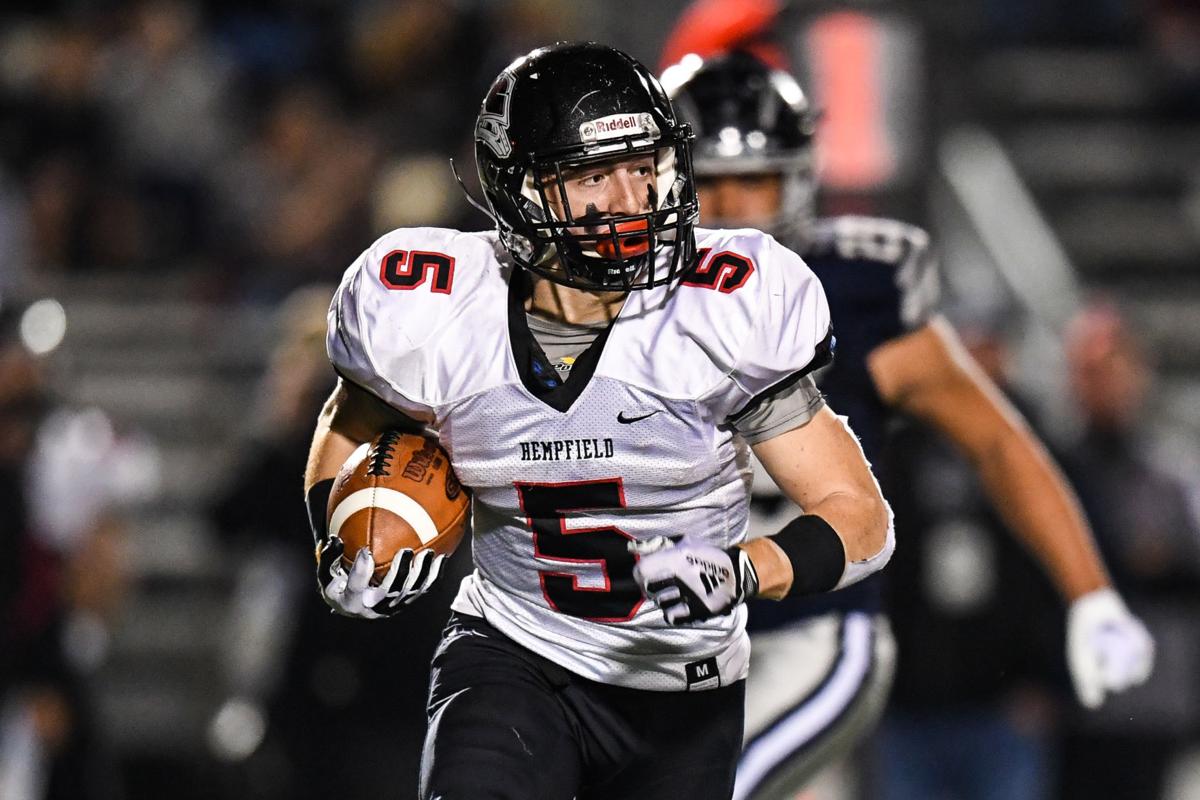 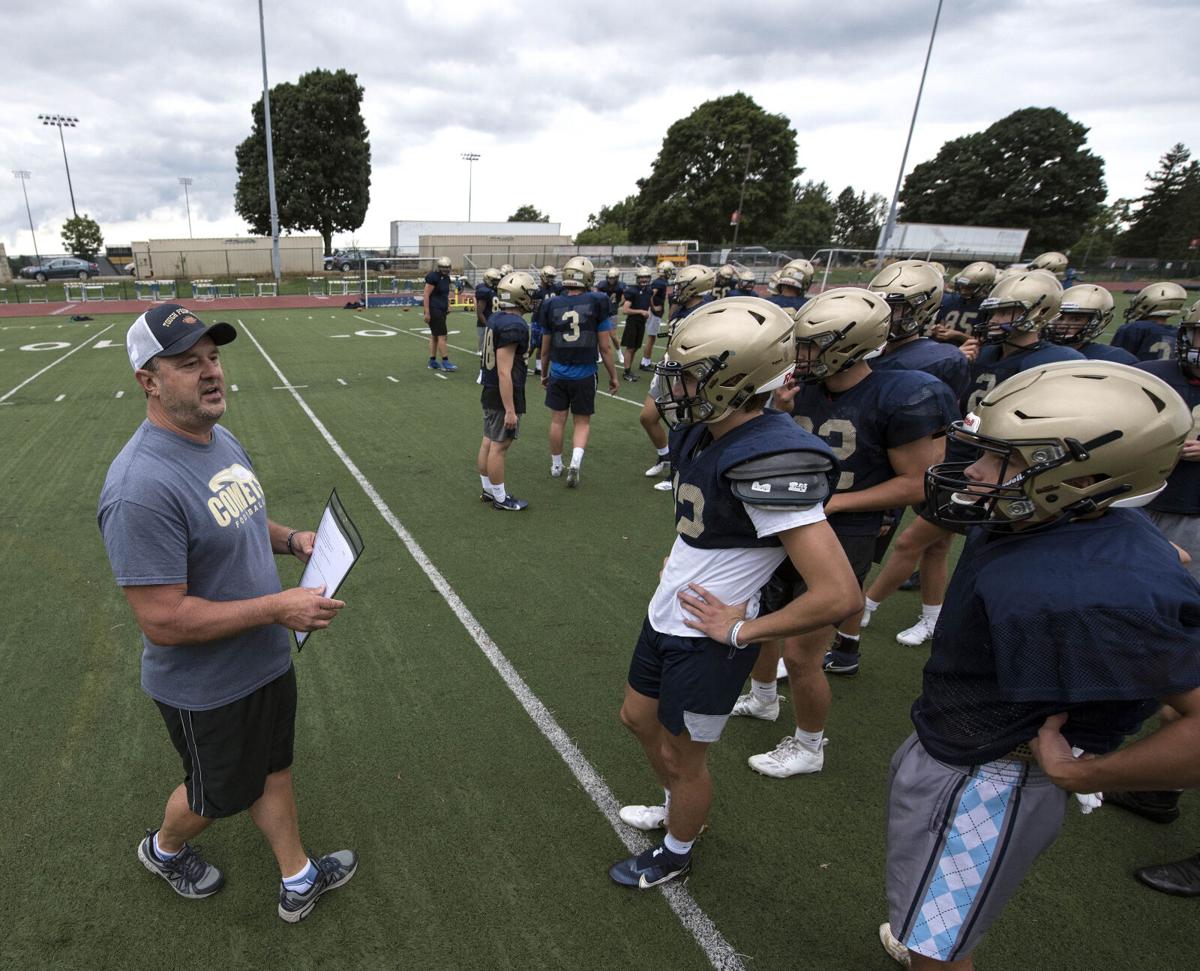 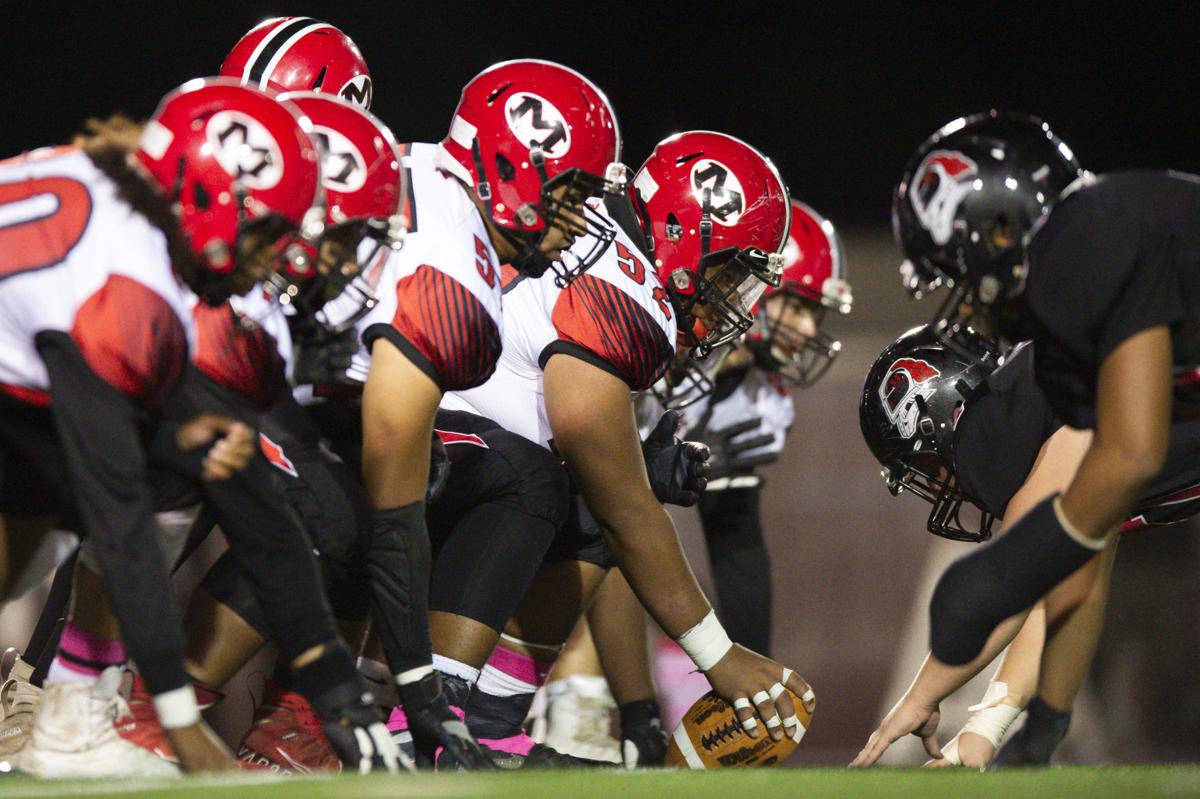 McCaskey’s Thyago Alvarez (52) prepares to snap the ball against Hempfield in an L-L League Section 1 game at Hempfield High School in Landisville on Friday, Oct. 11, 2019. 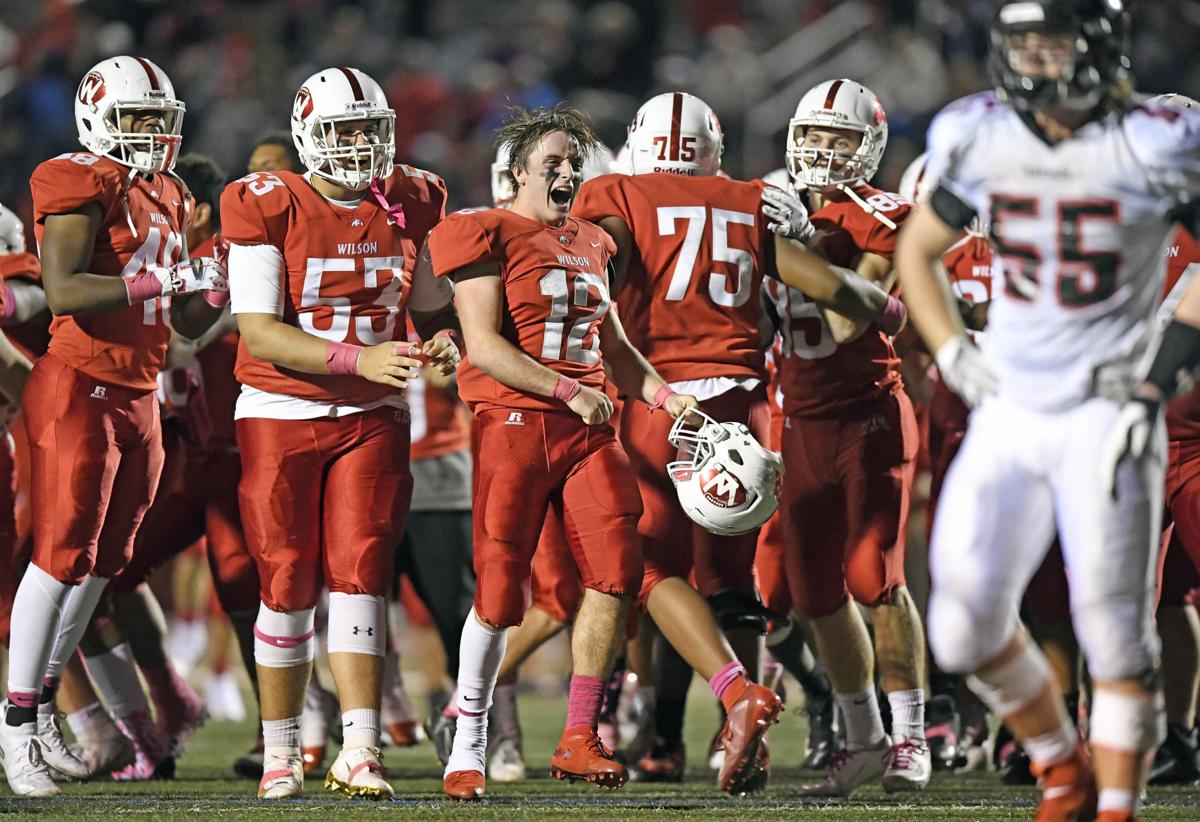 Wilson's Mason Lenart (12) and the rest of the team celebrate after beating Warwick 14-7 in an L-L section one football game at John Gurski Stadium on the campus of Wilson High School Friday October 11, 2019.

After an unusual offseason and a late start to the regular season because of the COVID-19 pandemic, the 2020 Lancaster-Lebanon League football campaign has finally arrived. It will certainly look different, with no fans permitted in the stands and teams practicing coronavirus protocols. Teams will play a truncated seven-game season beginning Friday.

Here is a look at the L-L League Section One teams:

With the lowest enrollment in Section One of the Lancaster-Lebanon League, Cedar Crest is, in the words of coach Rob Wildasin, “a small fish in a big pond.’’

Last season, the Falcons started 5-0 and 6-1, putting themselves in position for big things. Then came the meat of the schedule. Crest ultimately reached seven wins, thus locking up a berth in the District Three Class 6A playoffs, but lost to Warwick, Manheim Township and Wilson down the stretch by a combined 131-21.

In districts, the Falcons lost 36-6 to Central Dauphin, which reached the 6A state final.

Spend any amount of time in proximity to Franklin & Marshall's football coaching staff and one will recognize this as a formation/play call. And so it was familiar to hear it called during a summer gathering of Hempfield’s football team.

Under the guidance of new head coach — and F&M alum — George Eager, the Black Knights will undoubtedly show the occasional Diplomats' element.

“You should see some new stuff coming from us,” said Knights' senior running back Tanner Hess, who rushed for just under 1,000 yards last fall, with 16 touchdowns. “It’s going to shock a lot of teams.”

As soon as the dust settled on Manheim Township's season-ending, double-overtime loss to Central Dauphin in the 2019 District Three Class 6A semifinals, the Blue Streaks have used the initialism WIT as a theme and a rallying cry.

It stands for "whatever it takes."

In 2020, whatever it takes has included wearing masks and social distancing and holding on to hope for an uninterrupted campaign on the gridiron. For Township, whatever it takes also means replacing all but one starter in a lineup depleted by graduation.

McCaskey had limped toward the finish line of a tepid 2019 season. The winless Red Tornado had been outscored 117-0 in the two games prior to its season finale at Wilson, before spotting the Bulldogs a 49-6 lead at the half.

But in the final two quarters of a 0-10 season, and a loss that extended the program's winless streak to 17 games, the Tornado rallied, scoring 20 unanswered points to give first-year coach Sam London something to build on.

"They were proud of their effort," London said. "It can kind of be a glimpse of what's to come. We played a boatload of young kids in that game, and a majority of them are back. It was encouraging to go into the offseason like that."

No weight room? No locker room? No problem?

The ongoing construction at Penn Manor High School — more like destruction at this point — has meant the Comets' 2020 football team has had just one more hurdle to navigate in its quest to improve on last year’s 3-7 campaign.

Running aside and parallel to the Comets' practice field, Millersville’s Model Ave. is currently a parking lot of shipping containers holding all their equipment.

Before each practice the containers are opened, the equipment unloaded and, after practice, in keeping with COVID-19 protocols, the equipment is cleaned and sanitized before being locked up.

It’s been a nerve-wracking, nail-biting time for Wilson’s football team.

Not because the Bulldogs have to replace a bunch of starters or because they’re facing a daunting schedule with all the usual bull’s-eyes that waft around West Lawn. That's nothing new for this crew.

This summer, the Bulldogs had to wait out the PIAA’s much-anticipated decision to let individual school districts allow their athletic programs to participate this fall. That was a big exhale moment.

But then coach Doug Dahms and his bunch survived a school board vote on Aug. 27, when they were given the final thumbs-up to have a season. That was an enormous exhale moment.

What can you expect from an abbreviated Lancaster-Lebanon League high school football season?

The high school football season begins this evening and 23 Lancaster-Lebanon League teams will be in action in 14 games. All of the games are …

After an uneasy offseason, and sweating out a PIAA vote to green-light this season in the midst of a COVID-19 pandemic and state-wide health a…

Twenty-three Lancaster-Lebanon League football teams will kick off their seasons Friday. All but two of the games will be live-streamed online…

The opening week of Lancaster-Lebanon League football is finally here.