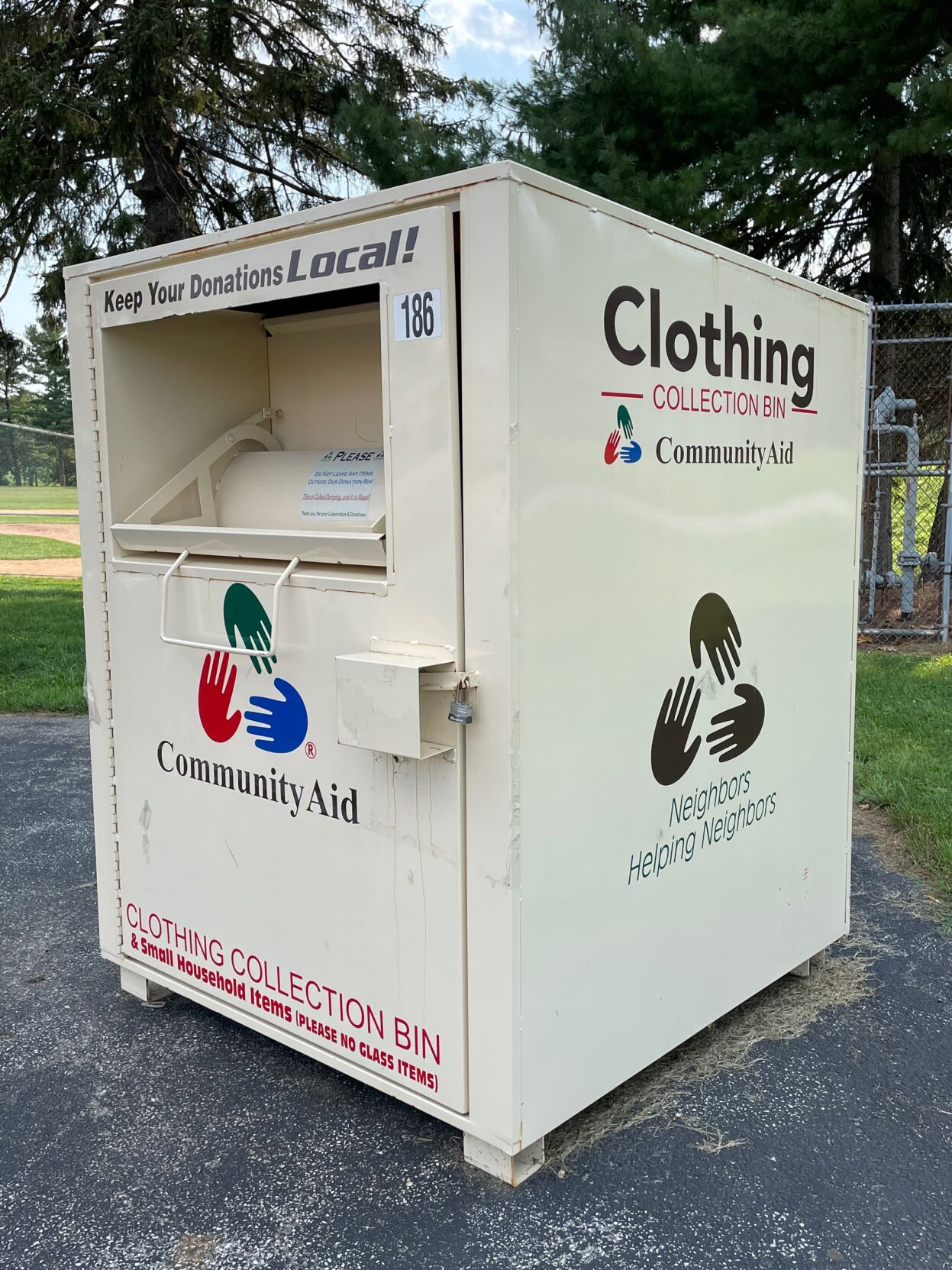 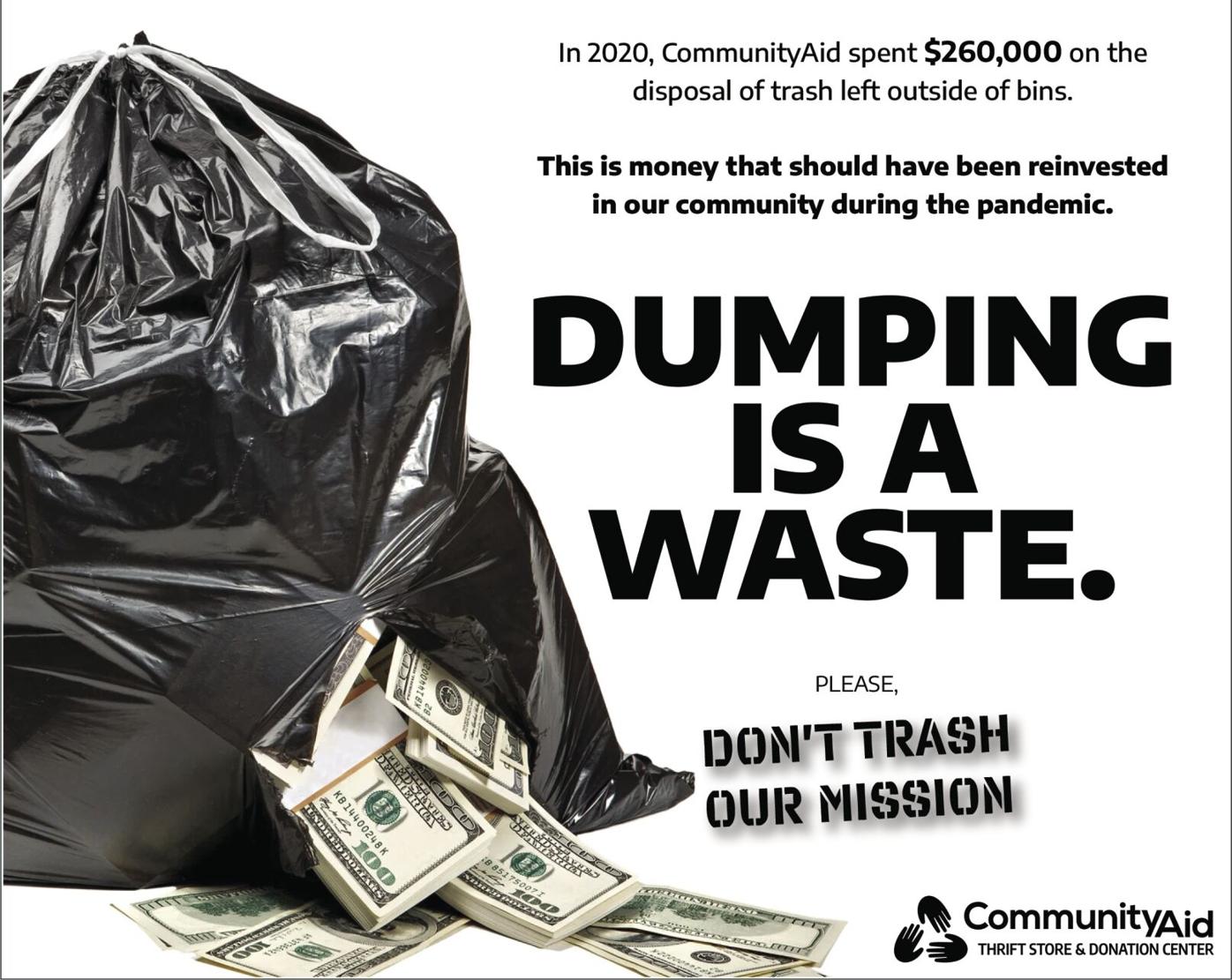 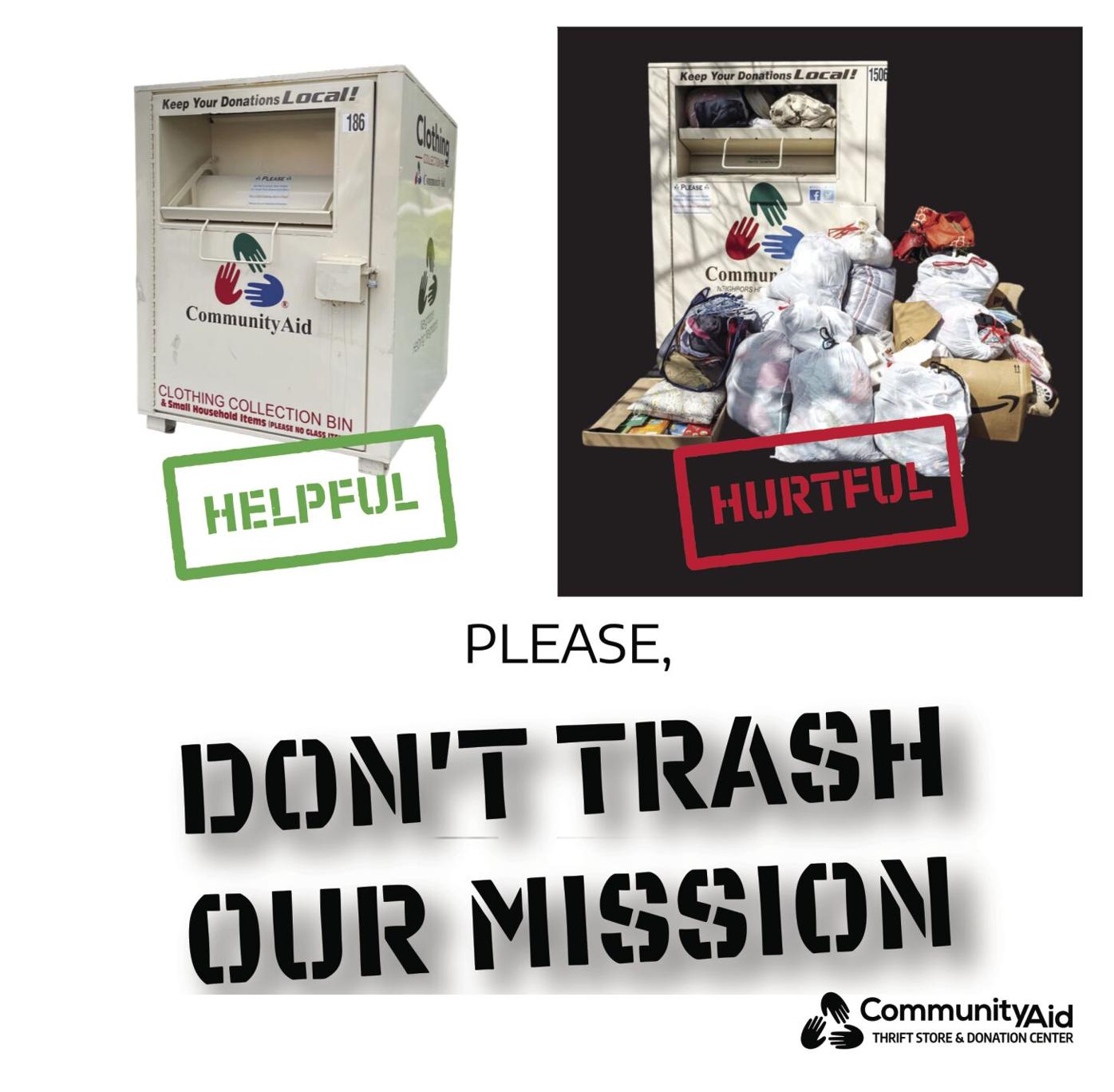 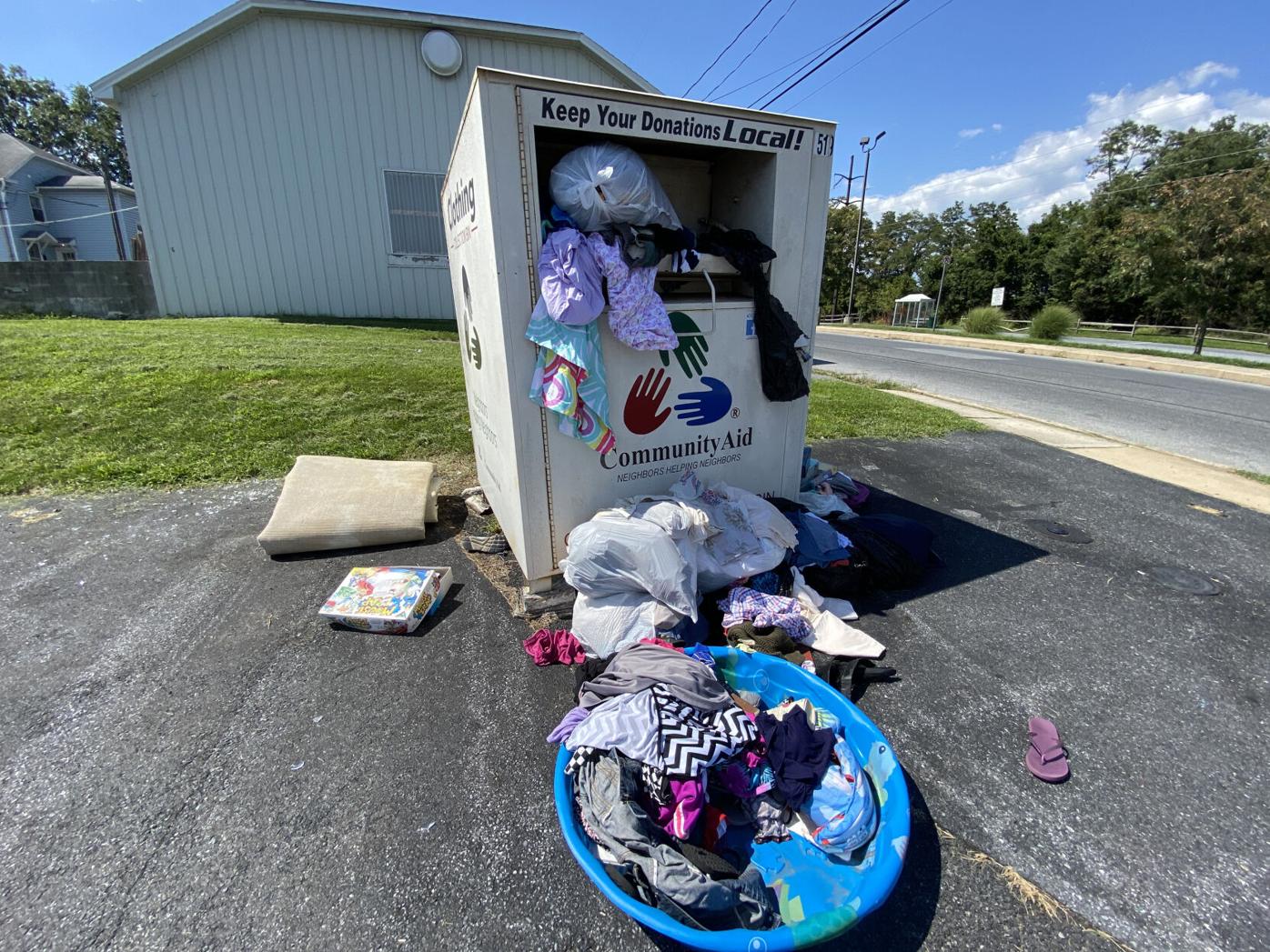 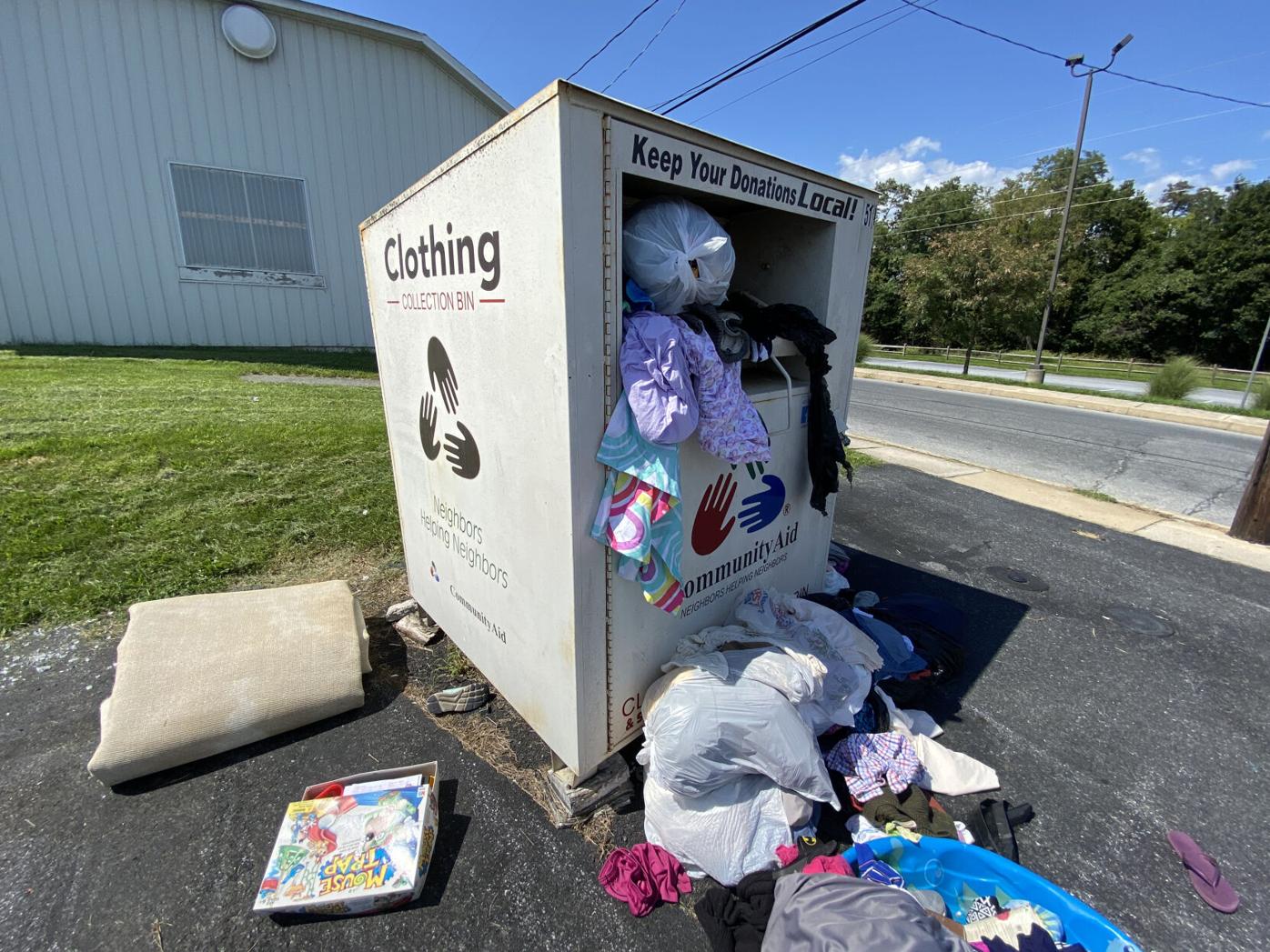 In a twist of irony, the COVID-19 pandemic brought the best of times and the worst of times to CommunityAid, the Mechanicsburg-based nonprofit that operates thrift stores in Lancaster and five other central Pennsylvania locations.

The 2020 lockdown sparked a home-organizing frenzy and an increase in donations to the organization’s familiar tan collection bins, something CommunityAid staff would normally consider a blessing.

However, that staff wasn’t working during the lockdown, and the thrift stores were closed.

So the bins overflowed, and what would have once been considered treasure soon turned into trash.

While the lockdowns are over, the issue of trash at collection bins continues, says Emily Gorski, CommunityAid’s director of marketing and community impact. And it’s affecting the nonprofit and the partners it serves in myriad ways.

So much so that CommunityAid has launched a “Don’t Trash Our Mission” initiative to educate the public on how to donate – and how not to donate – to their cause.

“It’s become a really out-of-control problem,” says Gorski, noting they’ve reduced the number of collection bins by over half, from more than 700 at the start of 2020 to 350 today. “We had to remove a lot of bins in the past year and a half because of this issue specifically.”

CommunityAid has bins in both urban and rural locations throughout the region. The trash problem is the same, regardless of the location, Gorski says.

The trash takes several forms. Sometimes it’s literal trash, like a kitchen trash bag full of garbage or, in one case, cat litter and feces dumped directly into a collection bin, essentially ruining all the good donations. Other times, it’s old mattresses and furniture, which CommunityAid does not accept.

More often, however, the “trash” is useful donations placed next to a bin that is already full.

“Leaving anything outside of a bin is considered illegal dumping and is a crime,” Gorski says. “Regardless of the legal ramifications, if you put anything outside of the bin because it’s full, for any reason, that’s unusable product. When something is left to the elements and exposed, we can’t sell it.”

“Even if it’s all in a trash bag and tied tightly, if it’s getting rained on those clothes are very likely to get wet and grow mold,” Gorski says.

Items left outside can also attract insects and other pests, making a big issue even bigger.

CommunityAid helps support more than 500 nonprofits in the central Pennsylvania communities where it has thrift stores. Each bin is assigned to a nonprofit partner that gets 4 cents per pound from the clothing collected in their bin. When donations are dumped next to a bin, or when the donations in a bin are ruined, that means less product to sell in the thrift stores and less money going to the nonprofits to serve their communities, Gorski says.

But the cost of misused collection bins goes far beyond lost income from clothing donations.

“In 2020, we spent $260,000 on trash removal – disposing of those bags left outside of our bins,” Gorski says, noting they have dealt with 364,650 pounds of trash left outside of bins so far this year. “That’s $260K directly being taken away from the 500-plus nonprofits we support. Our whole mission is to be here for our partners. … That amount of money, that is really damaging to us as an organization and to the partners we are trying to support so they can help our neighbors.”

While the simple solution might be more frequent collections to keep the bins from overflowing, that is easier said than done, Gorski notes.

CommunityAid is currently working with routing software to create a more regular collection schedule, and they’re adding new signage to the bins, Gorski says. They’ve also made their nonprofit partners responsible for removing any trash outside their assigned bins.

Now they are hoping members of the community will do their part, too.

Gorski urges those who encounter a full collection bin to hold on to their donations, rather than place them outside the bin. They can also take them directly to the donation center at CommuntyAid’s Lancaster store, 31 Rohrerstown Road, or any of their five other thrift stores in Mechanicsburg, Hanover, York, Harrisburg and Selinsgrove. The Lancaster donation center is open 9 a.m. to 6 p.m. Monday through Saturday.

Their new motto says it in a nutshell: “If there’s room in the bin, put it in. If it can’t fit anymore, take it to the store.”

Success! An email has been sent to with a link to confirm list signup.

What apples are in season in Lancaster County?