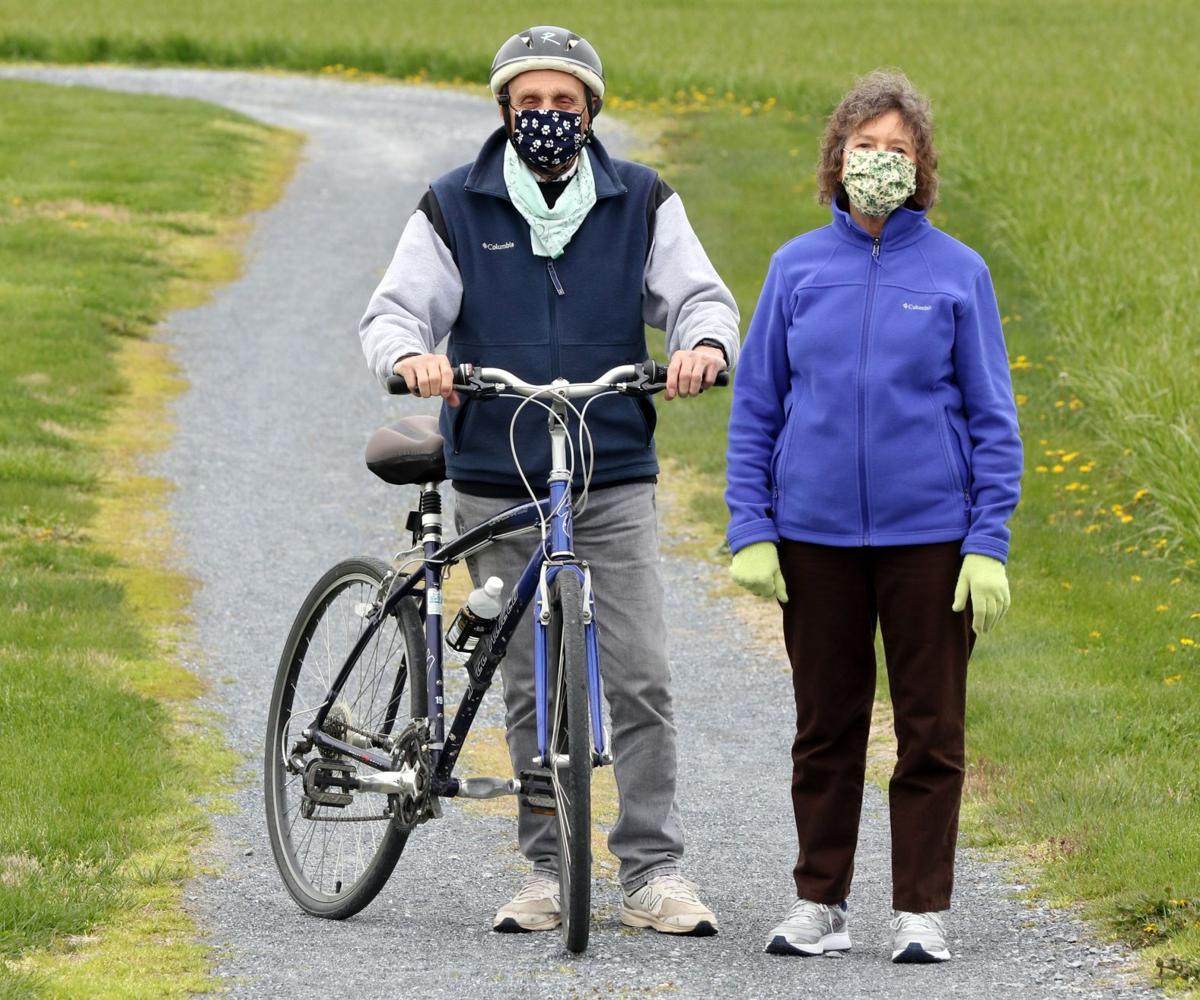 Dave and Sue Martin get out for a little exercise near their home in Lititz. 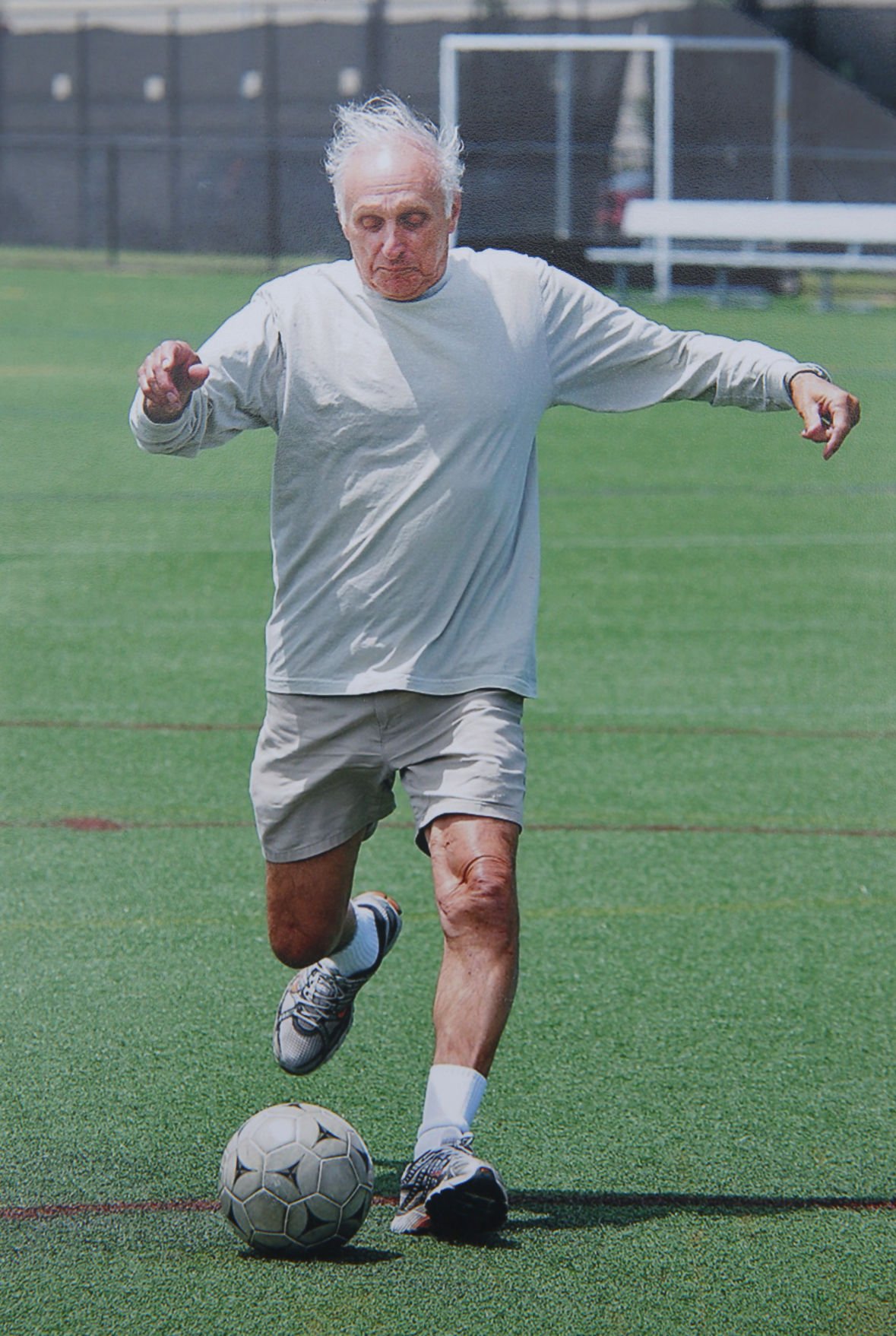 Normally this time of year, Dave Martin and his rag-tag group of pickleball friends would be making the transition from indoor play at the Lampeter-Strasburg YMCA to outdoor play at Buchmiller Park. In between, he’d be taking half-day bike rides on the rail trail between Ephrata and Lititz or Columbia and Bainbridge.

And he’d be wrapping up a week of fun, volunteering and competing at the Lancaster Senior Games.

But these are not normal times. Social distancing makes pickleball impossible. Bike rides are confined to the campus of Landis Homes Retirement Community, where Dave, 83, lives with his wife, Sue, 79.

And the Senior Games, a mainstay in Lancaster County for over 30 years, were canceled this year, yet another casualty of the COVID-19 pandemic.

For Lancaster County senior athletes, the coronavirus is more than a health scare. For many, it’s challenged their normal routine for keeping fit — and socially connected.

“It’s as much of a social activity as it is a physical activity,” Dave says of pickleball, which he normally plays two or three times a week. Off the pickleball courts, the players often get together with their spouses, he says.

Sue’s preferred form of exercise is swimming at the Landis Homes pool, which is now closed. But she’s also missing the friends she’s made over about 20 years of volunteering for the all-day weight-lifting and home run derby events at the Senior Games. “You really get to know people,” she says.

“This year we were expecting over 1,000 (participants),” says Pat Fellenbaum, who started the games 32 years ago as a joint effort of the Lancaster Recreation Commission and the Lancaster County Office of Aging. “They see friends who they may not have seen all year long, but they see them at the Senior Games. We used to laugh because they used to say, ‘Can’t we have these in the winter, too?’ They never realized how much it takes to prepare.”

Thanks to the new coronavirus, Senior Games regulars like the Martins are missing out on more than simply a beloved annual event. Their once active lifestyle has somewhat ground to a halt. They haven’t left the Landis Homes campus in weeks.

“We haven’t killed one another yet,” Dave quips.

When seniors can’t participate in the activities that bring them joy, energy and purpose, they can end up feeling isolated, sad, depressed and anxious, says Stacy Schroder, director of wellness and prevention at Masonic Village in Elizabethtown.

“Compound that with the lack of physical movement/exercise and mental stagnation,” she writes in an email, “and one could spiral down pretty quickly.

“If even one aspect of our well-being is not being nurtured, we become out of balance, which has a significant impact on how we think, feel and function day to day,” Schroder says.

That’s been the case for Woodcrest Villa residents Jack and Sandy Neal, who have taken part in the Senior Games for about 15 years, a rough estimate based on a quick count of the participant T-shirts they’ve accumulated over the years.

The Neals jokingly give each other credit for their bronze-medal cornhole performance in the 2019 games. “It was a riot,” Sandy says, laughing

“Yes, it’s competition, but it’s fun competition. Everyone has a good time,” Jack says. “You get to meet people and see them once a year. It really is a social event as well, and they make it that way.”

Risk of falls increases as you age, but they are preventable

Sandy, 78, has done more volunteering than competing in the games. However, Jack, 71, is a multisport Senior Games athlete, competing in shuffleboard, bocce, pickleball, tennis, badminton, foul shooting, miniature golf and pinochle. Many of those events are part of his regular exercise routine, at least for part of the year.

“I play tennis more often in the summer, but through the winter once a week,” he says. He also plays pickleball at Woodcrest Villa, shuffleboard once a week and bocce all summer long with the Lancaster County Bocce League.

“I must say I can feel the effect of not being as active as I am during the normal time doing all these activities,” he says. “I look forward to them, and now that I can’t do them there’s something missing. I don’t feel as physically active.”

The COVID-19 pandemic has been a challenge for those in charge of senior wellness, too.

“Because of this pandemic, we all have been forced to think creatively on how to nurture all of our needs in all dimensions of our well-being,” Schroder says.

Like many retirement communities in Lancaster County, Woodcrest Villa has had to adjust to a new normal when it comes to fitness and overall well-being, wellness director Kristin Manser writes in an email. She’s made a number of YouTube exercise videos exclusively for residents, focusing on balance, strength and cardiovascular exercise. Additionally, the wellness center has been live streaming daily fitness classes that residents can access in their own homes via the community’s in-house channel.

Masonic Village also has been posting exercise videos on its internal channel, offering hydration and 10,000-step challenges, and using a new health app created specifically for the community to help residents set and accomplish their own wellness goals.

As an alternative, both communities also have created outdoor scavenger hunts to encourage residents to keep moving.

“In many households, now both spouses are participating in the classes at home, where before many times only one spouse would be actively attending classes,” Manser says. “Because the classes are broadcast right to participants in their living room, the attendance numbers I’m tracking are higher than when we had our traditional classes in our fitness studio!”

Under normal circumstances, Sandy Neal says she’s not as physically active as her husband. Her main form of exercise is water aerobics, but with the pool closed she’s taken to participating in the live-streamed classes. She recently tried yoga for the first time.

“One of the things we try to do is we have a routine, and that helps,” Dave Martin says. That includes getting up at 6 every morning and taking turns with Sue riding the stationary bike. By early afternoon, he’s heading by bike or on foot to another favorite outlet, the couple’s 20-by-40-foot plot in the Landis Homes community garden.

For those who don’t have the resources of a retirement community, Manser recommends searching for YouTube exercise videos specifically geared toward seniors.

Although it might be easier to watch TV or read a book, there are plenty of online resources available for those who want to get moving, says 15-year Senior Games participant Lin Rengier of Willow Street.

“I’m really lucky,” she says. “I like to exercise, so I exercise all the time.”

At the Senior Games, Rengier competes in all the swimming and throwing events, as well as billiards and the longest drive in golf.

“I swim at the Lampeter Y and I play billiards with a friend when we can’t play golf, so we kind of practice that all winter long,” Rengier says, adding that she also takes a regular spin class and movement class, and plays in a 9-hole women’s golf league.

“The worst thing about (the pandemic) is the isolation,” she says. “The Senior Games are so much fun. … You get to know a lot of the people, especially the people in your age group. Although you’re competing, it’s just fun and supportive.”

Despite her disappointment, Rengier hasn’t allowed a global pandemic to slow her down. With many of her normal activities curtailed, she has had no trouble finding other ways to stay fit. She walks her dog in the neighborhood, and does stretching, yoga and weight-bearing exercises. She’s even been practicing her golf swing in the backyard and plans to ride her bike as the weather improves.

“One of my main tenets in life is: keep moving,” she says.

Jack Neal likes to quote some recent advice from a doctor: “If you rest, you rust.”

Fellenbaum, 72, is normally too busy organizing the Senior Games to compete in them, but she does have a regular fitness routine that includes Pilates and weight-bearing exercise classes three times a week, along with some pickleball — all on hold due to the pandemic.

These days, she’s been doing a lot of house cleaning — “My house has never been so clean!” — and trying to get 10,000 steps a day, including a regular walk with her husband.

“We have found so many trails in Lancaster County,” Fellenbaum says. “We scout around.”

When it comes right down to it, the only equipment you really need to stay fit is your own two feet, Manser says.

“Walking is one of the easiest and best forms of exercise for seniors because it strengthens the bones, helps control weight, and can lower blood pressure and the risk of cardiovascular disease,” Manser says “Additionally, aerobic exercise such as walking releases those ‘feel good’ endorphins, which help to ward off depression and boost mood during this challenging time.”

Retirement living in Lancaster County: An A to Z guide to important terms

Considering a continuing care retirement community? Here's what you should know

TRAIN FOR YOUR SPORT

A challenge for some senior athletes right now is not necessarily staying active, but staying in shape for the sports they normally like to play.

“It does not take long for muscle to atrophy, so it is important to work those muscles as often as you had been playing the sport with the same frequency, duration and intensity,” says Stacy Schroder, director of wellness and prevention for Masonic Village. “The important thing for anyone who plays a sport who cannot right now is to keep those muscle groups strong and flexible.”

If, for example, you play pickleball or swim, you should exercise in those planes of movement using resistance bands or light weights, or even jugs of water, she says.

• Tape a square on the floor and practice foot work in and out of the box, quick feet and moving side to side, forward and back.

• Holding the racket, practice hitting a cottonball with your serve, backhand and forehand. (You can weight the racket to improve some strength.)

• If you have a solid wall, practice hitting the ball against the wall.

• Play catch with your spouse and have them throw the ball just out of reach so you have to move to get it.

• Make sure you work on hamstring, quad and shoulder flexibility and strength.

“God gave us humor because He knew we were going to need it,” says artist and author Bruce Garrabrandt.

Zach Park shot a buck, a bear and a turkey this past season.