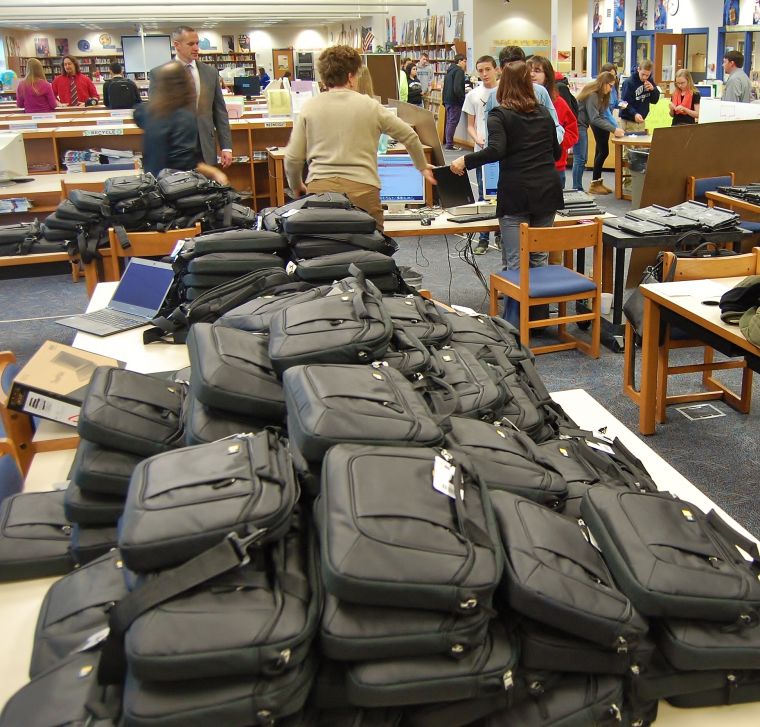 Laptops and carrying cases await distribution Jan. 30 to Penn Manor High School students. More than 1,700 computers were handed out under the 1:1 Student Laptop Program, the largest of its kind in Lancaster County. 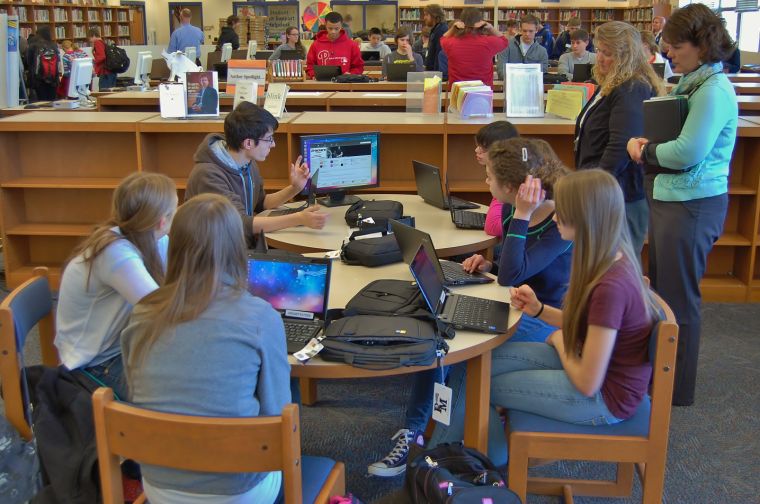 Using a monitor, Nick Joniec, a student technology apprentice, instructs students and staff on how to use the new laptops Jan. 30 in the Penn Manor High School library. 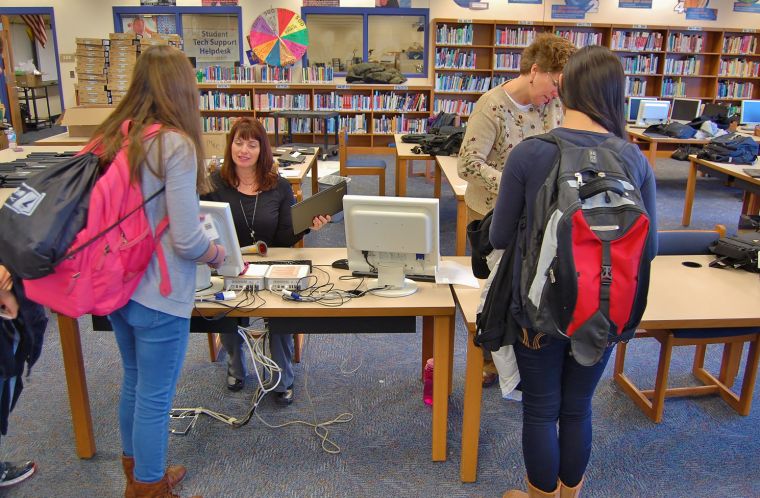 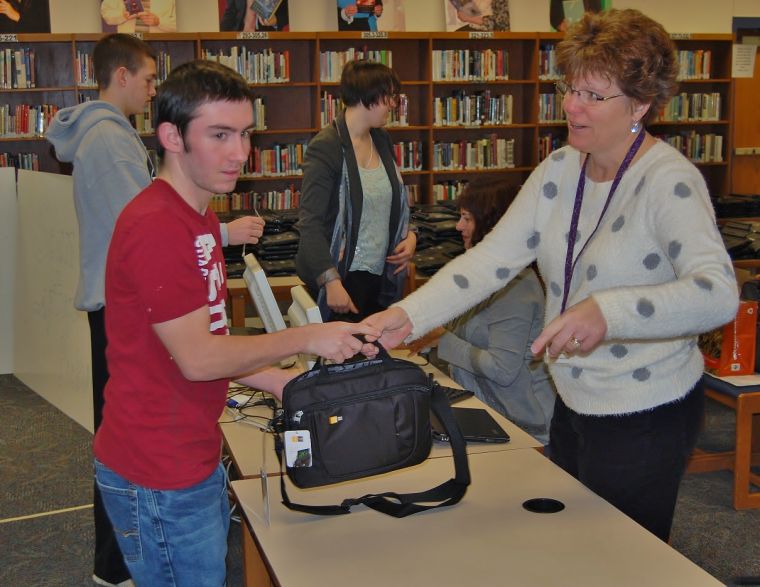 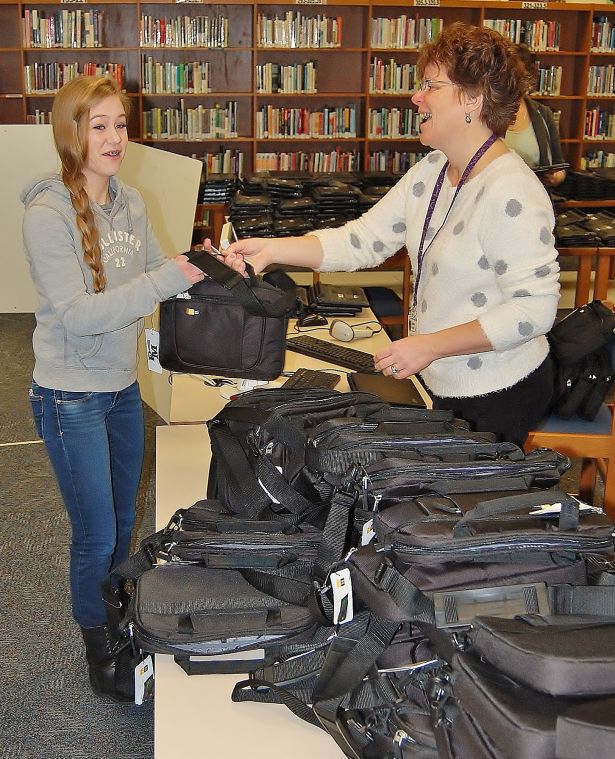 Laptops and carrying cases await distribution Jan. 30 to Penn Manor High School students. More than 1,700 computers were handed out under the 1:1 Student Laptop Program, the largest of its kind in Lancaster County.

Using a monitor, Nick Joniec, a student technology apprentice, instructs students and staff on how to use the new laptops Jan. 30 in the Penn Manor High School library.

Penn Manor High School recently distributed more than 1,700 laptop computers to its students for use in the classroom in the largest 1:1 student laptop program of any school district in Lancaster County.

Every student in grades nine through 12 received a custom-designed Acer computer, carrying case, charger and mouse. About 1,725 laptops were distributed at a total cost of $586,105. The program provides students with a learning tool for use in all subjects every day.

"It gives everyone equal access to the Internet and a full and powerful computing device, instead of just a smartphone or tablet," said Charlie Reisinger, Penn Manor technology director. "These laptops are the Swiss Army Knives of education computing."

In contrast to other 1:1 programs, Penn Manor's laptops are loaded with free, open-source Linux software, saving the district about $200 per device in annual licensing fees, or about $345,000 this year, Reisinger said. The program is believed to be the only open-source 1:1 student laptop program in Pennsylvania, he said.

The computers cost the district $313 apiece, a fraction of what was spent just a few years ago for laptops under a state-funded grant program called Classrooms for the Future. Penn Manor paid $457,500 in state funds for 401 laptops, or more than $1,000 per computer, in 2007-08 and 2008-09. The Classrooms for the Future program has since been eliminated.

Penn Manor's 1:1 program is being implemented without the need to hire additional technical staff, in part, because of the high level of student involvement in the effort.

Working closely with district information technology staff members, a team of student technology apprentices designed a unique software imaging system, inventory program and other software applications for the computers. They also set up the devices, helped train students on using them and will staff a "help desk" to diagnose technical problems.

"Our passionate student technology apprentices are key to the program's success," Reisinger said. "The complexity of the work and technical skills of the student team are unlike anything else in our region."

In support of the 1:1 program, all Penn Manor High School teachers have completed a minimum of 12 hours of professional development on utilizing the laptops in their classrooms.

"I'm very excited for 1:1 to come to Penn Manor," said English teacher Lisa Mayo, who plans to use the laptops for online writing forums and blogs and to collaborate with a class of students outside the school district.

"This will bring communicating online live and in real time," she said. "Students who don't always feel comfortable speaking in class will often be willing to share online."

"No more hoping I can get a laptop cart on Tuesdays. Everyone will be able to access our writing resources, and it will open up sharing with each other. There are so many possibilities on every level."

Students are permitted to take the computers home and will be responsible for the cost of repairs for any damage that may occur. Each device is equipped with an Internet filter that blocks images and other material harmful to minors, both on and off campus.

Reisinger pointed out that this is just the first step in the 1:1 program.

"While a project of this scope requires considerable planning, engineering and teamwork, the distribution is only the beginning," he said. "Overnight, we have transformed our classrooms into high-tech, student-centered, information-rich learning spaces. We are looking forward to the beginning of a new learning adventure."