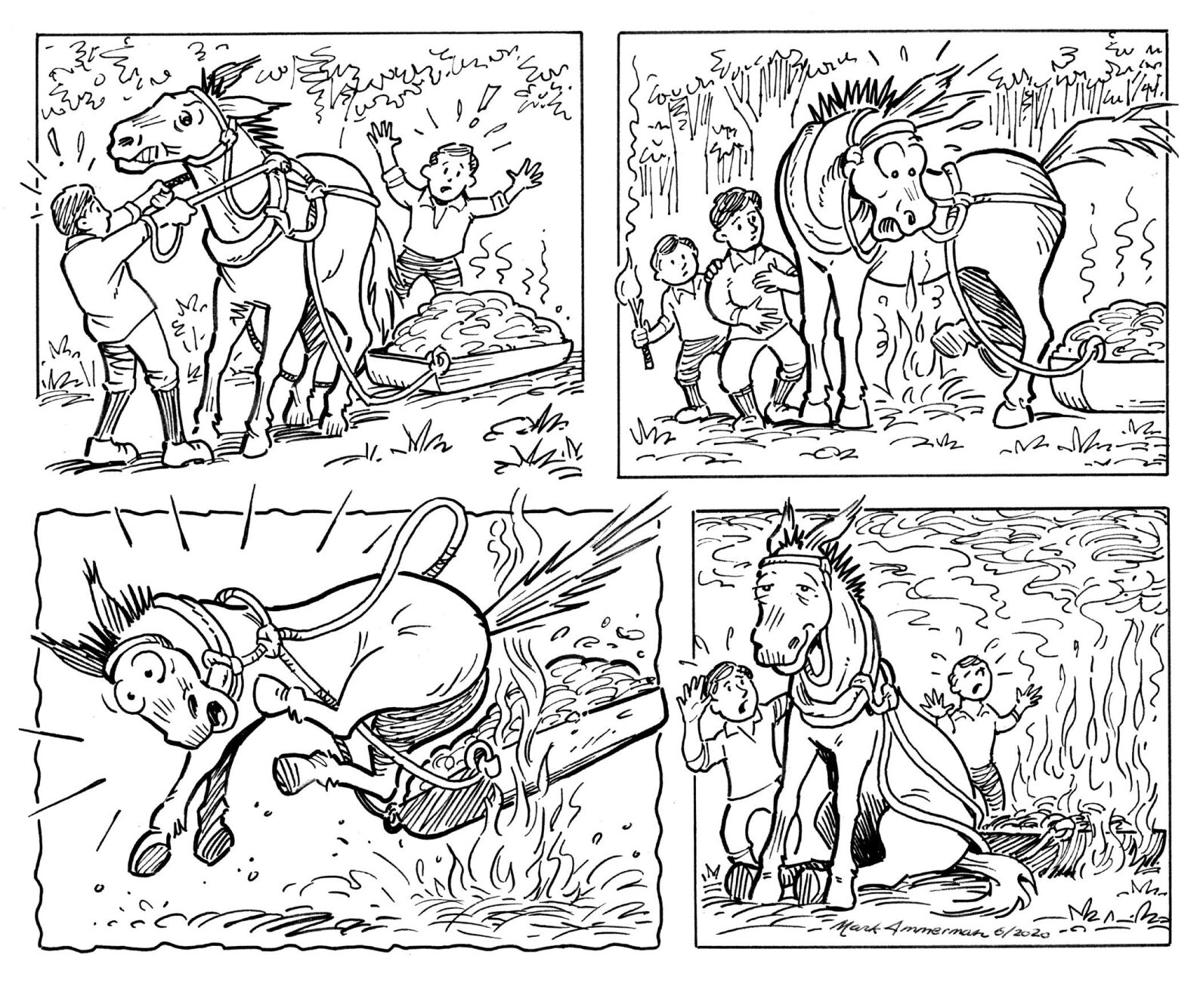 Cartoon shows what happens when a mule moves a few feet.

Cartoon shows what happens when a mule moves a few feet.

The S. Clyde Weaver company has prepared and sold meat, cheese and other edibles for 100 years, so the family decided to produce a commemorative book. Daniel Weaver Neff, grandson of the founders, wrote the text.

The best story in the heavily illustrated 200-page book is about Neff’s grandfather and business namesake: S. Clyde Weaver. This story has nothing to do with the business, but it’s very funny.

In his childhood, Clyde Weaver and his brother, Norman, worked on a farm in Lebanon County. One day they urged a mule to pull a sled of manure from a barn to a field. The mule had other ideas, as mules often do, and would not move.

So the Weaver boys, being boys, decided to build a fire beneath the mule to encourage its progress. The mule did move, but only far enough to escape the flames and drag the sled of manure onto the fire. Burning manure no doubt gained the neighborhood’s attention.

The book, published by Masthof Press, is called “The Weaver Cleaver” for the original broad-bladed cleaver Clyde Weaver used to chop meat at the old Northern Market at North Queen and Market streets in Lancaster.

After describing how a mom-and-pop operation developed into a family-operated business located at Lancaster’s Central Market, the East Petersburg store and at eight other markets and stores, the book concludes with an appropriate sentiment.

“While the masks we wear in this COVID-19 era prevent you from seeing our smiles and us from seeing your smiles,” Dan Neff writes, “we trust there will be a better day.'”

Vampire and a hero

Melinda Newmin, of Lancaster, writes a blog about the adventures of a Baltimore vampire named Niles Gule. In a blog last fall, Gule rescued a fellow kayaker following a collision with a dam and a tube rider on the Conestoga River. (Google “Vampire of Baltimore: Niles Gule'” and scroll down to the Sept. 8 entry, “Gule Gets His Feet Wet'”)

The blog reminded John Matthews, a friend of Newmin who lives in Millersville, about an actual rescue on the Conestoga.

On May 15, 1989, two teenage girls fell out of an inflatable raft while riding over the Rock Hill Dam in Conestoga Township. James Kilby, 42, of Conestoga, was fishing when he heard the girls scream for help.

Police said Kilby disappeared and drowned in 14 to 18 feet of water as he tried to reach the girls, who safely reached shore.

“A small act of forgotten heroism that deserves to be remembered,” comments Matthews, noting that a memorial bronze plaque marks the site. The dam itself was dismantled in 1997 as part of a shad restoration project that has failed to return the fish to the Susquehanna and its tributaries.

Vincent DiGirolamo, author of “Crying the News: A History of America's Newsboys,” responds in an email that the essay, which was adapted from his book, refers only to the first “hawkers” of newspapers — that is, boys hired to sell papers at a penny apiece. That business began in the 1830s.

DiGirolamo says his book dates America’s first newsboy, who carried newspapers only to subscribers, to at least as early as 1705.

In this season when most people wish each other “peace on earth, good will to men” — even th…

Back in the early 1990s, the essayist and nature writer Scott Russell Sanders, then a litera…

Don’t be glum: Mood rings are making a comeback [The Scribbler]

The mood ring is back! Well, almost back. It’s on the way back.