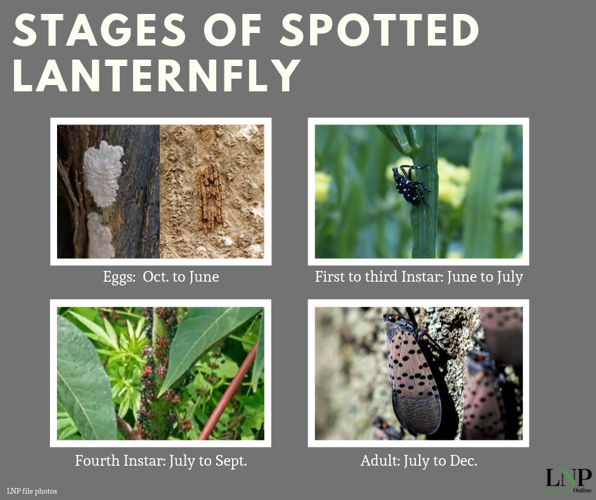 The stages of spotted lanternfly growth. 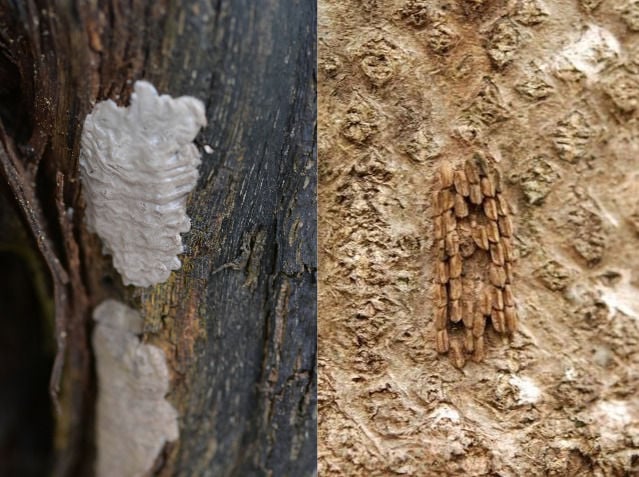 Fresh egg masses laid by a spotted lanternfly, at left, and an older egg mass, closer to hatching, in images provided by the Lancaster County office of the Penn State Extension.

The stages of spotted lanternfly growth.

Fresh egg masses laid by a spotted lanternfly, at left, and an older egg mass, closer to hatching, in images provided by the Lancaster County office of the Penn State Extension.

The spotted lanternfly is an invasive species that has emerged as a destructive pest in Pennsylvania since its arrival in the southeastern part of the state about five years ago. The insect, described as “a large, colorful planthopper,” is a threat to $18 billion in state agriculture — tree fruit, timber, hops and especially grapes. The lanternfly wreaks havoc by sucking “the sap from valuable trees and vines, weakening them,” The Associated Press reported in a Sept. 26 article that appeared on LancasterOnline.

Everyone reading this is granted a full license to kill the spotted lanternfly. You’re our best hope.

The AP’s Michael Rubinkam, in darkly comic fashion, described the ongoing battle in his Sept. 26 article: “In the Great Spotted Lanternfly War, Pennsylvania’s citizen-soldiers are fighting back with fly swatters and vacuums, dish soap and sticky tape. They’re stomping and spraying and zapping and bragging about their kills on social media. ‘DESTROY THEM,’ a propaganda poster urges. ‘Die, die, die, spotted lanternfly,’ a balladeer sings.”

You know it’s serious when there are balladeers.

We all will be singing an unhappy tune if we cannot eradicate this devastating pest from Pennsylvania.

So we all must stomp, spray, zap and squish these insects. With extreme prejudice. (But, please, don’t call the police. More on that in a moment.)

Spotted lanternflies feed on more than 70 kinds of plants — chomping on “nearly everything,” as Heather Leach, an entomologist who heads Penn State Extension’s spotted lanternfly program, puts it.

There are reports of lanternflies preying on basil, cucumbers, horseradish, black walnut, red and silver maples, and ornamental plants, including roses and peonies.

“I have yet to meet anyone who isn’t affected in some way by this insect,” Leach told LNP last year.

This year, it’s only gotten worse, as most of us have witnessed.

In addition to threatening our agricultural economy, the bug can be outright disgusting.

“It rains its clear, sticky, sugary waste — euphemistically called ‘honeydew’ — onto pools and decks, driving exasperated homeowners indoors,” wrote the AP’s Rubinkam. “Lanternflies aren’t shy, either. They will fly in your face, land on your shirt and crawl on the back of your neck.”

Lori Beatrice, a Chester County resident who claims to have killed “thousands” of spotted lanternflies, told the AP: “We’re outnumbered. It’s just gross. ... It’s like waking up in a nightmare.”

Killing our crops. Damaging our trees. Wrecking our gardens.

And crawling down our necks.

These planthoppers are repugnant. But there are right ways and wrong ways to go about battling them.

Calling the police is definitely the wrong way to handle the menace.

The official Twitter account for the Philadelphia Police Department was forced to send this note out on Sept. 12: “Please do NOT call 911 to report #SpottedLanternfly sightings. While they are a nuisance, they are not a police issue.”

Indeed, our police have far more important things to handle.

We must buckle down and deal with the insects ourselves.

In the ongoing lanternfly battle, here are some important things to keep in mind:

— For all of us, the Pennsylvania Department of Agriculture has a lengthy checklist that details items and areas we should check for egg masses, adults and nymphs. They include camping equipment, basketball backboards, ice chests, tarps, plant containers, firewood, storage sheds, shutters, dog houses, fences, sandboxes and window awnings. Basically, lanternflies can be anywhere. So we must check everywhere.

— By December, most of this season’s adult spotted lanternflies will have died off, and only the eggs will survive through the winter. Finding and destroying those egg masses on bark and in other locations is crucial. As we wrote last autumn, “a fresh egg mass looks like a smear of wet putty ... and an older mass looks like dried, cracked mud. Each mass can hold 30 to 50 eggs.”

To destroy eggs, Penn State Extension educator Timothy Elkner says to “get a container with a little alcohol in it and scrape the eggs into the container. That will kill the eggs.” Hand sanitizer can work in place of alcohol.

Defeating this pest might seem daunting. In fact, the Penn State Extension’s Leach told the AP that “controlling them on a population level is almost impossible at this point.”

But there is hope on the horizon. Scientists are “testing chemical and biological methods of control, including native fungi implicated in a lanternfly die-off in Berks County,” the AP reports, adding that “government contractors, meanwhile, are removing tree of heaven — an invasive tree that is the lanternflies’ preferred host — from public property.”

This battle is being waged on multiple fronts. But it means we must do our part on the homefront.