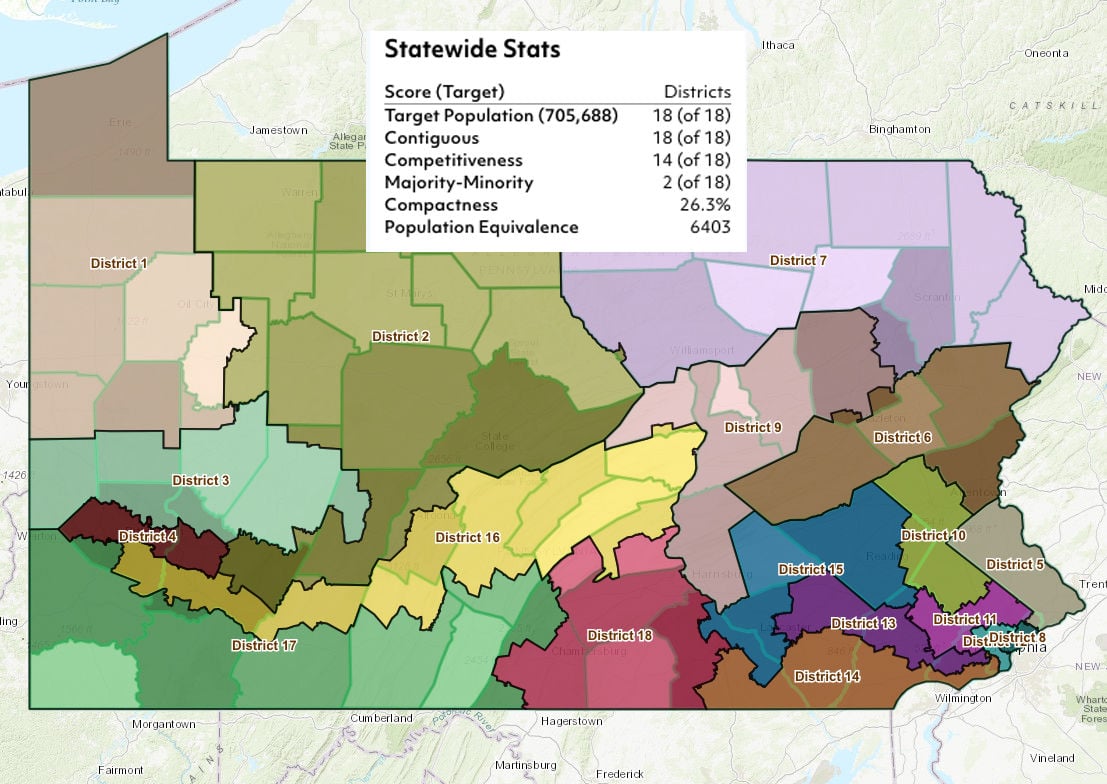 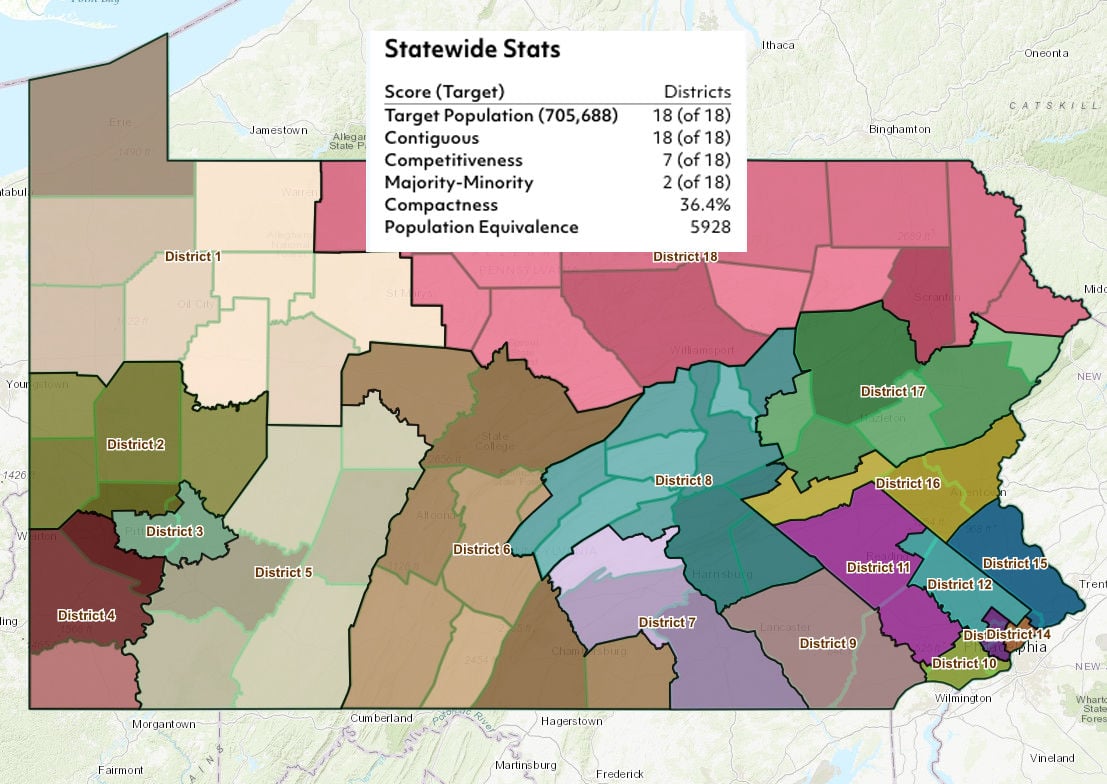 Manheim Township High School junior Rachel Matto earned an honorable mention in the Youth-Central division of the Draw the Lines contest with this congressional district map.

Manheim Township High School junior Rachel Matto earned an honorable mention in the Youth-Central division of the Draw the Lines contest with this congressional district map.

Students in the International Baccalaureate history class at Manheim Township High School recently took a crack at redrawing Pennsylvania’s congressional districts, with a number of them submitting their maps to the Draw the Lines PA contest. Two of the students — juniors Laura Craig and Rachel Matto — were recognized by judges in the Youth-Central division.

First, we want to commend the students in the class — and their teacher, Nicole Eshelman — for undertaking this assignment.

Talk about a challenge.

But it’s an innovative way for young people — on the cusp of being old enough to vote — to participate in democracy at the most basic level.

Gerrymandering has risen to become a front-and-center issue, particularly because the state Supreme Court redrew Pennsylvania’s congressional boundaries last year after it ruled the 2012 map was partisan and unconstitutional. (And while Pennsylvania has been cited for its especially egregious district map, gerrymandered congressional districts are not confined to our state by a long stretch.)

As we wrote last year in an editorial, gerrymandering “used to be a subject that made people’s eyes glaze with boredom. Many of us only had a vague sense of what it entailed. Now, so many Pennsylvanians are engaged.”

“Engagement in the political process is a win for democracy. Hopefully, this debate will lead to a greater understanding of how important it is to cast a vote and how precious that vote is.”

In a December editorial, we wrote that one of our wishes for 2019 was “for the state Legislature to agree to reform the redistricting process via an independent citizens commission that would keep out partisan gerrymandering.”

For their entries in the contest, sponsored by the nonprofit Committee of Seventy, students were tasked with drawing 17 congressional districts (the expected number that will result from the 2020 census).

Among the guidelines on which they were judged:

— Contiguity (no orphan sections of districts separated from the rest).

— Competitiveness (not a huge registration advantage for either party).

— Majority-minority districts (those with a majority of nonwhite residents, of which there are currently two).

Not exactly a piece of cake, especially for a class of teenagers encountering the nuts and bolts of redistricting for the first time.

But Manheim Township’s Craig and Matto managed to impress the judges enough to garner second place and honorable mention, respectively, in their division.

“I am not surprised,” their teacher, Eshelman, told LNP’s Alex Geli. “But I am proud of them for tackling this historic topic.”

Seeing her students delve into such a complex subject was “incredible,” she said.

Matto told LNP she was “really surprised but really, really happy” about the recognition, adding that she at first thought her map wasn’t “anything special.”

One of the challenges was drawing a sensible map that was fair and proportional, she said. Matto told Geli “she wanted to avoid previous iterations, which included some of the ‘strangest shapes I’ve ever seen.’ ”

In a statement on the Draw the Lines website, Craig recounted a similar experience: “One of the most challenging parts of creating a map with these priorities was constructing districts that met the population requirements but were also still competitive.”

“Lauren’s well-written and persuasive essay highlighted her logical and reasonable approach to mapping,” according to the judges. “She also had 14 competitive districts and preserved Pennsylvania’s two majority-minority districts. Her map features, as she puts it, ‘logically shaped’ districts with ‘smooth borders.’ ”

Craig’s map divides Lancaster County among three congressional districts: Two would favor Republicans by modest margins, and one would have a small Democratic edge, Geli reported.

Matto, meanwhile, groups Lancaster and southern Chester counties in a single district that would give Republicans a 13-point edge, according to Draw the Lines.

She won “honorable mention for her very clean map, which accomplished all three of her objectives — competitive elections, equal population and majority-minority districts,” the judges wrote.

This is how Matto described her map: “I thought that the best way to limit gerrymandering would be to create districts with the least amount of party advantage. The districts in my map were designed so that every person’s vote could make a difference.”

That last sentence perfectly sums up the bottom line when it comes to redistricting: Legislators shouldn’t pick their voters (the definition of gerrymandering); voters should choose their legislators.

We congratulate Matto, Craig and their classmates for understanding this, and reminding us once again why we support an independent citizens commission to eliminate partisan gerrymandering for good.