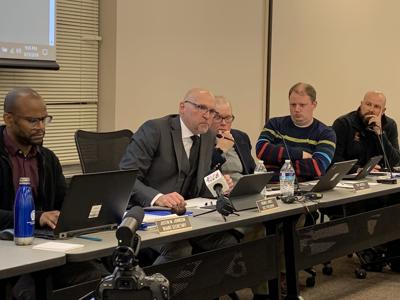 The Eastern Lancaster County school board has enlisted the services of a law firm “with what critics say is a history of fighting against the rights of LGBT students to help implement, and potentially defend, its controversial student privacy policy,” LNP’s Alex Geli reported last week. Randall Wenger, chief counsel for the Independence Law Center, will represent Elanco at no cost in matters involving the policy, which states that transgender students should use restrooms and locker rooms based on the sex assigned to them at birth. The school board voted 5-1 on July 15 to work with the law center. Board Vice President Rodney Jones “was the lone dissent,” Geli reported. Jones has resigned from the board.

We’d like to remind the Elanco school board that there is a child at the center of this controversy.

A child who is required, by state law, to attend school until age 18. And that school, by law, must keep him safe from bullying — by fellow students and adults alike.

The Elanco school board has made that task much more difficult.

To recap: In early April, the Elanco school board unveiled a multimillion-dollar proposal to renovate district restrooms and locker rooms to ensure the privacy of students — all students. We thought it was a sound plan.

But some district residents objected to the idea of transgender students using, in the meantime, facilities that aligned with their gender identity. So the school board tacked on an addendum to its proposed bathroom policy that recommended “that (wherever) we cannot provide private (single-user) facilities when changing or using the bathroom facilities, the students are to use the facilities based on their biological sex.”

It was a blatant invitation to litigation.

Now, the Elanco school board members have turned a discussion over the accommodation of a transgender student into a culture war. And by inviting the Independence Law Center into the mix, they have turned up the heat on an already heated issue.

— Why is a law center devoted to advancing the cause of religious freedom now partnering with a public school board whose aims are supposed to be educational, not religious?

— And does no one on the Elanco school board remember what happened in the early 2000s when the Thomas More Law Center backed the Dover Area School District school board in its defense of a policy that required informing biology students about intelligent design?

In December 2005, a federal judge appointed by President George W. Bush ruled that intelligent design was based on religious belief and including it in a public school curriculum violated the Constitution.

The Dover Area School District — and its taxpayers — were left with $1 million in legal fees, according to the York Daily Record. That York County community was left reeling.

And not a single school board member who pushed for the intelligent design policy was reelected.

The Independence Law Center is affiliated with the Pennsylvania Family Institute, a Harrisburg-based nonprofit that, according to the law center’s website, “works to preserve religious liberty, promote marriage and the family, and protect human life.”

The Independence Law Center and Pennsylvania Family Institute relish cultural battles. And they are skilled at waging them.

Wenger was part of the legal team that represented Conestoga Wood Specialties when that East Earl-based cabinet manufacturer’s pro-life owners argued they shouldn’t be required by federal law to include emergency contraception in their company’s health insurance plan. Conestoga Specialties — along with co-plaintiff Hobby Lobby — prevailed in the U.S. Supreme Court in 2014.

It’s not farfetched to imagine that the Independence Law Center envisions taking the transgender rights issue embroiling Elanco all the way to the nation’s highest court.

In 2016, when interviewed by LNP about Lancaster Bible College’s request for exemption from Title IX regulations prohibiting anti-LBGT discrimination, Wenger said human sexuality and gender are “core to religious teaching” and people and institutions “deserve space to live according to those religious beliefs.”

He was talking about a private religious college at the time.

But Elanco is a public school district. And it is bound by both Title IX and the Pennsylvania Human Relations Act to protect transgender students from discrimination.

What the courts say

In late May, the U.S. Supreme Court declined to review a case involving transgender student rights in Boyertown Area School District (near Pottstown).

Boyertown began in 2016 allowing transgender students to use the restrooms and locker rooms that aligned with their gender identity. A group of students sued the school district, claiming that the policy violated their constitutional right to bodily privacy. They lost in federal district court, and then in the U.S. Court of Appeals for the 3rd Circuit, which ruled in July 2018 that the presence of transgender students in school restrooms and locker rooms does not offend “constitutional or Pennsylvania-law privacy interests,” and that the school district “clearly had a compelling state interest” in shielding transgender students from discrimination.

But the U.S. Supreme Court’s decision to let that ruling stand doesn’t mean it won’t revisit the issue at some point.

We imagine the Independence Law Center is spoiling for a fight — this fight, in particular.

We just don’t understand why the Elanco school board — or any school board — would be. Because it’s almost certain to be sued over its policy on transgender students. And it’s likely to lose.

Should that happen, it won’t be the Independence Law Center saddled with any resulting legal costs. It will be Elanco’s taxpayers.

In our view, the Elanco school board members seem to have abandoned their fiduciary duty to keep the district from being sued.

And they have turned an educational policy dispute into a potential circus, inviting the attorneys of the Independence Law Center to serve as ringmasters.

Step right up, cultural warriors and bloggers and publicity hounds. And step right over, if you please, the child at the center of all this.

Now he’s about to be used as a symbol in a culture war no one is going to win — least of all him and other vulnerable children watching worriedly to see how this plays out.

Today, former special counsel Robert Mueller will testify before the U.S. House Judiciary and Intelligence committees about his investigation into Russian interference in the 2016 presidential election. The first of two sessions is slated to begin at 8:30 a.m.

We urge you to tune in — and not to MSNBC, Fox or CNN. Watch C-Span instead for the unvarnished, unfiltered testimony.