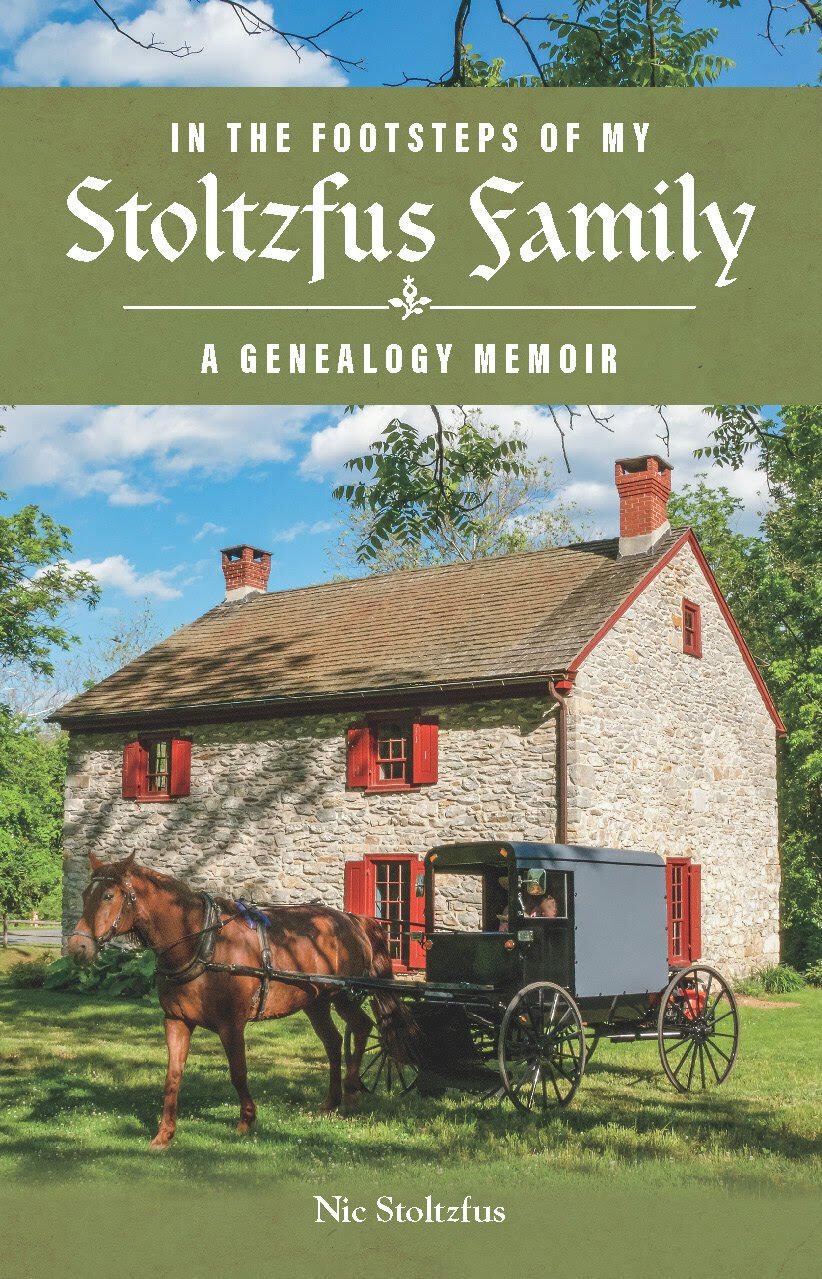 New book by Nic Stoltzfus taps into more of his family's roots.

New book by Nic Stoltzfus taps into more of his family's roots.

Back in the early 1990s, the essayist and nature writer Scott Russell Sanders, then a literature professor at Indiana University in Bloomington, wrote a book about the importance of rooting oneself in a place. He called his book “Staying Put.”

After wandering around the country and committing himself to a small city in the Indiana hills, Sanders said this:

The Scribbler recalled that assertion while reading through Nic Stoltzfus' new book, “In the Footsteps of My Stoltzfus Family: A Genealogy Memoir” (published this month by Masthof Press).

Sanders is relatively old now. Stoltzfus is relatively young. They share a reverence for place. In Stoltzfus’ case, the place is the Stoltzfus Homestead in Wyomissing, Berks County. The first Stoltzfus immigrant settled there in the mid-18th century before his son moved south and began generating a legion of Lancaster County Stoltzfuses.

Nic Stoltzfus left his native Florida in 2018 and moved to the Stoltzfus Homestead as caretaker. Last year he published a book about the homestead called “German Lutherans to Pennsylvania Amish: The Stoltzfus Family Story.” The new book provides more details.

Stoltzfus was not the obvious person to chronicle the homestead and the family. He had altered his name — “Stoltzfus” seemed awkward in Florida — and had little interest in his ancestry — “I had uprooted that family tree, shook all the dirt off those roots, and tossed it aside in favor or supplanting it with one of my own design,” but the changes did not take.

His adventures researching his family’s genealogy will interest some readers. The Scribbler was impressed by Stoltzfus’ transformation from a young man who thought he could ignore his roots into a rooted man with an entirely different outlook.

“Less than a decade ago, I had completely rejected my last name and my heritage,” he concludes. “My parents told me that such things were important, but I didn’t understand why. ... I went back to Germany and Pennsylvania and discovered my roots. This journey has changed my life completely. ... Knowing where I come from grounds me and gives me a steady foundation for the future.”

Stoltzfus plans to “stay put” in Pennsylvania, specifically near the Stoltzfus Homestead, a place he describes as “a beacon for us when we have lost our way or when we are trapped in the hustle and bustle of our harried and busy lives.”

Don’t be glum: Mood rings are making a comeback [The Scribbler]

Several years ago, the Scribbler asked which is the oldest cemetery in Lancaster County. The answer was inconclusive.

The Tschantz Graveyard on the west side of Pequea Lane, south of Penn Grant Road, used to claim it was the oldest, dating to 1733. But the oldest surviving tombstone there is dated April 29, 1739.

The oldest original tombstone in Lancaster County is Elizabeth King’s stone in the Old Chestnut Level Presbyterian Church Graveyard in Drumore Township, according to Darvin Miller, a cemetery researcher. That stone is dated Feb. 21, 1732.

Jean Eggert, of Lancaster, provides a close-but-not-quite competitor. Hans John Hess died sometime in 1733 and is buried south of Lancaster at Baumgartner Station. Eggert is related through her mother's side.

Jack Brubaker, retired from the LNP staff, writes “The Scribbler” column every Monday. He welcomes comments and contributions at scribblerlnp@gmail.com.

Did President John Tyler own a piece of Lancaster? [The Scribbler]

In this season when most people wish each other “peace on earth, good will to men” — even though some men and a virus are severely testing tha…

The S. Clyde Weaver company has prepared and sold meat, cheese and other edibles for 100 years, so the family decided to produce a commemorati…