He was the husband of the late Eleanor S. Huff who departed life on December 9, 2013. Thomas was born in Fall River, MA on August 26, 1922, the son of Patrick and Lily (Crane) Hickey. He was the youngest, and last survivor, of 4 children.

Thomas completed a 4-year apprenticeship at the Naval Torpedo Station, Newport, RI and was a journeyman machinist. A veteran of WWII, he enlisted in the U.S. Army in 1942 and was honorably discharged in 1946 as a First Lieutenant B-17 Bombardier. He held degrees from the Rhode Island School of Design and from Northeastern University, Boston, MA. He was a registered Professional Engineer and a member of Sigma Epsilon Rho Honor fraternity. He held several patents for machinery in the textile and paper making fields. He enjoyed team sports and was a member of the Philadelphia Curling Club for over 20 years, serving as Vice-President for 2 terms and made many trips to Scotland and Canada to curl local teams. Recently he bowled in the senior league at Blue Ball Lanes.

Also preceding him in death were wives Doris I. Hickey (mother of his children) in 1973, and Marjorie E. Hickey formerly of Honey Brook.

At his request, services will be held by individual family members at their location and convenience, and a private interment will be at Our Lady of Czestochowa Cemetery, Doylestown, PA.

Memorial contributions in Thomas' name may be sent to the charity of one's choice.

Plant a tree in memory of Thomas Hickey
A living tribute » 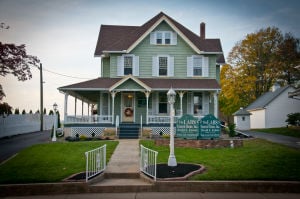