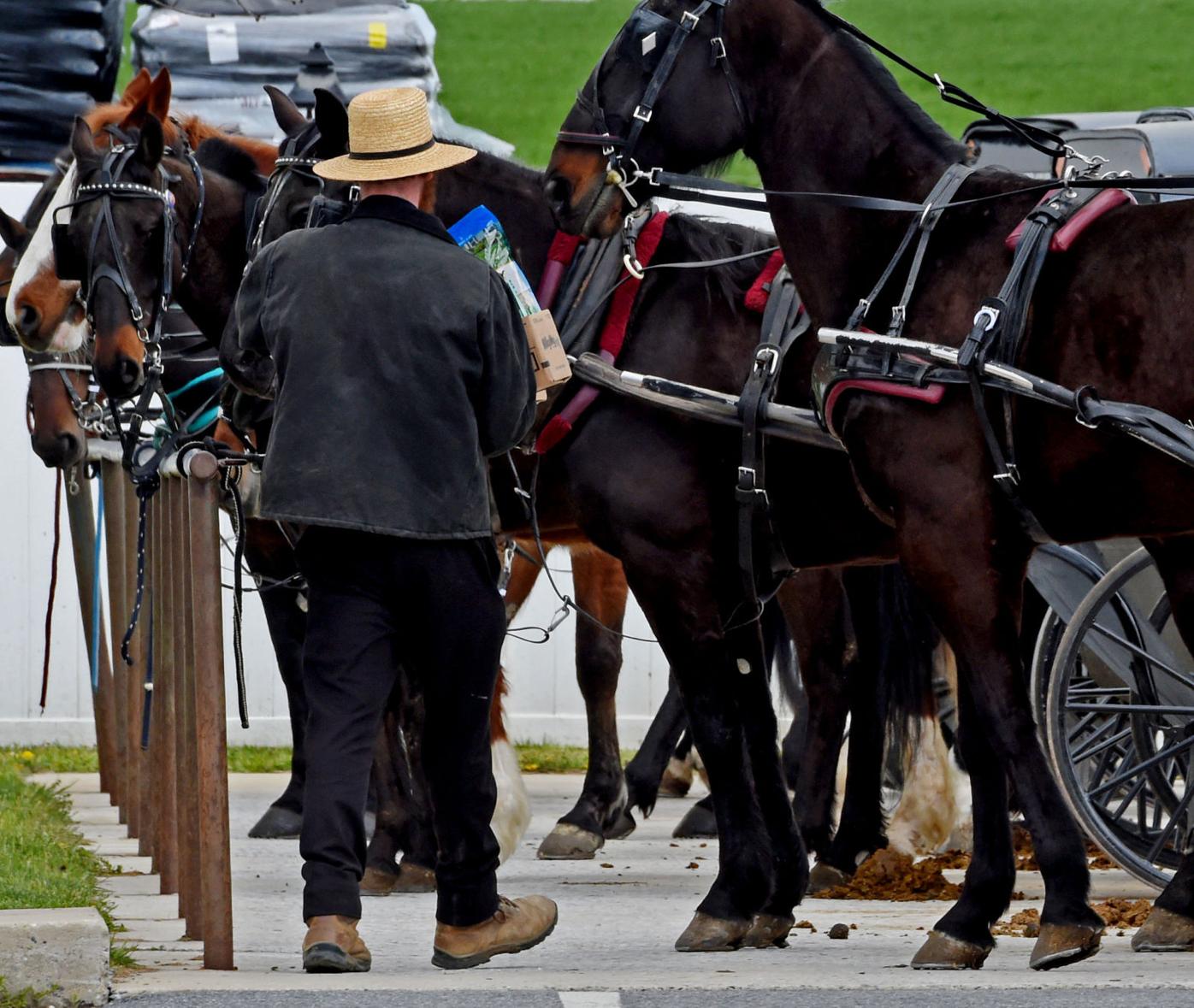 A man carries items toward buggies parking at Bird in Hand Farm Supply in Leacock Township on Saturday, April 11, 2020. 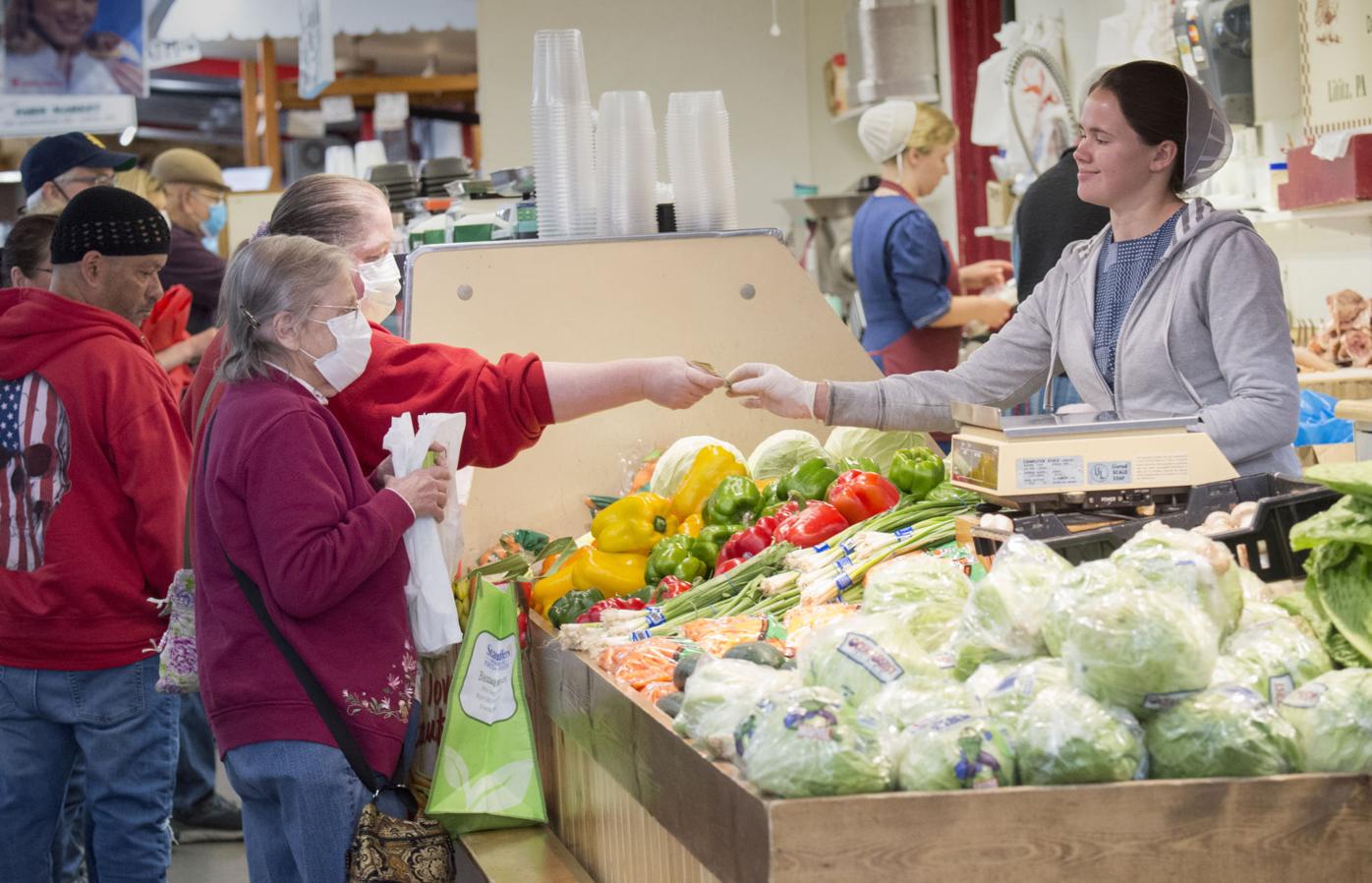 Customers wearing masks purchase items at the Sensenig Poultry stand inside Roots Country Market & Auction in East Hempfield Township on Tuesday, April 7, 2020. Many of the stands were close and the number of shoppers was less than normal presumably because of the COVID-19 pandemic. 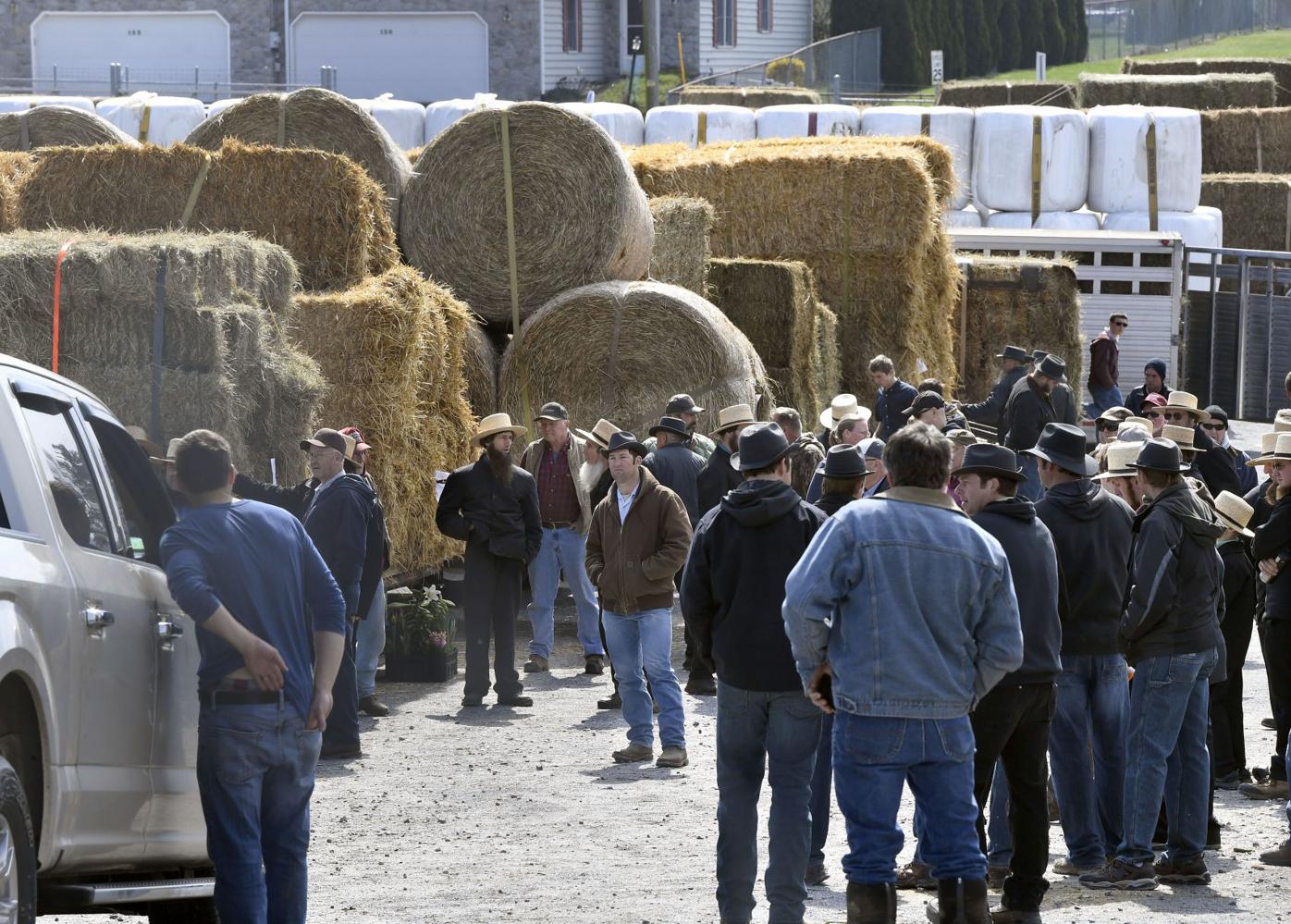 People gather for a hay auction outside the New Holland Sales Stables on Monday, March 30, 2020. 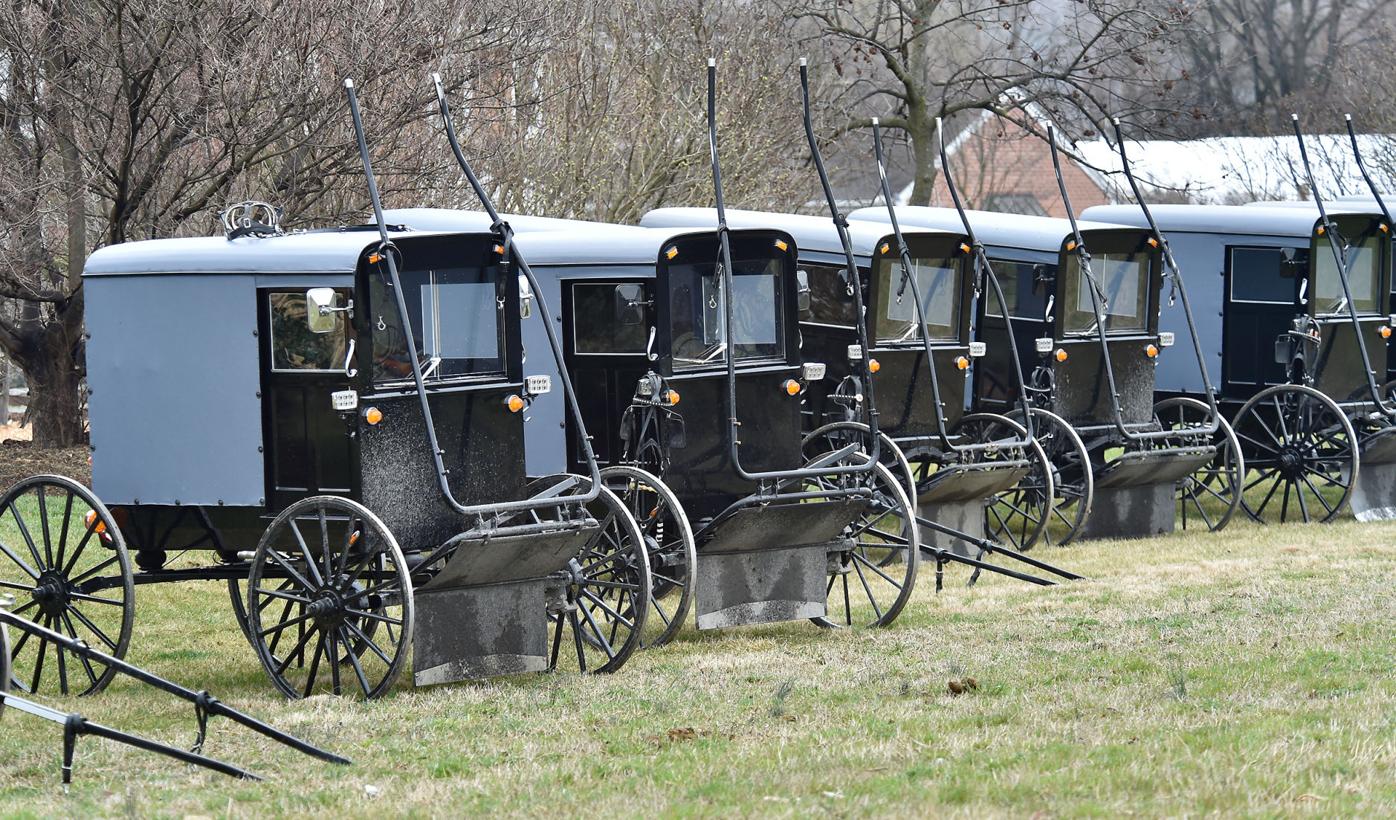 Amish buggies are parked at a home along the 900 block of New Holland Road south of New Holland for a wedding celebration on Tuesday, March 17, 2020.

A man carries items toward buggies parking at Bird in Hand Farm Supply in Leacock Township on Saturday, April 11, 2020.

Customers wearing masks purchase items at the Sensenig Poultry stand inside Roots Country Market & Auction in East Hempfield Township on Tuesday, April 7, 2020. Many of the stands were close and the number of shoppers was less than normal presumably because of the COVID-19 pandemic.

Early this month, Bird in Hand Farm Supply stood out, one of the few storefronts remaining open on a stretch of Old Philadelphia Pike that passes through a portion of Lancaster County typically teeming with tourists but now mostly shuttered due to the spread of COVID-19.

Outside, a man stood stacking bags of soil into a neat column, seemingly unaffected by the contagious, potentially deadly respiratory virus.

“I’m not doing much adjusting. I’m just living my normal life,” he said.

The man wore a straw hat with a dark shirt and slacks, identifying himself as a member of one of the county’s Plain communities — Amish and Old Order Mennonites.

In the weeks since the novel coronavirus was detected in central Pennsylvania, Plain people have caught the attention of their modern neighbors, who worry they aren’t following social distancing guidelines. There have been reports of Plain people in large groups at hay auctions, mud sales and weddings.

But Alice Yoder, with Lancaster General Health, warned against profiling Plain people as rule breakers, who don’t believe in modern medicine. After all, many modern-living residents are choosing to ignore guidelines, too, she said.

“Amish people would be no different,” she said. “Perhaps you are more aware of them because they dress differently.”

‘We do know this is very serious’

They don’t just dress differently, but they behave differently, too, often favoring privacy, reluctant to share their full names, ages or even which town they live in.

“We do know this is very serious,” he said about the coronavirus. “We don’t want to take this lightly.”

Speaking over the phone, he said Amish schoolhouses had already been closed for weeks. Biweekly worship services — held within the close quarters of private homes — had been canceled. Funerals were limited to only small gatherings. Youth groups and social gatherings had temporarily ended. He guessed that an upcoming communion ceremony might be postponed.

He was even aware of the term “social distancing” and its definition, which warns that people should remain 6 feet apart to limit the virus’ spread. That guideline, as well as others from the U.S. Centers for Disease Control and Prevention, were being followed, he said.

“There is concern,” the Amish man said.

That concern, he said, is warranted. He knows so because he’s read in both Amish and modern newspapers about the thousands of virus-related deaths. He admitted that just as much news comes second-hand from modern farmers, construction workers and drivers who interact with the Plain people on a regular basis.

“You have a lot of rumors, gossip,” the Amish man said. “At this point, there were stories that one lady supposedly had it.”

Once those rumors get started, they can quickly spread from household to household, said Steve Nolt, professor of history and Anabaptist studies at Elizabethtown College.

That’s true whether the information is accurate or not, Nolt said, claiming members of rural communities — Plain or not — have “been a little slower to take this seriously.”

‘Some seemed surprised and unaware’

To many Plain people the words of expert doctors and state health officials hold little weight over trusted neighbors and regular visitors to their communities, according to Lisa Davis, outreach director at the Pennsylvania Office of Rural Health, based at Penn State University. So it’s those trusted sources that experts turned to during this pandemic, she said.

Rural Health officials issued a letter to the Plain people, which offered warnings and virus-avoidance guidelines.

“The number of COVID-19 cases are constantly climbing,” it reads. “Some think that this virus is a political ploy but that is a misconception and people of all political parties are dying.”

Each infected person who attends a large gathering could infect three to five others, the letter warns, citing Holmes Morton, a medical doctor who founded the Clinic for Special Children in Strasburg, which predominantly serves Amish and Mennonite families.

During a Wednesday evening phone call, Morton, who now operates a similar clinic in Mifflin County, said he's been treating Plain people for more than 30 years.

“I do spend a lot of my time trying to educate the community,” Morton said, adding that there’s “no question” his consistent presence has allowed him to garner trust.

The Rural Health letter was signed by Jim Harvey, the office’s worker protection standard specialist, who’s worked closely with Plain people for more than a decade.

“You build up trust, hopefully,” he said, admitting that the message still might not be getting through to all members of those communities. “We have heard some things that concern us.”

State agriculture Secretary Russell Redding also got involved, asking officials at the Lancaster County Conservation District to deliver COVID-19 guidelines and information to the local Plain people. And Christopher Thompson, district manager for the conservation district, confirmed that request was fulfilled in Lancaster County, where the Amish population is estimated at about 40,000.

“Some seemed surprised and unaware, others said they had heard about it but didn’t think it was too big of a deal,” Thompson said before conceding that many were taking it more seriously.

“We are not conducting field visits right now,” he said, “but just before that stopped, I was hearing from technicians that the message was being heard by the Amish farmer/landowner because they would not stand closer than 8 to 10 feet away.”

‘We don’t really know what to expect’

Those efforts, she said, have paid off. That’s been apparent at least three times when symptomatic Plain people visited a drive-thru COVID-19 testing site along Greenfield Road in East Lampeter Township. Two were driven, and one arrived in a horse-drawn buggy, she said.

That’s a good sign for the Plain community, which typically resists modern medicine in anything but dire health emergencies, Yoder said.

“It’s very unusual,” she said. “We don’t really know what to expect. They typically just stay at home and deal with it.”

Yoder could not confirm whether any Plain people had tested positive for the virus.

Often Plain people will rely on home remedies, said a Lancaster County Amish man, who identified himself as a freelance writer for Plain newspapers. He touted his wife’s “oils.”

But in this case, the writer said he understands oils won’t cut it, speaking in favor of social distancing and medical treatments.

“It’s necessary," he said, calling the virus scary. “We are not trying to stick our head in the sand.”

COVID-19 peak projections are constantly changing. We tried to find out why. [Q&A]

'We need to be prepared for any number of deaths': How Lancaster County's coroner handles COVID-19

Decades after officials first considered a county health board, the idea is revisited

Today is the last day to bid on a Robert Nelson art piece, with funds going to Lancaster General Hospital COVID-19 fund

A former Millersville professor is offering a new art piece for an auction towards Lancaster General Hospital's COVID-19 fund.

Nearly all who died of COVID-19 in Lancaster County were 60 or older, officials say

Nearly 6.3% of the 828 Lancaster County residents who have tested positive for COVID-19 as of Monday have died, and almost all of them were 60…

How Lancaster County parks, rangers are responding to COVID-19

How did Amish schools handle the coronavirus pandemic? We asked 3 experts

In mid-March, Pennsylvania Gov. Tom Wolf ordered all Pennsylvania schools to close, prompting an abrupt shutdown of the state’s public and private schools – and, it turns out, Amish one-room schoolhouses.

In past decade, 6 Lancaster County townships accounted for nearly half of buggy-related crashes with injuries [analysis]

Crashes involving horse and buggies in Lancaster County have declined slightly over the past decade, but they still result in numerous injurie…