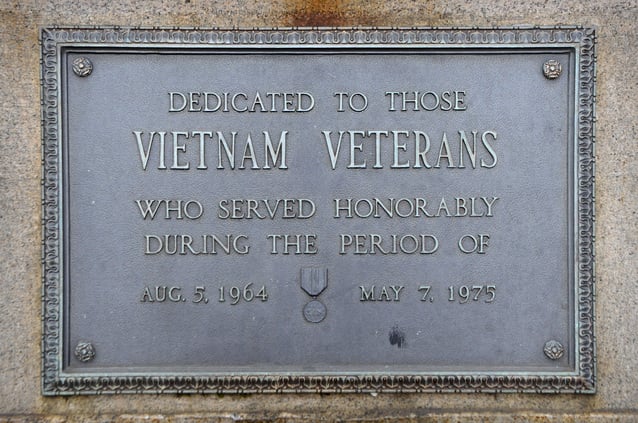 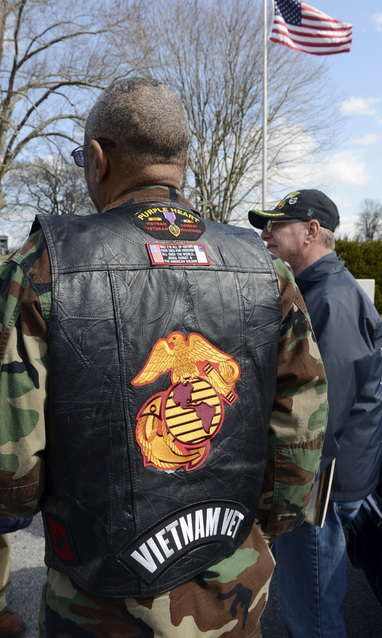 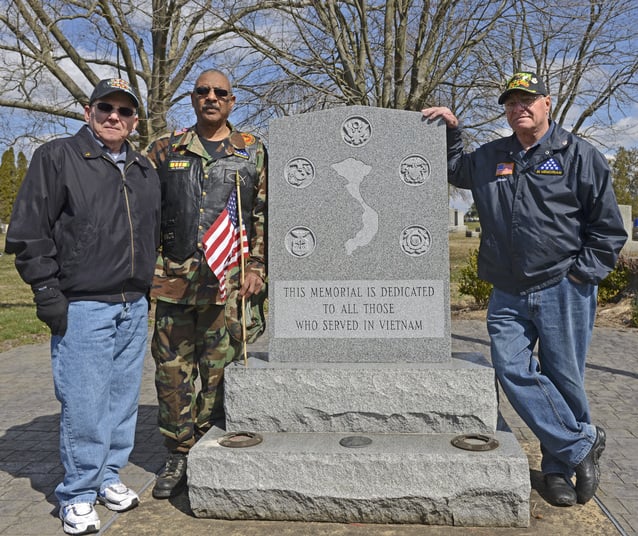 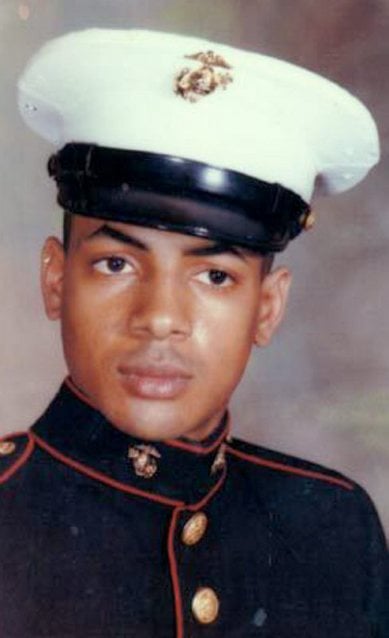 Lewis Alston in a picture from his Vietnam years 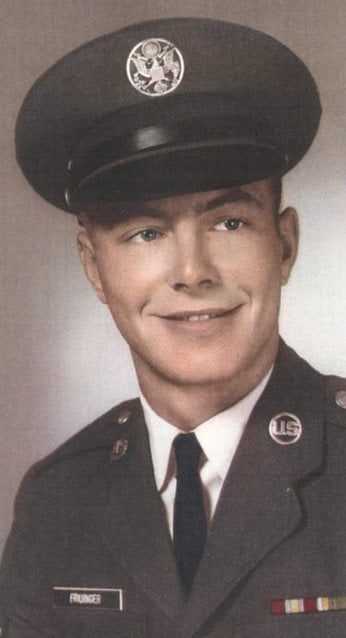 Charles Fridinger in a picture from his Vietnam years

Ken Ford in a picture from his Vietnam years 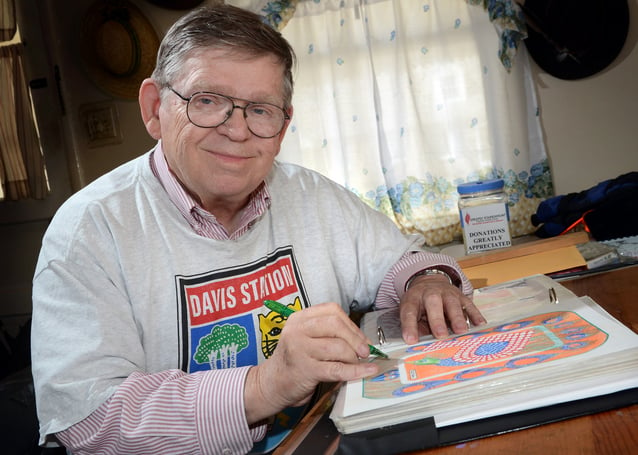 Bill Hoin is shown in his Vietnam reunion T-shirt with his artwork. (Marty Heisey/Staff) 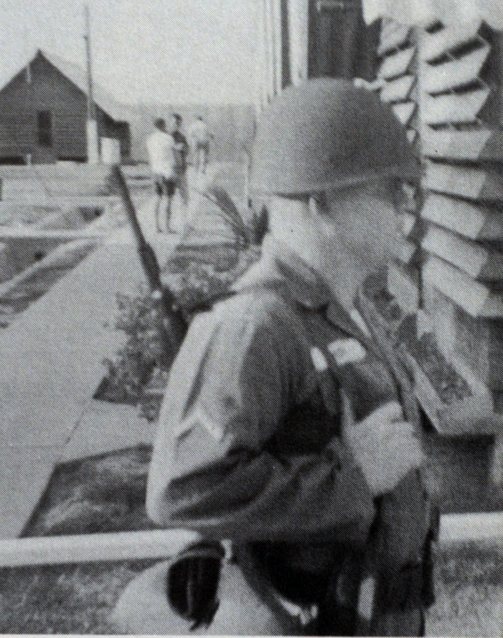 Bill Hoin is shown on duty at Davis Station, Tan Son Nhut Air Base, Saigon, in 1963. 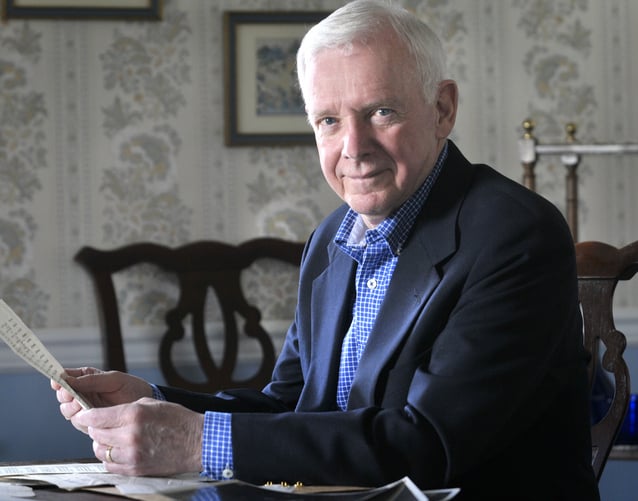 Dick Hoxworth is shown in uniform in 1965. 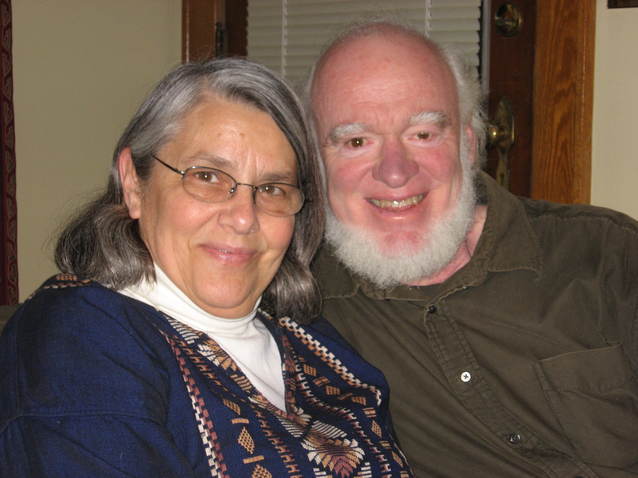 Pat and Earl Martin are shown in a recent photo. 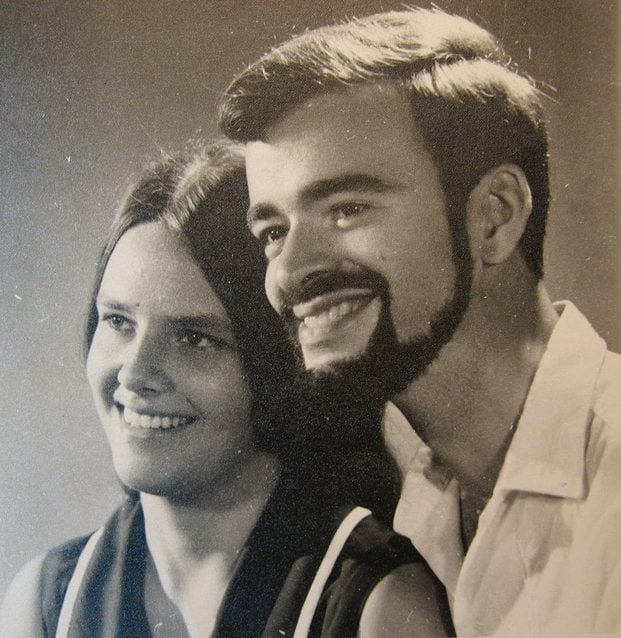 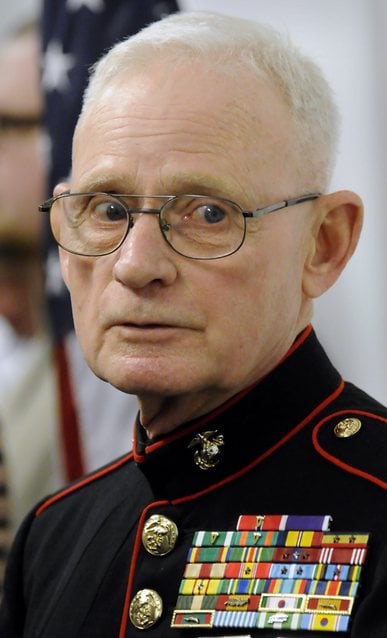 Lewis Alston in a picture from his Vietnam years

Charles Fridinger in a picture from his Vietnam years

Ken Ford in a picture from his Vietnam years

Bill Hoin is shown in his Vietnam reunion T-shirt with his artwork. (Marty Heisey/Staff)

Bill Hoin is shown on duty at Davis Station, Tan Son Nhut Air Base, Saigon, in 1963.

Dick Hoxworth is shown in uniform in 1965.

Pat and Earl Martin are shown in a recent photo.

Early in the winter of 1963 - more than 50 years ago - Bill Hoin traveled to Vietnam with the Army Security Agency. He went to war before the war began.

Earl S. Martin left Vietnam in July 1975 - four months after the fall of Saigon. A conscientious objector who helped clear unexploded land mines, he remained after the war ended.

Hundreds of other Lancastrians spent a year or more in Vietnam between 1963 and 1975. Some volunteered for service. Many were drafted.

By the early 1970s, most veterans were more than ready for the long, frustrating war to end. So they were pleased when the last U.S. troops came home 40 years ago this spring.

"We weren't fighting for the country and politics," observes Charles Fridinger Jr., of Manor Township, who served with the Air Force in Vietnam in the late '60s. "We were fighting for each other so we could go home."

More than 2.7 million Americans served in Vietnam, supporting the South Vietnamese in their fight against the communist North Vietnamese and their southern allies, the Vietcong.

More than 58,000 U.S. soldiers, including 76 from Lancaster County, died in the jungles of bamboo and elephant grass.

As the conflict progressed, it became increasingly controversial, especially when Vietnamese civilians were caught in the crossfire.

Many Vietnam veterans were ignored or denigrated when they returned to the United States. Now in their 60s and 70s, some remain bitter about that.

Bill Hoin was 23 years old when he left for Vietnam in January 1963. A radio monitor for the Army Security Agency in Saigon, his mission was "top secret."

"We weren't allowed to tell people we were there," recalls the 73-year-old Manheim Township resident.

Hoin's experience in Vietnam was primarily positive. He developed what would become a lifelong dedication to art, culminating with coordination of the recent Lancaster Veterans Art Project.

His greeting upon returning from Vietnam in 1964, however, was not so pleasant.

"I went back to Millersville [University] on the GI Bill," he says. "That's where I got my nickname as a 'baby killer.' "

Hoin says his experience was not unusual.

"The hardest thing was coming back and having to be around people who really didn't know what was going on over there and then the way they treated veterans," he says.

As a Mennonite and a conscientious objector who volunteered for service in Vietnam in the late 1960s and again from 1973-75, Earl Martin received a different reception when he returned to Lancaster County the first time.

He and his wife, Pat, had worked with refugee farmers in the embattled north of South Vietnam. Academic and church groups invited them to share their experiences.

"We told stories about the people of Vietnam," Martin recalls. "Certainly not everybody agreed with our understanding, but basically we tried not to be political about it but to share the stories."

Now 68 and living in Harrisonburg, Va., the New Holland native says one of his enduring memories is of the friendliness he experienced upon meeting U.S. soldiers during the war.

"When we would explain what we were doing in Vietnam," he says, "many times soldiers would say, 'Oh, that's wonderful. We thought we were coming here to help the people, too. We see now that we're just shooting up the countryside.' "

The Vietcong also were shooting up the countryside. One of the American soldiers they hit was Lewis Alston, an 18-year-old McCaskey dropout whose tour of duty as a Marine corporal ended in 1970.

Shrapnel struck his head and shoulder. The concussion still plagues him.

"I can't remember where I am sometimes" he says. "I was just blown up too many times."

Following a recent heart attack, the Manheim Township resident, now 61, says he has been diagnosed as a victim of Agent Orange, the herbicide sprayed widely by U.S. forces in the Vietnam jungle.

He says he long ago overcame drug and alcohol addiction prompted by post-traumatic stress disorder. Today he channels his stress in positive directions, as a Veterans Court mentor, and member of the Red Rose Veterans Honor Guard.

How to measure the medical effect of the war on veterans has been as controversial as the conflict itself.

The Centers for Disease Control and Prevention has determined that Vietnam veterans are getting sick and dying at only a "slightly higher" rate than non-veterans.

On the other hand, the Veterans Administration acknowledges that more than a dozen diseases - including several cancers, Type 2 diabetes and heart disease - are "directly linked" to exposure to Agent Orange.

The VA is now completing a comprehensive study of the health impacts of the war.

Some veterans say that study will validate what they already know.

"We have a lot more cancers and those sorts of things," says Fridinger. "Vietnam veterans are dying off at the same rate as World War II veterans but 20 years younger."

Several years ago, Lancastrian Gary Levinson, who served in the Army in Vietnam in the late '60s, began tracking the ages of hundreds of veterans whose obituaries appeared in the Vietnam Veterans of America magazine.

"I noticed a consistent average age at death to be about 65, which is much lower than for veterans of World War II and Korea," Levinson says. "I am sure Agent Orange exposure is one of the factors contributing to this."

Physical ailments are only part of the problem, says Gary Hummer, whose Purple Heart disposal business in Ephrata is named for the medal he received after being shot in the chin in Vietnam.

"It was a minor physical wound," he says, "but not minor in the sense of its mental impact."

Hummer was 19 and a recent Hempfield High School graduate when he volunteered as an Army infantryman in 1969. He was in almost continuous combat for a year.

Now he is 63. He says he will never get the war out of his head.

"The worst part of being there was the stress 24/7," he says. "You're always afraid, always anticipating something about to happen. You don't forget that."

That's hard to explain to "someone who doesn't know how it was over there," Hummer says. "How can they know?"

They could not know, says Dick Hoxworth, who enlisted in the Air Force in 1965, following graduation from McCaskey High School and before beginning his four-decade broadcasting career with WGAL-TV.

Stationed in Japan, Hoxworth worked with classified documents and reported daily casualties to military personnel in the United States.

When he returned home in 1968, he had no problem in San Francisco, where he wore civilian clothes. But in Pittsburgh, where he returned to uniform to get a reduced air rate, three young people accosted him.

"One ran his finger over a medal on my chest," Hoxworth recalls. "He said, 'What did you get that for? Killing babies?' "

Another of the trio spat on his uniform.

But a Korean War veteran came along and led Hoxworth away from trouble.

"That was my welcome home," Howorth says. "The veteran told me the country had changed. It wasn't the same."

He never wore his uniform again.

Ken Ford, secretary of Lancaster's Vietnam Veterans of America, Chapter 8, worries about the continuing image among some people of the Vietnam soldier as a killer of civilians.

The Manheim Township resident, now 66, fought as a lance corporal with the 11th Marine Artillery during his tour of Vietnam from 1967-68.

"The atrocities have been well documented," he says, "but the accounts leave out why they happened.

"Every veteran in Vietnam can give you a time when you weren't worrying about who was shooting at you," he explains. "You couldn't care about what you hit. Once somebody starts shooting at you, that's your enemy, no matter how old he or she is."

Ford says more people understand that today than they did in the 1960s, when he returned to "dirty looks" from civilians.

"There's no comparison between now and then," he says. "Now most people honor the veteran."

But there still are no parades, says Fridinger, who was pelted by tomatoes and eggs when he wore his sergeant's uniform after his discharge in California.

"York had a Vietnam veterans parade recently," he says. "Other cities have them. There never has been a parade in Lancaster."

There are no parades, but there are memorials.

On Memorial Day, 25 years ago, a Vietnam monument was dedicated in the Garden of Honor at Lancaster's Greenwood Cemetery. The granite memorial is engraved with a map of Vietnam and the names of Lancaster's 76 war dead.

Plaques memorialize the war on both the north and east sides of the Soldiers and Sailors Monument in Penn Square.

And the Dillerville Road bridge is named for the late Capt. Ed Davis, who was shot down on his 58th combat mission for the Navy in 1965. He was captured and released after spending more than seven years as a prisoner of war.

Another war hero, Sgt. Ron Gentry, recently received an overdue Bronze Star for his service as a Marine forward military observer under hostile fire during "countless missions" in Vietnam.

The career Marine served two tours in Vietnam before returning to Parris Island, S.C., as a drill instructor.

Now 76, the Brownstown resident reflects on how his experience coming home differed from others.

"I mixed with other Marines and kept on going," he says. "So I didn't feel the way a lot of them who came back and were discharged into the community saw it."

Gentry also has a more positive recollection of his experience in Vietnam than some veterans.

"I thought we were there for a noble cause," he says. "I had some doubts about the congressional end of it back here in the United States and the way it was being run. But we went. We did what was expected of us and tried to make it back to our families in one piece."

Among the Lancastrians who did not make it back is William David Port. He was manufacturing candy at Klein Chocolate Co. in Elizabethtown when the Army drafted him in 1967.

During combat in January 1968, Sgt. Port threw himself on an enemy grenade and absorbed the impact, saving the lives of fellow soldiers.

He is Lancaster County's only Medal of Honor recipient from the Vietnam War and the sixth medal recipient in the county's history.

He also left his mother, who later said that Port had ended every letter from Vietnam with the words, "War is Hell."

No Vietnam veteran is likely to argue with that.

Vietnam veterans look back with pride

LNP | LancasterOnline wants to recognize Lancaster County's veterans, as well as the men and women on active duty in the armed forces. The sto…