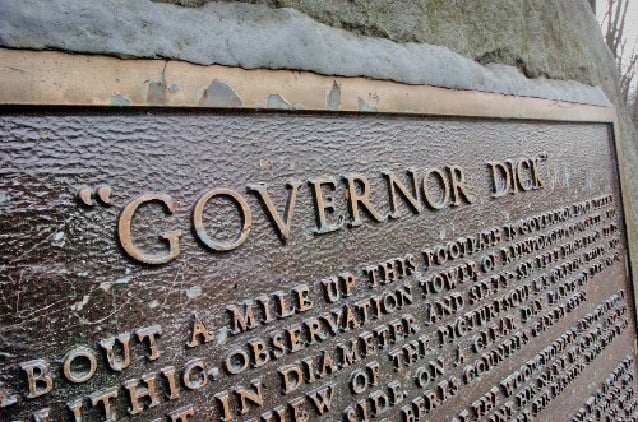 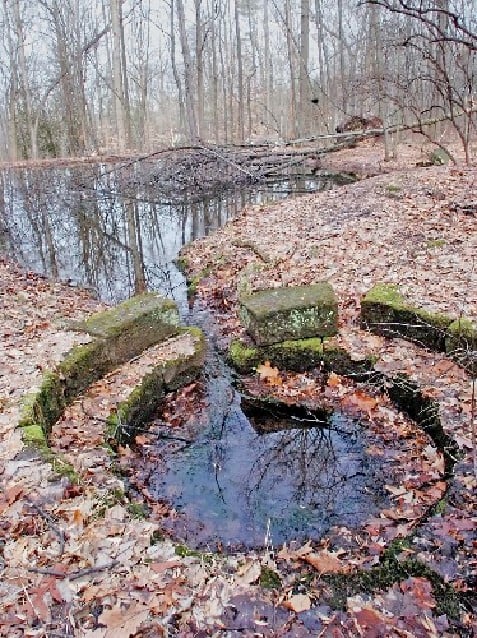 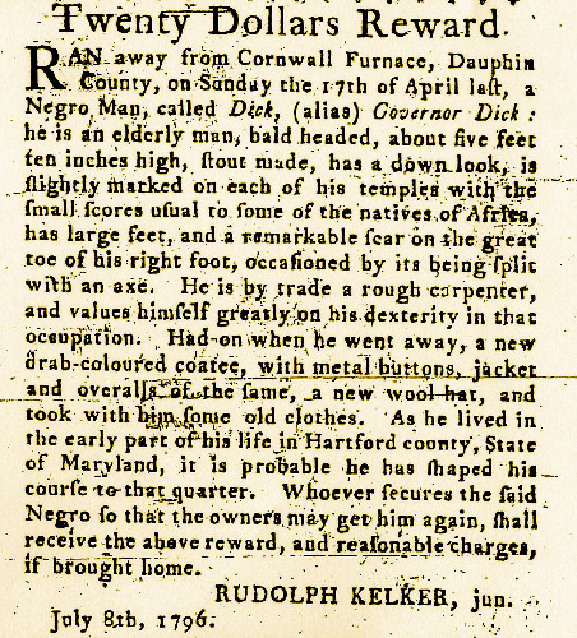 More than two centuries ago, a black charcoal burner named Governor Dick blazed the land with his axe - and his name.

The sturdy woodsman's legacy lives on in the namesake Lebanon County park created in 1953. But human memory is less robust.

Some visitors to the park think it commemorates former Pennsylvania Gov. Dick Thornburgh.

An old brass plaque at the foot of the Mount Gretna hill where Governor Dick is said to have sheltered does not mention the intriguing possibility that he escaped slavery late in life.

No one is certain of his beginning or his end. Exactly why he became prominent is a mystery.

"People just don't know who he is," said Bill Knapp, of Lititz.

Knapp and other lovers of the history-laden 1,105-acre reserve think that's a shame.

Hinshaw, the head of the college history department, said he expects to direct a couple of student interns in a summer or fall project.

They have their work cut out.

Governor Dick lore is legion. By popular accounts, he was a talented stonemason and a backwoods shaman.

Whatever else he might have accomplished, said Patricia Gibble, an anthropologist and archaeologist at Elizabethtown College, Governor Dick and his peers played a huge role in building the country.

To recognize Governor Dick is fitting, said Knapp, who pictures the dignified axeman laboring hard before retiring to his rude collier's hut.

"Who knows how many years he spent living on that hill."

Split by an axe

On a clouded afternoon this time of year, the woods of Clarence Schock Memorial Park at Governor Dick are monochromatic and still.

Oak, birch and tulip poplar trunks jut from the earth like tongs. The spring that wells up off Fourth Street at the edge of Mount Gretna supposedly provided Governor Dick with water.

Legend has it that he lived nearby.

The Governor Dick name adhered after the Cornwall Iron Furnace operated by the prominent Grubb and Coleman families ceased operating in 1883.

And it persevered as the little settlement of Mount Gretna evolved into a rustic retreat.

Today, the park and its observation tower hill traversed by Pinch Road - and formerly by a narrow-gauge railroad - are still popularly known as Governor Dick.

Knapp and Gibble have explored the area around the spring, which is walled by mossy stones. People have altered the ground, and the pair found no trace of a dwelling. But many leveled-off patches among the trees mark old burn pits.

Scuff your hiking boot deep enough into the reddish soil at these spots, Knapp said, and you'll often root up charcoal.

Colliers traditionally inhabited log teepees with mud insulation plastered around the base, said Knapp, who has long studied the natural and human history of the Furnace Hills.

Workers would cut two cords a day each during the colder months and, in summer, slowly burn it under leaves and dirt to make fuel for local iron furnaces.

"[The slaves] really played a huge role in our heritage," according to Gibble, who added that rich veins of iron ore and limestone helped make the Furnace Hills the epicenter of Colonial ironmaking.

The Cornwall furnace employed 11 slaves in 1776, according to a Lebanon County history cited by Knapp.

But historical evidence about their lives is sketchy.

"Oftentimes," Gibble said, "the individuals were only identified by their first name."

Governor Dick is likely the 50-year-old man listed in a 1780 registry of slaves in Lancaster County, which in those days included present-day Lebanon County.

He apparently pops up again in a 1796 copy of The Lancaster Journal, in which Rudolph Kelker offered $20 for the recapture of "a Negro Man, called Dick, (alias) Governer Dick."

The ad depicts the fugitive as a big-footed man, 5 feet 10 inches tall, with a bald head and light scorings on his temples. He was a carpenter, proud of his trade but with a "down look" and a horrible scar on his big right toe, "occasioned by its being split with an axe."

According to the squib, he might have "shaped his course" for Harford County, Md., where he lived in his early years.

"I really like the idea that he was a runaway," Knapp said. "I wish him well."

But were the woodcutter and the fugitive really the same man? Did Governor Dick somehow reach freedom at age 66 by heading south?

That isn't as crazy as it sounds, said Leroy Hopkins, a Millersville University scholar of German and black history.

Lancaster County in the 1790s was still a rural fringe area where oppressed people could fade into the woodwork.

But Hopkins said Pennsylvania slaves born before 1780 would have remained slaves for life under the provisional abolition declared by the state that year.

Maryland, meanwhile, had a large free black community, according to Hopkins, who said the marks on Governor Dick's head were likely African tribal signs.

"He had some skills that were marketable," Hopkins added. "That's probably why an owner would go after him."

Still open to question is why Governor Dick stood out among the many slaves and indentured servants of his era.

"This guy must have been pretty important," said Susan Wheeler, a Governor Dick naturalist who will be working with the Lebanon Valley College students.

That people respected him for his wisdom and "sheer force of personality" is a commonly cited explanation, said Hinshaw, the LVC professor.

Another thornier speculation posed by Hinshaw is that Governor Dick was well known because he was bi-racial. "That would be the question I would have about Governor Dick," Hinshaw said. "Who were his parents?"

The answers may or may not be out there.

But the community's bond with Governor Dick is.

It strengthened in 1936 when Mount Joy oilman Clarence Schock began buying the woodland that later would be preserved as Governor Dick.

Still, Knapp said, it would be nice to know where the old forester ended up.

He couldn't have lived at the spring outside Mount Gretna forever.

"It would take a long time to cut Governor Dick's hill by hand," Knapp said, "but eventually you would have to move on."