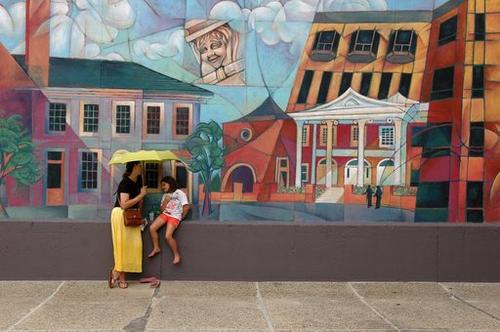 Christine Mohn and her daughter, Maddie, find shelter from a rain shower Thursday after a ceremony that unveiled the new Grant Street mural behind them. Below, mural artist Karen Hunt waits to speak at the unveiling. Dan Marschka / Intelligencer Journal 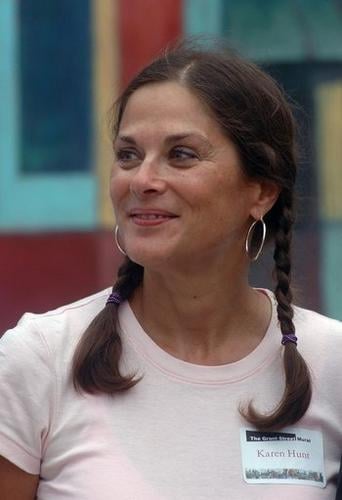 Christine Mohn and her daughter, Maddie, find shelter from a rain shower Thursday after a ceremony that unveiled the new Grant Street mural behind them. Below, mural artist Karen Hunt waits to speak at the unveiling. Dan Marschka / Intelligencer Journal

Now, through a new mural painted on a brick wall facing the Engle-Hambright Davies parking lot just off Grant Street, the cityscape is made whole.

The city is at an exciting point - the bountiful growth of culture in its arts, said artist Karen Hunt, who painted the mural, which is 20 feet high and 88 feet long. Cities and neighborhoods bring people together. (The mural) is an interactive art form with the community.

On Thursday, local and state elected officials and about 100 members of the community attended an unveiling of the mural, which depicts the courthouse, the churches, Demuth Tobacco Shop, Temple Beth-El and the Hamilton Club in a Charles Demuth-inspired montage of city life.

This shows what a neighborhood can do when a neighborhood gets together, Mayor Charlie Smithgall said. I hope everyone enjoys it for a long time to come.

Grant Street Coalition, a volunteer organization founded in 2002 by First Presbyterian, hired Hunt to paint the mural, which took about three months to complete.

The mural is the coalitions most visible beautification project to date. Since its founding, the coalition has worked with local businesses and residents to improve lighting, signage and trash management on Grant Street.

Varion Broadnax, who works at Murray Insurance Associates, 39 N. Duke St., braved a short downpour to attend the unveiling. She and her son, 6-year-old Lamel Yelverton, enjoyed food and childrens activities at a block party on Cherry Street after the ceremony.

I came out in the rain because my (employer) did support (the project), and its something for the kids to do, she said.

State Rep. Mike Sturla helped the coalition acquire a $10,000 Lancaster Investment in a Vibrant Community grant for the $30,000 project.

These pieces of public art ... enhance everyones quality of life, not just those who live and work in this neighborhood, Sturla said.

Other funding came from the state Department of Community and Economic Development, the Florence Starr Taylor Fund for the Visual Arts at the Lancaster County Community Foundation, Grant Street Coalition, local businesses and individual donors.

Hunt submitted two sketches for the coalition and residents of the neighborhood to review. One was a straightforward, nonstylized sketch, and the other was inspired by Demuth, who lived and painted at 100 E. King St.

About 90 percent of residents and business people preferred the latter, which was brighter and more abstract. Hunt used that sketch to design the mural.

Lancaster resident Nan Neureuter, whose son, Kurt, assisted Hunt on her West End Mural at Walnut and Mulberry streets, had nothing but praise for the artist.

Her work is beautiful, very bright and livening to the city.