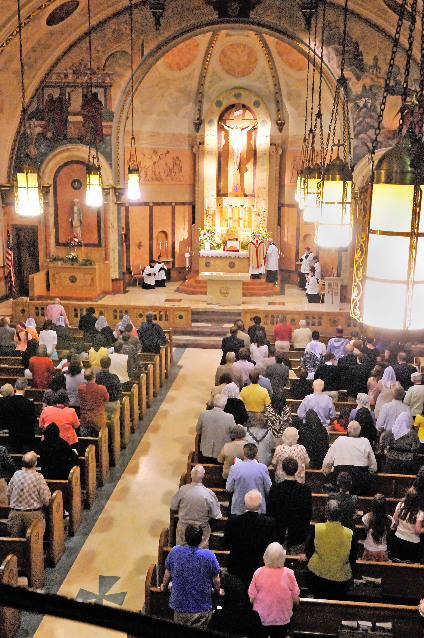 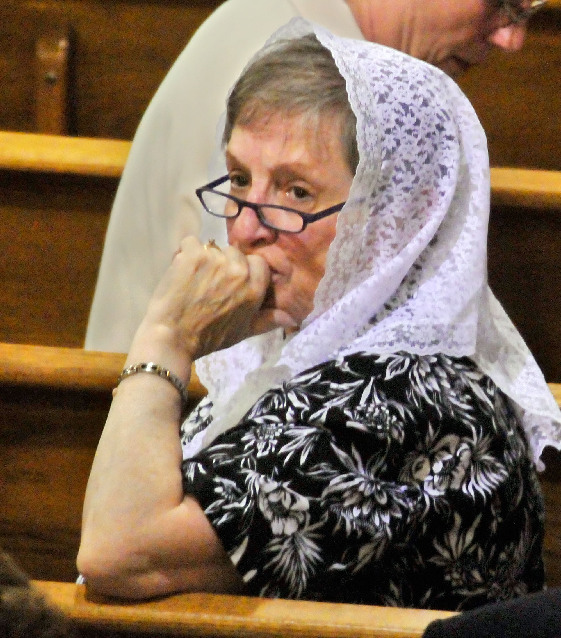 A woman in a chapel veil was one of an estimated 300people to attend the first Latin Mass at St. Anthony of PaduaCatholic Church on Saturday. (Blaine T. Shahan, Sunday News) 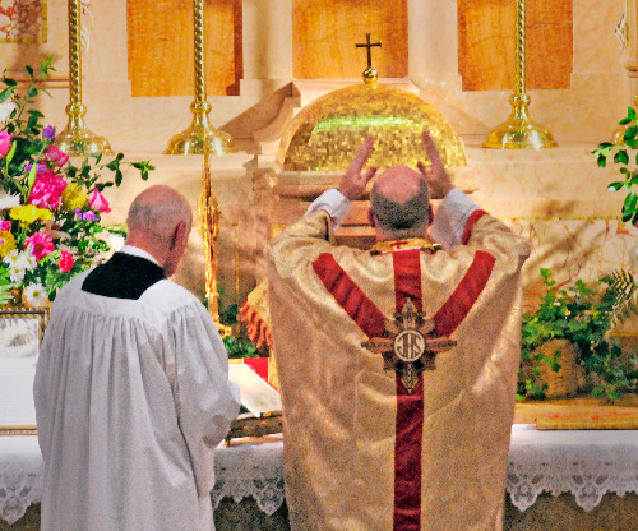 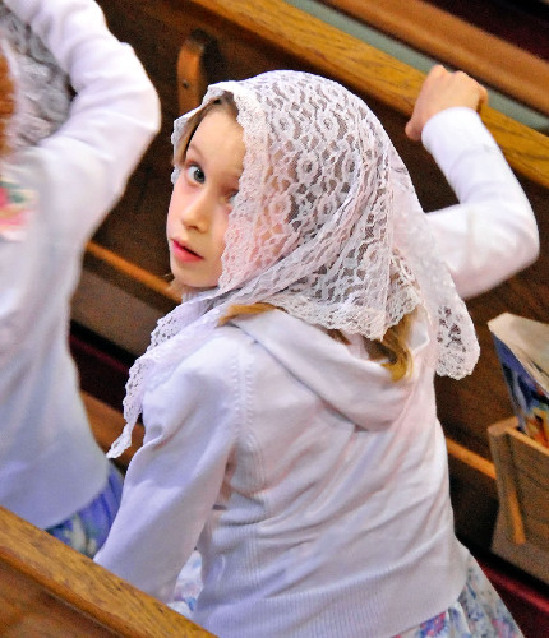 A girlwears a chapel veil in the church. (Blaine T. Shahan, Sunday News)

A woman in a chapel veil was one of an estimated 300people to attend the first Latin Mass at St. Anthony of PaduaCatholic Church on Saturday. (Blaine T. Shahan, Sunday News)

A girlwears a chapel veil in the church. (Blaine T. Shahan, Sunday News)

It's been nearly 40 years since the words of the Latin Mass - The Lord be with you; And with thy spirit; Let us pray - echoed through the sanctuary of St. Anthony of Padua Catholic Church.

"One man said it's like riding a bicycle," the Lancaster woman said.

"This took me back to my childhood," she said.

A congregation estimated at 300 - including many young families with children - filled St. Anthony on East Orange Street for the return of the Latin, or Tridentine, Mass on Saturday, the first of what will be weekly services.

After Pope Benedict XVI gave permission in July for the Latin Mass to be celebrated, a core group of local Catholics has been seeking the approval of the Diocese of Harrisburg to offer the old Mass.

With a priest from the Mater Dei Latin Mass Community in Harrisburg, the Rev. Frank Parrinello, leading the Mass, and a choir singing the Gregorian chants, the Mass was a return to the days when the worldwide Roman Catholic Church spoke to God in a single language.

The Mass also may mark a desire to return to tradition and ritual similar to that being experienced by younger Protestants.

"That," Jack Brons said outside St. Anthony, "was glorious."

But it was also far different from what many younger Catholics know.

The Latin Mass, used by the Catholic Church for nearly 1,500 years, fell out of use after Vatican II in 1965.

In the traditional Mass, the priest faces the altar rather than the congregation. Women are encouraged to cover their heads. During Communion, people kneel at the altar, and the host is placed on their tongues rather than into their hands.

And, of course, the liturgy is mainly in Latin.

During Saturday's high Mass, it wasn't hard to tell those who knew the Latin Mass from those who were experiencing it for the first time.

Women came with veils or hats, or took a chapel veil from the boxes outside the sanctuary to wear. Men and women alike dressed formally.

They sang the Latin responses, knelt and stood on cue.

Others, though, wore T-shirts and shorts - the sort of attire more commonplace in churches today - and needed cues to follow the Mass.

Parrinello encouraged the congregation to return for the Mass, at 5:45 p.m. each Saturday.

Saturday was the feast of Corpus Christi, meaning an extra element to the Mass - a procession with the Blessed Sacrament. That made the Mass "very long," Parrinello warned.

Parrinello, one of the Priestly Fraternity of St. Peter, is the chaplain of the Mater Dei Latin Mass Community.

He also has been helping to train altar servers and musicians for the Mass at St. Anthony.

The chants of the Mass were sung by members of the Te Deum Laudamus Men's Schola, which rehearses at St. Anthony.

Choir members Frank Weatherly and Philip Crnkovich said afterward that they were pleasantly surprised by how many members of the congregation were singing during Mass.

Erick Witteman was one of them. He has been working since the late 1990s to bring the Latin Mass to Lancaster.

He first experienced the traditional Mass, with its Gregorian chant, incense and organ music, at St. Gregory Academy, a boys' academy and seminary in the Scranton diocese.

"That experience was really an epiphany for me," Witteman said.

Witteman was one of the key laypeople lobbying for the Latin Mass here, but former Bishop Nicholas Dattilo was not prepared to give permission. The local Catholics didn't give up; they began meeting monthly to pray the Rosary.

The group sent him 20 letters from about 38 families who were interested in the Latin Mass. More than a month later, the bishop gave approval. St. Anthony was chosen because of the Rev. Daniel Mitzel's willingness to host the Mass.

A matter of tradition

When Liz Lennon heard that the Latin Mass was coming back, she had to attend - even though she's now a member of the parish vestry at St. Thomas Episcopal Church.

"I was surprised at how much Latin I remembered," she said. "... To be here for Corpus Christi - that took me back to the days of white dresses and processions and lilies."

It's a far cry from services in many Protestant churches today, especially those with contemporary worship.

But among younger Protestants, the trend today is toward recovering the rituals and worship of the primitive church - "ancient-future worship" - and the Tridentine Mass may serve a similar function for Catholics.

"I think it's the tradition - the heart of who we are, really," Lennon said. "That's what we older Catholics came from.

"I guess I'm a sucker for ritual."

Jack Brons just returned from a trip to Fatima, Portugal, during which the Latin Mass was celebrated regularly.

"We're happy to have it here in Lancaster," he said.

Rosie Gross remembers the days when Catholics spoke with "one voice," and loved being part of that again.

"You feel the presence of God," she said. "The [Latin] Mass is about worshiping God."

Helen Colwell Adams is a Sunday News staff writer. E-mail her at hcolwell@lnpnews.com, or phone 291-4962.