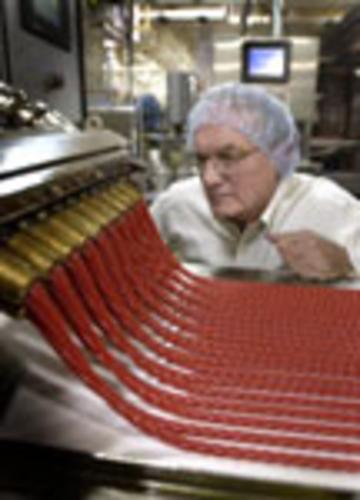 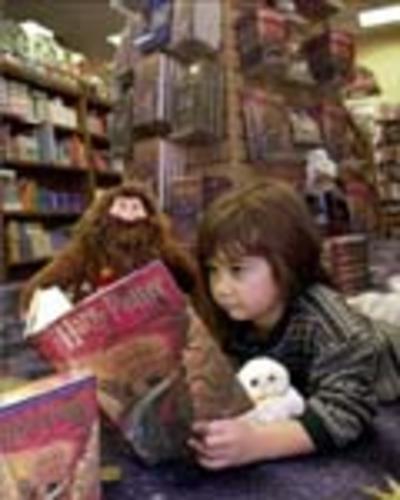 ***image1:left***Above a passageway hangs a sign that reads, "Through these doors pass the world's greatest candymakers."

Their job: to stock the nation with Twizzlers.

Only the black candy, made with licorice-root extract and anise oil, is true licorice. The rest is "licorice-type candy."

Twizzlers are low in fat.

Debra Messing, the star of the NBC hit comedy "Will & Grace," is a die-hard Twizzlers fan. In fact, she tries to work Twizzlers into the show's script, company officials say. Just two weeks ago, the company sent her a case of her favorite strawberry-flavored twists.

Strawberry twists are the most popular product, making up 70 percent of the company's production.

The workers who make Twizzlers are treated to two complimentary pounds of the candy each week.

Next to popcorn, Twizzlers are the second-most popular movie theater snack.

So how are they made? Here's a look.

It's late morning at Y&S Candies Inc., a 290,000-square-foot plant in a business park in East Hempfield Township, near Rohrerstown.

The company, owned by Hershey Foods Corp., is the largest licorice-type candymaker in the world.

Twizzlers are the top-selling licorice-type candy in the United States. In pounds, they're the fourth best selling candy in the country.

On an average day, Y&S cooks up more than 500,000 pounds of candy and ships between 20 and 24 tractor-trailers full of the finished product.

Every day, thousands of motorists on Running Pump Road drive past the factory, which is lined with neatly trimmed shrubs outside. Only a 6-foot-wide red Twizzlers sign anchored in the lawn advertises the famous product.

When the wind blows in just the right direction, the fruity aroma wafts from the factory into the open windows of Route 30 travelers a few miles away. Neighbors, too, often catch a whiff of the treats cooking up the road.

But most will never set foot inside the factory, where more than 700 employees work around the clock, nearly six days a week, to keep up with the demand for the treats.

The plant isn't open for public tours and Twizzlers aren't sold there.

Here in this cavernous plant, rotating nozzles shaped like five-pointed stars squeeze out wet, gooey candy , 20 rows of warm Twizzlers at a time.

"With the rotating nozzle, you get the twisted look," explains Peter Sydorko, the Y&S plant manager. He moves quickly through the bustling plant.

Thousands of rows of shaped Twizzlers lie on boards in 7-foot-tall racks. The racks will roll through drying tunnels, like vehicles through a car wash.

"Depending on the type of candy, it can take anywhere from four to 18 hours to dry," Sydorko says.

Workers in blue or maroon uniforms whiz around the plant on motorized carts, delivering cardboard boxes and tooting their horns.

Other employees , "feeder-packers" , use their hands, repeatedly guiding Twizzlers into wrappers on a conveyor belt. The Beatles hit "Can't Buy Me Love" blares over the noise.

Another conveyor belt, moving a whopping 300 red bars a minute, automatically inspects and weighs the 2-ounce Twizzler packages. A bar is made of five strands of Twizzlers. The packages, containing two five-strand bars, are sold in convenience stores and vending machines.

Some areas of this vast building are off-limits to anyone except trusted employees.

OK. This is candy. Not nuclear weapons.

Competition is tough, he says matter-of-factly, and Y&S staff want to protect the technology they have developed.

But in recent years, Y&S has also added new Twizzler varieties and flavors.

There have been lemonade and peach Pull-n-Peel Twizzlers, which resemble entwined strands of cooked spaghetti.

Mysteriously, he's not at liberty to reveal them quite yet.

Y&S Candies has been whipping up Twizzlers in Lancaster County for 25 years.

But the confectionery's history goes back much further.

Y&S Candies, founded in Brooklyn in 1845, is the oldest licorice company in the nation. It was originally established as "Young and Smylie," named after its founders.

It merged with two small firms and changed its name to the National Licorice Company in 1902.

In 1968, the company changed its name again , this time to Y&S Candies.

Since then, the business has undergone four expansion projects that have nearly tripled the size of the original building.

But throughout the years, the Twizzler formula has remained the same.

"The process has changed, but the ingredients haven't," says Douglas Hartman, director of manufacturing for Hershey Chocolate North America.

But now Y&S uses mechanical sensors and controls, metal detectors and robots to speed up the operation, Hartman says.

"Computer technology has made the biggest advancement," says Hartman, who joined Y&S in 1967.

Just look at Fred, Wilma, Pebbles and Bam-Bam, who sit in metal cages in one section of the plant.

The metal robots, affectionately named by company staff after characters on the cartoon show "The Flintstones," were first installed in the 1980s. They look like small cranes, with suction cups on the tips. They're programmed to attach their vacuum heads to cases of Twizzlers, then stack them onto wooden pallets.

So why are Twizzlers , the nation's best-selling licorice , so darn popular after all these years?

"We've got a good, consistent product with a good flavor and it's fun to eat," Hartman says.

And Twizzlers have been around for generations.

"Not only will kids eat it, but their parents will buy it at the store. It's also something you've grown up with," Hartman says.