The York County Republican Committee has censured Republican U.S. Sen. Pat Toomey over his vote to convict former President Donald Trump last week, calling the reliable conservative "out of touch with the core beliefs of the people of Pennsylvania."

"Given his recent support of the second unconstitutional impeachment effort against a president who is no longer in office the York County Republican Committee has reached the limits of its frustration.”

The Republican committee passed the resolution by voice vote at a meeting on Saturday.

Toomey, who is not running for reelection, said he voted to convict Trump of inciting the Jan. 6 attack on the U.S. Capitol based on the “accumulation of the weight of all the evidence.” He is among only seven Republicans in the Senate to vote for Trump's conviction.

“It’s important as a party to be able to distinguish ... the terrific successes of this administration, the fact that the president did stand up to and against some bad policies and some bad trends,” Toomey said. “Those things can be true, and it can also be true that his behavior after the election became completely unacceptable.

“I hope that we get to the point where we can come together as a party and recognize those things,” Toomey added.

The York County Republican Committee took no action against two members of the U.S. House who represent the county - Scott Perry and Lloyd Smucker - for supporting Trump in his anti-democratic effort to overturn the election of Joe Biden as president. Following the insurrection of Jan. 6, Smucker and Perry voted to reject the state-certified results of the Nov. 3 election.

Though a majority of senators voted to convict Trump on Saturday, the former president was acquitted because the result was short of the two-thirds majority needed to find him guilty.

Nonetheless, bipartisan support appears to be growing for an independent Sept. 11-style commission into the deadly insurrection that took place at the U.S. Capitol.

Meantime, Trump is preparing for the next phase of his post-presidency life. Feeling emboldened by the trial's outcome, he is expected to reemerge from a self-imposed hibernation at his club in Palm Beach, Florida, and is eyeing ways to reassert his power.

Read the full resolution censuring Toomey below. The measure is a formal expression of dissatisfaction with the lawmaker, whose conservative bona fides have made him population with Republican voters over the years, but has no practical impact on his tenure in the Senate. 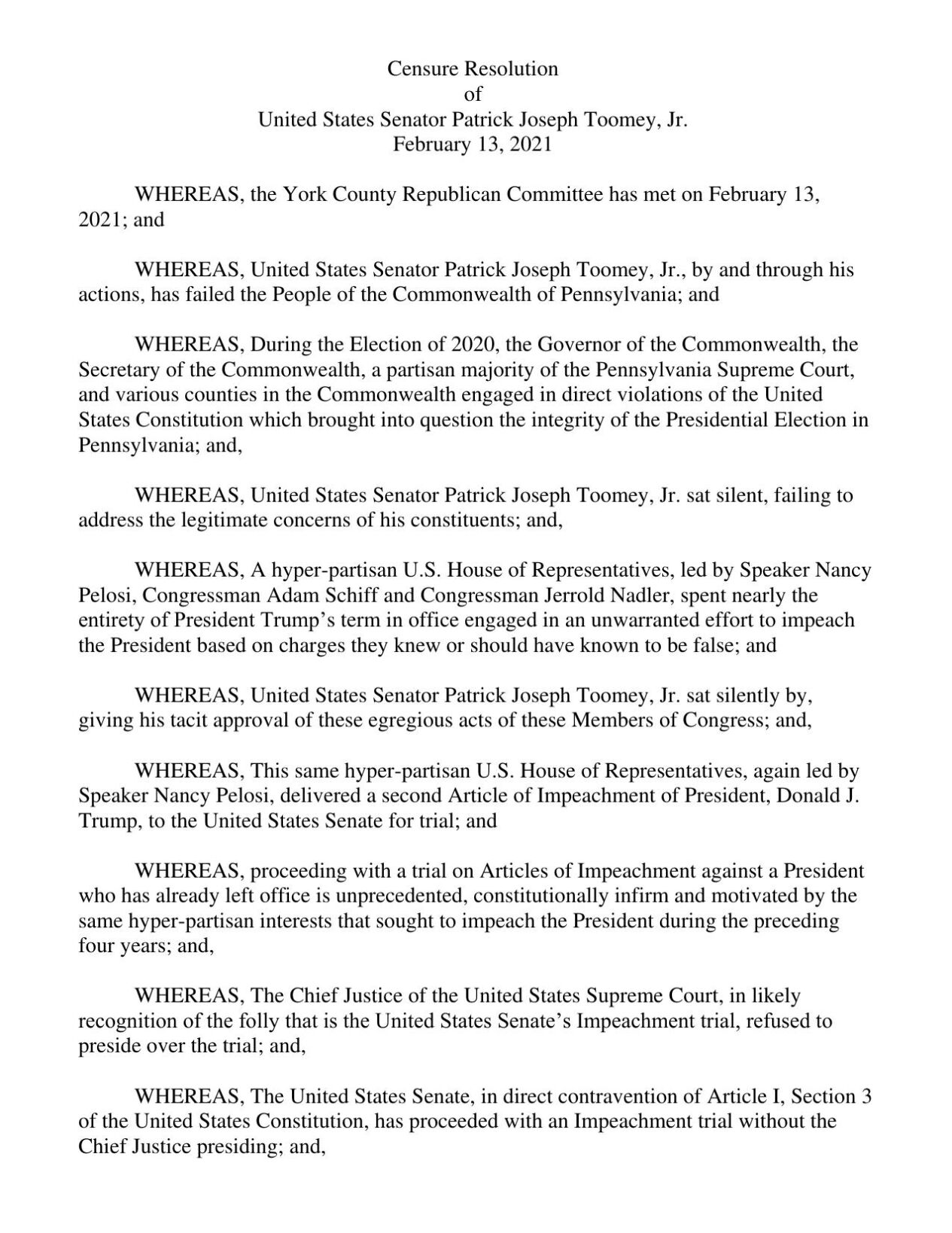 On Saturday, the United States Senate voted to acquit former President Donald Trump for his …

Editor's note: This article has been updated with additional quotes from local officials.

Delay in census data could put transparency in Pa.’s redistricting process at risk

This article is part of a yearlong reporting project focused on redistricting and gerrymandering in Pennsylvania. It is made possible by the s…

The Republican Committee of Lancaster County did not debate or vote on a proposed resolution to censure U.S. Sen. Pat Toomey for his vote to f…