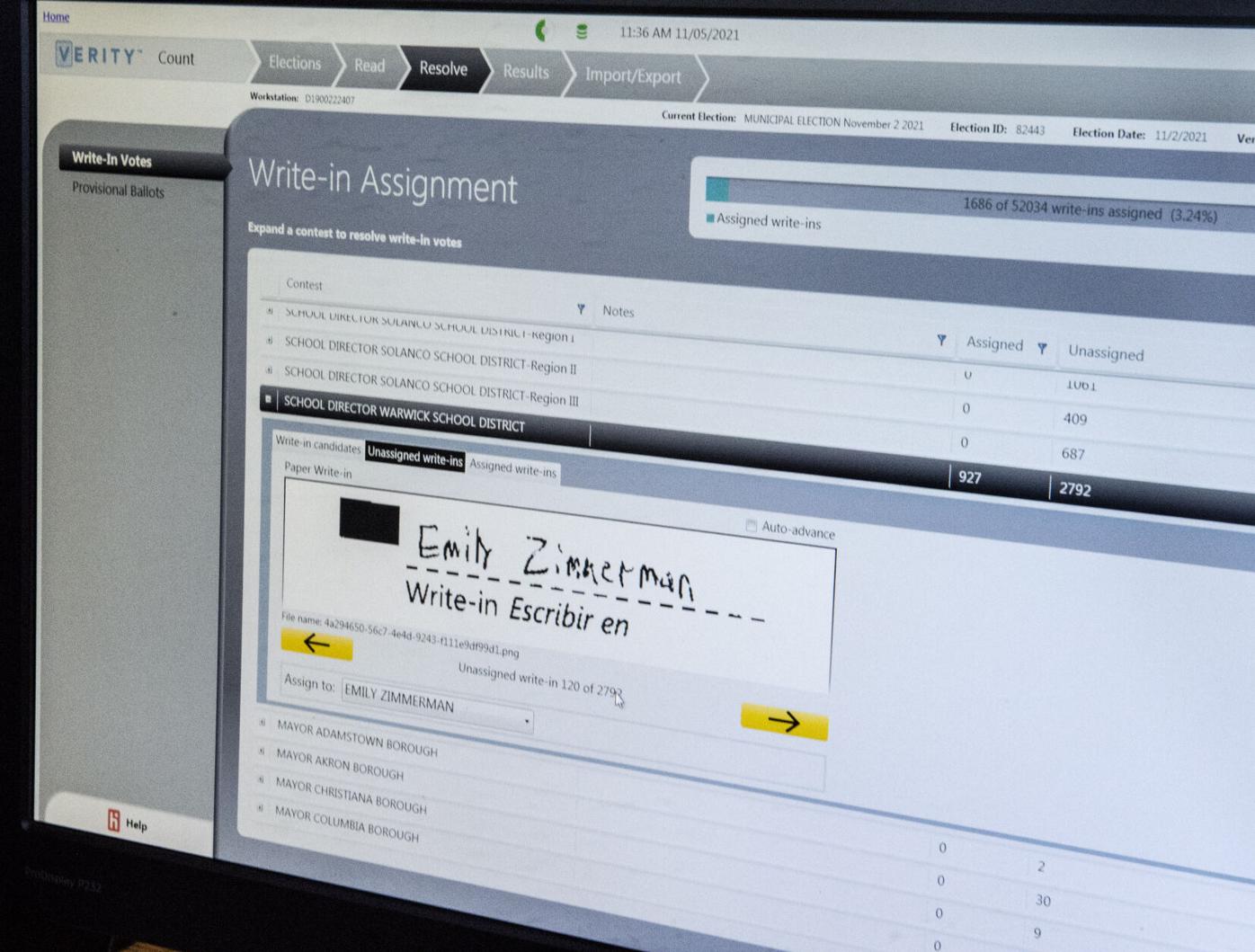 This is a view of the computer screen Melissa Shaffer, clerical specialist at Lancaster County Office of Voter Registration, uses to count write-in votes for Warwick school board Friday, Nov. 5, 2021. 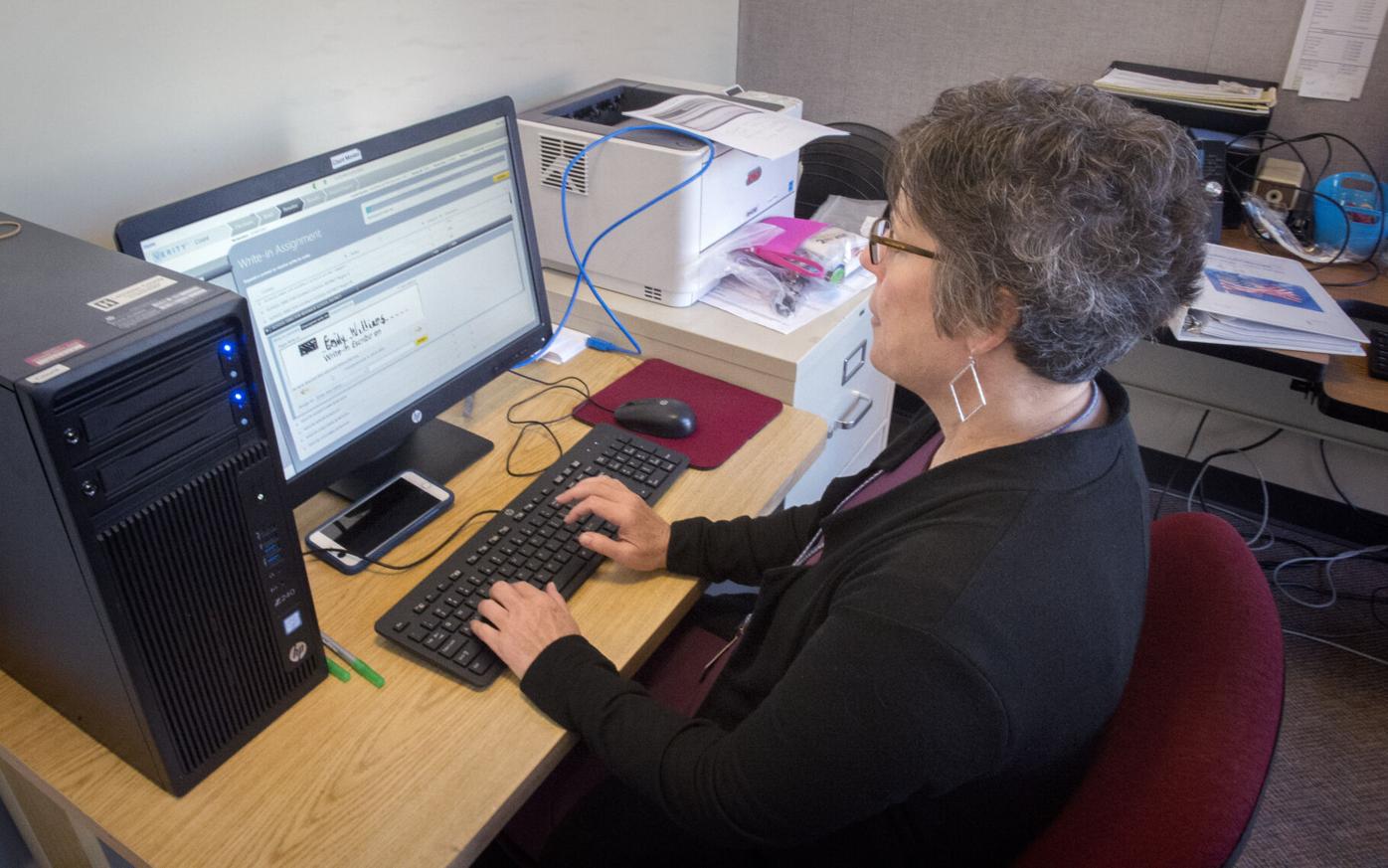 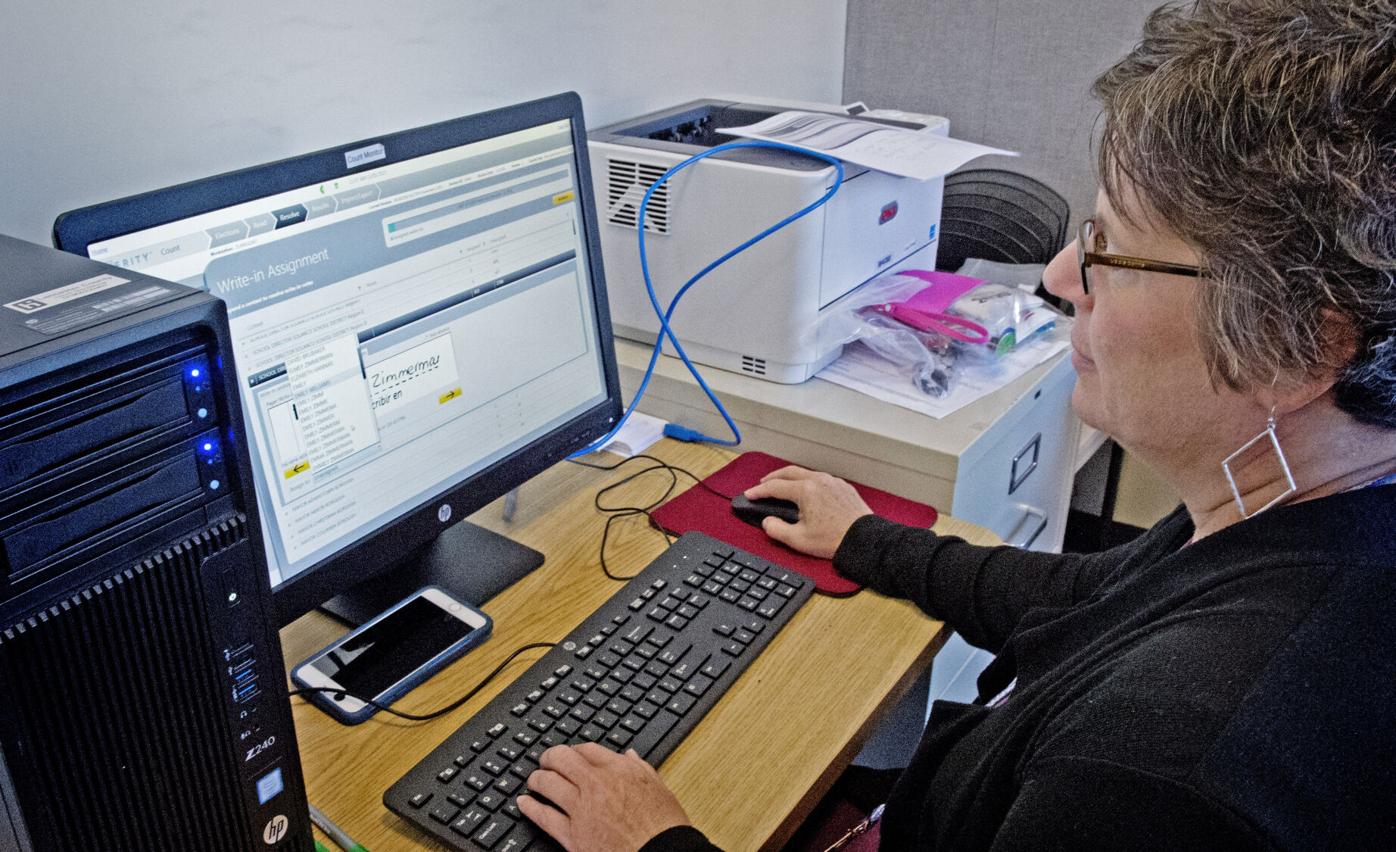 This is a view of the computer screen Melissa Shaffer, clerical specialist at Lancaster County Office of Voter Registration, uses to count write-in votes for Warwick school board Friday, Nov. 5, 2021.

Write-in candidates for a handful of school board seats may have defeated candidates whose names were on the Nov. 2 ballot, according to results posted by the Lancaster County elections office.

As of Monday afternoon, county workers had counted fewer than a quarter of the record-breaking 52,308 write-in votes cast in the municipal election, as they proceeded through the backlog race by race. So far, results in three school director races – Solanco, Warwick and Manheim Central – show write-in candidates leading or potentially leading.

At issue in the vote counting in several races is improper or incomplete spellings of write-in candidates’ names. To have those votes officially added to their total, the write-in candidates must petition the court within five days of the results of their race being finalized.

Emily Zimmerman, a write-in candidate for the Warwick school board, was on track to unseat the board’s current president, Michael Landis.

Landis had been criticized by parents who opposed COVID-19 mitigation mandates like mask-wearing. Approximately 566 people signed a petition over the last two months calling for Landis to resign for enforcing mask-wearing and also claimed Landis “allowed vulgar books containing themes of sexual promiscuity, underage drinking, illicit drug abuse, and anti-police rhetoric into the curriculum for 9th graders” and “Books on gender identity issues have been made available to children as early as kindergarten.”

Landis, a Republican, was endorsed by the Republican Committee of Lancaster County. Zimmerman didn’t launch her write-in campaign until mid-September, according to her Facebook page. She presented herself as a “true conservative” and campaigned on a promise to give parents the greater say in how their children are educated and what rules they must follow in the classroom.

Zimmerman received 2,037 write-in votes with her name spelled correctly. There are approximately 1,300 additional votes for other versions of her name, with 621 of them for “Emily Zimmerma.” While some of those votes correctly spelled her name, the county can only process the letters that appear within the ballot’s write-in box. If any letter appeared over the edge of that box, the county could not record it and is required by law to register it exactly as it is written.

If Zimmerman petitions the court and a judge approves the additional name spellings, she would receive more than 3,300 votes, enough to defeat Landis, who received 3,286 votes.

The county finished counting the write-in votes in Warwick on Monday. Zimmerman will need to petition within the next five days to collect these additional votes.

Jennifer Walker looks to have won a spot on the Manheim Central school board after the county finished counting write-in votes for this race over the weekend.

Of the 2,905 write-in votes tallied by the county, approximately 2,795 appear to be intended for Jennifer Walker.

Walker advertised herself alongside the other GOP candidates on the ballot and said she would push more conservative policies, according to her campaign Facebook.

Approximately 2,106 people spelled her name correctly on their ballot, meaning Walker will need to petition the court to have the remaining 800 votes added to her tally. If a judge approves it, Walker would win a seat on the Manheim Central school board over cross-filed candidate Linda Williams, who got 2,536 votes.

Justin Wimer looks like he will win over long-time school board member and board president Paul Plechner to represent Solanco’s Region I on the school board.

Plechner, who appeared on the ballot, received 754 votes. Wimer, a local businessman and Solanco parent, received at least 963 write-in votes, not including any of the potential misspellings of his name.

Wimer ran his write-in campaign on “parental choice” and “transparency,” according to his Facebook.

Two write-in candidates in Paradise Township fell short in their bids to unseat two incumbents, according to final results from the county.

Adam Bills, chair of the Paradise Township Board of Supervisors and area chair for the local GOP committee, said the township’s proposal to consolidate emergency services was the issue that sparked the write-in challenges.

Bills said the write-in campaigns of Nicholas Summers and David Lapp were backed by Paradise Fire Company, which opposed the consolidation.

The county will begin counting write-in votes for the Cocalico school board race on Tuesday and post the remaining results for Solanco, Miller said.

Cocalico write-in candidate Rachel Davis, who campaigned to be a “fierce guardian” against governmental overreach, could win given there are 3,680 write-in votes to be counted. Treva Bollinger, an endorsed Republican, has the lowest number of votes in the race right now, with 1,847 votes.

The county said its next priority for counting write-ins will be the Penn Manor school board race. A number of parents ran a write-in campaign for the opposite reason as parents in other districts: These parents were hoping to support the board’s efforts to control the pandemic and the district’s curriculum.

There are 7,992 write-in votes for this race that the county will need to process before the outcome is determined. Since each name written-in by a voter counts as one of those 7,992 votes, it’s unlikely that any one candidate will be able to overtake the lowest-performing candidate on Tuesday’s ballot, who received 5,734 votes.

Carter Walker contributed to this report.

Editor's note: A previous version of this story incorrectly stated which fire company was backing write-in candidates for supervisor in Paradise Township. It was Paradise Fire Company.

The Lancaster GOP is celebrating its big wins across the county in Tuesday's election. Will it last? [analysis]

Lancaster gets through 6% of 'unprecedented' number of write-ins Friday, expects results for Warwick on Monday

The Lancaster County Board of Elections on Friday processed approximately 6% of the 52,308 w…

Lancaster County Board of Elections staff on Friday will begin processing 52,308 write-in vo…

Back to mask-optional in 2022? Many Lancaster County school officials welcome it

Many Lancaster County school officials expressed relief after Democratic Gov. Tom Wolf announced Monday that he expects to hand decision-making regarding masks back to local school boards in January 2022.

Cocalico’s four-seat school director race is tightening up as the counting of write-in votes from the Nov. 2 municipal election continues.

The write-in candidates running for seats on the Penn Manor and Cocalico school boards will come up short, according to Lancaster County’s ele…

Lancaster continues through write-in votes, as it now prepares for the statewide Commonwealth Court recount

County gets through 50% of write-in votes, prepares for next week's Commonwealth Court recount

The Lancaster County Board of Elections will begin recounting votes cast in a narrowly decided state appellate court race starting next Wednesday.

Lancaster to start its state-ordered recount for Commonwealth Court today; here’s when write-in winners could be decided

Lancaster County’s elections office today will begin a state-ordered recount of votes cast in the race for a seat on the Commonwealth Court.

Lancaster County in 'homestretch' of finalizing Nov. 2 election; Winners to be decided in tie races Friday

Lancaster County Board of Elections workers are in the “homestretch” of counting the record-breaking 52,308 write-in votes cast in the Nov. 2 …