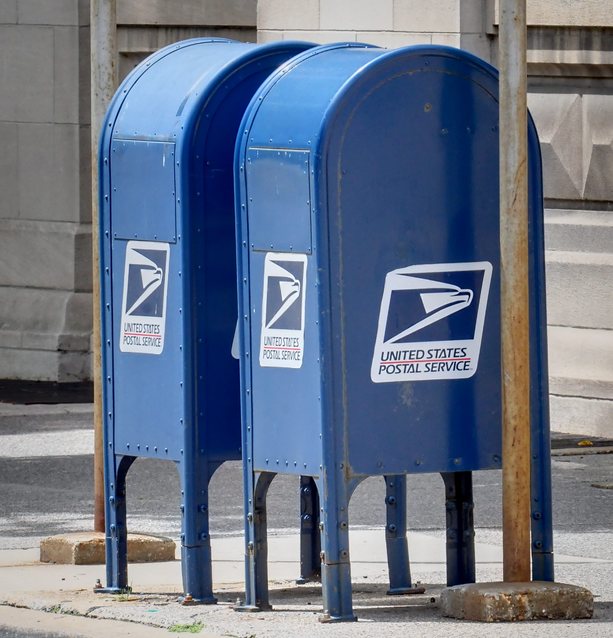 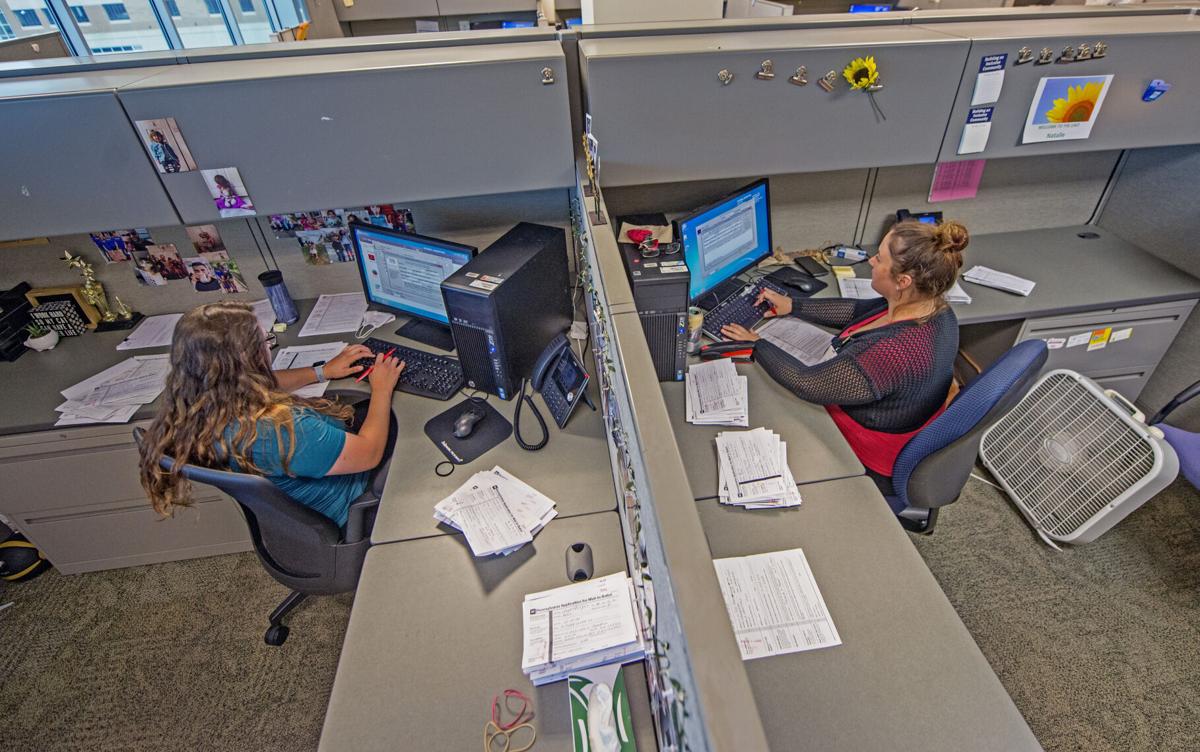 Valerie Sukolowsky, left, and Ryan Asquith process applications for mail in ballots at the Lancaster County offices 150 N. Queen St. in Lancaster city Wednesday, Sept. 9, 2020. Sukolowsky and Asquith are some of the temporary employees who are working the county's voter registration office. 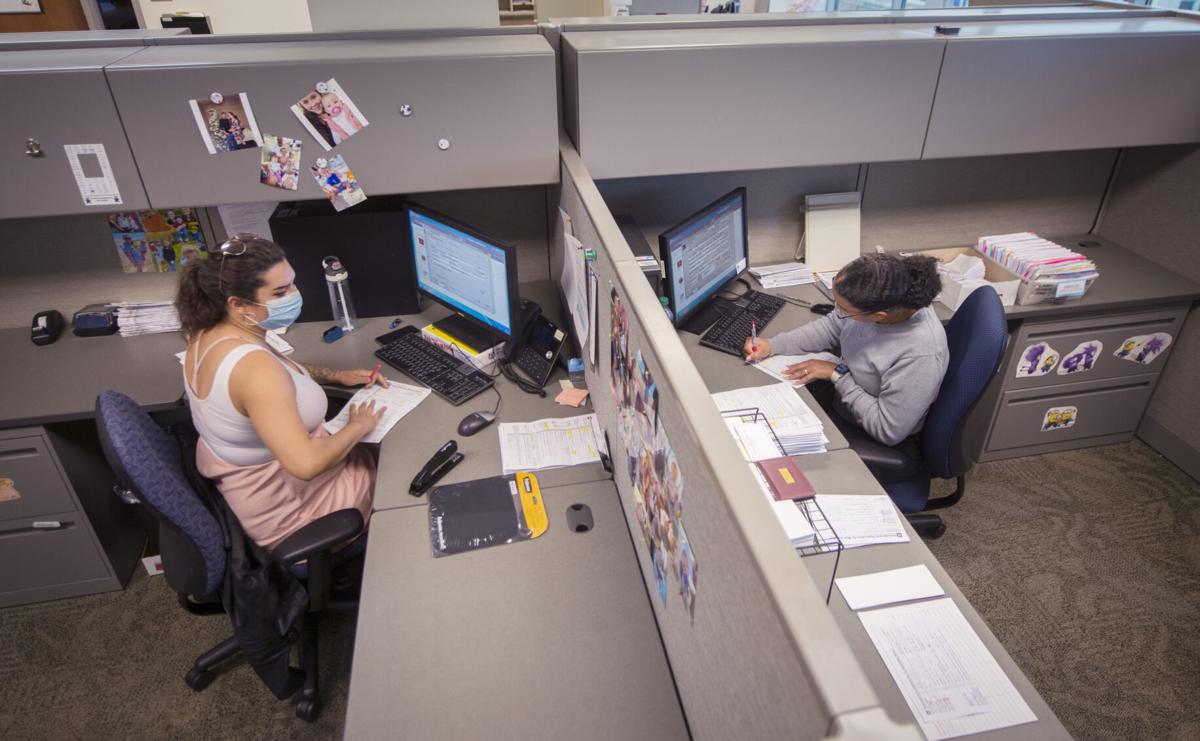 Ninja Hadgu, left, and Deliyah Grimes process applications for mail in ballots at the Lancaster County offices 150 N. Queen St. in Lancaster city Wednesday, Sept. 9, 2020. Hadgu and Grimes are some of the temporary employees who are working the county's voter registration office. 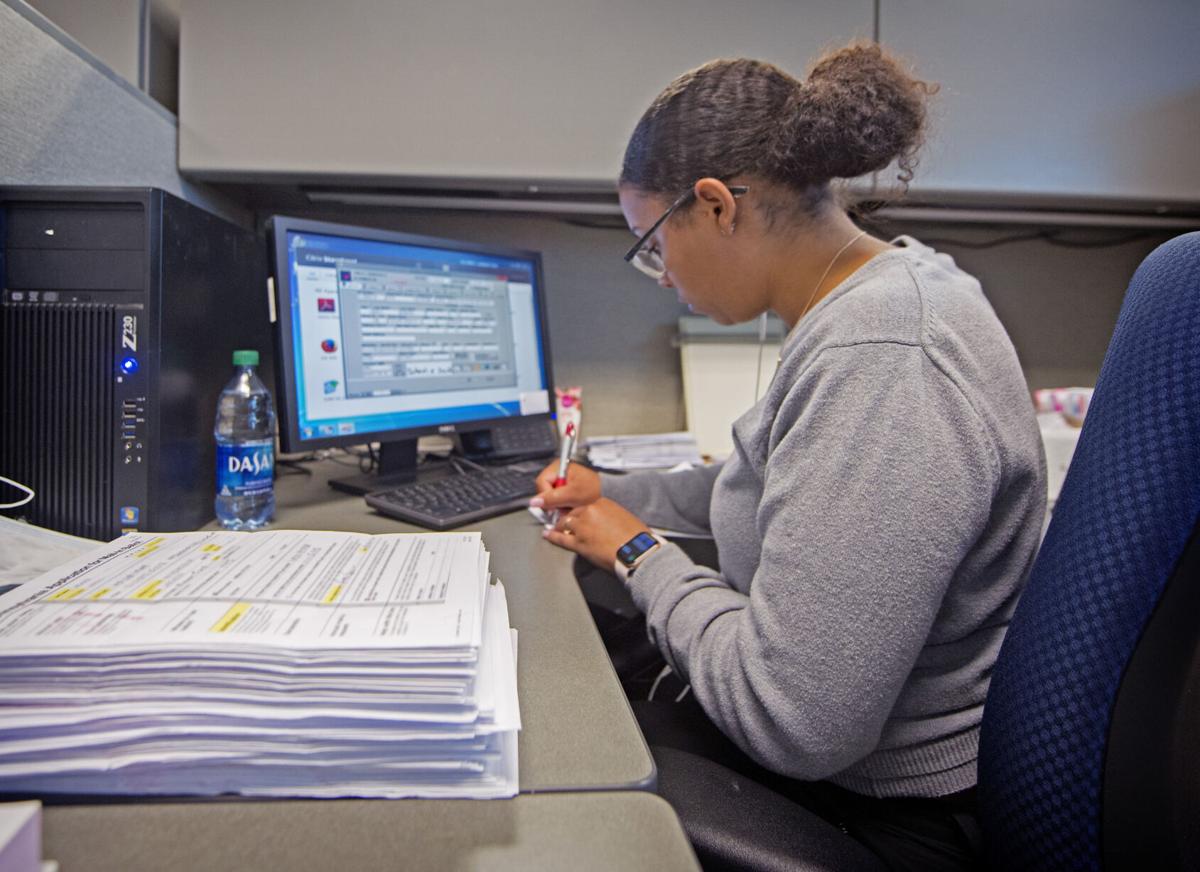 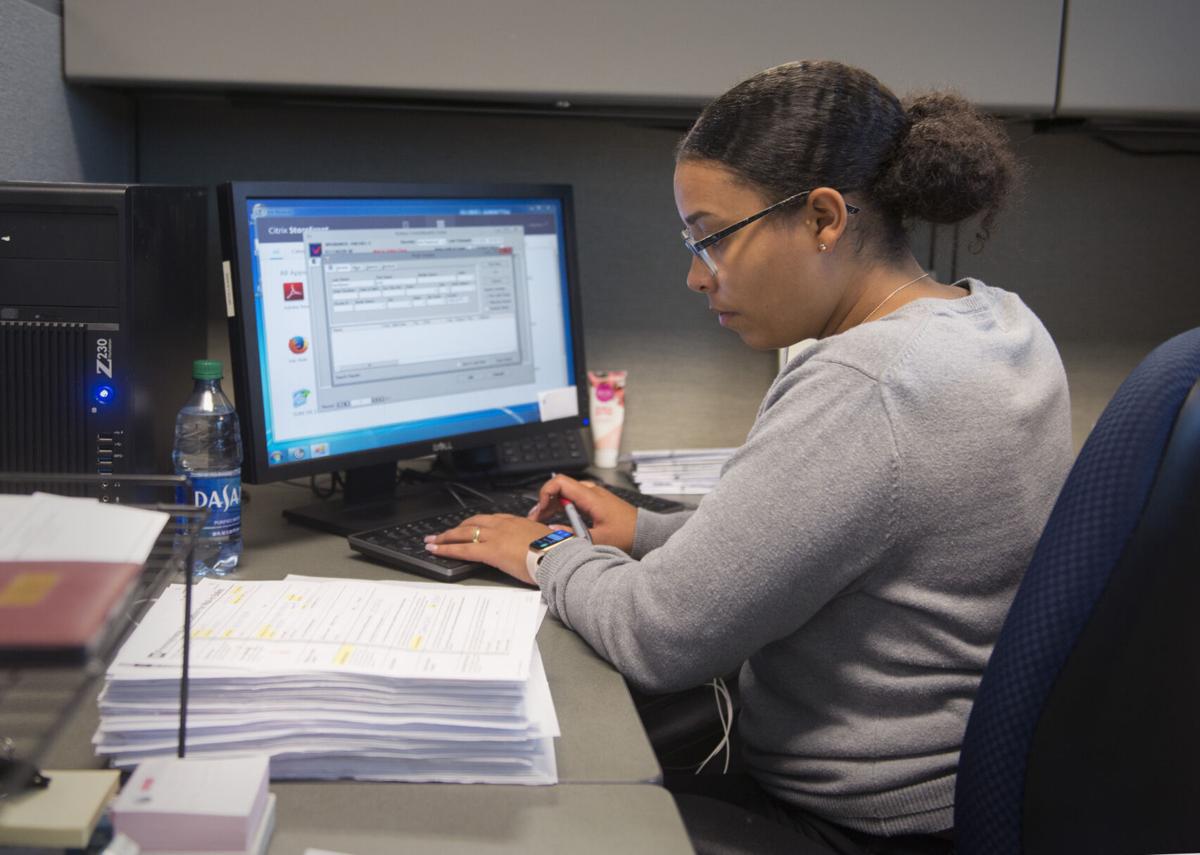 Valerie Sukolowsky, left, and Ryan Asquith process applications for mail in ballots at the Lancaster County offices 150 N. Queen St. in Lancaster city Wednesday, Sept. 9, 2020. Sukolowsky and Asquith are some of the temporary employees who are working the county's voter registration office.

Ninja Hadgu, left, and Deliyah Grimes process applications for mail in ballots at the Lancaster County offices 150 N. Queen St. in Lancaster city Wednesday, Sept. 9, 2020. Hadgu and Grimes are some of the temporary employees who are working the county's voter registration office.

An LNP | LancasterOnline experiment has confirmed what election and postal officials have been advising:

Voters requesting and filing mail ballots should not procrastinate if they want to be sure their vote is received in time to be counted in the Nov. 3 presidential election.

We all have to prepare, now, to vote in the Nov. 3 election — Pa. lawmakers ought to act soon, too [editorial]

To test the local mail delivery system, we recently sent 150 “mock ballots” from 50 locations around the county to a post office box in the same downtown Lancaster post office where official mail ballots will be received by county election officials.

All of our envelopes arrived, and 97% were delivered within three days. But one envelope took four days to arrive, one took six days and two others took a full week. And of course, our experience in late August is no guarantee of ballot delivery times in the final weeks before the election as mail volume surges.

(Use the interactive map below to see the average mail delivery time for your area. Story continues below)

Under current law, voters can apply for mail ballots up until 5 p.m. on Tuesday, Oct. 27, and completed ballots must be received by the county by 8 p.m. on election day, one week later.

Here’s why that time frame could be a problem:

Counties are required to process mail ballot applications and send them out within two days. Add another two or three days for postal delivery to the voter, and two or three days to mail it back, and the chances of missing the Nov. 3 deadline could be significant for those requesting ballots shortly before the deadline.

Smucker: 'I will not participate in forums hosted by LNP' [Column]

“If you’re applying the last day, there’s just no way we can guarantee it will get (mailed back) in time,” said Lancaster County Commissioner Ray D’Agostino, who chairs the county’s election board.

The U.S. Postal Service, meanwhile, says it will be committing additional resources to prevent delivery delays of election mail. But in a recent postcard mailed to its customers it advises, “We recommend you mail your ballot at least 7 days before Election Day.”

As a result of the tight time frame, county officials are encouraging any mail voters concerned about postal delivery times to hand deliver their ballots to the elections office at 150 N. Queen St. in downtown Lancaster. On Election Day, the office will be open until 8 p.m. to receive hand-delivered mail ballots.

A mail voter can only deliver his or her own ballot to the office, and the county is not currently planning to have a “drop box” at the building’s entrance as it did in the spring primary, county officials said.

In the primary, 305 mail-in ballots and 140 absentee ballots arrived too late to be counted in Lancaster County, according to election officials.

Getting ballots to voters

Due to the coronavirus pandemic, 2020 is expected to be a record year for mail voting locally and across the nation. As of Sept. 9, nearly 64,000 mail ballot applications had been processed in Lancaster County, according to local election officials, who are planning for up to 125,000 such applications from among the county’s 336,000 registered voters.

Mail ballots will be sent out the week of Sept. 28, and voters should begin receiving them on Oct. 2 and 3. Additional requests will continue to be processed as they are received, up until Oct. 27.

The issue of mail delivery times during the election gained attention last month when Postmaster General Louis DeJoy notified the state that the postal service might not be able to deliver all ballots in time.

In response, proposals are pending in Pennsylvania to either allow more time for mailed ballots to arrive, or to set an earlier deadline for applying for mail ballots.

After DeJoy’s warning, Pennsylvania Secretary of State Kathy Boockvar petitioned the state Supreme Court to allow mail ballots to be accepted if they arrive late, as long as they are postmarked by Election Day.

Wanda Murren, a department spokesperson, didn’t say whether there was any update on Boockvar’s request when reached for comment. But she noted that election mail is treated differently than regular first-class mail. She said it is “handled as expeditiously as possible,” although she could not say exactly what the delivery time difference is.

Another proposal to address the ballot delivery time crunch involves setting an earlier deadline to apply for mail ballots. House bill 2626, which is currently in the Senate, would move up the mail ballot application deadline by eight days, to Oct. 19.

That would give voters less time to apply for a mail ballot but would give the postal service a bigger, two-week window to deliver mail ballots to last-minute applicants, and for mail voters to return them to elections offices by Nov. 3.

But Gov. Tom Wolf has vowed to veto the bill because it would also eliminate drop boxes for mail-in ballots and does not allow counties enough time to precanvass (open envelopes but not count the mail-in ballots) before election day.

D’Agostino, the chair of the Lancaster County elections board, said he would prefer the latter of those two options.

“The election is on Nov. 3, the votes should be in on Nov. 3,” D’Agostino said, and the winner should be known as soon as possible. “If you’re waiting on a good number of ballots to come in a few days after the election, that could be a problem.”

He said the county’s goal is to have all ballots — with the exception of those coming from overseas  —counted by Nov. 4.

D’Agostino also questioned what would happen if there was no postmark on a ballot envelope, but Murren said that even though return envelopes will be prepaid, they will still have postmarks. And indeed, the business reply envelopes LNP used for its mail test all arrived with postmarks.

Diane Topakian, chair of the Lancaster County Democratic Committee, said she was happy to see that the majority of mock ballots in LNP’s experiment were returned quickly, but she still urged that voters get their ballots in early.

“USPS is trusted service and should keep it the way it is and funded,” she said.

Kirk Radanovic, chair of the Republican Committee of Lancaster County, said that a narrative surrounding the post office had been created by the left in an effort to scare and disenfranchise voters.

“The LNP experiment results are encouraging and crucial to ensuring that voters are confident in the security of their ballots,” Radanovic said.

Both parties agreed on one thing, however: Apply for your ballot early and send it in as soon as possible.

The Labor Day weekend marks the start of campaign season. Make sure you're prepared for Nov. 3. [editorial]

Lancaster County elections officials, who are under the wire to start printing ballots for t…

How we conducted our mail experiment

We used first-class business reply envelopes — the same type of postage that the Lancaster County Board of Elections will use for mail ballots. And our envelopes were sent to the LNP post office box at the downtown Lancaster Post Office at 48-50 W. Chestnut St. — the same post office where the board of elections will receive mail-in ballots.

Each day, on Aug. 24, 25 and 26 a team of six reporters deposited 50 numbered envelopes in collection boxes in 50 out of the county’s 60 municipalities.

Envelopes were sent at a mix of times throughout the day, and envelopes dropped after a box’s last listed pickup time were counted as being mailed the following day.

Starting on Aug. 25, we checked our P.O. box daily until the final envelopes were received back on Sept. 2. Each day, LNP recorded the envelopes’ numbers to track how long it took to be returned from a particular location.

On average, the delivery time was 2.6 days.

Of the 150 envelopes, 146 were delivered in one to three days, the postal service’s estimate for first-class mail. One envelope took four days, one took six days and two took seven days to be delivered.

Those sent on Wednesday took an average of 3.0 days. The three envelopes that took six or seven days to arrive all were mailed on this day.

Applying for a mail-in ballot

The quickest way to apply for a mail ballot is online, at votespa.com. But applications can also be picked up and filled out in person at the Lancaster County Elections Office, or by writing to the office, at 150 N. Queen St.,  Suite 117, Lancaster, PA 17603.

Here are more than 50 apple varieties grown throughout Lancaster County.