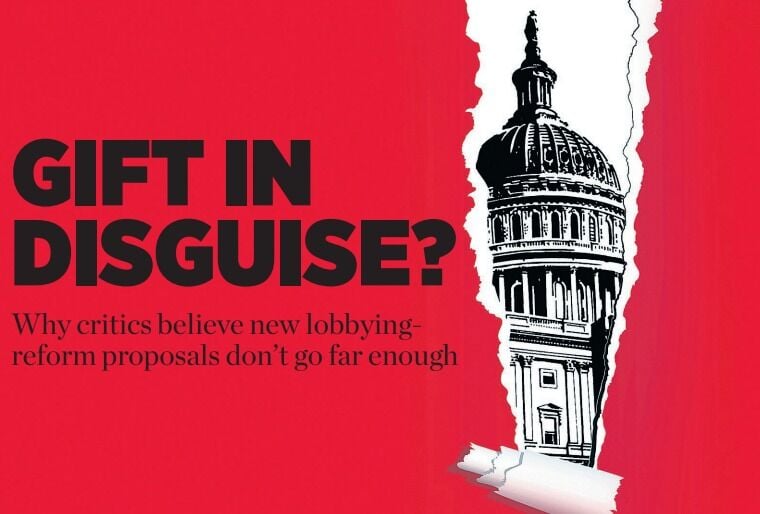 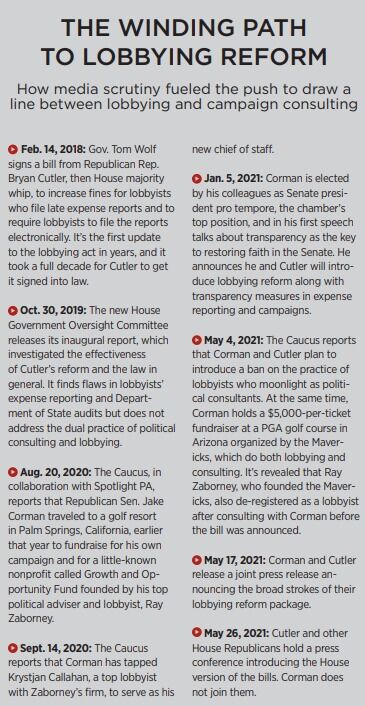 Lobbyists in Harrisburg and throughout Pennsylvania will soon have to disclose any financial interest they have in organizations for which they lobby, the first step in what the General Assembly’s top two Republicans describe as a comprehensive lobbying reform push.

Lawmakers quietly inserted the requirement into a budget-related bill in late June. Gov. Tom Wolf allowed the bill to pass into law without his signature on July 9, kicking off a 90-day timeline for the Department of State to set guidelines and then for lobbyists to file their first reports.

House Republicans introduced the idea just a few weeks earlier as one in a 12-bill package pitched as the most significant changes to Pennsylvania’s lobbying law in 15 years.

The bills, while still not as strict as some good-government advocates might like, are intended to fundamentally change some lobbying activities and require more disclosure for what has been an opaque industry that critics argue has unfettered access to lawmakers.

For instance, the reforms include a plan intended to ban the practice of individuals working as political consultants for officials and then lobbying them once they’re in office. But the House bill in its current form does not have an explicit ban and would still allow a single company to offer both lobbying and campaign services.

House Speaker Bryan Cutler’s spokesman, Mike Straub, said the financial-interest disclosures are “a good starting point." Other pieces of the package were discussed in budget negotiations with Senate leadership and the governor, but the rest will now go through the regular committee process, possibly later this year.

Neither Straub nor Jason Thompson, spokesman for Senate President Pro Tempore Jake Corman, said they could pinpoint who inserted the language for the equity reports into the second and final version of the Administrative Code, one of several technical bills required for passing the annual budget.

“It’s an issue that is important to both [Corman] and [Cutler], and getting a greater level of transparency on the books as soon as possible is something that appealed to all sides in negotiations,” Thompson said.

At a news conference earlier this year, Cutler appeared to take on lobbyists and special interests when he said constituents “can never be silenced or manipulated by those who attempt to use access, influence, relationships or money to sway the Legislature.”

HARRISBURG — In his first speech as top leader of the Pennsylvania Senate last week, Republi…

It’s unclear what kinds of financial relationships will be unearthed with the new requirement, which is described as “equity reporting” in the law.

Lobbyists currently must report a list of the companies — or sometimes nonprofits or government entities — they lobby for along with the dates they start and end that affiliation. Based on those reports alone, it’s impossible to know whether a lobbyist is advocating for a company they own or have any kind of financial interest in.

Justin Fleming, president of the lobbyists’ group Pennsylvania Association for Government Relations (PAGR), said lobbyists are still waiting on guidelines from the Department of State about what they need to do to follow the new law.

“We want to know exactly what we have to do in order to comply with the laws and regs that are out there,” Fleming said. “Nobody’s trying to game the system.”

As for the rest of the bill package, Fleming said PAGR is willing to work with legislators to “hopefully find some common ground.”

A public affairs committee within the organization — which represents 151 lobbyists in 115 organizations — was reviewing the bills but wasn’t ready to discuss their specific positions yet, said Fleming, who lobbies for the nonprofit Pennsylvania Partnerships for Children.

With movement on the bills expected this fall, some of them will likely face fierce opposition from both the lobbyist-filled corners of the Capitol and from good-government advocates who have long called for strict reform measures.

Among the new reporting requirements, lobbyists would need to file “conflict reports” detailing conflicts between clients, and “financial assistance reports” to show any payment after lobbying successfully for a state or local grant that uses state funding. It would also cap lobbyists or firms from collecting more than $10,000 for helping win such grants.

Other disclosure-related changes come from a 2019 report produced by the House Government Oversight Committee, which Rep. Seth Grove chaired at the time. A bill now sponsored by Grove would make lobbyists, not their clients, responsible for reporting expenses incurred during actual lobbying activities — a step to more accurately depict what lobbyists spend on influencing elected officials.

His bill would also change the lobbying registration fee structure and the Department of State’s audit process, which is intended to check compliance with expense reporting deadlines and amounts but has serious flaws, according to the 2019 report. The report found, for example, that the current audit process would not be able to identify cases of under-reporting expenses, and that firms are not audited frequently enough.

Instead of the department conducting biennial audits of 3% of lobbying registrants, the bill would require the department to create an audit process “based on factors that focus on risk of noncompliance.” Audits would also be released publicly instead of being considered confidential by law.

Another major change comes at the intersection of lobbying and campaigning.

Critics have targeted the practice of campaign consultants helping elect and then lobby officials once they’re in office, saying it gives them unfair influence over legislative business.

Two Harrisburg-based firms in particular have, in addition to lobbying, worked as the primary campaign fundraisers and managers for dozens of Republican legislators, including for the leaders now pushing for reform.

One — Long, Nyquist & Associates — was founded by and staffed with former top legislative aides. The other, known as The Mavericks, is actually a trio of companies founded by Ray Zaborney, who is Corman’s longtime top political adviser. Zaborney de-registered as a lobbyist in April in anticipation of Corman’s reforms, he told The Caucus and Spotlight PA in May.

“These new rules being offered to lobbyists may seem major but they will do what we were elected to do, represent our constituents and our districts, not unelected bureaucrats and outside money,”

Rep. Joe Kerwin, a Dauphin County Republican and one of the prime sponsors of the campaign consultants bill, said during the news conference in May.

Cutler, responding to a question at the same news conference, said he and the other sponsors are “looking for a very clear separation” between campaign operatives and lobbying firms.

Still, the bill as written would not explicitly ban a single person from registering as both a lobbyist and a campaign consultant.

The ban would apply only for the term that the official was elected to when campaign consulting services were provided.

The intention is to force people to choose between lobbying or campaigns, said Mike Straub, Cutler’s spokesman.

“But there are concerns that may enter us into some constitutional gray area about what we can and cannot tell people about the jobs they choose to work,” he said.

The bill would also still allow firms to provide both lobbying and campaign services — as long as the other prohibitions on individual employees are followed. That means a group like the Mavericks, which has claimed to have strict firewalls in place to prevent the overlapping of lobbying and campaign services, would still be able to set up their organization to play both sides.

House Democrats, who previously introduced a nearly identical bill, are already taking issue with that allowance.

“They changed the definition of campaign consultant from ‘person’ to ‘individual,’” spokesman Bill Patton said, comparing the Republican bill to House Democratic Leader Joanna McClinton’s version. “Those words have different meanings in the law and the Republican bill would still allow the same firms to combine campaign consulting with lobbying simply by using different individuals for each function. House Democrats want to put a true separation between doing campaign work and lobbying.”

In Pennsylvania statutes, a “person” can refer to a corporation or firm in addition to an individual, whereas an “individual” refers only to an individual person, according to the National Conference of State Legislatures. That means the word change in the bill would allow firms — “people” under the law — to still provide both lobbying and campaign services.

Neither the Republican or Democratic versions address another way lobbyists influence campaigns: donations to lawmakers’ political action committees, which operate under no campaign contribution limits in Pennsylvania.

Small and large firms alike use PACs to donate directly to candidates’ campaigns or to the party-affiliated PACs that benefit them, like the House Republican Campaign Committee or the Senate Democratic Campaign Committee.

At least 50 groups registered as lobbying firms with the Department of State operate 67 PACs, according to a Caucus review of the state’s lobbying reporting database. Some spend only a few thousand dollars per cycle while others dish out tens of thousands.

Straub, speaking for House Republicans, said restricting those PACs “would likely raise constitutional questions regarding freedom of association.” House Democrats’ spokesman Patton said focusing on campaign consulting is “a much more direct involvement than groups or individuals who simply donate in support of candidates.”

Negotiations later this summer and fall will likely lead to amendments as lawmakers, lobbyists and the governor’s administration haggle over the language.

House and Senate leaders may need to come to some agreements first, as both are now introducing separate versions of the reforms.

Despite Cutler and Corman initially announcing the plan together, House Republicans introduced their bills in June while Senate Republicans have, as of The Caucus’ publishing deadline, yet to put forth their package. An outline of the Senate bills obtained in advance by The Caucus shows the Senate’s package will include five — as opposed to the House’s 11 — bills and will largely overlap with the House versions.

Meanwhile, other measures long sought after by reformers are still missing in the bill package but could also come up later in negotiations, such as a ban on gifts between lobbyists and legislators.

Both sides currently need to disclose gifts only when they reach a certain dollar threshold — $250 for gifts and $650 for expenses for transportation and hospitality.

“I do think that that could very well come up as part of the discussion,” Cutler said in May when asked about the gift ban.

The bills will also need to include significant enforcement mechanisms to ensure accountability and transparency, said Khalif Ali, executive director of the good-government group Common Cause Pennsylvania.

Ali said he applauded the House bills as “an initial step.”

Transparency in lobbying and campaign finance “tell voters a story of why decisions are being made,” and without enough details or real-time reporting right now, “we’re not able to do that,” he said.

“We know there’s diminishing confidence in democracy as a political system here,” Ali said, referring to the 2020 election and other decisions by elected officials. “These types of bills and movements are absolutely critical in bolstering confidence in our democracy. We can’t do things for show.”

Mike Wereschagin contributed to this report.

Lobbyists and lobbying firms are for the first time disclosing their financial interests in companies for which they lobby, offering a rare ne…