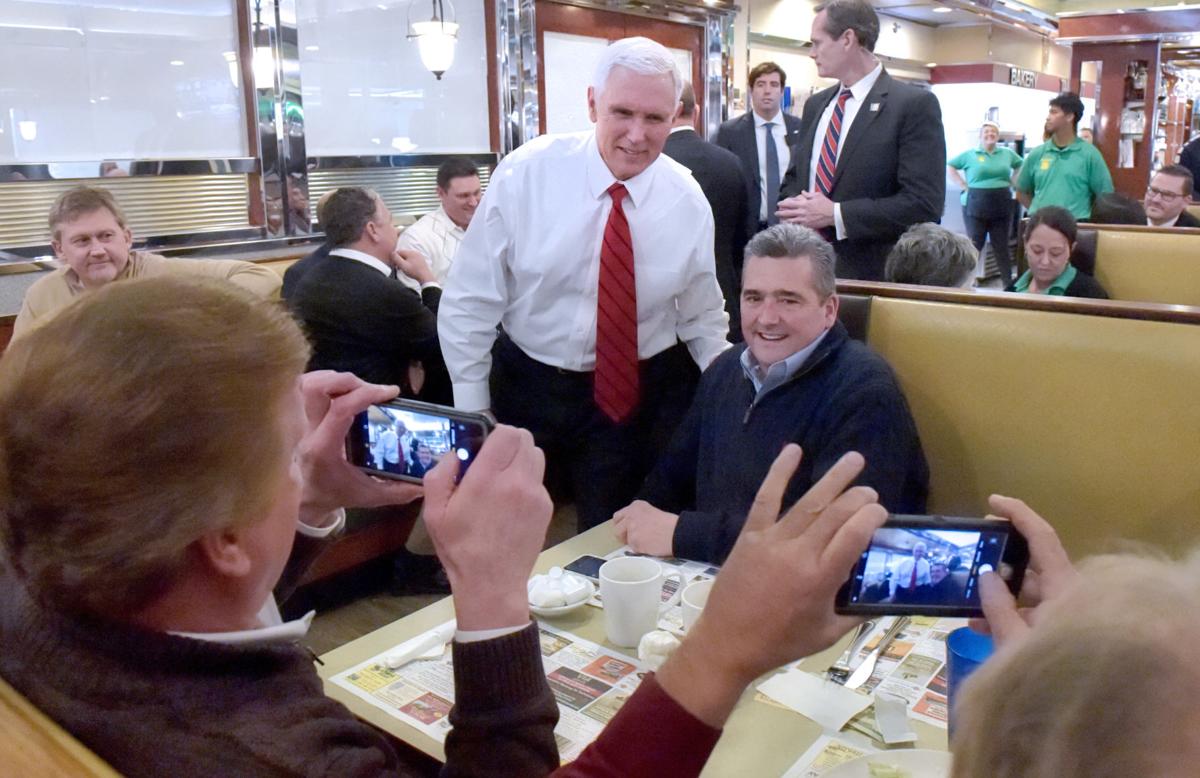 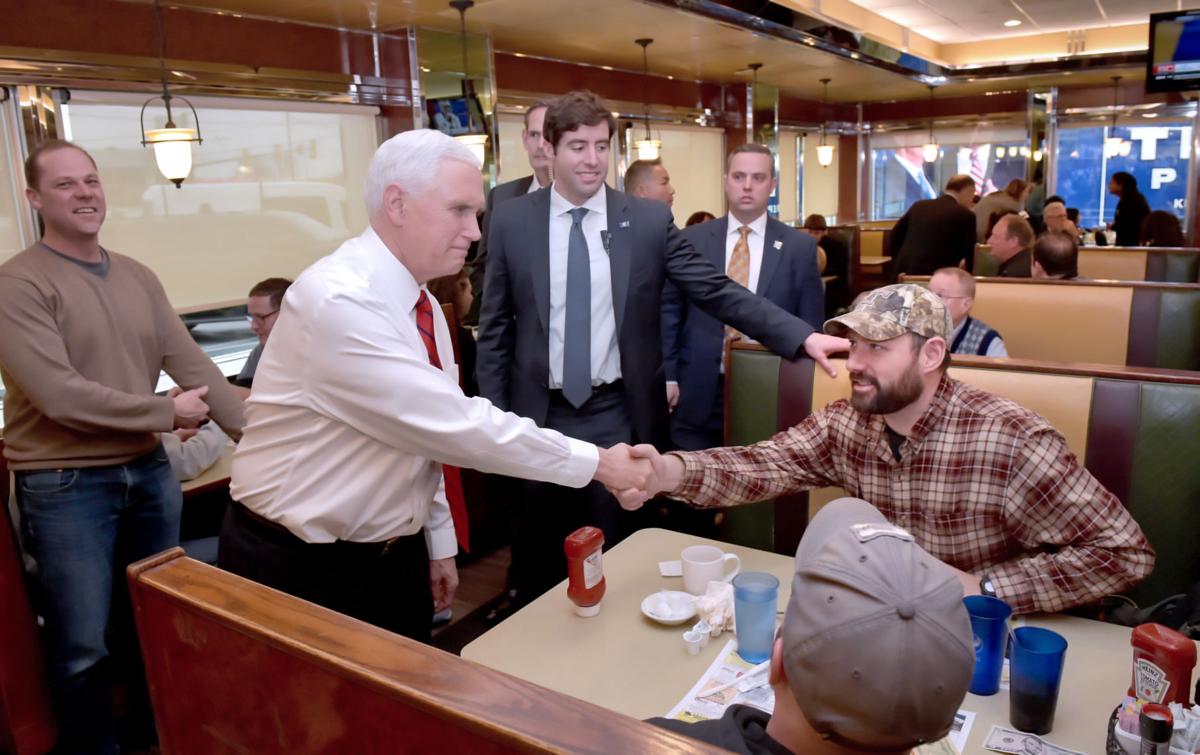 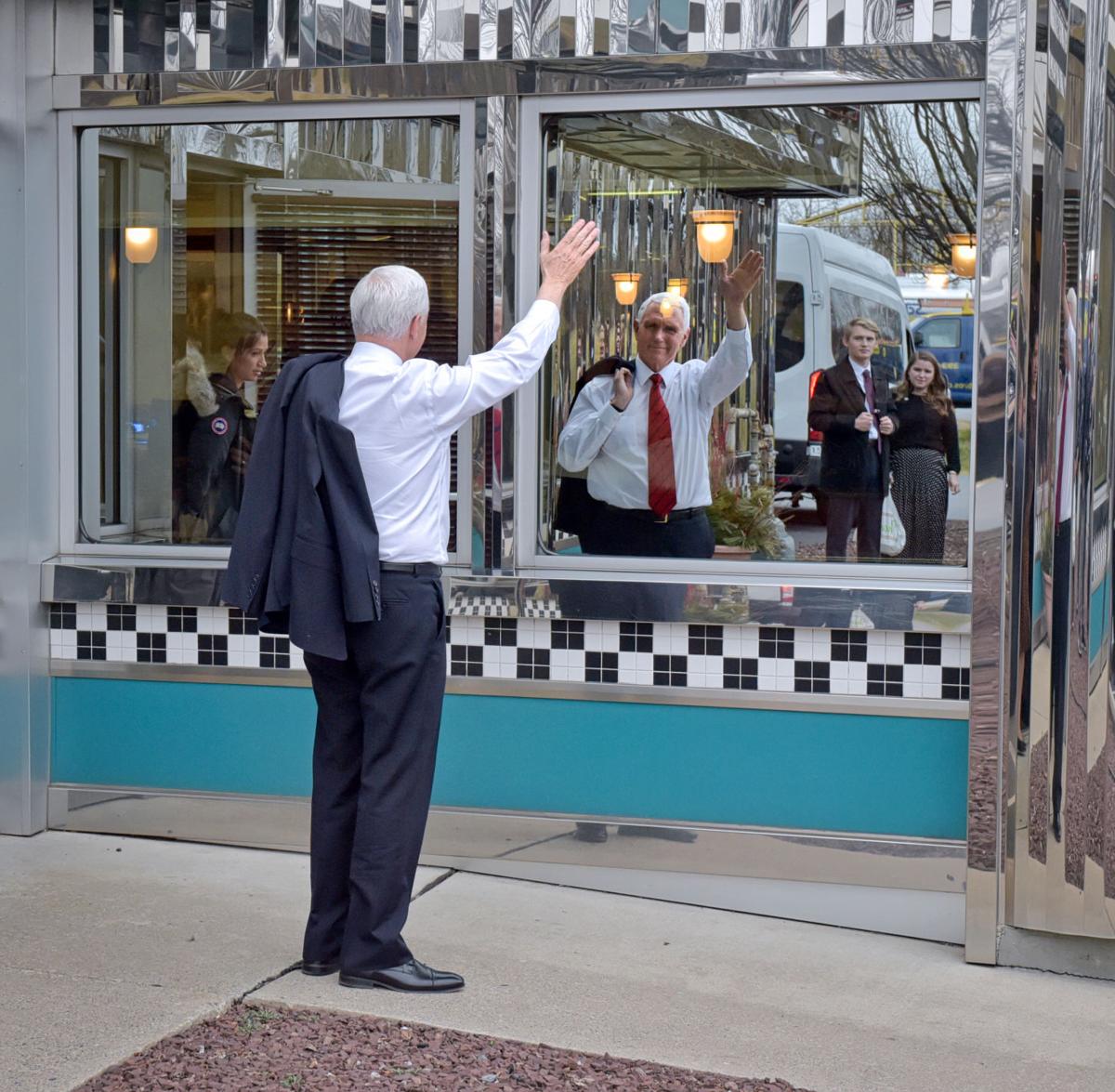 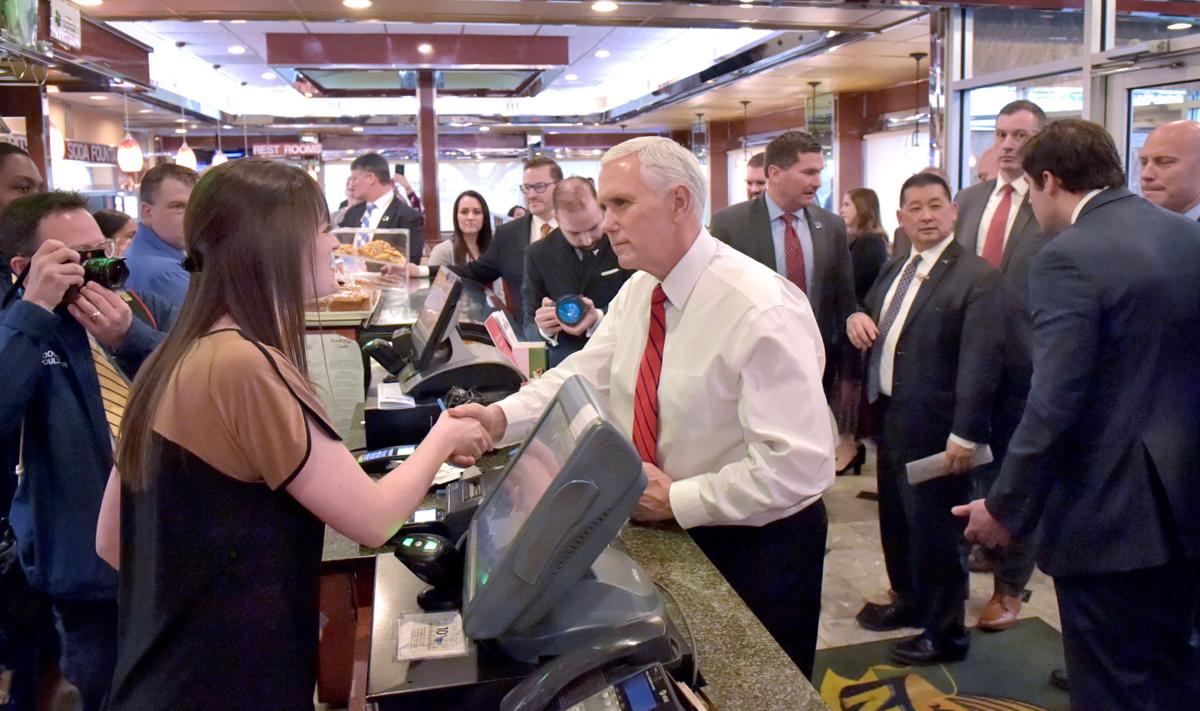 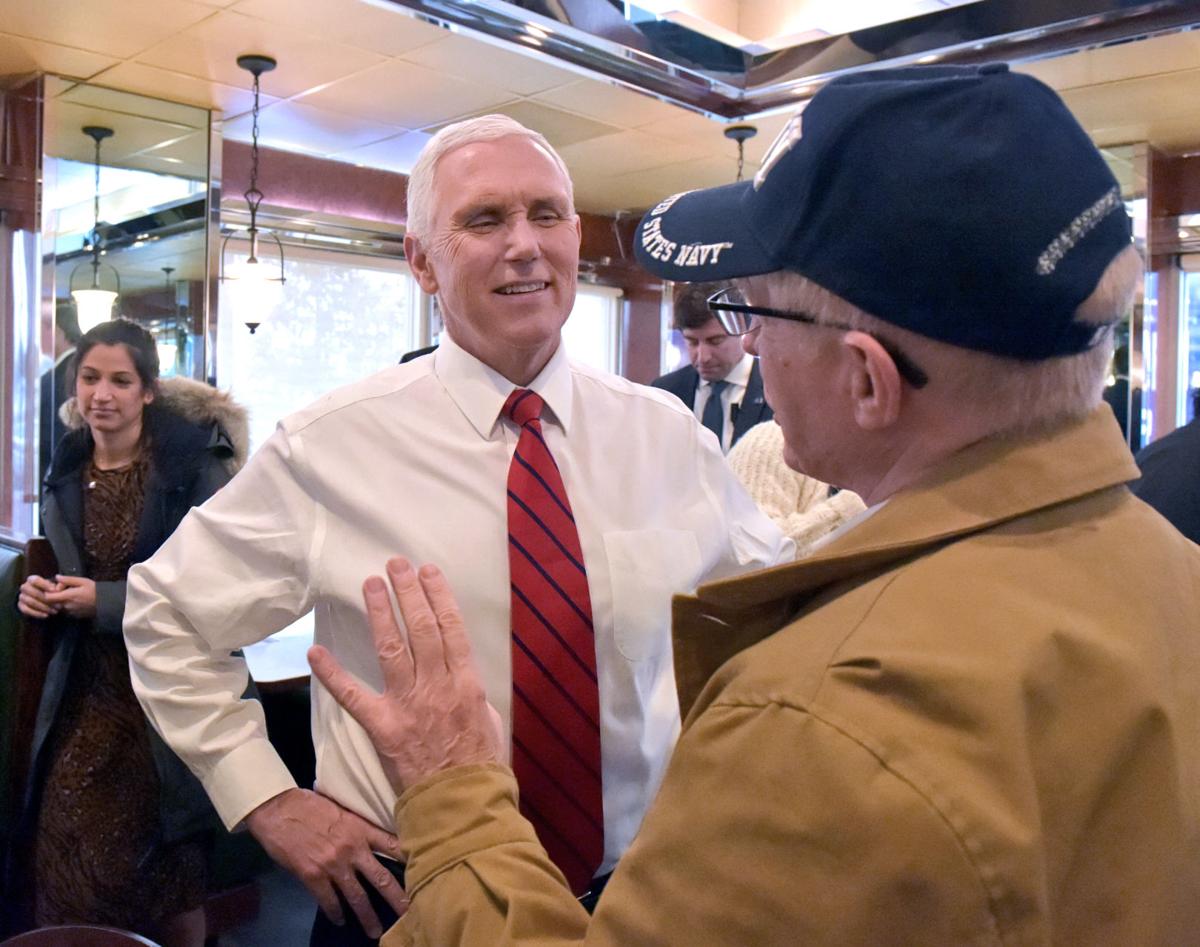 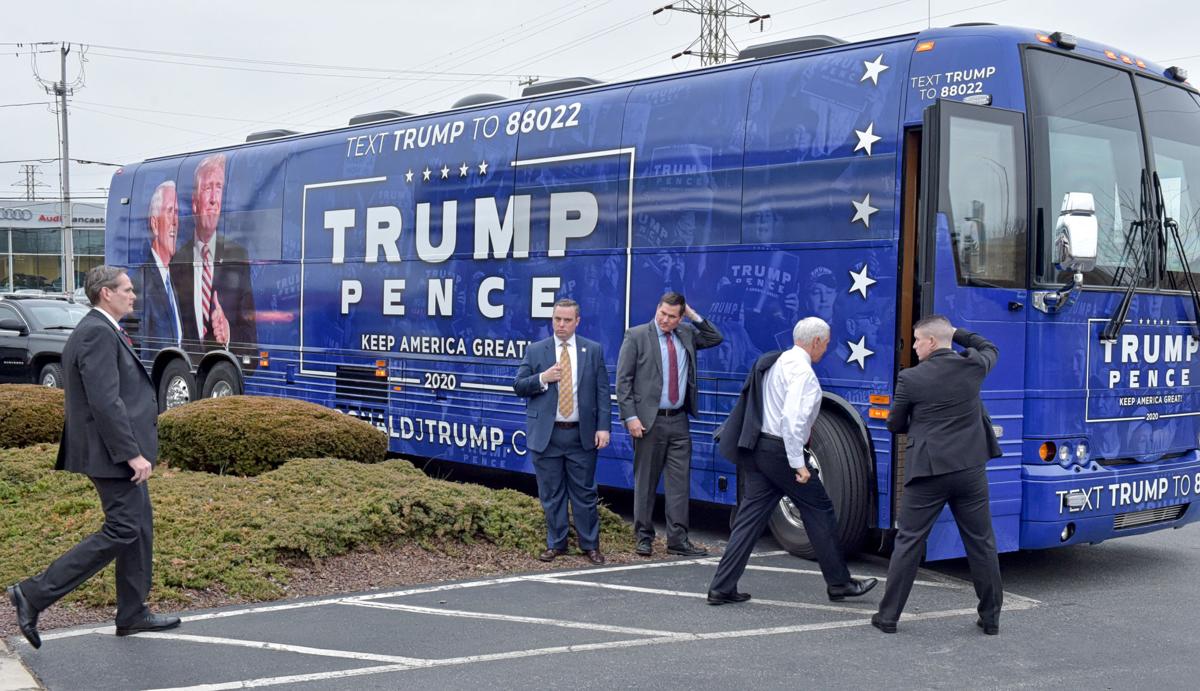 With a greeting, a handshake and picture taken at almost every table, Vice President Mike Pence made his way out of Lyndon City Line Diner  and continued on to his next stop Wednesday afternoon.

The vice president, accompanied by Education Secretary Betsy DeVos, fit in a short stop in Lancaster County between speaking at a West Philadelphia school in the morning and headlining an evening “Women for Trump” event in Cumberland County.

Traffic on several major highways was impacted for hours in the afternoon due to the path of the motorcade.

Still, the Manheim Township diner was packed, with people who were there specifically to see Pence and others who just stopped in to eat and got caught up in the action.

Pence spoke to “every single person in this place,” said owner William Quinn, who got to meet the vice president.

Quinn learned about the possible visit last week when the advance team called the diner and asked about Pence dropping by.

“I had to think a little bit first, to make sure it was legit,” he said, noting the unusual nature of the call.

But the diner owner was thrilled with the experience, calling the visit “an awesome experience” and describing Pence as “a very nice guy.”

Pence entered through a side door into a closed meet and greet with local community leaders, including Lancaster County District Attorney Heather Adams, Rep. Lloyd Smucker and business owners.

After the closed event, Pence made this way through dozens of tables and booths, answering questions and asking some of his own. Republican Smucker also greeted diners alongside Pence.

One table waited with a typed letter admonishing Speaker of the House Nancy Pelosi for ripping up a copy of President Donald Trump’s speech Tuesday night. The diner was hoping Pence would sign the letter. It’s not clear whether he did.

Other customers couldn’t let Pence pass without asking how it was sitting next to Pelosi through the entire State of the Union. His response was not audible to a reporter.

“It was exciting,” said Herb Zinser, 77, one of the men who asked Pence about Pelosi.

“It’s not too often you get too close to a president or a vice president,” said Bobby Bushong, 31, who was sharing a table with Zinser.

Lancaster County Commissioner Ray D’Agostino said he was appreciative that Pence was meeting with “everyday folks, finding out how things are going and getting that feedback.”

D’Agostino was not in the closed meeting, but he said he did get to meet with Pence during his walk through the restaurant and thank him.

For Quinn, the diner owner, it was “an honor” to have the vice president in the family restaurant his father started 42 years ago, he said.

“He (Pence) ordered a cheeseburger, took a bite of it and said it was amazing,” said Quinn.

Pence took the rest of the burger for his bus ride to Camp Hill.

“It’s over, America,” Vice President Mike Pence told the crowd at a Radisson in Cumberland County, just an hour after the U.S. Senate voted to…

Students from around Lancaster, York nominated to U.S. service academies by Rep. Smucker