Two Republicans -- Mehmet Oz and David McCormick -- are peppering Pennsylvania with TV ads as both seek the GOP nomination in this year's U.S. Senate race. 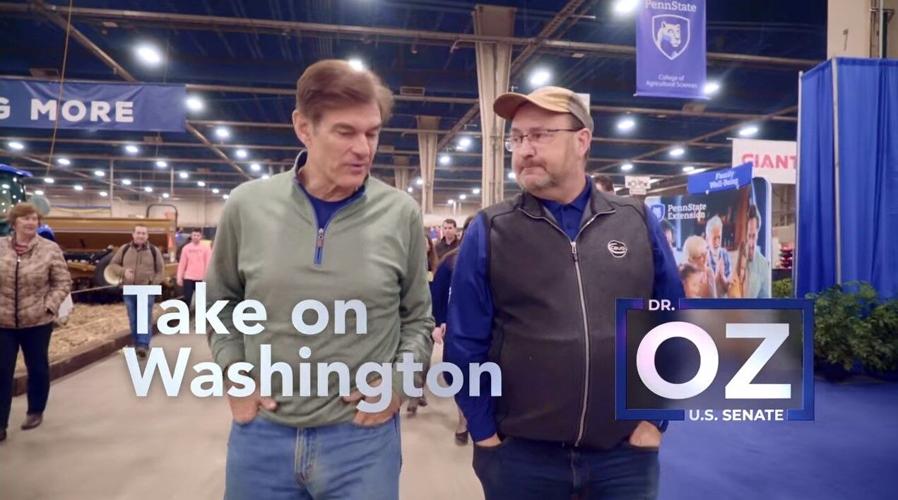 Mehmet Oz presents himself as an outside candidate in one of the many TV ads he's airing as he seeks the GOP nomination in Pennsylvania's U.S. Senate race. 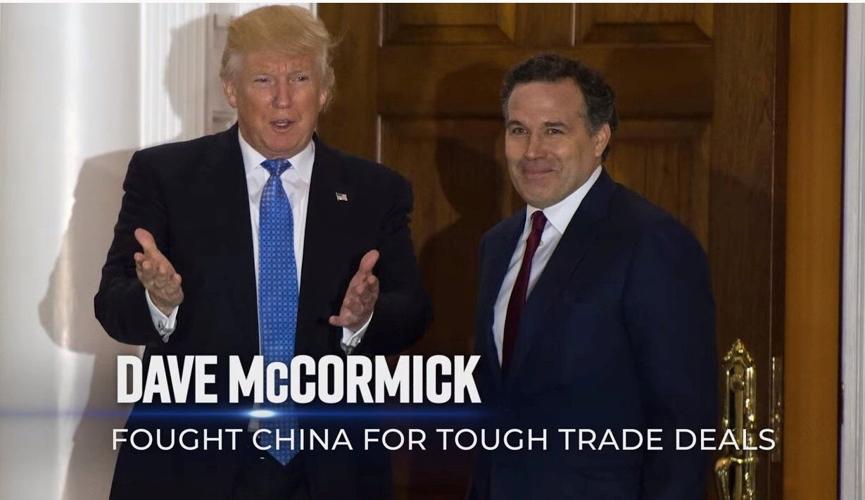 David McCormick, a hedge-fund CEO, touts his connections to former President Trump in one of his TV ads. McCormick is running for the Republican nomination for U.S Senate.

Political primaries in Pennsylvania can be a little like Christmas. Exciting. Expensive. And the season seems to start earlier every year.

Not a lot of good cheer, though.

Three months from the day voters are scheduled to go to the polls (barring a state Supreme Court-ordered postponement), the best-funded Republican candidates for the must-win U.S. Senate seat are already fending off barrages of negative ads from their opponents and the super PACs backing them.

And they’ve already put this race on track to be the most expensive primary in state history, analysts say. As of mid-February, candidates and PACs had paid for or reserved more than $32.5 million in TV and radio air time, according to the Ohio-based ad tracking and buying firm Medium Buying. The only race nationally that comes close this year, according to the firm, is Ohio’s Senate race, where $26 million has been paid for and booked.

“It could reach $80 million,” said G. Terry Madonna, senior fellow in residence for Political Affairs at Millersville University and a decades-long observer of Pennsylvania politics.

That means three Republicans in one primary race could spend nearly half the $170 million spent on the most expensive Senate race in state history, in 2016, when Pat Toomey, a Lehigh Valley Republican, won reelection.

And the Democratic candidates have yet to get on the air.

“It’s crazy,” said Mike Mikus, a long-time Democratic political operative. Usually, at this stage of a race, candidates attempt to introduce themselves to voters, lock down insider endorsements and hone their campaign’s message.

“It’s very rare you’re going to be engaged in a street brawl, which is what this is,” Mikus said.

In the absurdly large field of 37 declared candidates (20 Republicans, 16 Democrats and one unaffiliated), only three have made significant ad buys.

Former hedge fund CEO David McCormick, television host and surgeon Dr. Mehmet Oz and former ambassador and private investment fund CEO Carla Sands — each a millionaire many times over — have spent millions on TV and radio air time to introduce themselves to voters in a state each only recently moved to.

(McCormick grew up in western Pennsylvania and ran two companies in Pittsburgh before leaving to join the George W. Bush administration in 2005. Oz, who owns a mansion in New Jersey, got his medical degree at the University of Pennsylvania and registered to vote in this state only in December 2020; he listed as his residence a suburban Philadelphia home owned by his wife’s family. Sands grew up in Camp Hill and attended in-state colleges.)

As the candidates try to stay positive with their introductory ads, super PACs are spending millions more to bloody the two biggest spenders, McCormick and Oz.

Honor Pennsylvania, a super PAC supporting McCormick, has already bought more than $12 million in air time, almost all of which has gone to attack Oz, according to the nonprofit Center for Responsive Politics, which tracks campaign spending at OpenSecrets.org.

The celebrity surgeon, whose mansion was featured in a 2020 People magazine article, faced allegations of carpet bagging almost immediately after entering the race in December.

But Honor Pennsylvania chose to try to paint him as a Republican in name only, or RINO, a favorite insult among the party’s hardcore base as well as its leader, former President Donald Trump.

One 30-second spot accuses Oz of being “right for Hollywood,” features a photo of Oz on his television show next to Michelle Obama, and accuses him of supporting heretical policies such as Obamacare and red-flag laws, which make it easier to take guns from people deemed a danger to themselves or others.

It also dredges up a $95 million penalty that his wife’s family’s company, Asplundh Tree Experts Co., paid for hiring undocumented workers. When U.S. Immigration and Customs Enforcement announced the penalty in 2017, it said it was the largest civil settlement in the agency’s history.

Oz has responded with bio ads showing him in a tan work jacket outside a long-shuttered steel mill, and, echoing Trump’s defense of his own wealth, saying he “can’t be bought.”

American Leadership Action, the super PAC supporting Oz, spent more than $1.5 million on a barrage of ads tying McCormick to China, perhaps the biggest bogeyman in current conservative politics (after Democrats, that is).

After leaving the Bush administration, McCormick became CEO of Connecticut-based Bridgewater Associates, the largest hedge fund in the world. The company set up a billion-dollar investment fund in China, the world’s second-largest economy.

“McCormick went to China and called them an ‘ally,’” the narrator says. The ad also attacks McCormick for cutting 50 Pittsburgh jobs when he ran the company FreeMarkets, then creating 100 jobs “overseas.” The overseas jobs were in India, and the ad features a rotating globe showing India highlighted in red, followed by China, also highlighted in red.

The West Point and U.S. Army Ranger School grad hit back in an ad saying Oz had “crossed the line” by questioning his patriotism. In it, McCormick says he joined the service to “fight communism” and “faced down Chinese weapons” when he fought in the first Persian Gulf War.

“We all know China created COVID. It’s time to make them pay for it,” McCormick says in the ad, embracing another unproven belief widespread in conservative circles that the coronavirus was created as a bioweapon or leaked from a research lab.

McCormick and his lawyers also got American Leadership Action to change an ad that claimed Trump fired McCormick. McCormick never worked for Trump, but he reportedly turned down an offer for the Defense Department’s No. 2 job during Trump’s transition in early 2017. His law firm sent letters to several television stations saying the ad was “demonstrably false” and quoting FCC regulations saying stations have a duty “to protect the public from false, misleading or deceptive advertising.”

Technically, Oz wasn’t the creator of the false ad, or the attacks on McCormick as a sinophile. Those were American Leadership Action’s ads.

But people don’t care about or make such distinctions, Mikus said. “Voters don’t care who paid for the ads.”

And though negative ads, when done well, wound the target more than the attacker, the candidate making the attack tends to pay at least some price for slinging mud, Mikus said.

Since McCormick and Oz are the two with the biggest on-air presences, they’ll associate ads attacking Mc-Cormick with Oz and vice versa, he said.

Another downside to going negative so early in the race: “Democrats and independents, they’re seeing these ads as well,” Mikus said. By the time this slugfest ends, swing voters will have been watching months of attacks on those two candidates, and if one of them is the nominee, they’ll face an electorate where some potentially persuadable voters have their minds made up about them.

“Ticket-splitters are the ones who decide elections in Pennsylvania,” Mikus said.

Normally, candidates would be trying to bank good will with those voters in anticipation of the eventual day when the campaign turns negative.

“It’s very tough in politics in general to get people to like you and trust you. You want to start off with a sustained positive presence on the air. That’s very tough to do when someone’s beating you over the head,” Mikus said.

But this race is about the furthest thing from normal that Pennsylvanians have seen in a long time, maybe ever, Madonna said. A Senate race usually attracts members of Congress, state-level elected officials, mayors and the like.

“We have a TV personality, the CEO of a hedge fund, an ambassador to Denmark who was also an actress, and a former boxing commissioner (lawyer George Bochetto),” Madonna said. “This is the most unusual slate of candidates in modern Pennsylvania history.”

And it’s not a given that a knock-down, drag-out primary necessarily weakens the eventual nominee, said Joseph DiSarro, chairman of the political science department at Washington & Jefferson College who himself is a conservative Republican.

“If this were New Jersey, you’d say they are hitting with an axe,” he said, before noting the upside that a nasty fight also “keeps you in the public eye.”

Where does TV doctor Mehmet Oz hang his stethoscope at night? Pennsylvania voters will want to know

Lancaster County is now a 'second-class A' county; here's what that means

The mostly pointless way Pennsylvania sorts its counties, and how Lancaster could change its county class soon [Lancaster Watchdog]

Lancaster County residents, congratulations! There’s a chance that you’re about to get an upgrade.

Meet Kathy Barnette, the GOP Senate candidate who could win next week's primary, thanks in part to the Oz-McCormick slugfest

In politics, most of the time it’s all about the money – how much a candidate can raise and spend.