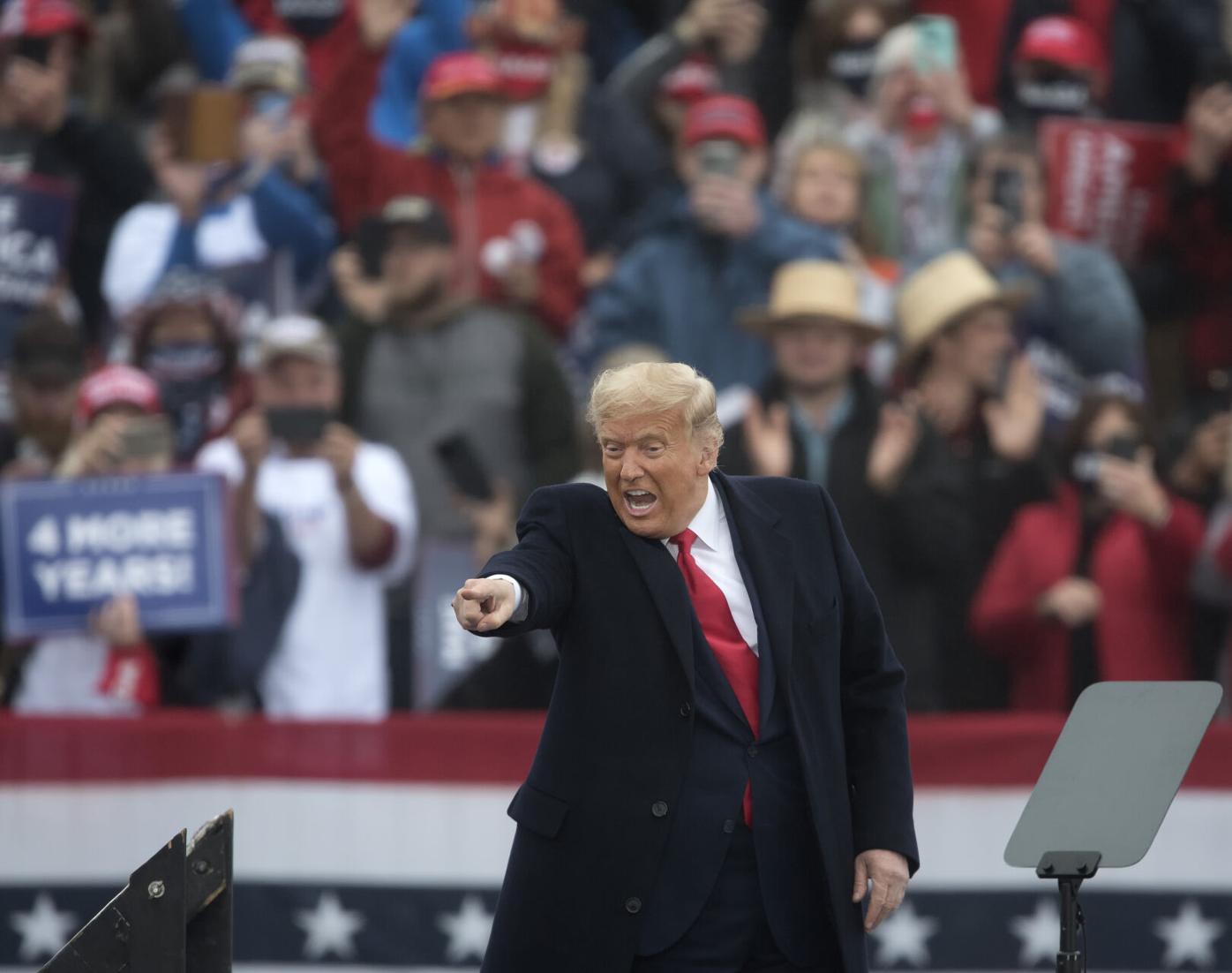 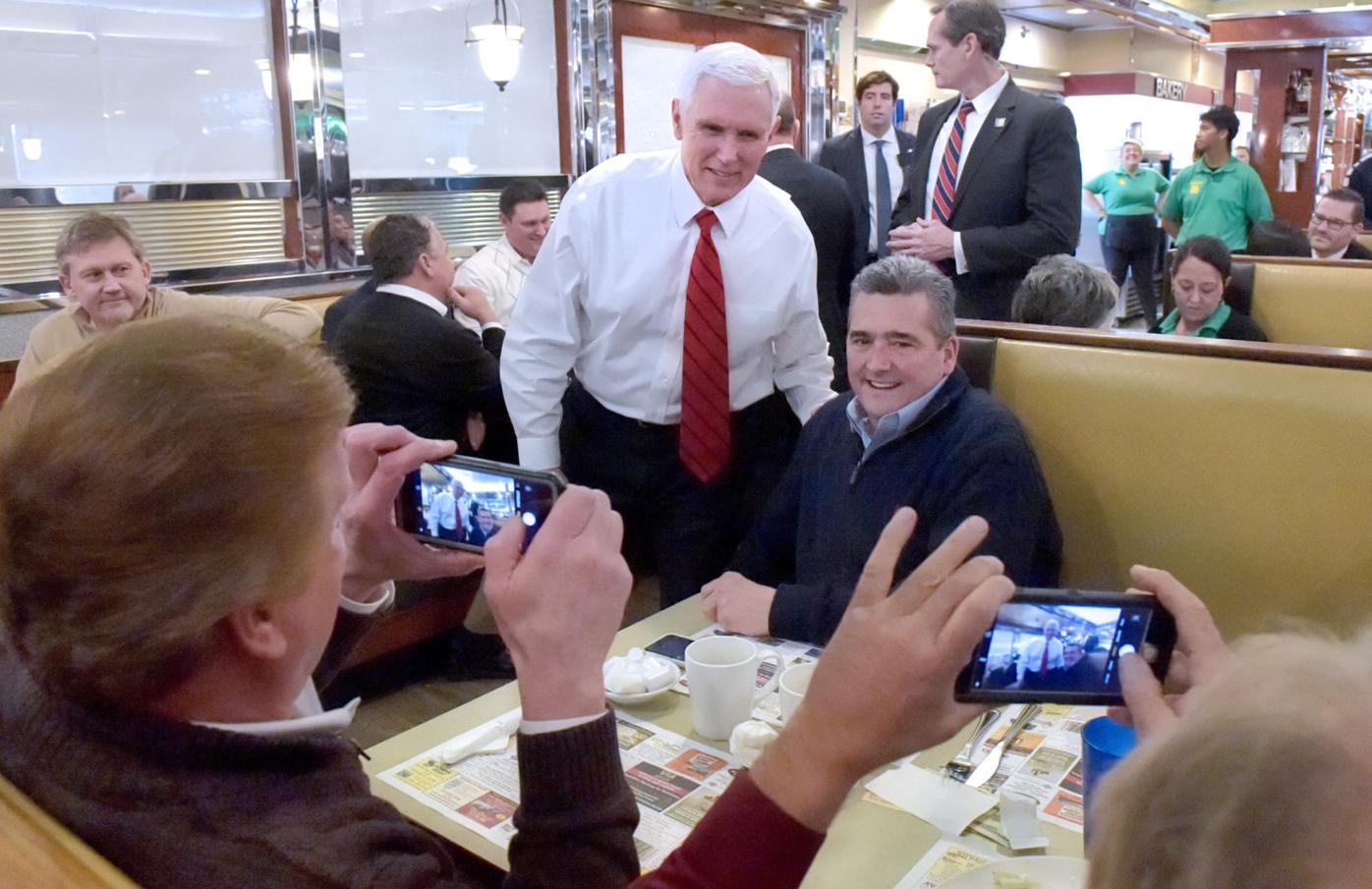 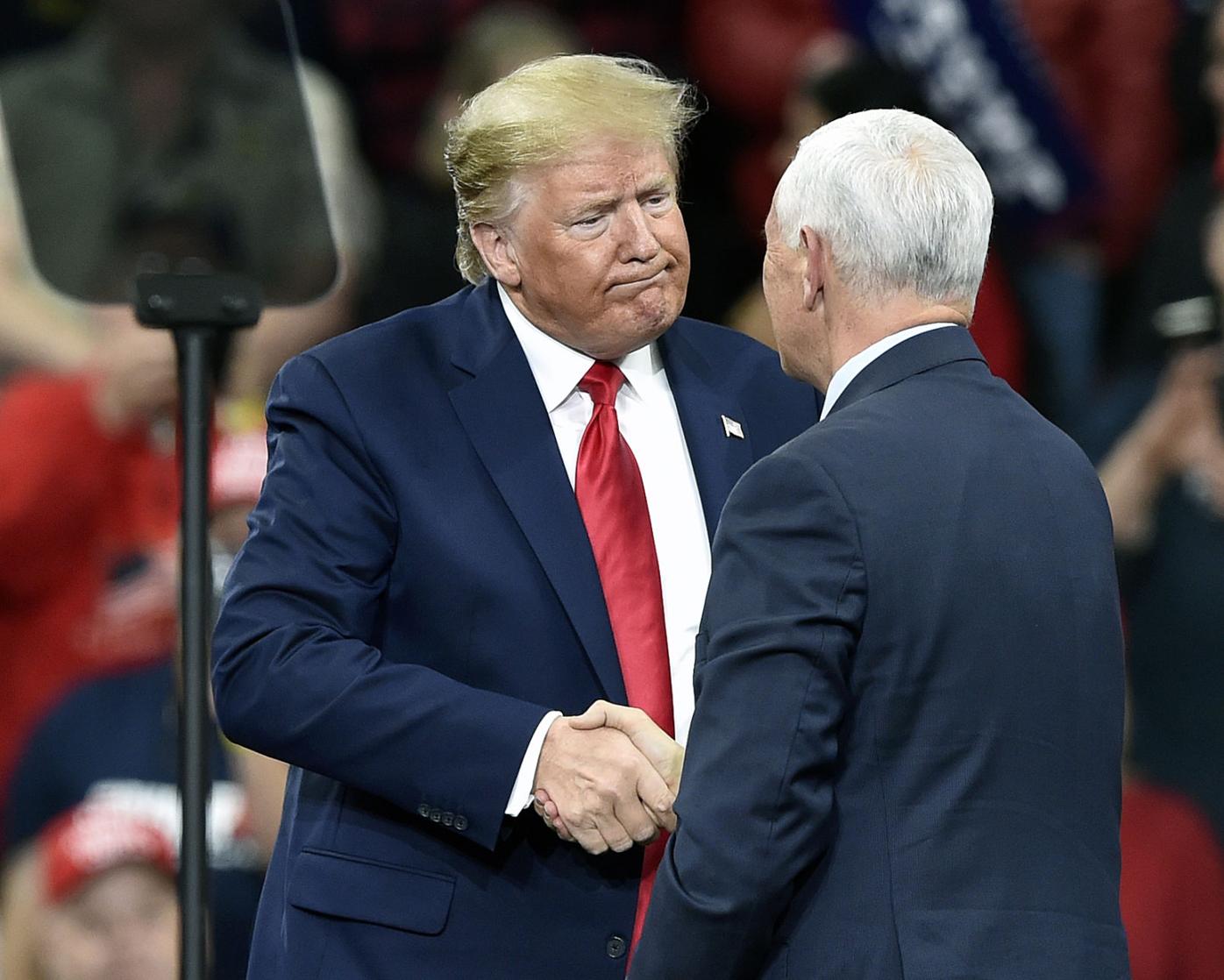 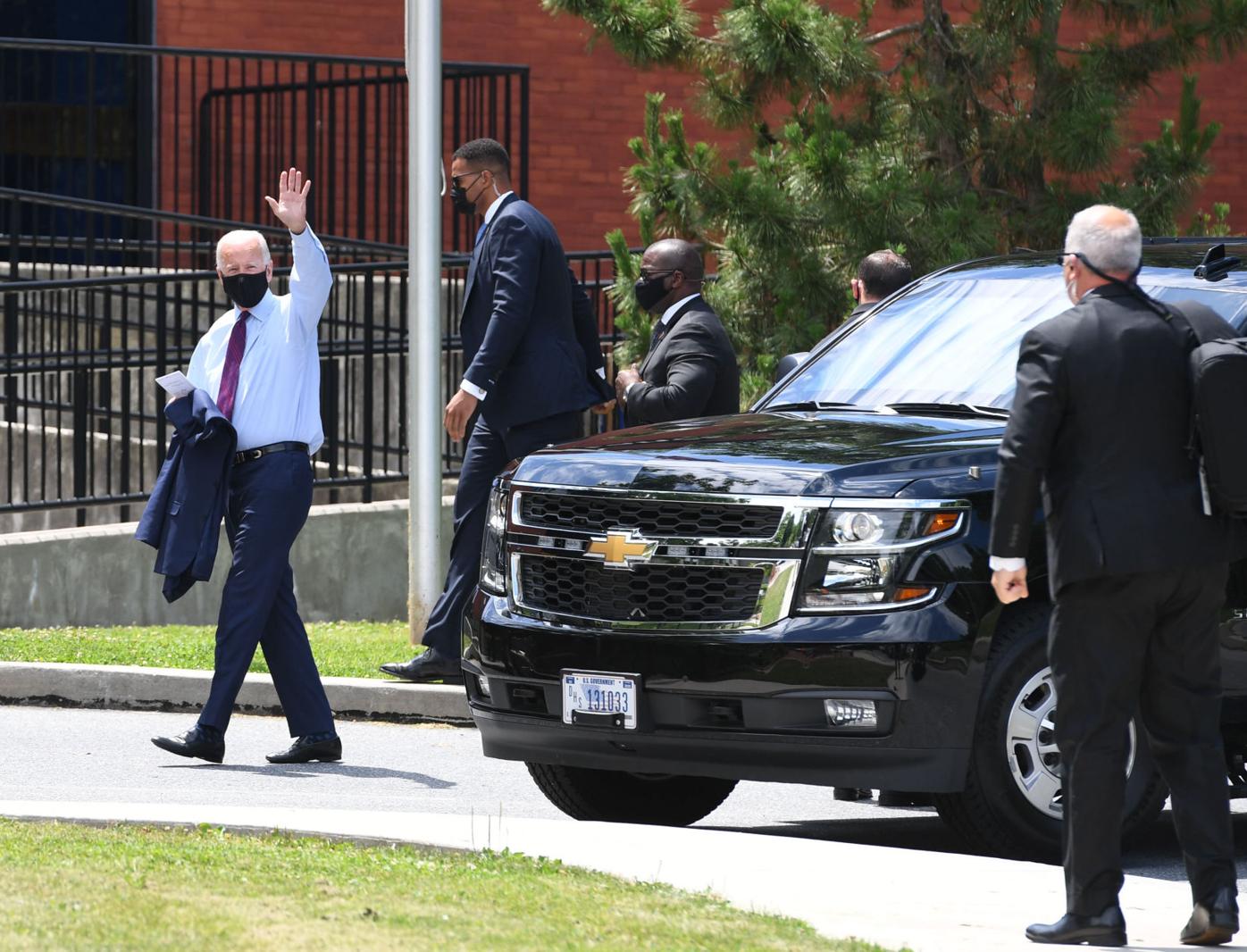 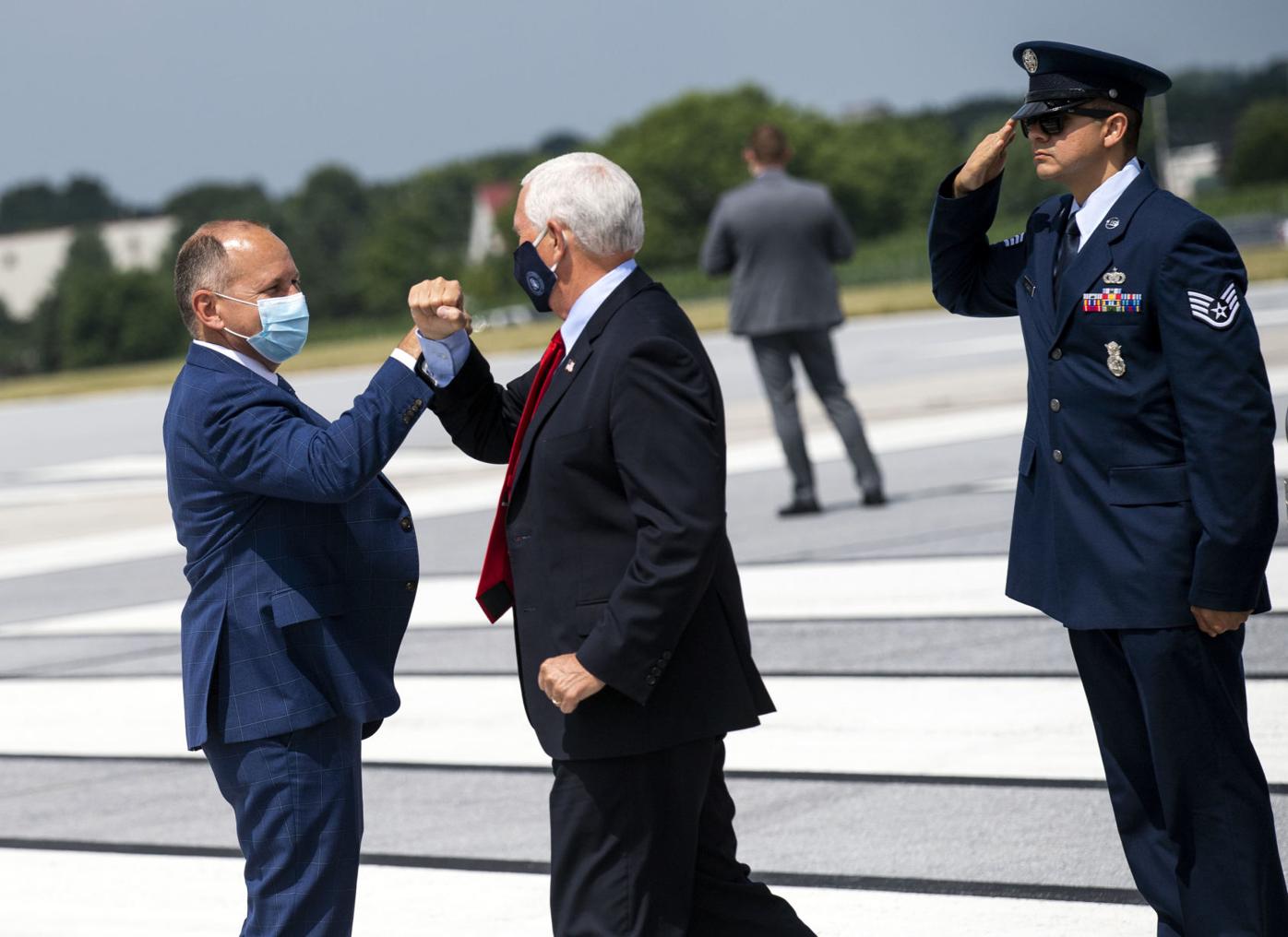 Congressman Lloyd Smucker, left, greets Vice President Mike Pence at Lancaster Airport after Pence landed on Air Force Two Thursday, June 9, 2020. Pence will be making a few stops in Pennsylvania while on a bus tour, including at a Manheim farm, a business in Chester County and a “Back the Blue” rally at a Philadelphia Fraternal Order of Police lodge. 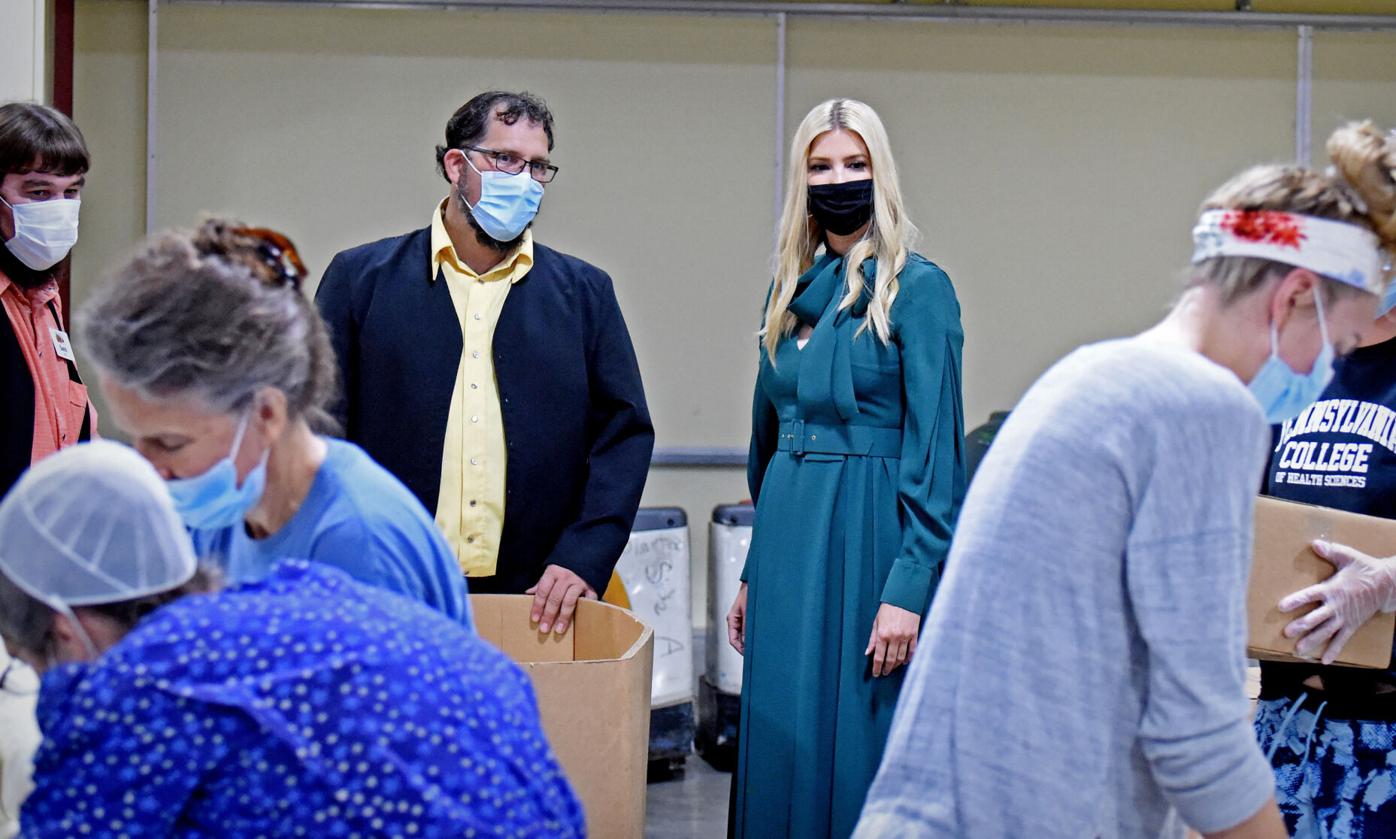 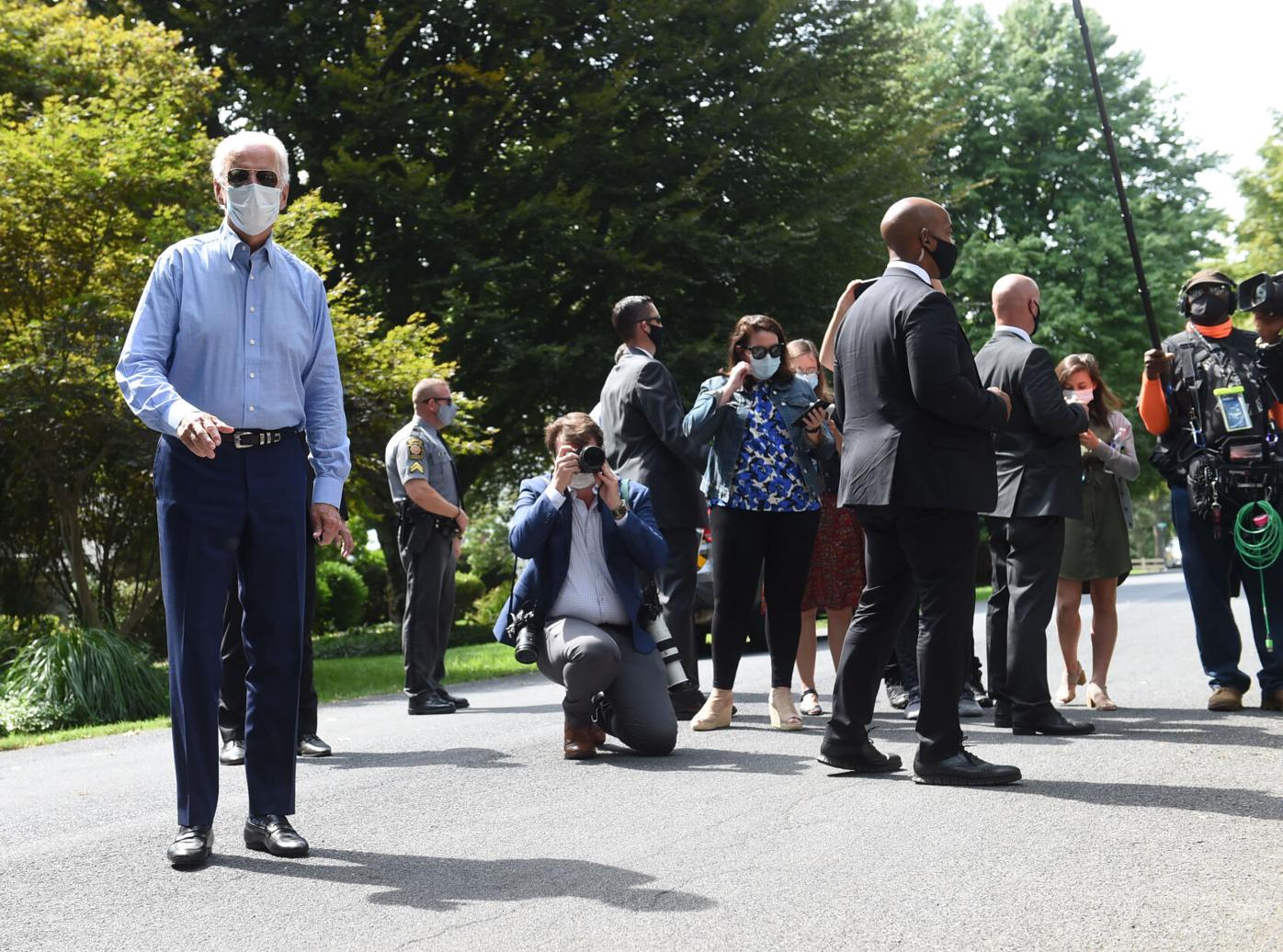 Former Vice President Joe Biden speaks to the crowd after the visit to a home in Lancaster Township to discuss with the union members about workforce in Pennsylvania. 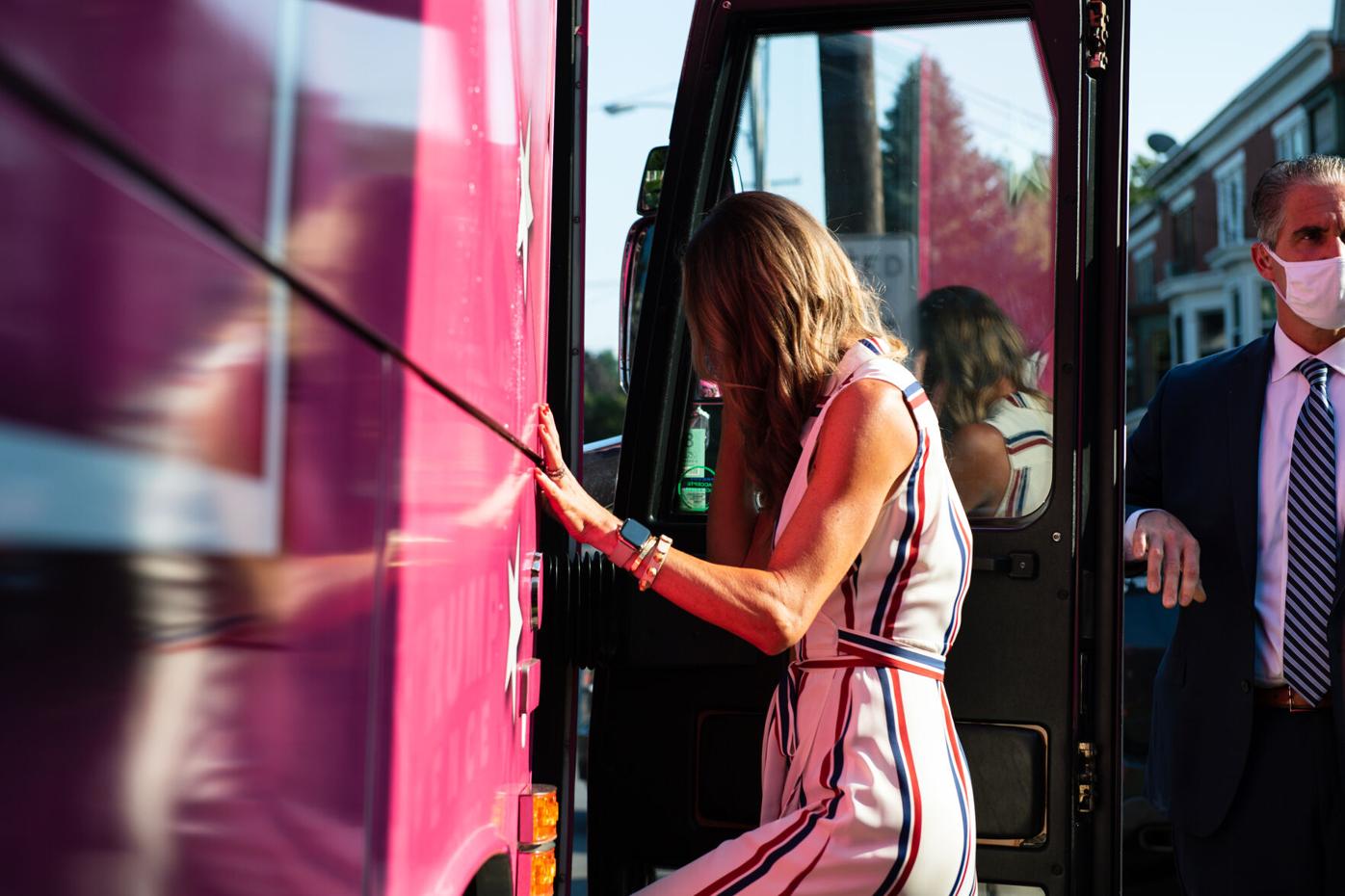 Lara Trump departs from the Republican Committee of Lancaster County following a stop to kick-off the Women for Trump bus tour on Monday, August 10, 2020. 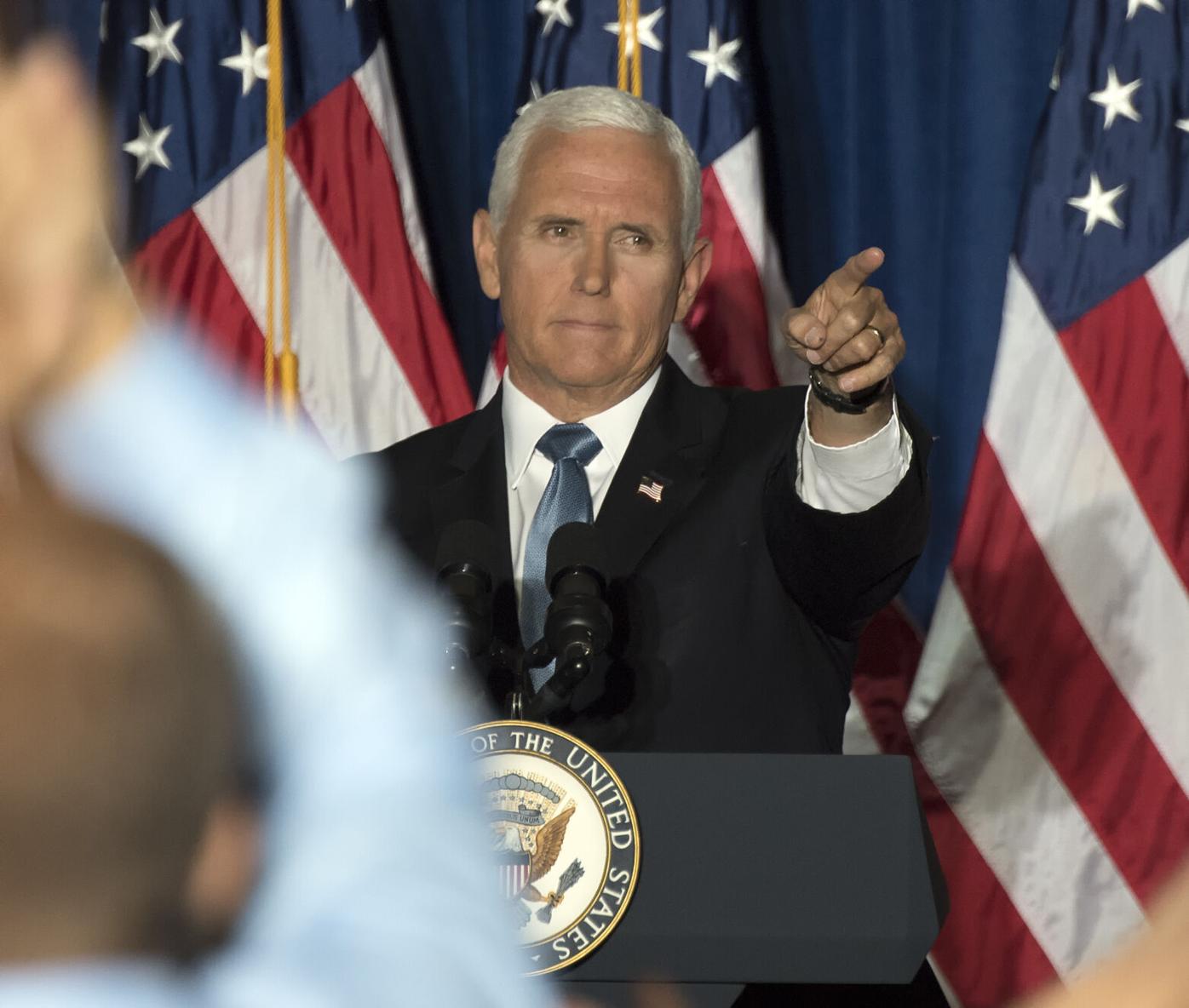 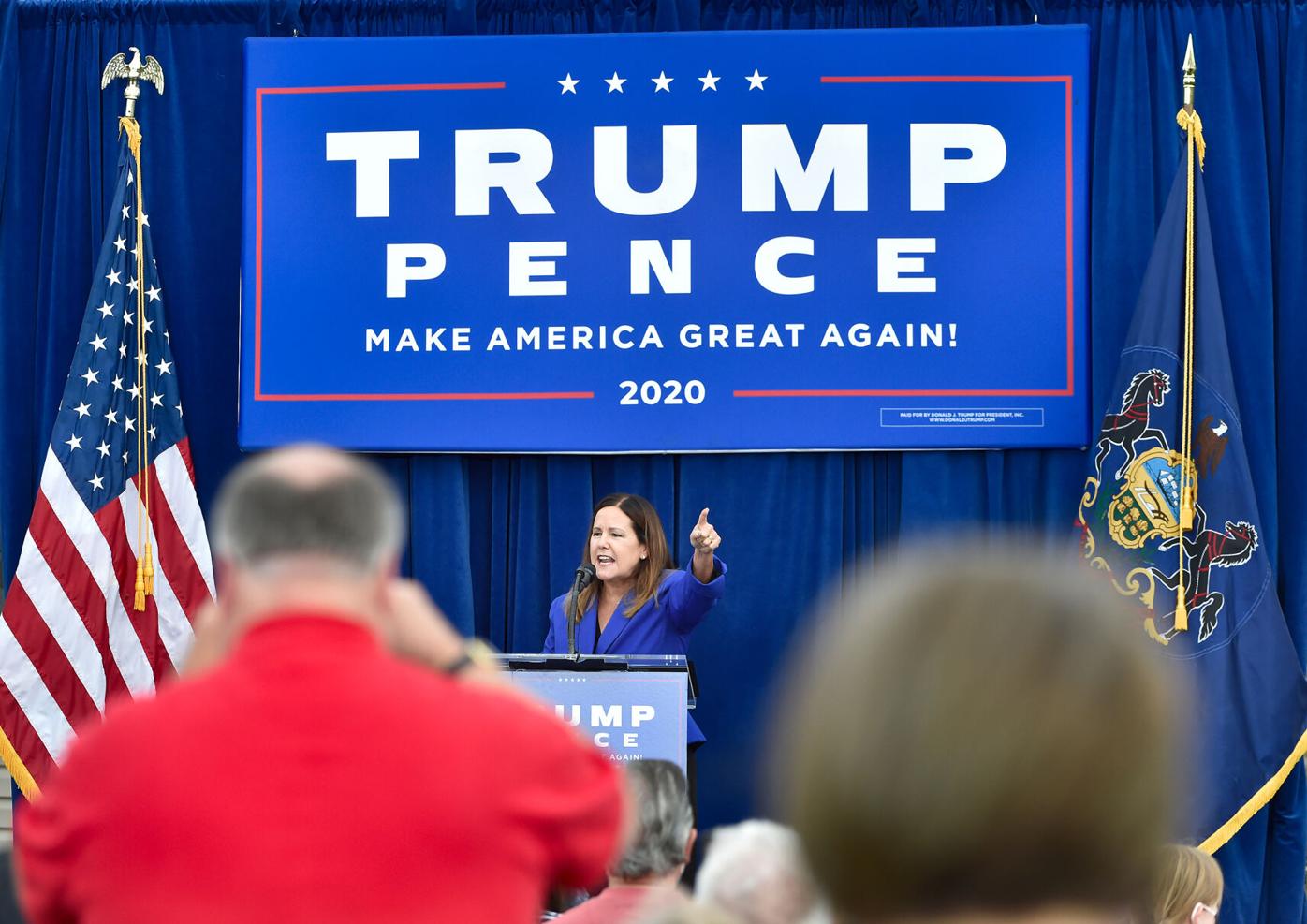 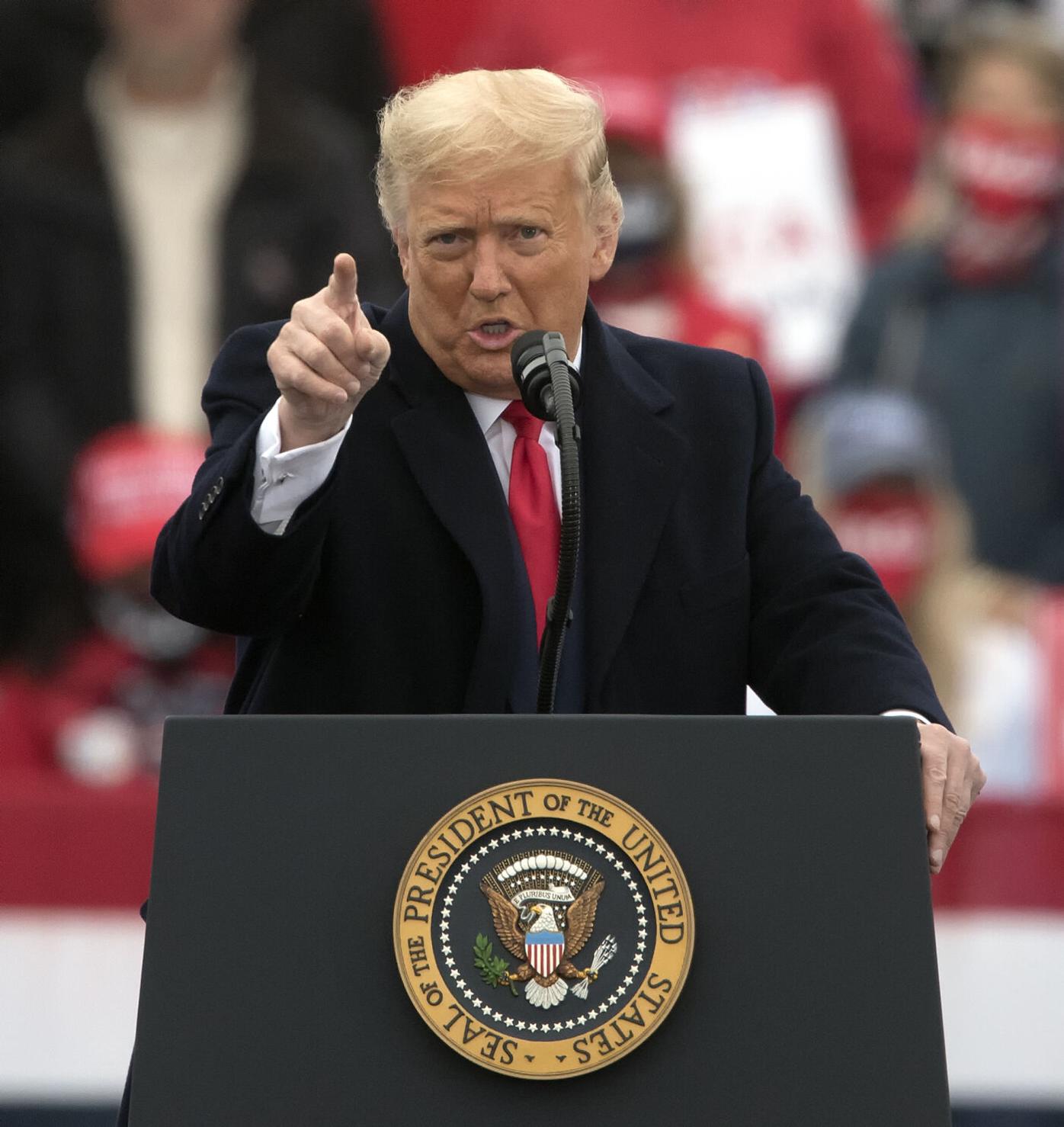 The county has also seen recent visits from Vice President Mike Pence and his wife, Second Lady Karen Pence. Since the end of 2019, the Trump reelection campaign has stopped in Lancaster County nine times.

Former Vice President Biden has stopped in Lancaster County twice since being announced the Democratic nominee for president.

Pennsylvania is seen as one of the key states to win for Election Day.

Here's when and where Biden and Trump's campaigns stopped in Lancaster County.

Pence visited the Lyndon Diner before he went to a Women For Trump event in Camp Hill.

For William Quinn, the diner owner, it was “an honor” to have the vice president in the family restaurant his father started 42 years ago, he said.

“He (Pence) ordered a cheeseburger, took a bite of it and said it was amazing,” said Quinn.

Former Vice President Joe Biden visited with three families in a closed meeting in Lancaster city to discuss how the Affordable Care Act has helped them, as the Trump Administration petitions the Supreme Court to invalidate it.

Biden met with the families, not all of whom are Lancaster natives, in a courtyard at Lancaster Recreation Center, 525 Fairview St., while both protesters and supporters gathered outside.

“In a very real sense before this pandemic started we were well on our way to making American great again,” Pence said while visiting the Rajant Corporation, a technology-based company in Malvern, Pa.

“In the days ahead we have an agenda that will get this economy back and then some; bring us back better, stronger and more prosperous. In a word, we’re going to make America great again – again.”

The Trump campaign held its national Women for Trump bus tour, which included a stop at the Republican Committee of Lancaster County.

Lara Trump, along with Republican advisers Mercedes Schlapp and Katrina Pierson, got off the bus at the county party building to speak with volunteers phone banking for President Donald Trump. Lara Trump is married to President Trump's son, Eric.

The bus tour, aimed at gathering support among women for President Trump's administration, is planned through Election Day.

Ivanka Trump, the eldest daughter of President Trump and a senior White House adviser, made a campaign stop at a Lancaster County food bank in Sept.

Ivanka Trump toured space's volunteer packing area, where a dozen or so volunteers were packing cartons of ricotta cheese, and its refrigerated food storage area, for about 20 minutes. She thanked the volunteers for their work as she walked by, stopping to take a selfie with one of them.

“You should be so proud of the work you’re doing here. It’s amazing,” Trump told a group of volunteers after the tour, before taking a group picture with them outside.

Former Vice President Biden visited a Lancaster Township home to speak with a group of union workers to discuss the importance of unions in America’s workforce, as part of a Labor Day trip to Pennsylvania.

Biden met with three U.S. Army veterans from Pennsylvania who transitioned into union jobs through apprenticeships following their service, as well as a union leader.

“We need you to be our next president,” said Patricia Bowermaster, an American Federation of Government Employees Local 1156 member and U.S. Army veteran.

Vice President Pence touched down on Air Force 2 at Lancaster Airport at 4:40 p.m. on Sept. 29 to attend a presidential debate watch party at Meadow Spring Farm in Lititz.

Pence also took a few shots at Biden, criticizing his changing stances on fossil fuels and his belief that systemic racism exists.

If re-elected, Pence said his administration will “continue to achieve American energy” independence.

“[Trump] is defending Pennsylvania’s farmers and agriculture,” Pence said at the event, which was held at Acorn Farms and attended by about 120 people.

Karen Pence ran through a list of the Trump administration’s accomplishments, stressing the new trade agreement with Mexico and Canada and how it grows Pennsylvania’s market access in Canada and ended that country’s “unfair” milk pricing program.

President Trump spoke for 90 minutes to a crowd of several thousand gathered on an overcast Monday afternoon at the Lancaster County Airport, delivering a speech that leaned heavily on his greatest hits -- calling his opponent “Sleepy Joe,” blasting President Obama for surveilling his campaign four years ago, blaming the “fake news” media for bad press about him, celebrating the border wall and boasting of the big tax cuts his administration delivered.

Other than a mention of the industriousness of the Pennsylvania Dutch and a callout to U.S. Rep. Lloyd Smucker, the president said little about Lancaster County specifically, delivering instead a speech that seemed more appropriate for crowds in the energy producing parts of the state.

First Lady Melania Trump stopped in Lancaster County on Tuesday afternoon, as she hit the campaign trail in southeastern Pennsylvania, stumping for the re-election of her husband, Republican President Donald Trump.

After landing at the Lancaster Airport near Lititz, Melania Trump traveled to Atglen, Chester County, for a speech before a crowd of cheering supporters, lauding her husband for his achievements and decrying his Democratic opponent, former Vice President Joe Biden. (Click here to watch the speech.)

The day President Trump was impeached, he and Pence were in Hershey rallying for his 2020 reelection campaign.

“A regular president would’ve been under the table, thumb in the mouth saying, 'Take me home, mommy,' " Trump said about Democrats’ opposition to him during his presidency at the Hershey rally.

"They're impeaching me, do you know why? They want to win an election," he said.

Trump talks trade, Pa. and 2020 campaign in Hershey on night of impeachment filing

UPDATE: You can read about Melania Trump's visit, which included a visit to the Lancaster Co…

President Donald Trump has narrowed the gap in the final month of the presidential campaign, but Democrat Joe Biden continues to lead in Penns…

Ivanka Trump visited Lancaster County on Sunday night as part of the Trump campaign’s final pitch to voters ahead of Election Day on Tuesday.

As President Donald Trump rallied in Reading on Saturday, about 100 of his supporters gathered an hour south, in Buck, to caravan 66 miles thr…

Here's where you can get 2020 Lancaster County election results