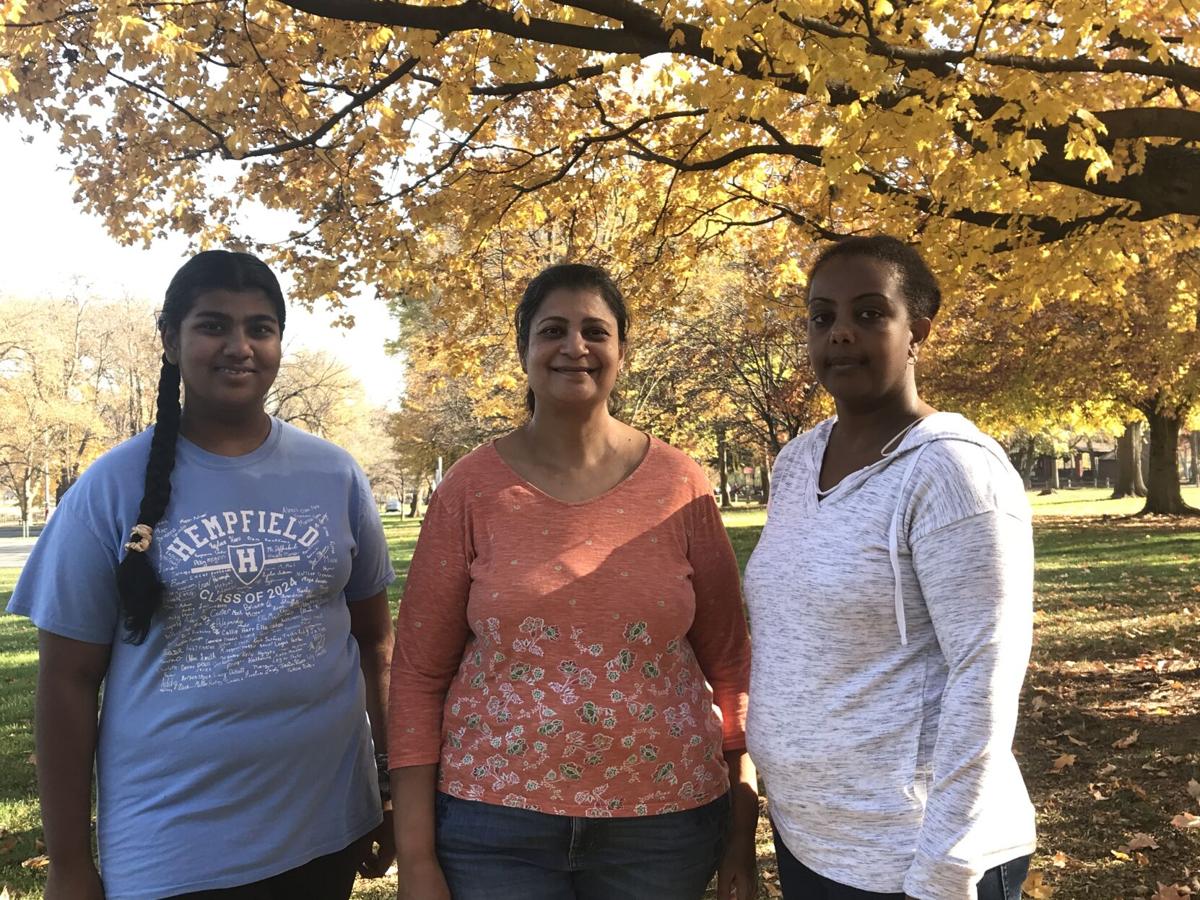 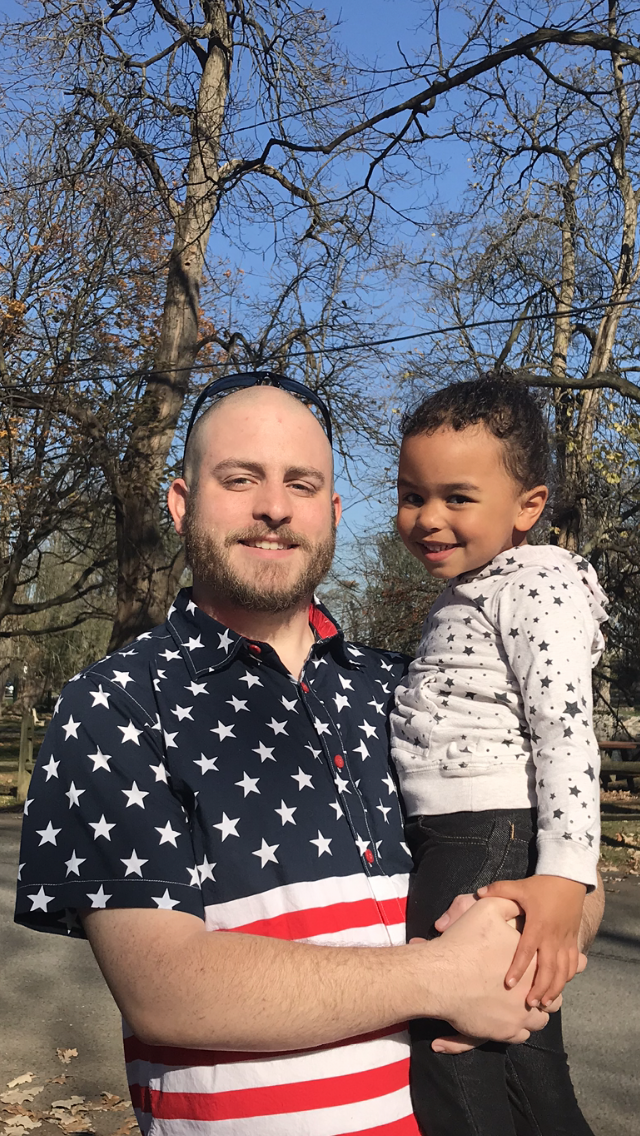 Blaec Toncini, of West Lampeter Township, with with daughter Harper, at Long's Park on Sunday, Nov. 8, 2020. 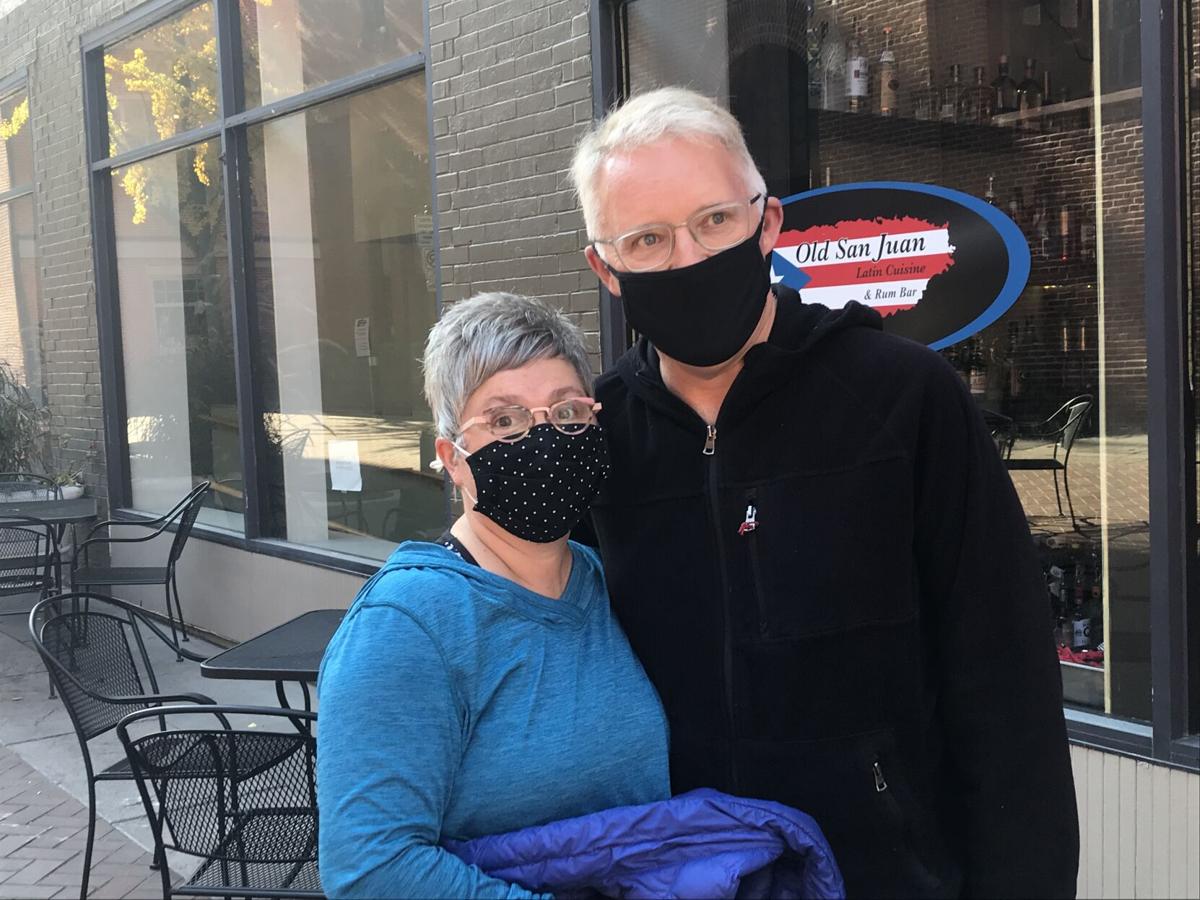 Jimm and Kaylene Derksen, of Lancaster Township, in downtown Lancaster, on Sunday, Nov. 8, 2020.

Blaec Toncini, of West Lampeter Township, with with daughter Harper, at Long's Park on Sunday, Nov. 8, 2020.

Blaec Toncini intentionally chose to wear a shirt that evoked the United States flag when he dressed Sunday.

The top half was blue, with white stars, the bottom half, red and white striped.

The 29-year-old engineer from West Lampeter Township was happy that Joe Biden and Kamala Harris had been elected president and vice president.

“I think it kind of shows actions matter and words matter and people are sick of hearing vitriol from our president,” said Toncini, who was enjoying a sunny day with his wife, Zari, and 4-year-old daughter, Harper, at Long’s Park.

Zari’s shirt, which read “United we stand” was an intentional choice as well.

The interracial couple - Blaec is white, Zari, 25, is Black - said they are hopeful that Biden and Harris can work to unite a country so divided.

But, Blaec said, he’s not “naive enough to think people will change their nature.”

After all, under Trump’s presidency, Blaec said, people have felt emboldened to espouse racist views they might otherwise have kept to themselves.

A couple weeks ago, shortly after putting up a Biden sign in their yard, the Toncinis said their dog was poisoned, and one of their neighbors received an unsigned letter that used a racial slur for Black people and which said people of color should leave.

They couldn’t say for sure whether the poisoning and letter were connected to putting up the political sign, but Blaec noted the timing was suspect. He had a security camera installed.

Still, they realized history was being made with the election of the first woman, and woman of color, as vice president.

“We’re just hopeful. We’re happy,” said Zari, who is a veterinary nurse. “It was such a big moment.”

Other Lancaster Countians interviewed Sunday also expressed cautious optimism at what Biden and Harris might achieve.

No, Lancaster County did not count more mail-in ballots than it received

In another part of Long’s Park, Neeta Dedhia, 46, and Timnit Mengistu, 41, both of East Hempfield Township, shared their thoughts.

Dedhia, who voted for Biden, said she was worried Trump’s legal challenges and other such obstacles could sow discord. “I’m really hoping that President Trump concedes gracefully,” she said.

Dedhia, an office manager at Safe Communities, a nonprofit that works to stop child sexual abuse, was thrilled with Harris.

“I think she will be a role model,” she said, noting the firsts Harris brings to the post: Woman. Person of color. Daughter of immigrants.

“I see my daughter … It’s like breaking the glass ceiling” she said.

“It gives us hope that as a female, you work hard you can be the vice president of our country,” she said.

She echoed Dedhia’s concerns that lawsuits could drag out the inevitable.

“I wish everyone respects that the people have spoken,” she said.

Besides working to bring the country together, Biden must focus on defeating COVID-19, she said.

Dedhia added the country must continue to address issues of racism. That work, she said, must continue at the grassroots level and not simply be handed down by elected officials.

In downtown Lancaster, Jimm and Kaylene Derksen, were also pleased that Biden and Harris had won.

They lead The Soul Care Institute, a Christian nonprofit.

“We’re relieved,” said Jimm, 54. He said he felt Trump was taking the country off course and damaging America’s relationships with other countries.

With Biden, he said, “I think we’re saying to the world: We’re with you. We’re not on our own.”

Kaylene, who is white, said she voted for more than just her own interests.

“I voted for myself and, more than that, for my friends who are Black, who are brown, who are refugees, who are immigrants,” she said, explaining she feels they would fare better under Biden and Harris than under Trump.

They did not understand Trump’s appeal to Christians, finding his behavior troublesome and referred to the Bible verse in the book of Matthew, “By their fruits ye shall know them.”

Josh and Krystal Weber, another interracial couple from West Lampeter, also used the word relieved to describe their feelings.

“I could not have lived under another four years of Trump,” said Krystal, 24, who is Black.

Trump “made white supremacy acceptable,” said Josh, 26, who is white, and added he and his wife were “tired of the racism, tired of the xenophobia.”

Smucker calls on Trump to accept election results once certified, top state officials to recuse themselves from investigations

And that won’t instantly disappear, given how close the election was: “There is a whole half of the country that supports his belief. There’s no way you can mask how he feels,” said Josh, a graphics designer.

Biden wasn’t the Webers first choice: Bernie Sanders was. Still, they were optimistic that Biden and Harris could work to unify a divided country.

“I’m happy, but there’s still work to be done,” said Krystal, listing concerns including police reform, racism and the need for diversity training.

Andy Bollinger, who hosted a debate watch party at his Meadow Spring Farm in Ephrata Township during which Vice President Mike Pence spoke in September, said accepts that the election was fair and that voter fraud was not an issue.

“It would have taken a wide-scale effort for that to have taken place,” he said.

He declined to speculate on why Trump may have lost, but said “I am glad that Republicans still control the Senate. I feel like there will be a nice balance of power with how the election is shaping up."

'Action is required from all of us': Lancaster County officials urge caution as COVID-19 cases rise ahead of holiday season

Pa. vote count Q&A: Why did it take elections workers so long to count mail-in ballots?

You might have wondered: What’s happened in Pennsylvania over the past few days?

This article is made possible through Votebeat, a nonpartisan reporting project covering local election integrity and voting access. This arti…