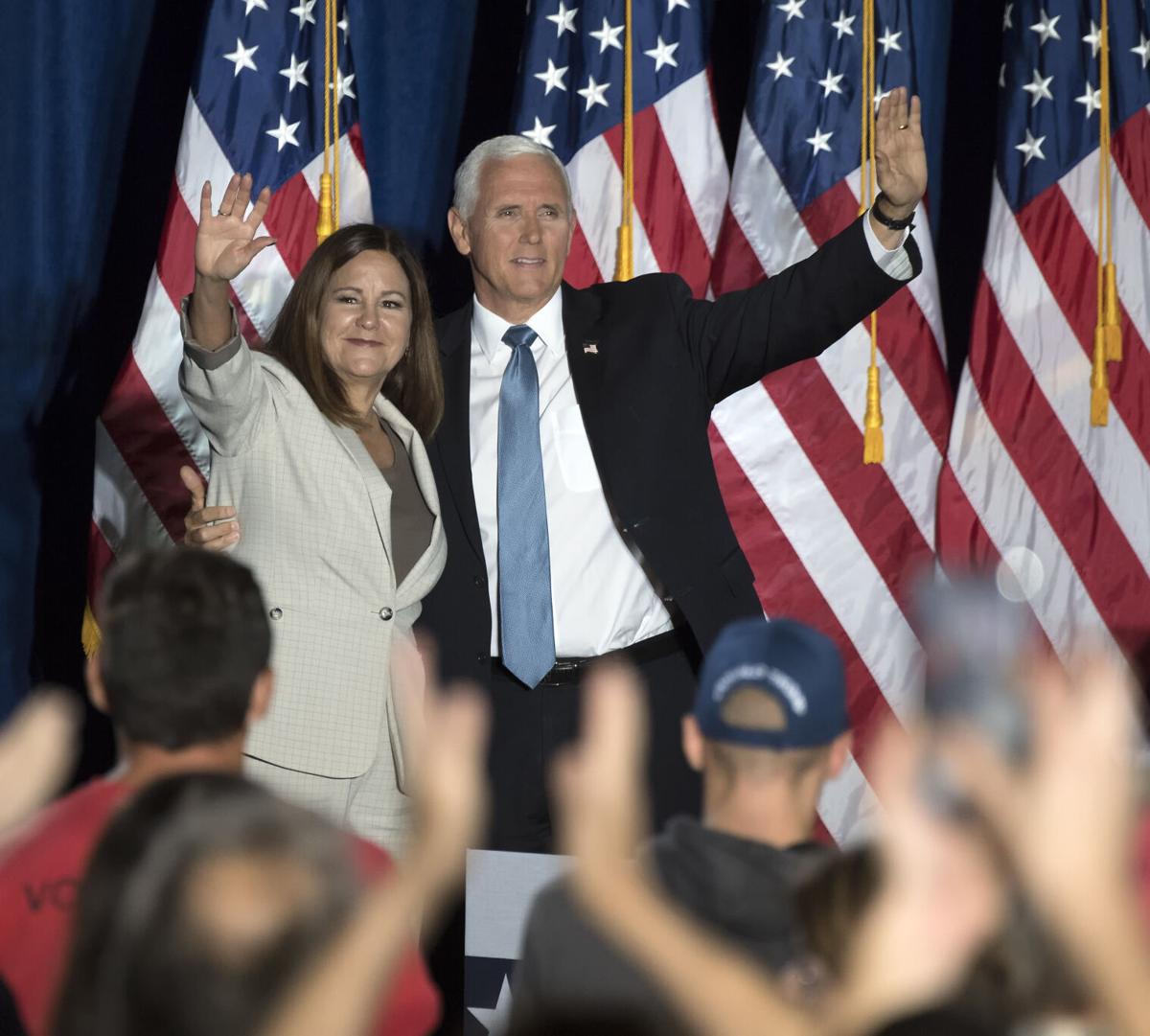 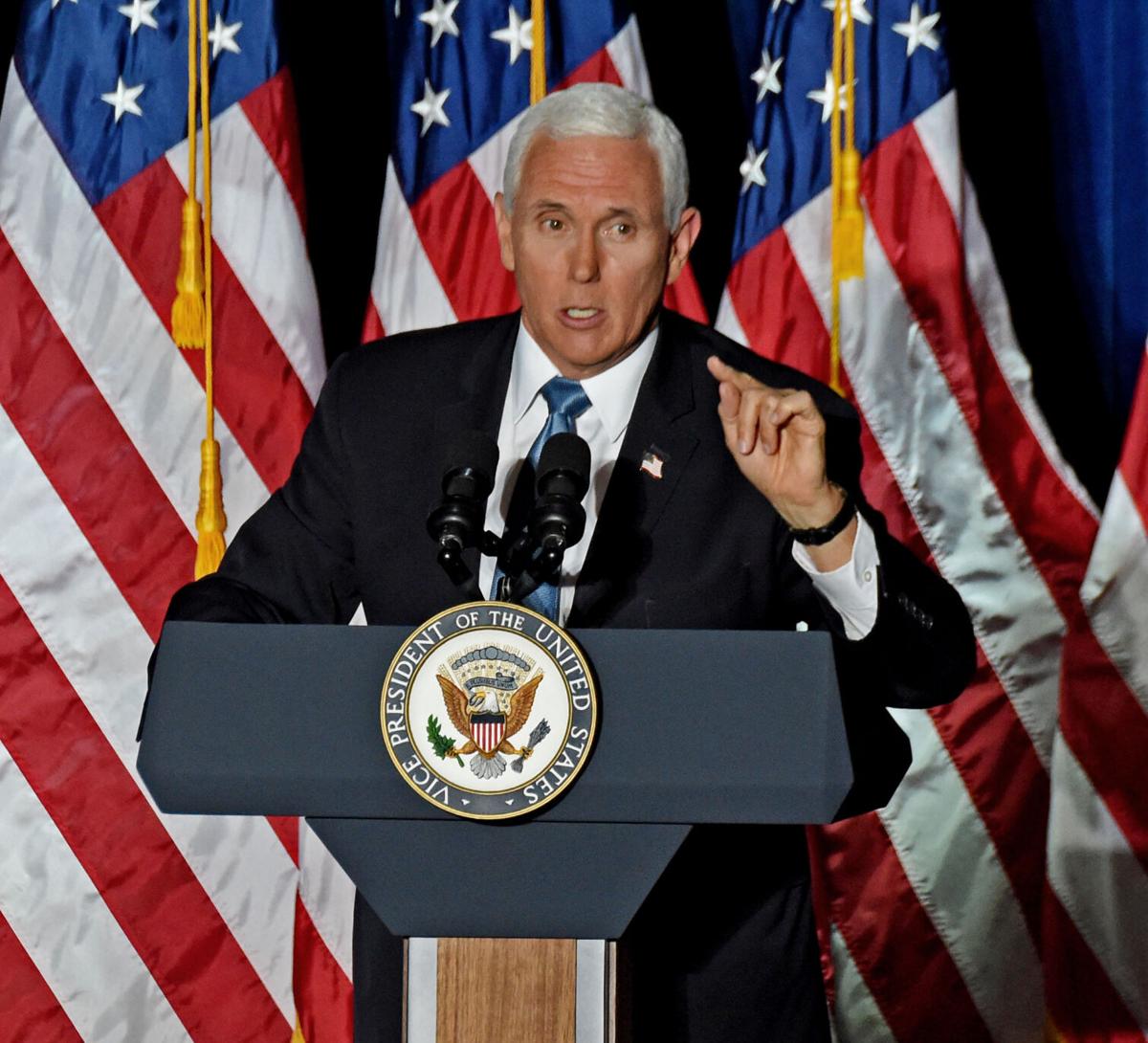 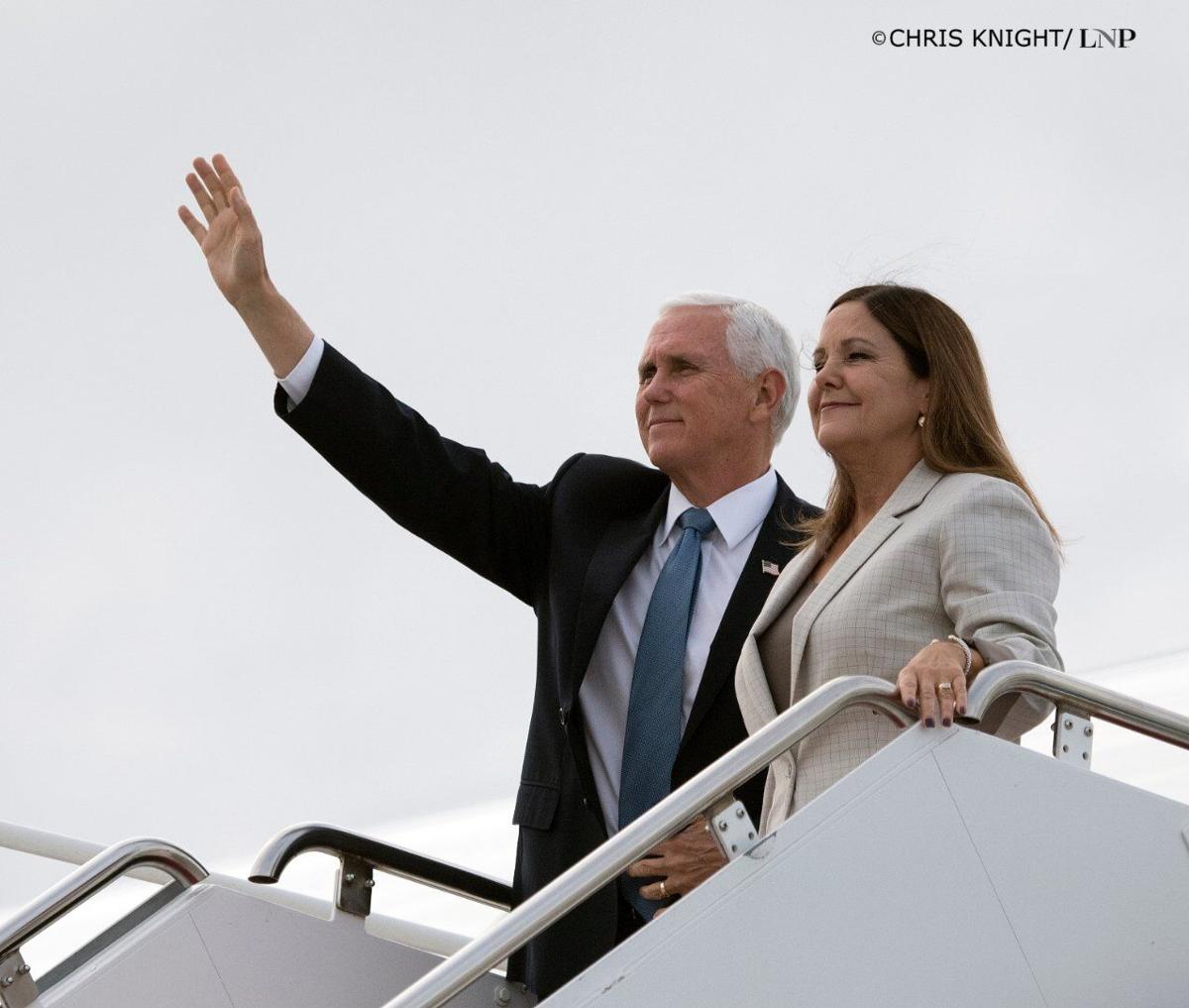 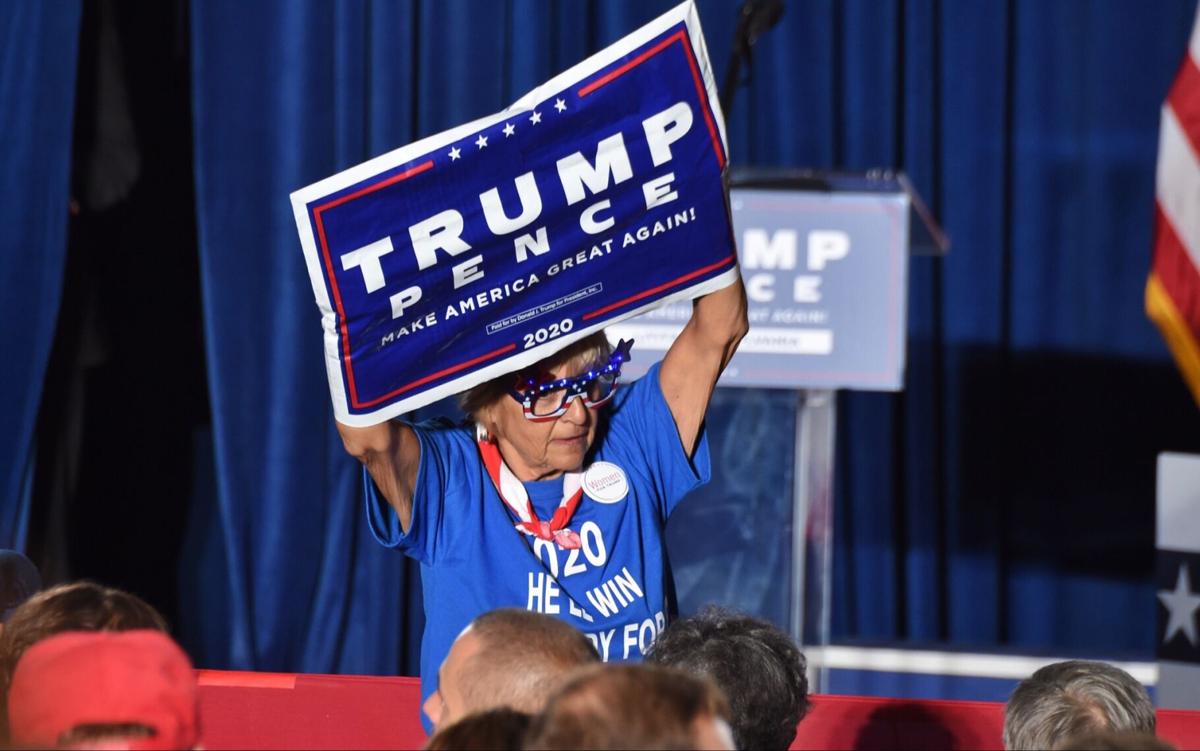 President Trump supporter holds up 'Trump/Pence' sign during the playing of the National Anthem. 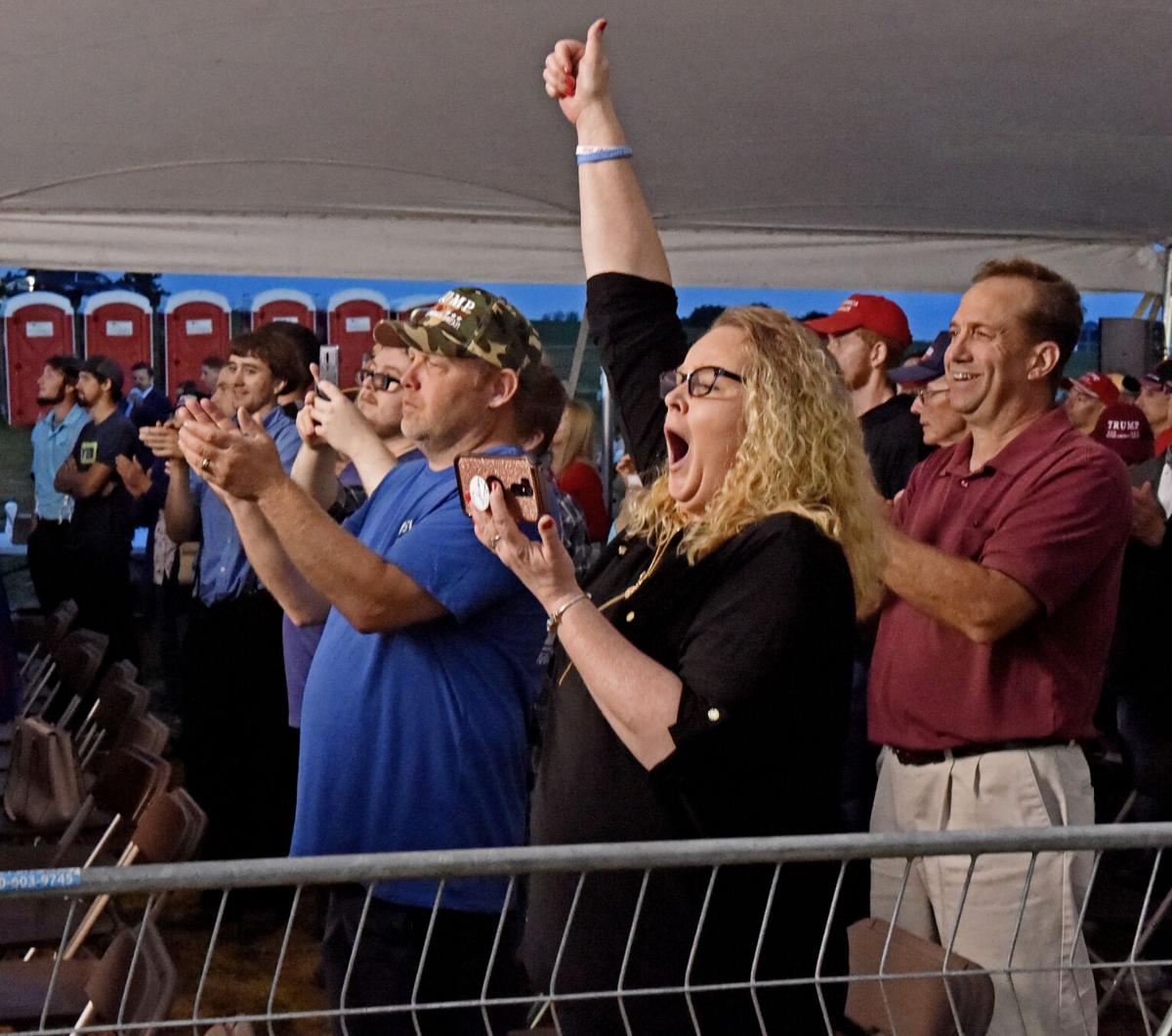 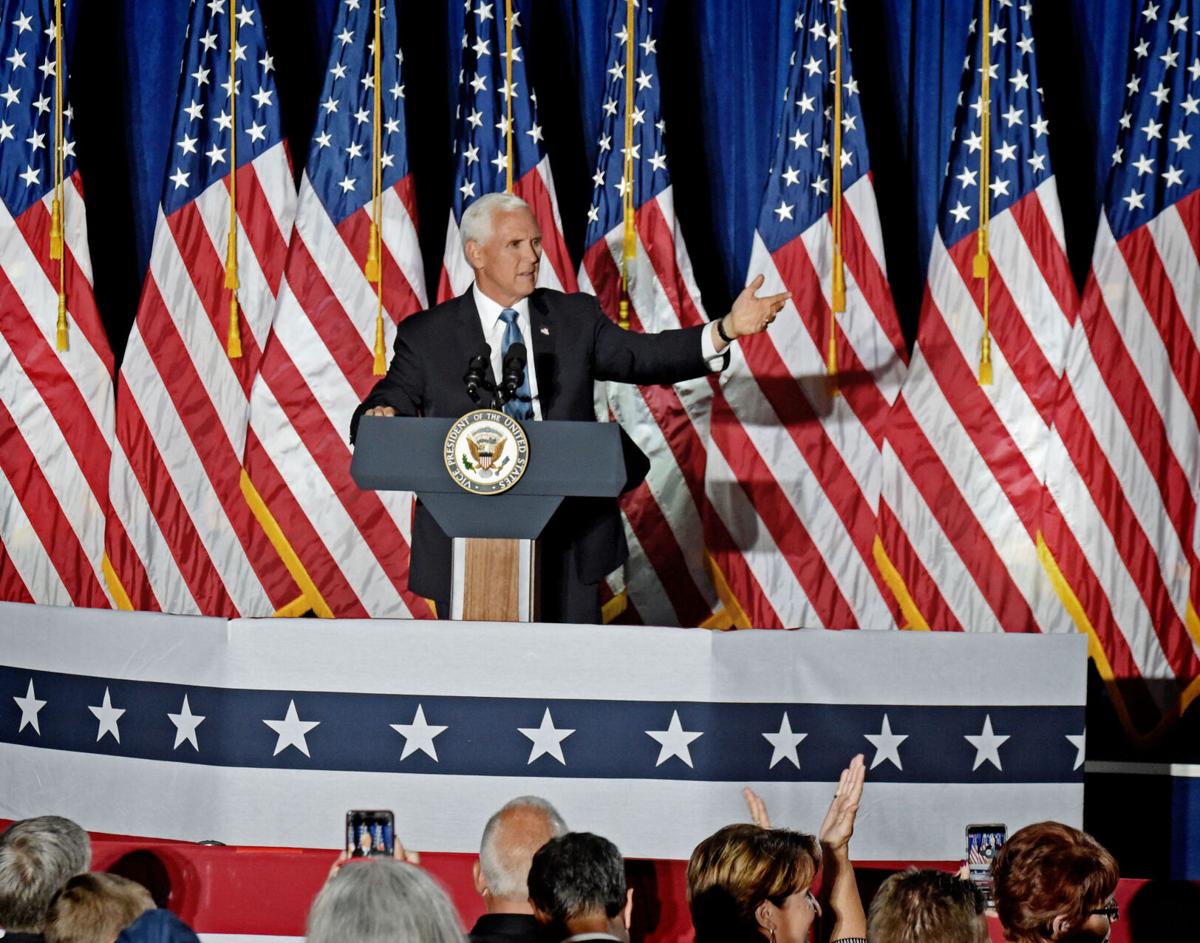 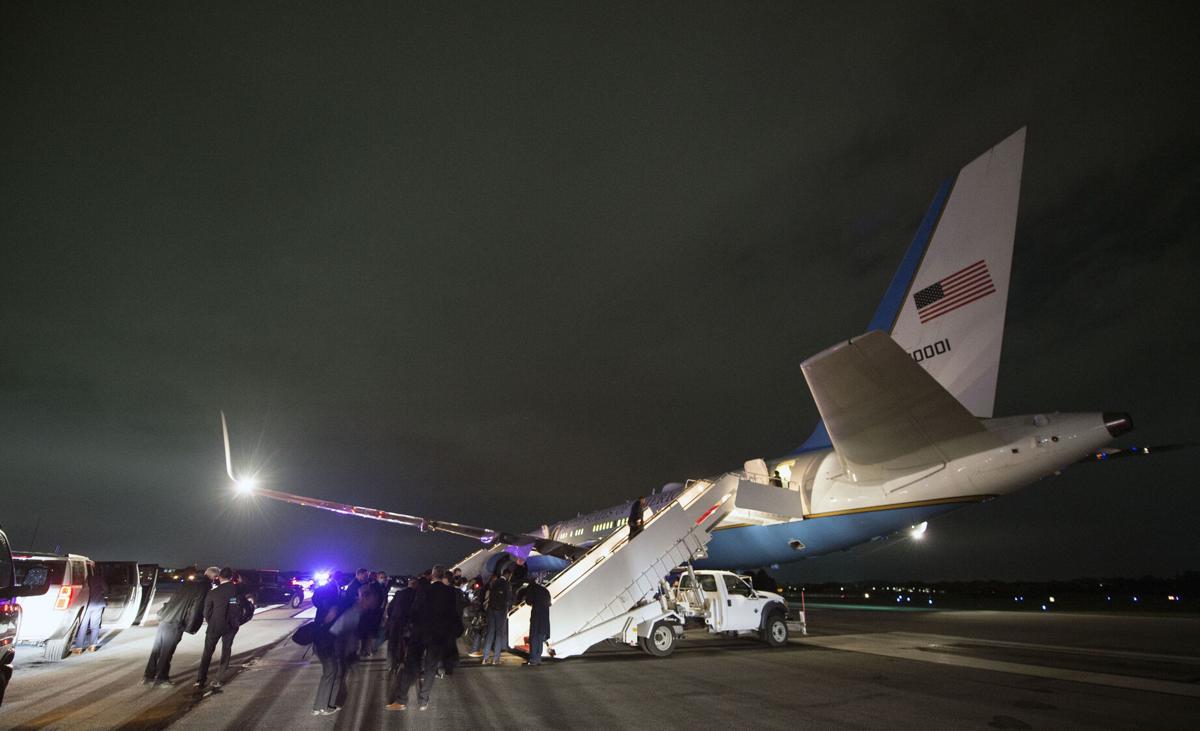 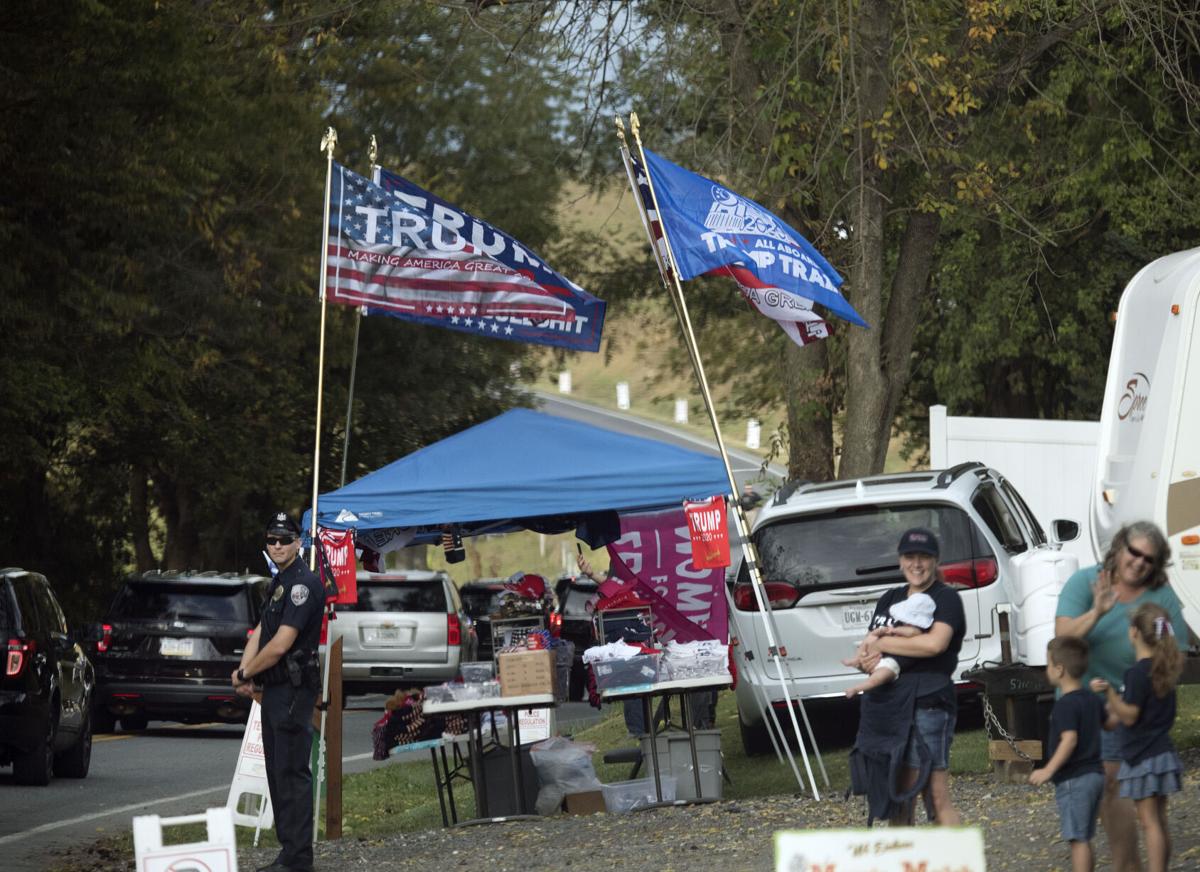 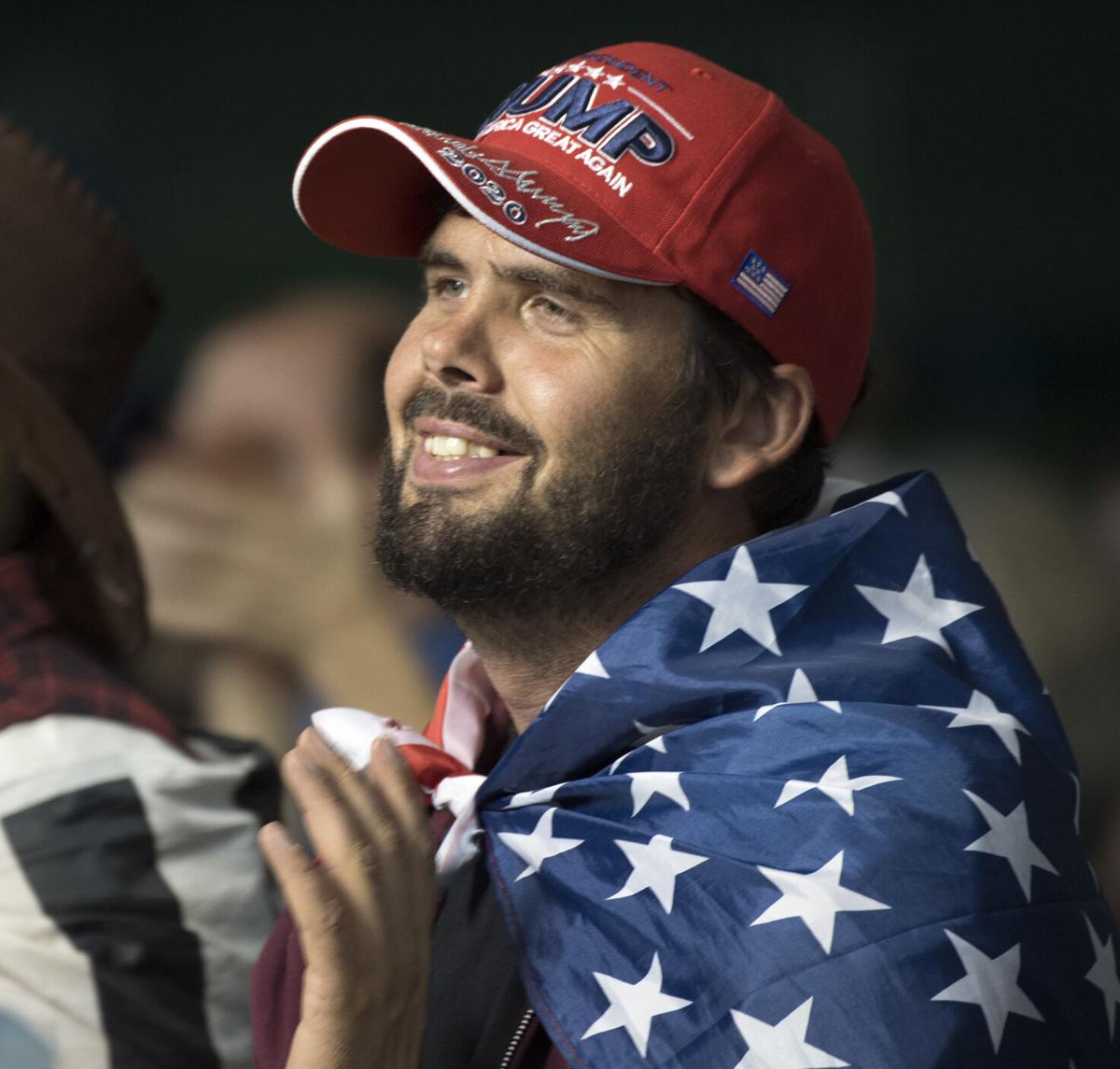 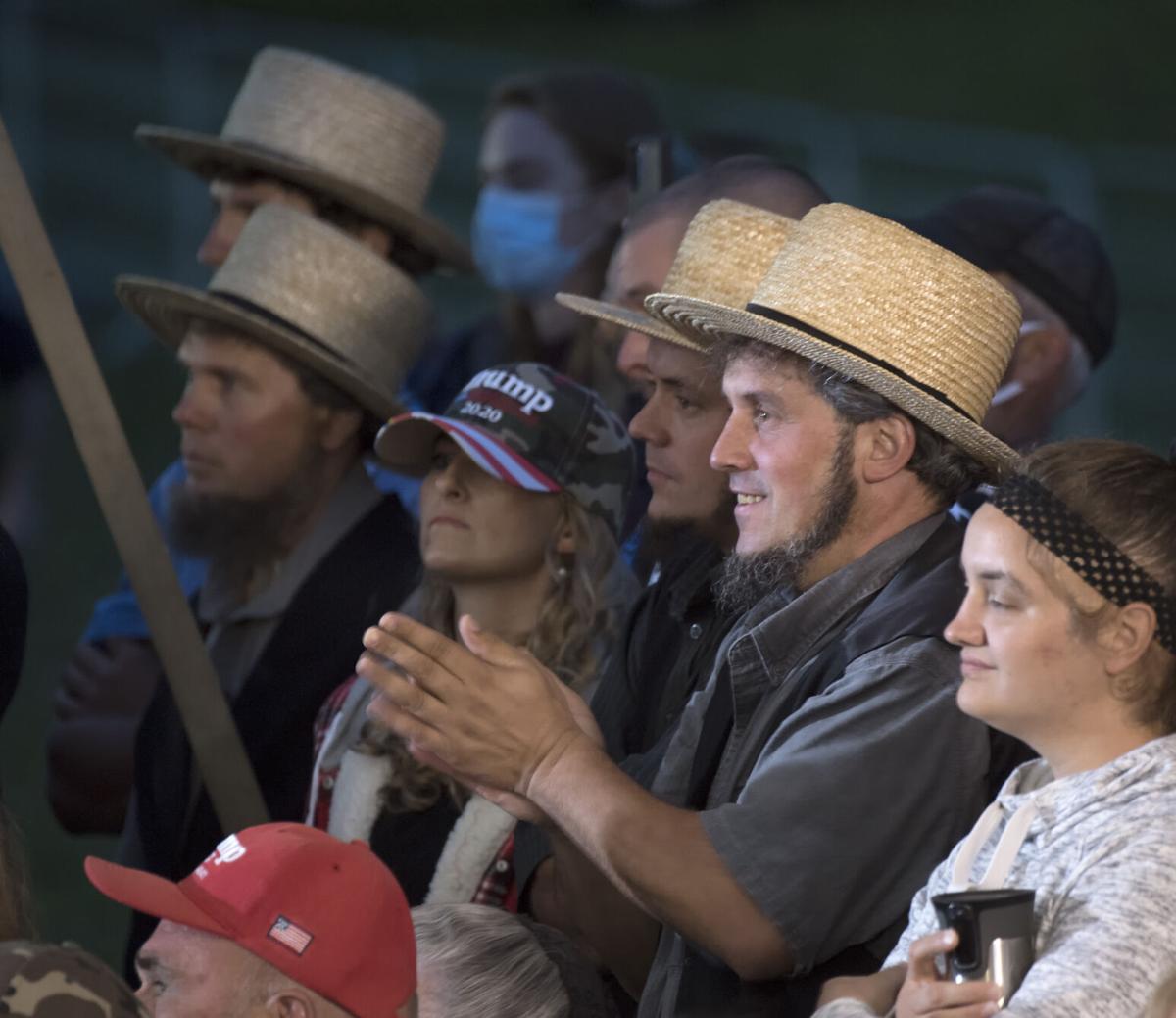 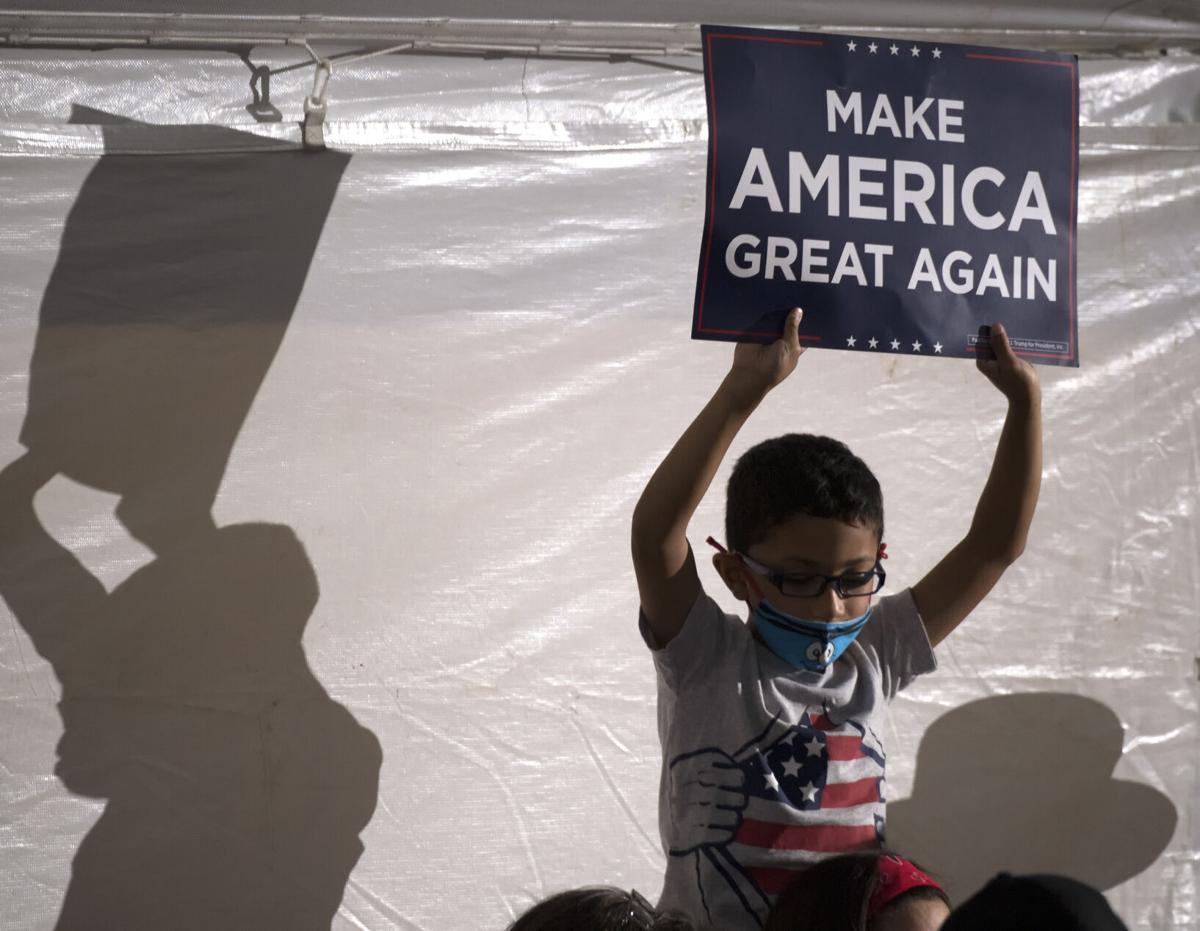 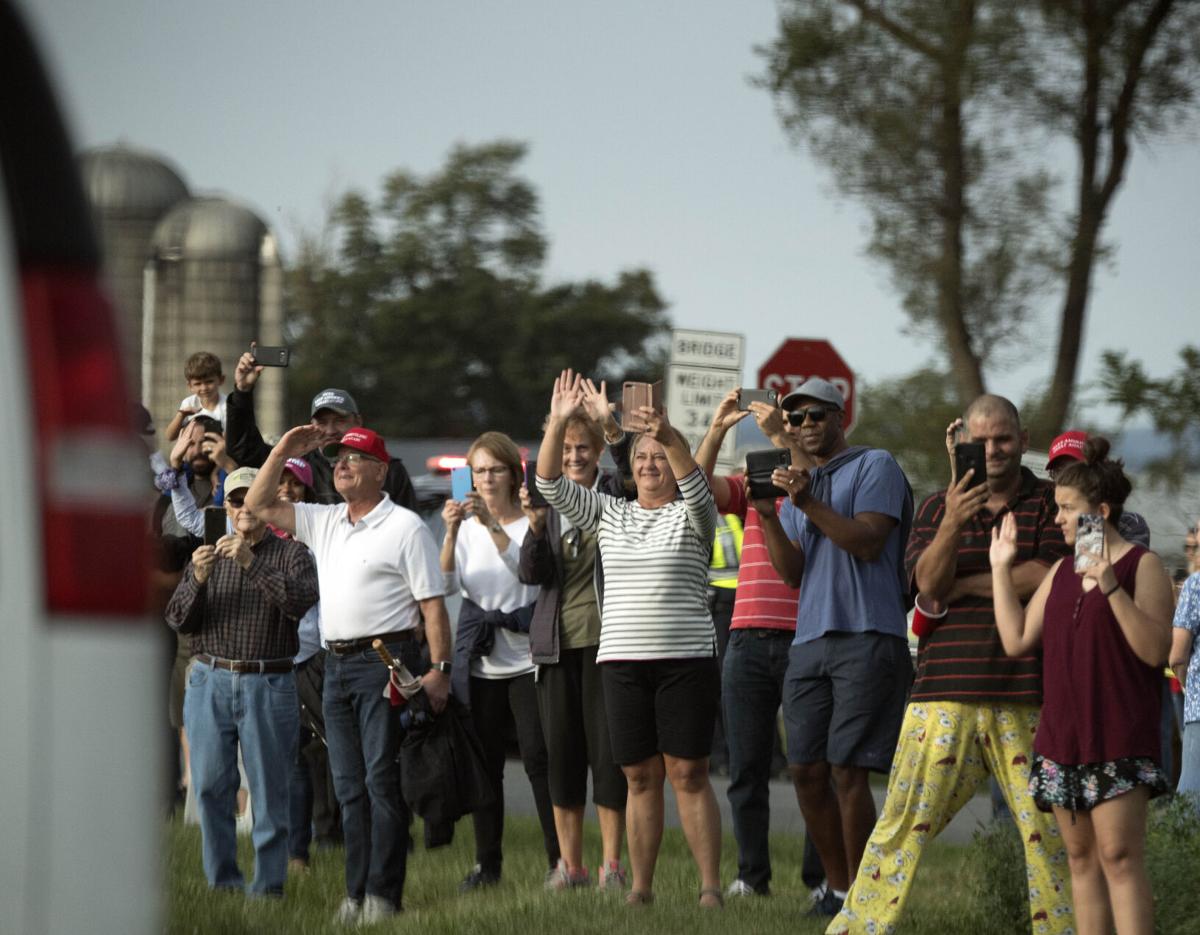 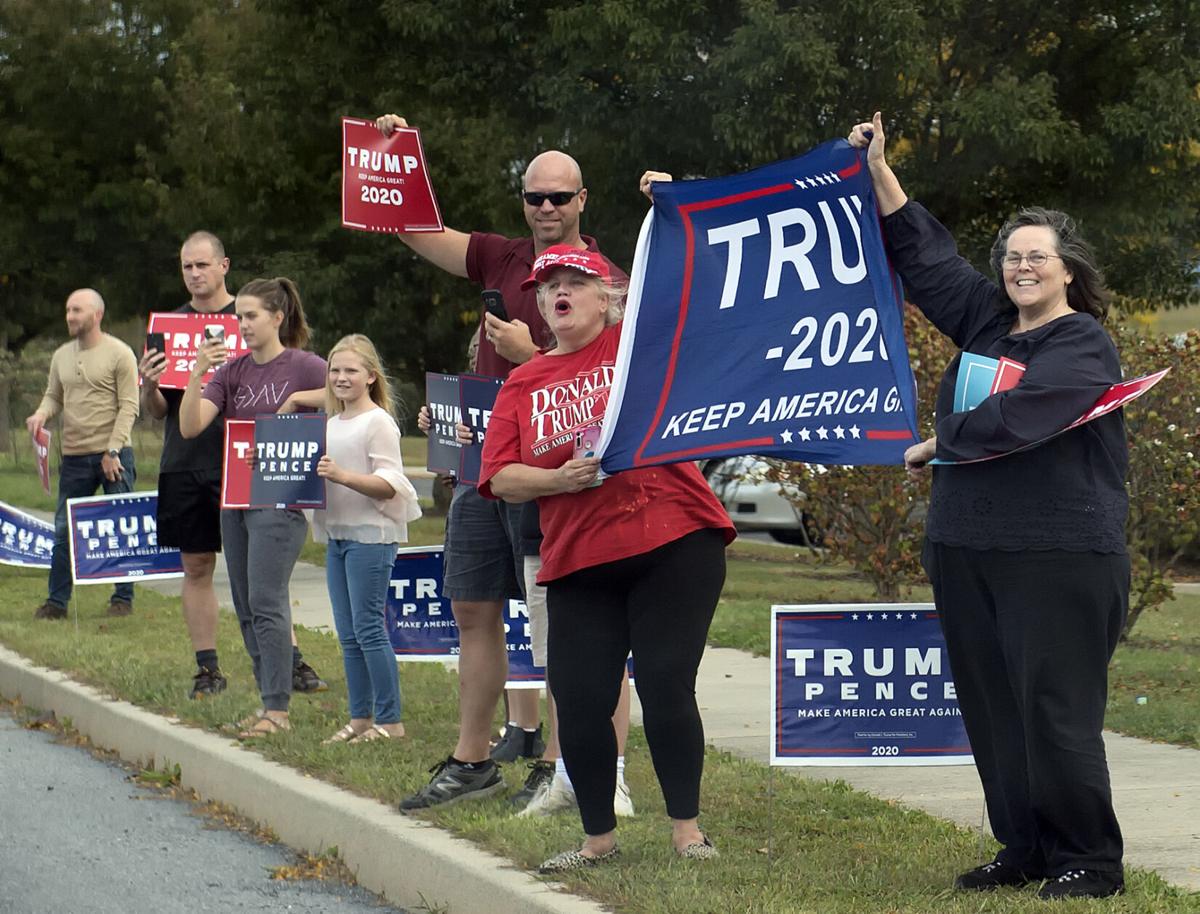 The crowd, sitting under an open-air tent and wearing a wide range of Trump paraphernalia, cheered Pence’s remarks, reacting strongest to the vice president’s mention of Judge Amy Coney Barrett’s nomination to the Supreme Court and his promise that the president will continue to support and defend police and first responders.

Pence spoke just hours before President Trump was scheduled to meet former Vice President Joe Biden in Cleveland in the first 2020 debate. The debate watch party was hosted by Andy Bollinger at his Meadow Spring Farm in Ephrata Township, 5 miles east of Lititz.

Introduced by Second Lady Karen Pence, the vice president entered the tent as “All Right Now” by Free blasted on the sound system. He began by promising that the president is “going to take the fight straight to Joe Biden” at the debate.

“People will ask me, ‘How long has the president been preparing for the debate?’” Pence said from the stage at a Lititz, Pennsylvania farm. “All his life.”

“After you see the debate tonight, you’ll forget I was even here,” Pence said later in his remarks.

“Pennsylvania and America need four more years of President Donald Trump in the White House. The road to victory goes straight through Pennsylvania,” he said.

The crowd gave Pence a standing ovation as he discussed past riots and looting in United States cities. He and the president support the First Amendment and the right to protest, he said, continuing:

The crowd also celebrated when Pence mentioned Tuesday’s announcement that the Philadelphia Firefighters' and Paramedics' Union, Local 22 of the International Association of Fire Fighters, had endorsed Trump. In doing so, the Philadelphia local broke with the International Association of Fire Fighters, which had already endorsed Biden.

Near the end of his remarks, Pence asked the crowd to “pray for victory.”

Pence departed Meadow Spring Farm before 7:45 p.m.., heading back to the airport for the return flight to Joint Base Edwards outside Washington, DC. Air Force Two was in the air at 8:13 p.m.

The crowd started gathering at the farm hours before Pence’s arrival. Two food trucks served milkshakes and barbecue to attendees, most of whom were dressed casually, including many wearing Trump t-shirts and red “MAGA” ball caps. Several in the crowd were dressed in traditional Amish or Mennonite clothing (hair bonnets and straw hats), and few in the crowd wore face masks as a precaution against COVID-19.

A few hundred chairs were set up in haphazard rows under the large, open-air tent, which was erected on an alfalfa field within easy sight of the farm’s milking bars and silos. A stage was set up on one end of the tent, with a podium, nine American flags and two large “Make America Great Again” banners as backdrops. Two large projector screens flanked the podium. Away from the tent, a half dozen red portable restrooms were available to guests.

While waiting for Pence to arrive, a pastor delivered a prayer, followed by a reciting of the Pledge of Allegiance led by county Commissioner Josh Parsons. Commissioner Ray D’Agostino was also in the crowd.

U.S. Rep. Lloyd Smucker, who traveled to the event with Pence on Air Force Two, stressed the importance of Pennsylvania to the president’s re-election campaign.

“Everyone here understands that pathway to victory runs right through where we are standing tonight,” said Smucker, a Republican who represents Lancaster and southern York counties in the battleground state of Pennsylvania.

The crowd cheered and chanted “four more years” after Smucker praised the president’s nomination of Amy Coney Barrett to the Supreme Court. “President Trump has kept his promises. He’s just fulfilled another promise for the third time,” Smucker said of the nomination.

Andy Bollinger welcomed guests to his farm. “I feel very privileged to be hosting this … we hope that you have a lot of fun. And a quick plug for dairy farmers: Just remember to drink your milk everyone,” he joked, before turning the stage over to Second Lady Karen Pence

Karen Pence entered the tent to the sound of Pat Benator’s “Hit Me with Your Best Shot” playing. She introduced her husband to the crowd, telling the story of Pence’s first campaigns for Congress in 1988 and 1990.

In those campaigns, she said, Pence ran on a single theme: Faith, family and freedom. He lost those races. When he ran again in 2000, he stuck to that theme and won.

“President Trump has shown us over the past four years that he is fighting for our faith, our family and our freedom,” she said, before urging the crowd to give the president and her husband another four years in the White House.

Bobbie LeDuc and Anita Evans drove to Lancaster County from Delaware Tuesday morning. “We’re Trump supporters. We love Mike Pence and we can’t wait to watch the debate,” LeDuc said during the wait for Pence’s arrival.

LeDuc turned her focus toward ongoing protests and civil unrest following multiple fatal police shootings this year. “I want to see a return of law and order in America,” she said, decrying any protest-related vandalism.

“He is a nationalist not a globalist,” she said, adding that she wants Trump to make good on his promise to “continue building the wall” — referring to the border wall between the United States and Mexico. She said she attended President Trump’s campaign stop in Dauphin County on Saturday.

First-time voter Nathan Rybner, 19, of Manheim Township was among the few mask-wearers in the crowd. “I have a lot of worries about the country right now,” said Rybner. He referenced ongoing Black Lives Matter protests and his hope that the candidates will come up with a plan to address “the BLM riots.”

Unless there's a Biden blowout in the election, Pa. should prepare for unrest

“Conservatives are being silenced,” she said, offering that she often believes people like her “can’t speak our minds” without provoking “a lot of rage” from Democrats.

That’s why she said she’s done more research this election cycle. She said she is looking forward to hearing candidates discuss plans for economic recovery from the COVID-19 downturn. However, her mind is made up — she’s voting for Trump.

Pence arrived aboard Air Force II at Lancaster Airport, touching down about 4:41 p.m.

He and the second lady were greeted on the tarmac by state Rep. David Zimmerman of New Holland. Then they climbed into an SUV and proceeded by motorcade to the Meadow Springs dairy farm in Ephrata Township.

About 30 vehicles were in the motorcade, led by Pennsylvania State Police troopers on motorcycle. The motorcade numerous vehicles, including more than one van for the traveling press, black SUVs for the Secret Service, and two ambulances.

About a dozen or so people gathered alongside a fence by the runway ahead of Pence’s arrival, about 100 yards from the runway.

Sisters Emily and Katelyn Wallace of Lititz said they heard about the vice president’s arrival on social media and dashed over in hopes of seeing the plane land, but arrived too late.

Still, Katelyn, 10, said, “it was exciting to see the plane and security, and know that the vice president considered Lancaster County an important enough place to visit.”

The sisters, still too young to vote, said they are Trump and Pence supporters and that they planned to watch the debate.

Along the approximately seven mile trip from Lancaster Airport, small groups gathered along the road, holding Trump 2020 signs and waving at Pence’s motorcade.

Ahead of Pence's visit to Lititz and the debate, Pennsylvania Democrats hosted a press call featuring Cindy Jennings, a Lititz resident who lives nearby Meadow Spring Farms.

Jennings has an adult son with multiple disabilities. When she and her husband divorced in 2014, she was the primary caretaker for her son and unable to work a full-time job. But the job she had, she said, made her ineligible for Medicaid and the plans available on the Marketplace were too expensive.

Because Pennsylvania expanded Medicaid, she was able to access the healthcare she needed for her pre-existing conditions. She was also able to get a routine colonoscopy, where her doctor found pre-cancerous polyps.

"Without that healthcare I wouldn't have gone," Jennings said. "Who would take care of my sons?"

She said she believes that this will all go away if Trump is elected for four more years.

"A single mom and her two kids just moved next door. I want that safety net to be there for her," she said.

Brendan McPhillips, the Pennsylvania state director for the Biden campaign, criticized the Trump administration ahead of Pence's visit to Lititz in a statement for its COVID-19 response.

"Joe Biden and Kamala Harris have a robust plan to combat the pandemic and get Pennsylvanians back on their feet, and they’ll rebuild the middle class so families in Lititz can finally get a fair shot,” McPhillips said.

Both the Trump and Biden campaigns see Pennsylvania as critical to winning the election. The president won Pennsylvania by just 44,000 votes in 2016, and many observers say he will need to win every county that voted for him in 2016 -- including Lancaster -- to secure reelection. Both candidates and their surrogates have made almost weekly trips to the state in recent months, with Lancaster County becoming a top destination.

As in 2016, polls show the Democratic nominee leading in the race. A new Washington Post-ABC News poll has Joe Biden leading the president 54% to 44%. Last week, a Franklin & Marshall poll had Biden up 49% to 40%. But the Trump-Pence campaign believes those polls don’t accurately reflect their support in the Keystone State, and the campaign is pulling out the stops to boost voter turnout in central Pa. On Sept. 4, Ivanka Trump visited the Blessings of Hope food bank in Leola. Biden met with union members at a home in Lancaster Township on Labor Day and was in Lancaster city earlier in the summer to talk with a small group of voters about health care and to deliver a televised speech.

Pence was last in Lancaster in July, making a quick stop to wave to supporters along Lititz Pike while on his way to a Manheim farm for a fundraiser and later for a bus tour that took him to the Philadelphia area.

Correction: An earlier version of this story incorrectly stated the name of the farm where the event took place. It is at Meadow Spring Farm. It also spelled the name of Bobbie LeDuc incorrectly, which has also been corrected.

The cramped front office of the York County Democratic Party is abuzz.

Pence-Harris debate: How to watch and what to know about the only VP debate before Election Day

Second lady Karen Pence will be in Mount Joy today

Second lady Karen Pence is scheduled to visit Lancaster County on Wednesday, less than two weeks before the Nov. 3 election.

Second lady Karen Pence visited Lancaster County on Wednesday for the second time in one month, this time to speak with voters at the Acorn Fa…

President Donald Trump spoke with voters in Lancaster County during a campaign rally on Monday ahead of Election Day, which is just over a week away.

Ivanka Trump visited Lancaster County on Sunday night as part of the Trump campaign’s final pitch to voters ahead of Election Day on Tuesday.

Second lady Karen Pence visited Lancaster County for the second time in one month, this time to speak with voters at the Acorn Farms Reception…