President Donald Trump, seen here campaigning at Lancaster Airport on Monday Oct. 26, 2020, was impeached for a second time Jan. 13 for inciting a violent insurrection at the U.S. Capitol on Jan. 6, 2021. 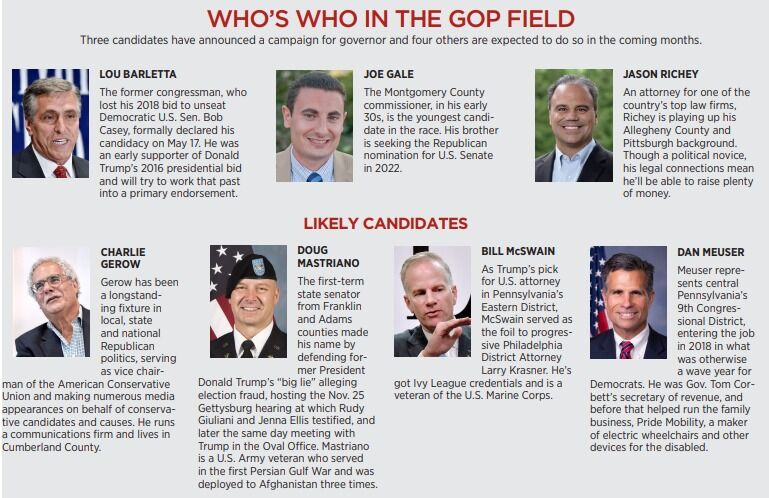 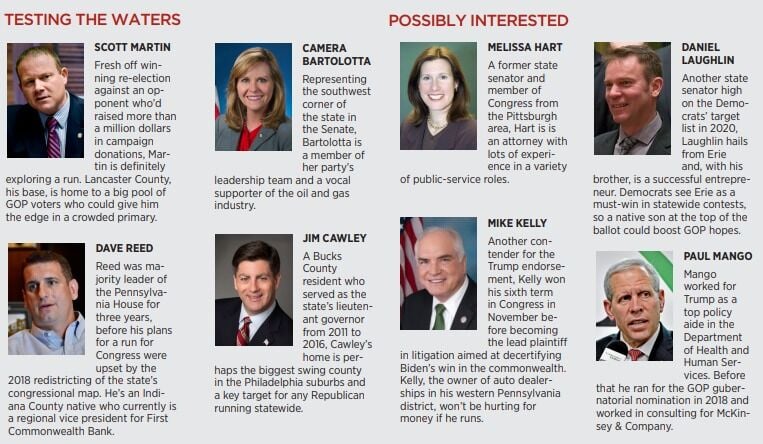 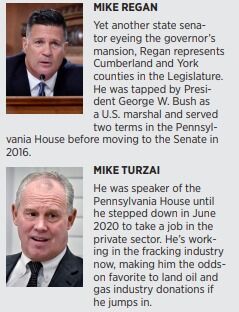 The winner of next year’s Republican primary for governor could be determined by whether former U.S. Rep. Lou Barletta or state Sen. Doug Mastriano holds the Trump card.

Both are favorites of Donald Trump, and both would have video and audio of events of themselves with the former president for potential TV or radio ads.

The key though, political insiders say, is if Trump actually makes an endorsement in the 2022 race.

It is, however, way too early to call the GOP primary a two-person race. There’s a handful of likely and declared candidates. A few others are testing the waters. At least 10 others are being mentioned by political insiders.

“I think the situation is fluid,” said Joseph DiSarro, chairman of the political science department at Washington & Jefferson College.

The Republicans range from political newcomer Jason Richey, a partner in the Pittsburgh-based law firm K&L Gates who has already announced a campaign, to U.S. Rep. Dan Meuser, former U.S. Attorney William McSwain and Harrisburg-based political consultant Charlie Gerow — all of whom are considering but have not announced a run.

Mastriano, who represents a broad swath of conservative central Pennsylvania in the state Senate, got 11 percent of the vote.

No other candidate got more than 3 percent.

Both Barletta and Mastriano also had the strongest name recognition; two-thirds of the voters surveyed had heard of them. Those numbers are less surprising for Barletta, a veteran politician, than they are for Mastriano, who first won elected office in May 2019 and whose surge in popularity in the party can be tied directly to his allegiance to Trump.

But one overlooked number in that same poll is good news for Mastriano and the other potential candidates: 60 percent of voters surveyed had no preference at this point, said James Lee, president and CEO of Susquehanna Polling.

Mastriano is a freshman state senator with no substantial population base (his district includes Adams, and parts of Franklin, Fulton and Cumberland counties) who emerged from obscurity after the November defeat of Trump by Democrat Joe Biden.

Trump falsely claimed the election was stolen and tried unsuccessfully to convince state election officials and lawmakers to reverse the results. Mastriano, a retired Army colonel, did more than any other lawmaker to sign on to litigation and resolutions to help Trump’s cause.

In November, Mastriano organized a Senate hearing in Gettysburg at which Trump lawyer and former New York Mayor Rudy Giuliani testified. Trump called into the hearing and was effusive with praise for Mastriano during and afterward. Since then, Mastriano has been the darling of right-wing national media and was invited to the White House. (He left after testing positive for COVID-19.)

Mike Mikus, a Pittsburgh-based Democratic campaign consultant, said his money is on Mastriano to get the former president’s backing. “He did a lot to ingratiate himself to Trump,” Mikus said.

Giuliani appeared at a fundraiser for Mastriano on May 15 in Mechanicsburg. “You got a real hero here,” Giuliani said about Mastriano, echoing a description voiced by Trump in December.

Mastriano met last week with Trump at Trump Tower in New York City and discussed the future of Pennsylvania, including the governor’s race, Mastriano told The Caucus in a rare interview with Pennsylvania media. He refused to disclose the contents of their conversation. He would not say whether they discussed an endorsement.

Mastriano told WEEO-FM in Chambersburg last week that Trump “had asked me to run some months ago. He said, ‘Doug, run and I’ll campaign for you.’”

Mastriano said Trump “is not happy with the Pennsylvania General Assembly at all” and might make some “strong remarks ... that could have ramifications on primaries” if the Legislature doesn’t pass the election reform he wants.

As for running for governor, “I think I am close to making a decision,” Mastriano said.

Barletta, meanwhile, has name recognition as a former U.S. Senate candidate, but the thumping he took from Casey — he lost by 13 percentage points in 2018 — raises questions about his viability with some GOP officials, Stewart said. “He (Barletta) didn’t raise much money in the Senate race. It’s been a knock on him,” said Stewart.

Attorney General Josh Shapiro is the only prospective candidate so far on the Democratic side.

Robin Kolodny, chair of the political science department at Temple University, said that’s because Shapiro has been running for 10 years. “Who doesn’t know the man wants to be governor?” she asked.

Shapiro is in his fifth month of his second four-year term as attorney general. Prior to that he served as a county commissioner and state House member from Montgomery County.

Shapiro has said he expects to run for governor. But he is not a declared candidate. He finished his race for his second term as attorney general last year with $2.7 million in his campaign account.

The prospective candidates are eyeing an open seat. Democratic Gov. Tom Wolf will leave office after eight years because Pennsylvania governors are limited to two terms. Based on history that means a large group of candidates is likely to run in the 2022 primary, said Berwood Yost, director of the Center for Opinion Research at Franklin & Marshall College in Lancaster.

It’s a midterm election, meaning the party not in the White House historically has an edge.

In a crowded field, a candidate could emerge as a Republican winner with 25 percent of the vote, Kolodny said.

A variable is Trump’s status within the party a year from now. Several polls have shown two-thirds of Republicans believe the November election was stolen.

But a criminal tax investigation is underway in New York and other lawsuits and probes potentially could impact Trump’s standing with voters.

Trump’s role in the runup to the Jan. 6 insurrection and his actions that day are likely to face further scrutiny at least by political opponents, if not by civil or criminal investigators.

Trump’s poll numbers may be low, but he continues to enjoy a sizable and loyal base. Nonetheless, Mastriano or other likeminded Republicans would face scrutiny for their support of Trump in the general election.

Mastriano organized a bus trip from Chambersburg to Washington on Jan. 6 but says he did not go inside the Capitol. He says he drove down with his wife and left early.

“January 6 and the Big Lie could be extremely damaging to Mastriano and other (Republican) candidates,” Mikus said. “Obviously, it gives him (Mastriano) a leg up in the primary.”

As for other gubernatorial candidates, Meuser said his decision to run is not finalized. But he said he is likely to run. A factor could be the shape of his district after reapportionment by the Legislature, he acknowledged.

Gerow was considered probable, but he refrained from public comment on entering the race. A decision is believed to be imminent for Gerow. Richey, the Pittsburgh attorney, announced his candidacy last week.

“I think it’s going to be interesting to see how this all shakes out, who raises the most money, who puts the most effort in,” said Maura Donley, co-host of “Behind the Headlines,” a cable TV show, and associate of the Susquehanna Valley Center for Public Policy. “From a purely name-recognition perspective, I think Lou Barletta has the edge, but if you throw Charlie Gerow into the mix, you’re getting someone with a depth of knowledge about Pennsylvania that is likely unmatched.”

This story ran in the May 25 issue of The Caucus, LNP Media Group's publication covering state government and politics. Follow The Caucus on Twitter @CaucusPA.

HARRISBURG — After refusing to release details about wasted coronavirus vaccine, citing a decades-old disease prevention law, the Wolf administration has reversed course and made public how many doses have been discarded by providers and why.

Every May, state legislators and other public officials are required to file reports detailing, among other items, whether they received pricey gifts, transportation, or hospitality from lobbyists, businesses, nonprofit groups, or others with a stake in government.

A look at Plerus, the election mail vendor Lancaster County wants to replace after ballot errors

U.S. Rep. Lloyd Smucker was fined $5,000 for failing to pass through a security screening on…

HARRISBURG — “Internal systemic failures” were behind the Wolf administration’s bungling of a statewide referendum that would provide legal recourse to survivors of child sexual abuse, according to a much-anticipated report released Wednesday.

A majority of Pennsylvania registered voters say they support “major changes” to the state’s election law, including photo identification and …

The Pennsylvania Senate's top elected Republican traveled to Washington, DC, last week to pitch the state's GOP congressmen on why he should b…