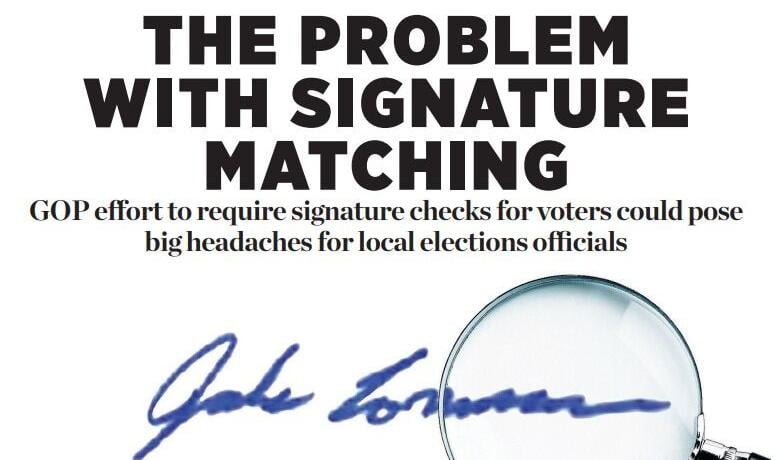 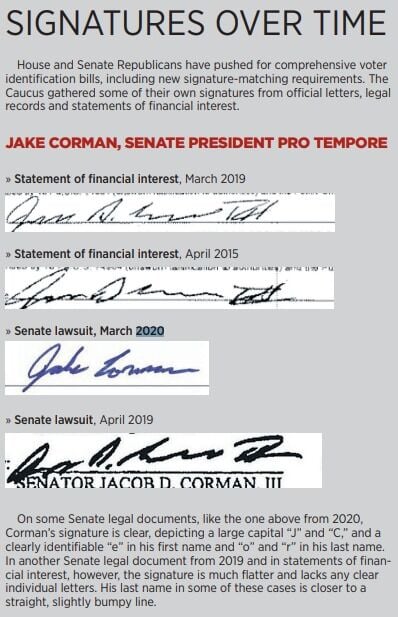 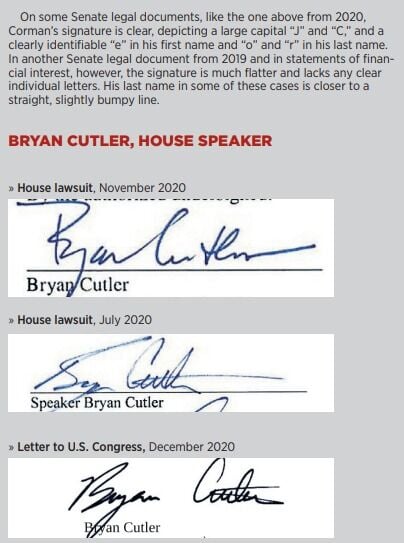 HARRISBURG — Matching the signatures of voters between their signed ballots and versions archived on other forms of ID is one of the centerpieces of Republicans’ efforts to enforce stricter voting measures in Pennsylvania and across the country.

The idea, according to some public opinion polls, enjoys broad public support.

But Democrats and elections experts say comparing a signature at a polling place to a previous signature on record isn’t that simple.

Signatures change over time. And even if there are several versions of a voter’s signature on file, technology and training are essential for election workers to be able to judge them accurately, the experts say.

Even some legislators’ own signatures might not pass the test.

“Currently we are not equipped to do signature verification. It would take years for resources to be put in place and for counties across the state to implement the process properly,” said Patrick Christmas, policy director at Committee of Seventy, a nonpartisan, nonprofit organization that works on elections issues.

Christmas said any policies created for voter identification must be applied consistently across the state because younger voters and voters of color are the ones who are reported to have higher ballot rejection rates.

“We definitely want to have an electoral process where every vote is counted,” Christmas said.

Last year, the state Supreme Court unanimously voted to prohibit counties from rejecting mail-in ballots based on the signatures on voter registration forms because there is no legal mandate for it in state law.

When Republicans included it in their Voting Rights Protection Act this year, Wolf swiftly vetoed the bill without trying to negotiate changes. Now, though, Republicans are set to reintroduce the legislation and continue negotiations. Signature verification is bound to be part of the talks going forward.

“With a swipe of his veto pen, Gov. Tom Wolf once again failed Pennsylvanians. From signature verification to requiring voters to show identification when voting, the Voting Rights Protection Act included initiatives supported by the majority of Pennsylvania voters,” Rep. Seth Grove, R-York, said in a statement in late July.

Grove did not respond to multiple calls and emails for comment. Jason Gottesman, House Republicans’ spokesman, however, confirmed that signature verification will be included in Grove’s reintroduced bill.

Wolf, while recently telling The Philadelphia Inquirer that he could support some form of voter ID, did not respond to questions from The Caucus specifically about whether he will support signature verification.

“The governor has said for more than a year that he is open to a conversation about what true election reform could look like, but House Bill 1300 was not a starting point — it was voter suppression masquerading as reform,” said Lyndsay Kensinger, Wolf’s spokeswoman.

Republicans are now pointing to a Franklin & Marshall College poll in June that found three-quarters of voters supported voter identification and 81% supported signature verification. Some Democrats, meanwhile, continue to say it’s just a waste of time.

“It is a very misguided solution to a problem that doesn’t exist. We have very few voter fraud cases in the commonwealth, if any. This is meant to discourage legitimate voters from casting their vote by jumping through unnecessary hoops,” said Rep. Robert Freeman, D-Northampton.

The Caucus’ review of Republican legislators’ signatures over time shows some consistencies and some discrepancies.

The signatures, compiled from public documents like statements of financial interest, legal records and letters lawmakers signed in the course of their duties, show unique attributes for each legislator that are consistent over time, and others that change.

House Speaker Bryan Cutler’s signature, for example, sometimes features cursive writing that is clear and recognizable, while other times it contains a clear first letter followed by a line with no distinct letters. He also includes his middle initial on some occasions, but not consistently. The differences are visible in records signed within a few years of each other.

The signatures on record for Senate President Pro Tempore Jake Corman look distinctly different in some instances. On legal expense documents, for example, his last name appears with clarity, showing a large capital “C,” a circular “o” and clear arches for “r,” “m” and “n.” In other documents, like statements of financial interest, his last name is more of a squiggly line.

Records with Franklin County GOP Sen. Doug Mastriano’s signature show similar large, loopy capital “D” and “M” letters to start his first and last names, and with other letters showing continuity, like a slanted “i.” The versions of Mastriano’s signature reviewed by The Caucus all date from the last few years.

Elections experts say such signatures would be difficult, but not impossible, to verify at the polling place. While critics say signatures would be challenged for political purposes, specialists who work in elections say checking them could be a way to restore voter confidence.

“The important thing to think about is that what you want is people to have trust in the process,” said Thad Hall, director of elections and voter registration in Mercer County.

For signature verification to be successful, there needs to be more than just an original copy of a signature on file because it is common for them to evolve, Hall said.

“In order to keep the system accurate, there certainly needs to be access to multiple variants of signatures,” Hall said. This can be done by beginning with a record of a signature from the first time a citizen registers to vote, and updating it throughout their lifespans.

A bipartisan verification team would have to be recruited and trained for signature verification to ensure an accurate analysis during in-person voting, Hall said. Training can range from a few hours to days. Trainees would be taught to look at the unique ways that people write their signatures, such as shape, size of the letters and spacing. It also helps to have members in law enforcement as part of the training to provide more insight, he said.

Jeff Greenburg, a regional director of the National Vote-At-Home Institute and former Mercer County elections director, agrees with keeping several versions of a voter’s signature on file and said that signature verification is a good idea because it provides another layer of security in the voting process.

“Even myself, my signature hasn’t changed since I originally registered decades ago, but I know it looks different,” Greenburg said, making the point that his signature is slightly different every time he writes it.

House Republicans’ recent election reform effort comes after a first round of election law changes in 2019 — the first time Pennsylvania’s election code was amended in about 80 years. Act 77, as it became known, expanded mail-in voting, which was adopted by a large share of voters last year during the pandemic.

Although the 2019 law represents a compromise between the parties, Greenburg said that it did not include a “curing process” in which voters are permitted to correct their ballot if there are irregularities with the information they submitted. He said a top priority is to incorporate a curing process in legislation for voter identification, in case there is a dilemma with signatures. This curing process was included in HB 1300.

According to the National Conference of State Legislatures, 18 states that use signature matching also have a curing process, allowing more time for voters to fix any discrepancies and ensure that their ballots are counted.

Greenburg said voter education is also vital, ensuring voters understand the changes to the law and the importance of the signature verification process.

“The Secretary of the Commonwealth would develop an application for registered voters to update their signature of record, or to provide a medical assessment of signature inconsistency due to a medical condition,” said Mike Straub, spokesman for House Speaker Bryan Cutler. “Signature verification would be strengthened by requiring the use of AI (artificial intelligence) assistance in matching signatures and a system would be in place to capture and store signatures for use in matching voters’ signatures.”

Freeman, the representative from Northampton County, said he’d rather focus on extending the period for pre-canvassing — the process that allows counties to open and organize mail-in ballots before Election Day — by one or two weeks rather than focus on signature verification. Currently, county election workers can’t begin opening ballots until polls open on Election Day.

House Republicans’ previous version of their election bill, according to their own fiscal analysis, would cost nearly $92 million in combined one-time and recurring costs — including the signature verification aspects.

Christmas said the process for challenging any single signature for a voter during an election can cost from $10 to $30. The costs include the price of contacting voters and the time it takes for staff to verify different versions of the voter’s signature, according to a Bipartisan Policy Center review referencing costs in Washington State, where nearly all votes are cast by mail.

The Republicans’ bill would fund half of counties’ costs for electronic pollbooks, ballot processing machines and voting machines once every 10 years. But the Department of State said in a statement there also would be extended costs for counties to purchase ballot-processing machines with signature verification capabilities and cover training costs.

“Among the many defects” of the bill, department officials continued in the statement, it also did not specify or give guidance as to how the verification process should be conducted, which risks having the 67 counties implement it in different ways.

Colorado, which has used signature verification in its elections, has its own public guide to how its election workers carry out the process.

According to the guide from the Colorado secretary of state, verification teams must first evaluate “broad characteristics” like the overall spacing and size, or whether it’s cursive or print. Next they look at “local characteristics,” such as “internal spacing,” “curves, loops and cross-points” and the “presence or absence of pen lifts.”

The team then must “decide whether to accept the signature as genuine, reject it or conduct additional research. Only a combination of characteristic differences between signatures should trigger a rejection or additional research because no one signs his or her name the same way twice,” according to the guide.

Less than 1% of ballots are typically rejected — the rate was 0.52% in 2018, according to the Colorado secretary of state’s office.

No matter how many resources counties have at their disposal to actually verify signatures, they’ll need the time to implement it, too.

Colorado, for one, is a strong example of a state that underwent the process successfully with years of preparation, Christmas said.

“If we’re going to make more changes to PA election law, we have to understand it will take time for county officials and voters to acclimate to them,” Christmas said.

Shaniece Holmes-Brown, a 2021 graduate of Lincoln University, was a Pennsylvania Legislative Correspondents Association summer intern. She began working for the Albany (N.Y.) Times-Union this month as a Hearst Journalism Fellow. This story originally appeared in The Caucus, a investigative publication of LNP Media Group that reports on Pennsylvania state government.

An annotated guide to the distortions, half-truths and outright lies about the 2020 election in Pennsylvania

As the first panel of witnesses at the Nov. 25 Senate Majority Policy Committee hearing in G…

Wolf had said changes to the state’s voter ID rules were a nonstarter. But he shifted that position this week after vetoing the Republican-passed bill.