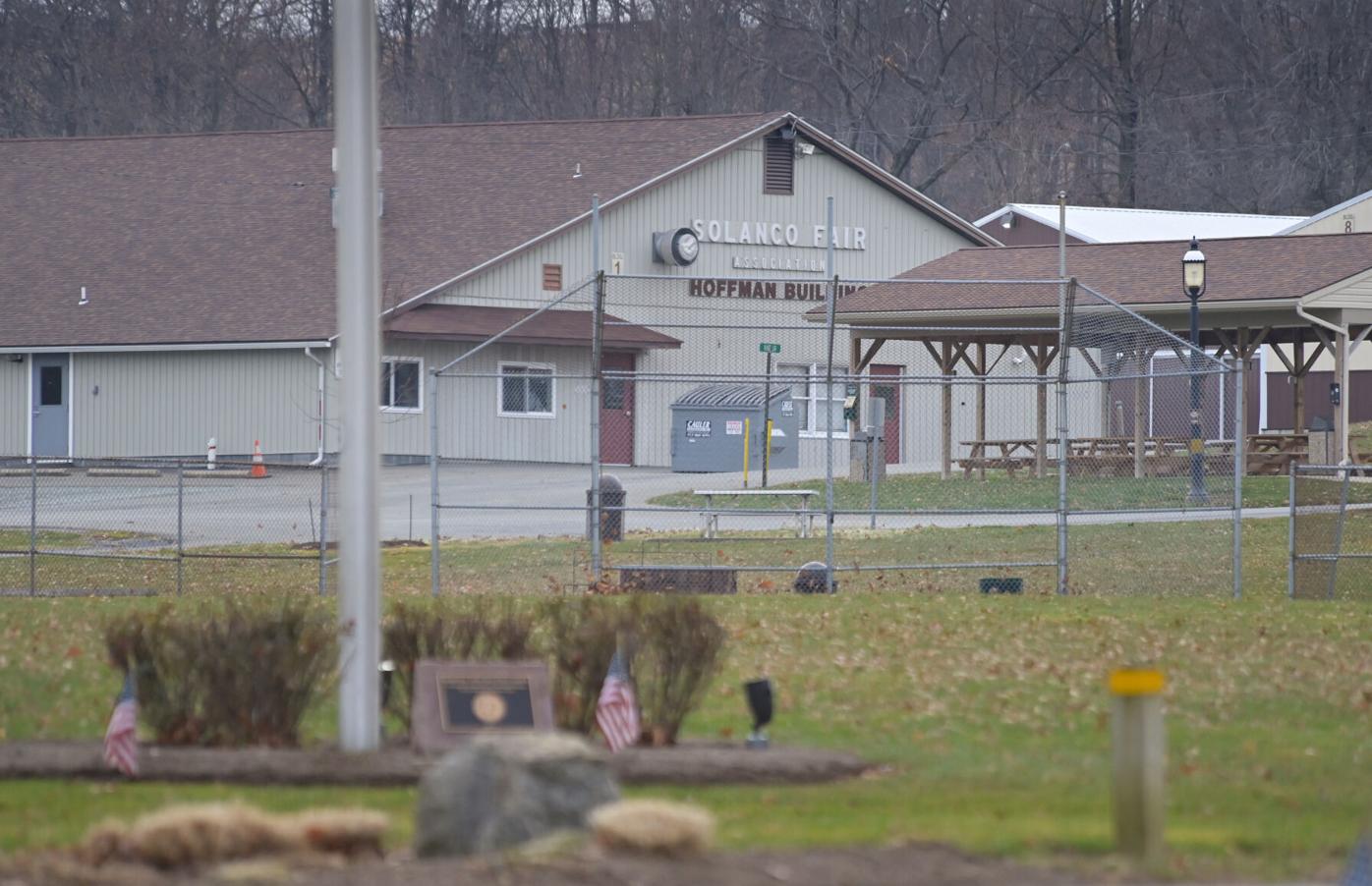 On a cold January day last year, more than two dozen people gathered inside a meeting hall at the Solanco Fairgrounds in Quarryville, a wide-open room that typically hosts the local fire company’s Christmas bazaar and the annual fall fair’s baked goods contest.

On this particular Sunday afternoon – Jan. 3, 2021 – the topic was darker and much more urgent.

Members of so-called “patriot” and militia groups from across Pennsylvania and New Jersey strategized about how they would communicate with each other in the event of a major catastrophe. The failure of the electrical grid. An epic natural disaster. An armed clash with their own government.

Many in the room believed the collapse of American society was "inevitable," that the American political process was broken.

The meeting, described in detail for the first time by two participants, plays a central role in the federal government’s prosecution of a New Jersey man, James Breheny, who attended that meeting and was caught on video storming the U.S. Capitol three days later, during the armed insurrection of Jan. 6, 2021.

The new details, obtained through months of reporting, provide the clearest picture to date of the mysterious Jan. 3 gathering in southern Lancaster County, which has been the subject of intense speculation since it was first disclosed in a federal criminal complaint related to the insurrection.

While the participants who spoke to LNP | LancasterOnline said the Quarryville meeting’s objectives were broad and focused on communication tactics – the group talked about the best handheld satellite radios and amateur radio bands to use in any emergency – they also acknowledged that some, including Breheny, spoke of traveling to the nation’s capital to attend then-president Donald Trump’s planned “Stop the Steal” rally.

“I know I heard one or two people were interested in (coordinating Jan. 6 communications),” said one of the participants. He said Breheny and others asked questions about specific communications plans for Jan. 6 after a slideshow presentation on communications techniques.

“That whole meeting had nothing to do with Jan. 6. It could have fed into it, but that wasn’t the purpose,” the participant said.

He confirmed the time, location and other details of the Quarryville meeting on the condition he not be identified because he did not want to be targeted by others in attendance that day. LNP | LancasterOnline granted him anonymity because the details he provided could not otherwise be obtained.

A reporter independently corroborated many of the details with Solanco Fairgrounds staff and a second participant.

In addition, a top state Oath Keepers official told LNP | LancasterOnline that he has evidence participants in the Quarryville meeting were sharing a list that day of supplies to carry to Washington, D.C., on Jan. 6. The list included cargo vans, survival kits and medical supplies, he said.

LNP | LancasterOnline was not able to determine whether others who attended the Quarryville meeting joined Breheny in traveling to Washington, D.C., three days later. The participants who spoke about the Jan. 3 meeting said they did not go to the nation’s capital on Jan. 6.

Regardless of the Quarryville meeting’s stated objective, it is clear that at least some of the participants inside the Solanco Fairgrounds’ Hoffman Building were preparing for events similar to those that would take place three days later.

A slideshow presentation, obtained by LNP | LancasterOnline in recent weeks, instructed the group on the tactics of “4th & 5th Generation Warfare.” It stated, in part: “A resistance force to a larger, well equipped military force needs to be light and agile. We are likely not going to be able to compete with money, technology, numbers of troops.

The slideshow did not refer to plans for Jan. 6. But federal law enforcement officials allege Breheny, an Oath Keeper, described the Quarryville gathering as a crucial planning session for Trump’s rally in Washington, D.C.

Editor's Note: The PowerPoint was provided to LNP|LancasterOnline on the condition that certain information in it not be released. Between slides 17 and 18, six slides that contained personally identifiable information were removed. They explained Winlink messaging, the Automatic Packet Reporting System, JS8Call and WebSDR. One slide between slides 19 and 20 — which showed the Garmin InReach web app — was also removed because of personally identifiable information. Three slides at the end of the presentation — which were a recommendation for what licensed/unlicensed tools were best as well as a "Comms Schedule" which showed specific frequencies — were also removed.

“This will be the day we get our comms on point with multiple other patriot groups, share rally points etc. This one is important and I believe this is our last chance to organize before the show,” Breheny wrote to Oath Keeper leader Stewart Rhodes, according to federal charging documents. “This meeting will be for leaders only.”

Rhodes did not attend the Quarryville meeting.

Les Mahan, a Chester County resident who rented the Solanco Fairgrounds building for the meeting, said most attendees were interested in “prepping” for natural disaster or societal collapse, and that radio communications is a vital component of those plans.

He said that after a slideshow presentation as people prepared to leave, one attendee stood up and asked that anyone planning to go to Washington, D.C., on Jan. 6 share their phone numbers. Mahan said about half a dozen people did so.

Mahan, who lives about 19 miles southeast of Quarryville in Oxford, Chester County, described himself as a “prepper” but said he is not a member of a militia. He said planning for the Quarryville meeting began in mid-December, prior to when he said he saw a Jan. 1 tweet by Trump inviting supporters to the capital.

“There was a lot of info out there in 2020 about election fraud and martial law, and of course it was nonsense, but there were a lot of guys who were talking about getting food” to prepare for such a breakdown, he said. “That was a lot of the conversation (at that meeting) ... being worried about martial law.”

He added that similar meetings — where communications and disaster preparations — are held frequently, including recently in Oxford, and that they are open to anyone who wants to come.

Breheny’s attorney, Harley Breite of Paterson, New Jersey, similarly denied the objective of the Quarryville meeting was to plan for an assault on the U.S. Capitol.

“The meeting had nothing to do with January 6,” Breite said. “My client is an expert in communications – HAM radio, that type of thing – and what my client was trying to do was to help secure communications lines in case of some natural emergency or some power failure.”

Breite said his client asked other attendees of the Quarryville meeting if they were going to Washington, D.C., three days later, but said his client did not discuss how different groups would communicate that day.

Breheny was indicted in May by the FBI on a charge of illegally entering the U.S. Capitol and impeding an official proceeding. The mob that stormed the U.S. Capitol tried to stop the routine, ceremonial certification of election results that showed Democrat Joe Biden won the 2020 presidential election.

Clark Bearinger, Quarryville’s police chief at the time, said one of his officers noticed a large group meeting in the Hoffman Building that day. He added that it’s not unusual for fairgrounds buildings to be used by outside groups.

Bearinger, who is now a magisterial district judge, said the FBI called him in the spring to ask about the meeting. He said he referred the FBI to borough manager Scott Peiffer, who also serves as the general manager of the fair association.

Peiffer and Bearinger both said they were not aware of the exact nature of the meeting.

“We don’t typically ask what groups rent the building; we just get a calendar,” Peiffer said.

A leader in Pennsylvania’s Oath Keepers organization, who said he did not attend the Quarryville meeting, told LNP|LancasterOnline that he saw evidence that participants did, in fact, talk about how to prepare for potential violence in Washington, D.C., three days later.

Hons Garrison, who was serving as the Pennsylvania Oath Keepers’ state membership director at the time and, until December, was the group’s president, said he was shown a photograph of meeting notes listing bulleted items needed for Jan. 6, including two cargo vans, walking sticks, survival kits vehicles and “e packs,” or medical emergency kits. Garrison would not provide the photo to LNP | LancasterOnline.

LNP | LancasterOnline could not independently verify his account; the two attendees who spoke with the newspaper said Jan. 6 was only mentioned in passing.

Garrison said his members were not in attendance, and court records show no one publicly associated with the Pennsylvania Oath Keepers has been arrested in connection to the Jan. 6 riots.

The House Select Committee to Investigate the January 6th Attack recently subpoenaed leaders of the national Oath Keepers organization, seeking documents and testimony concerning their role in the riots. A spokesperson for the committee did not respond to a request for comment on whether the Quarryville meeting is part of the panel’s investigation.

The committee is planning to begin holding more public hearings this year, with the hopes of producing a report by the summer.

This reporter’s work is funded by the Lancaster County Local Journalism Fund. For more information, or to make a contribution, please visit lanc.news/supportlocaljournalism.

Who are the Oath Keepers?

The Oath Keepers are a right-wing group founded in 2009 by Stewart Rhodes, a U.S. Army veter…

James Breheny: A New Jersey member of the Oath Keepers who was arrested for entering the U.S. Capitol on Jan. 6. The charging documents filed by federal prosecutors include an FBI affidavit that describes messages Breheny sent to another individual in Dec. 2020 promoting the Jan. 3 meeting of militia groups in Quarryville as a chance to coordinate and plan for how to disrupt Congress’ certification of Joe Biden’s victory.

LNP Source: This individual spoke with the newspaper on condition that his identity not be revealed. He attended the Quarryville meeting and described it as a session on how different patriot and militia groups could use radio technology to stay in touch in the event of a major disaster or armed conflict with the government. He said he did not travel to Washington, D.C., on Jan 6.

Les Mahan: A Chester County resident who rented a building at the Solanco Fairgrounds in Quarryville for the Jan. 3 meeting. Like the other source, he said the meeting was not held to plan the Jan. 6 attack on the U.S. Capitol. He also said he did not travel to the nation’s capital on Jan. 6.

Hons Garrison: Until December, he was president of the Pennsylvania Oath Keepers, which split from the national group in 2015. Garrison said he heard about the Quarryville meeting after the fact and was told attendees talked about Jan. 6 plans. He said no one from his group attended the Quarryville gathering.

When: Solanco school board meeting, Jan. 3.

Oath Keepers founder Stewart Rhodes, who was arrested Thursday in Texas on sedition charges tied to the Jan. 6, 2021, U.S. Capitol attack, had…