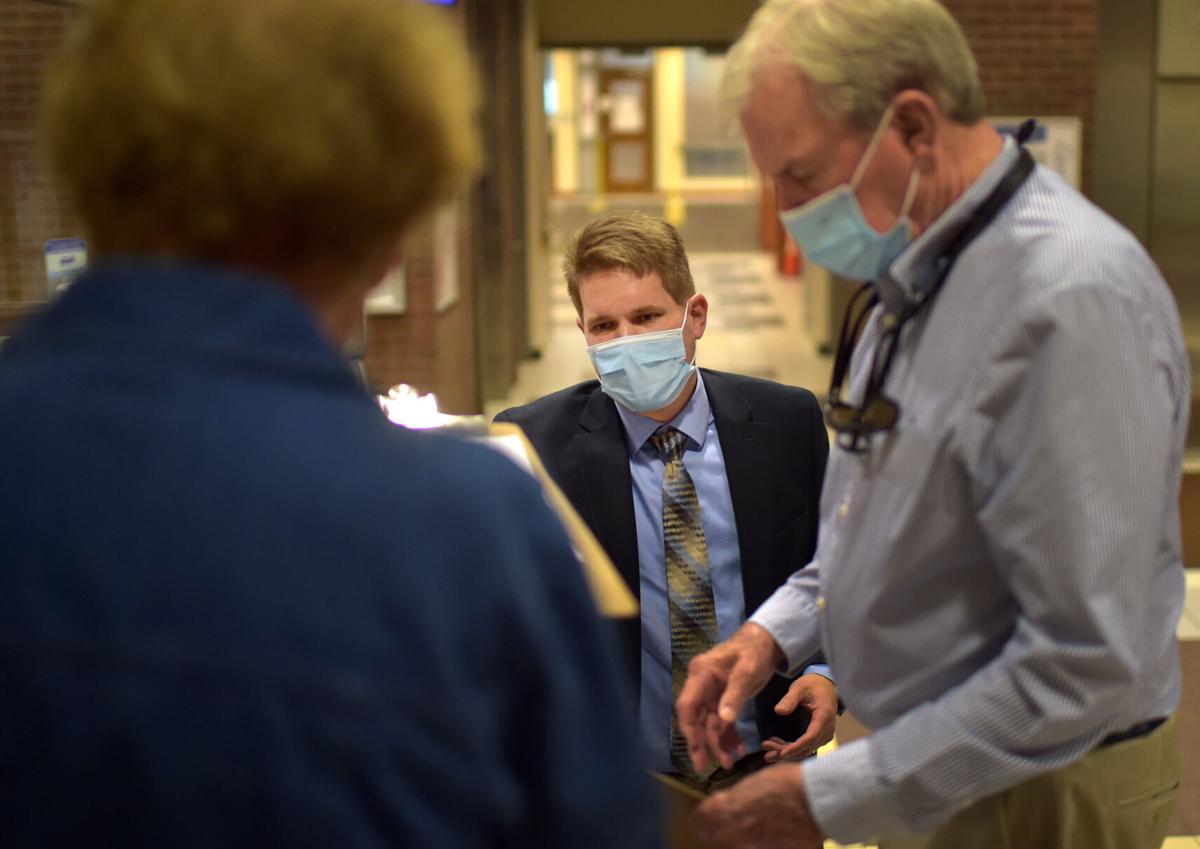 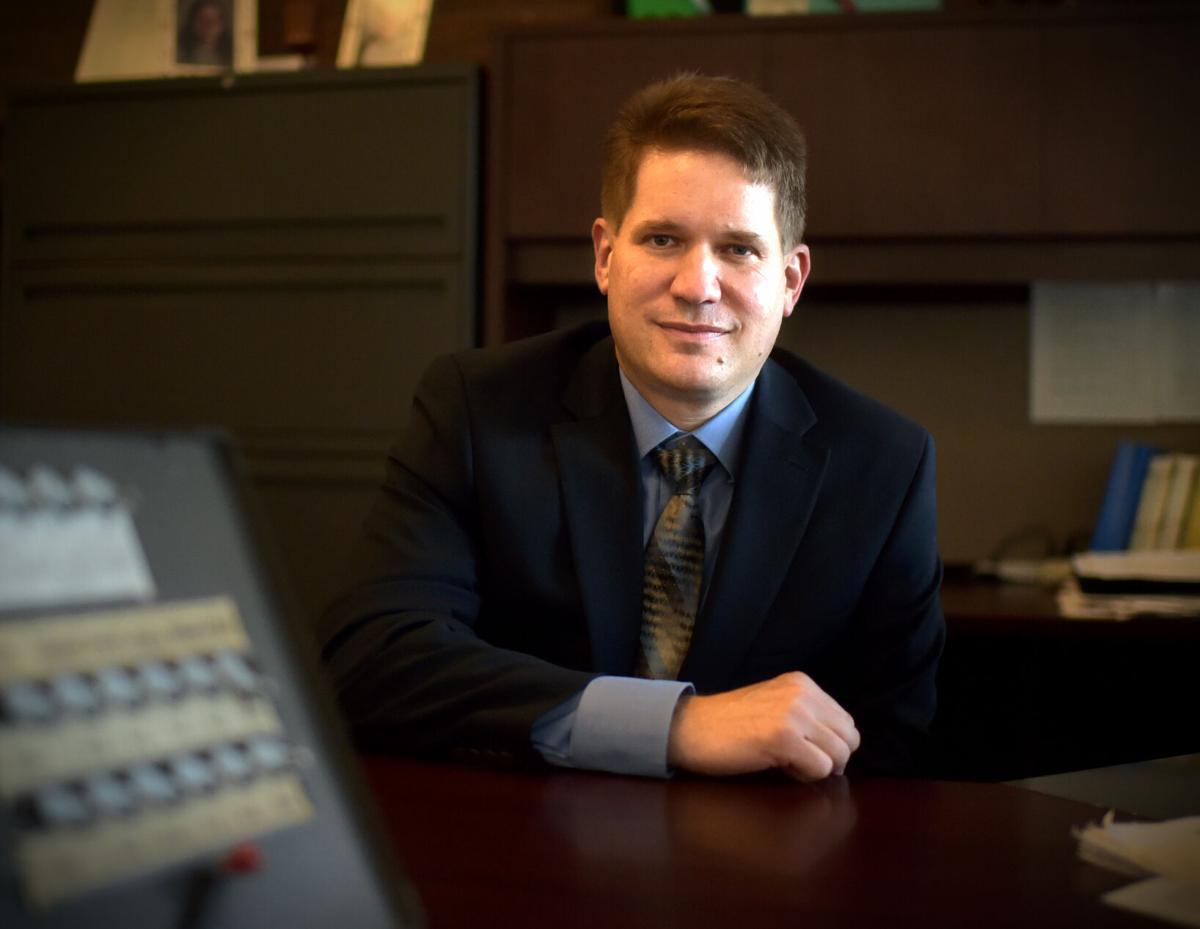 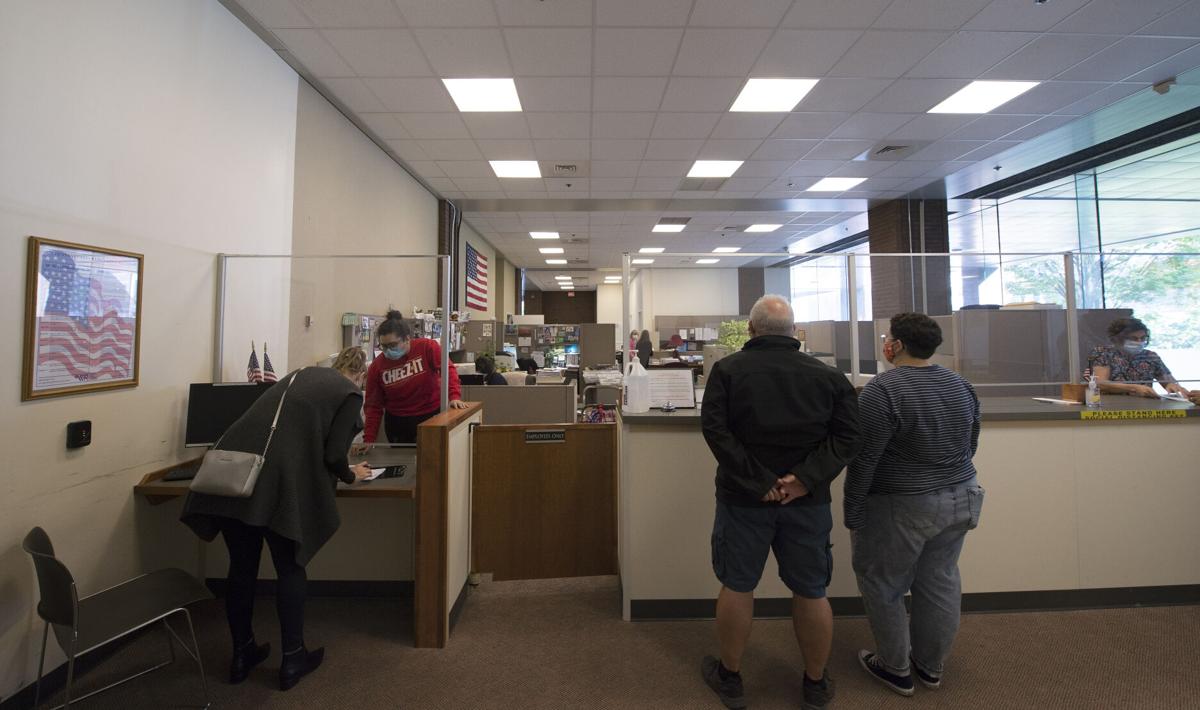 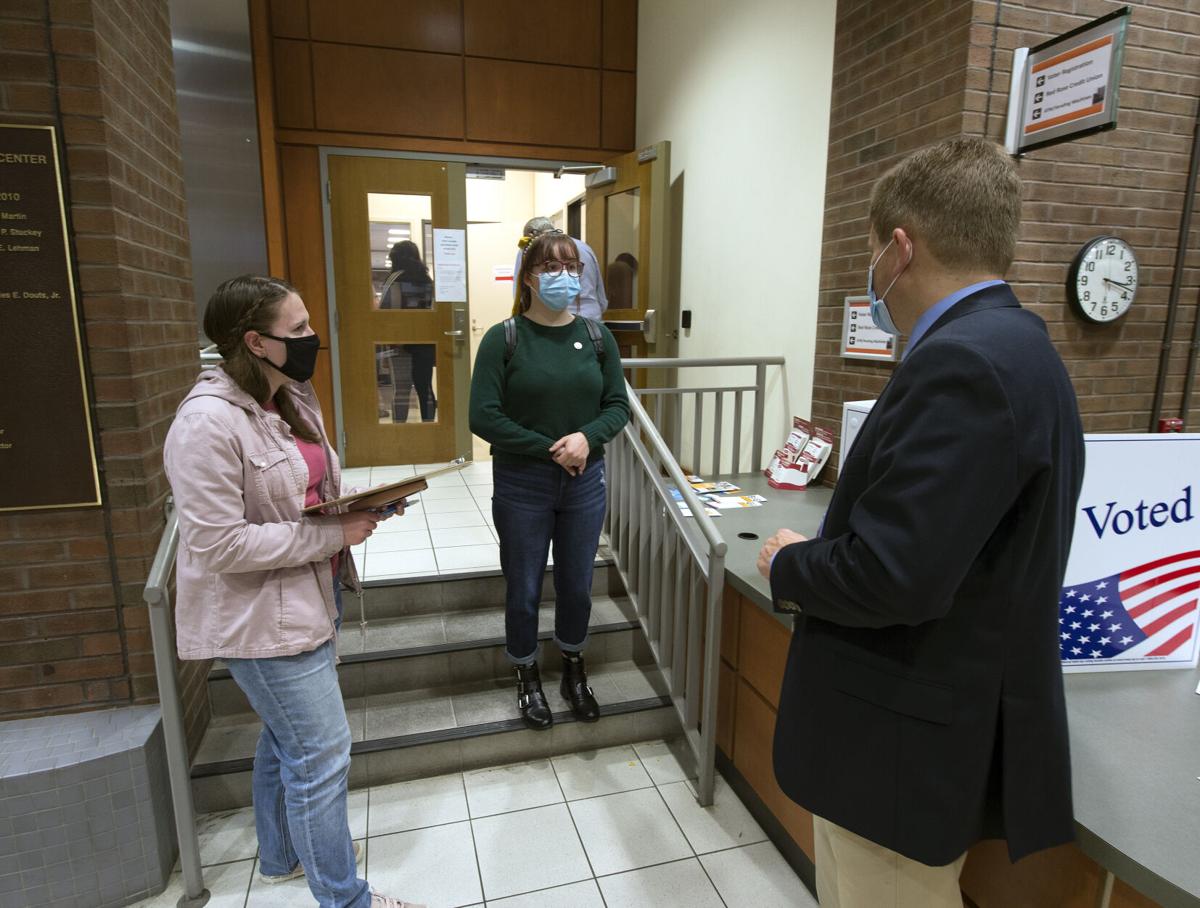 Randall Wenger, right, Chief Clerk Lancaster County Board of Elections, gives intructions on applying for a mail in ballot to Alyssa Frey, left, and Sarah Leary, both from Lancaster, at the Lancaster County Government Offices Thursday Oct. 22, 2020.

He understands why. First, there's the massive expansion of mail-in voting during a pandemic that's upended nearly every aspect of daily life. Then there's the more sinister but still unknown -- the claims that the whole election is rigged, that votes are being suppressed, that foreign governments are trying to sabotage the most important aspect of the American democracy.

Eight years ago, newly on the job as chief clerk of the Lancaster County Board of Elections, Wenger was confronted with election changes that, at the time, seemed complicated and confusing. Pennsylvania was one of several states implementing voter ID laws during the 2012 presidential elections. Many voting rights advocates said the law had the potential to disenfranchise voters who lacked the proper ID or were new to voting altogether.

“I personally don't think it's ever a good idea for our leaders to make changes to the process in a presidential election year, because it creates undue, unnecessary voter confusion and makes implementation much more difficult for counties because of the volume of voters,” Wenger said. “I think [2012 elections] went fine. It was a matter of managing changes, trying to communicate with what the reality was, as opposed to what the rumors were.”

The voter ID law was eventually struck down in court, but confusion around whether people were eligible to vote lasted into November of that year.

Ever since, Lancaster County elections have passed without major problems. Even the rollout of new voting technology last year didn’t result in big disruptions or contested results.

So Wenger's message to voters this year is simple: We've got this.

“We have a process that does work,” Wenger said. “While there are aspects that could be improved and refined by legislation, the process will work. The process will produce an accurate result.”

The word used most frequently to describe the county Board of Elections office is “efficient.”

Its operations are shaped by Wenger’s detail-oriented personality and dedication to helping organizations “reach their full potential” -- an approach developed early in his life: At age 17, Wenger was running a kitchen at a now-closed restaurant in Clay Township every day after school.

“The concept of efficiency, even back when I was a teenager working as a restaurant manager -- both for operations and cost -- is something I’ve been doing since then,” Wenger said.

WHO IS IN CHARGE OF LANCASTER COUNTY’S ELECTION?

As the county prothonotary for eight years prior to becoming chief clerk, Wenger said his embrace of online technologies helped make the office more efficient and, more importantly, increased the public’s access to its services.

“Randall is a taskmaster,” Shaffer said. “Every single thing has to be accounted for and taken care of.”

Wenger has some trademark phrases. When he answers the phone and is asked how he’s doing, he’ll respond, “Better than I deserve.” He emphasizes the operation wouldn't work without the work of his staff.

He’s willing to do every job himself. When a line develops at the office’s front desk, Wenger will often help. “What can I help you with?” Wenger asks each person with enthusiasm.

On a recent afternoon, Wenger greeted a young man who was holding a ballot and empty envelopes closely to his chest. “I just want to make sure I’m doing this right,” the young man said.

Then it was onto the next customer. After everyone in line was taken care of, Wenger headed back to his office to tackle other items on his to-do list. He receives close to 200 emails per day from voters, many of whom ask the same questions over and over. He makes a point of responding to them all with as little delay as possible.

He spent his day off on Columbus Day filming instructional videos for poll workers who were unable to attend in-person training sessions. In another room of the county government building his daughter Kirsten prepared personal protective equipment for voting precincts.

With a third or more of Lancaster County voters expected to cast mail-in ballots this election,  Wenger dismisses worries about whether the U.S. Postal Service is up to the task.

He noted that he uses the mail for plenty of important things, like sending his mortgage payments. And like so many of his fellow voters, Wenger mailed his ballot recently. His wife plans to do the same, though he joked that she still has to move it from the refrigerator to a mailbox.

But for her first ever vote, Wenger said his 18-year-old daughter will vote in person. “But she knows how to get a mail ballot if she wants one,” Wenger added.

On Election Day, Wenger won’t even be at his office in the county building. He’ll be down the street at the Lancaster Convention Center, working in a large ballroom alongside staffers like Shaffer and 150 volunteers. Their job is to process and scan the 100,000-plus mail-in ballots the county is expecting. Pennsylvania law forbids counties from beginning that process until polls open at 7 a.m.

While that task is underway, in-person voting will be up and running at the county’s 243 voting precincts. Unlike many other counties in Pennsylvania, Wenger said Lancaster has fully staffed its polling places and boasts more volunteers than volunteer positions.

“These are people who truly believe in this,” Wenger said.

To process all the mail-in ballots, volunteers will use the county’s new letter opener, which can open 40,000 envelopes per hour. Each of the county’s three scanners can scan 18,000 ballots per hour.

If the scanner finds an error, a staff member will carry the ballots to the counting scale. This scale will tell the staff member exactly which ballot in the pile has the error, so it can be further examined.

Pat Noel will be one of the 150 volunteers in the Marriott on Election Day. She started volunteering in the elections office approximately five weeks ago, and previously worked as a poll worker in York County prior to moving to Lancaster in 2018.

She and her husband volunteer every Friday morning, and Noel will pick up additional times to come and help approximately three times a week when she isn’t running her talent development consulting business. Right now, she’s helping alphabetize and file mail-in ballot applications.

“I knew there would be a tremendous amount of work that needed to be done [this year] and my husband did too,” Noel said. “We should appreciate that we live in a democracy and help in whatever ways we can do that.”

Noel previously ran call centers and bank departments, and said she sees the elections staff has “an unbelievable attention to detail.”

“They don’t just assume it’s OK and let it go by,” Noel said. “They really go above and beyond to solve somebody’s problem. I’ve seen staff run upstairs looking for answers. It’s important for people to know that there are people who really care about having this be an efficient and fair election.”

When people question whether there’s election fraud, Shaffer and her coworkers take it personally, she said.

“We don’t throw ballots out. We are just as concerned as you are that you get your ballot and it’s counted,” Shaffer added.

But it shouldn’t be a surprise to Wenger that voters might question whether his office is, at least, unconsciously biased. After all, he served as the executive director of the Republican Committee of Lancaster County 2002 to 2004. Wouldn’t it be natural for him to favor the GOP?

Just the opposite, he says. Every staff person at the elections office has a political affiliation of some type, Wenger said. But he and his team know their jobs have a much deeper meaning: “It’s the foundation of our system of government,” he said. “Our voters need the confidence that our election will be run safely and securely. And that has absolutely been our practice.”

“People can believe whatever they want to believe in their spare time,” Wenger said, dismissing worries that his personal background in politics would affect how elections are conducted here. “When it comes to administering a free and fair election, that’s something we all have in common.”

HOW LANCASTER COUNTY HAS PREPARED FOR THE 2020 ELECTION?

Wenger’s commitment to fairness was on display last week when LNP | LancasterOnline asked him about mail intended for the elections office being delivered to a wrong address nearby.  Hearing the question, he didn’t hesitate to walk down the street to pick up the mail himself and exchange contact information with the person who received the misdirected mail.

Arriving back at his office, Wenger stopped at security just inside the county building’s Chestnut St. entrance. There sat the county’s lone ballot drop box next to the metal detectors, in easy view of county sheriff’s deputies charged with ensuring no one tampers with it.

Many other counties decorate their drop boxes with patriotic colors and messages about the importance of voting. But Lancaster’s is just a large black box. The county doesn’t even hand out “I Voted” stickers.

“Would you expect anything different?” Wenger asked rhetorically with a smile.

Randall Wenger, who has managed Lancaster County elections for the past eight years, is leaving his job at the end of the month to become mana…