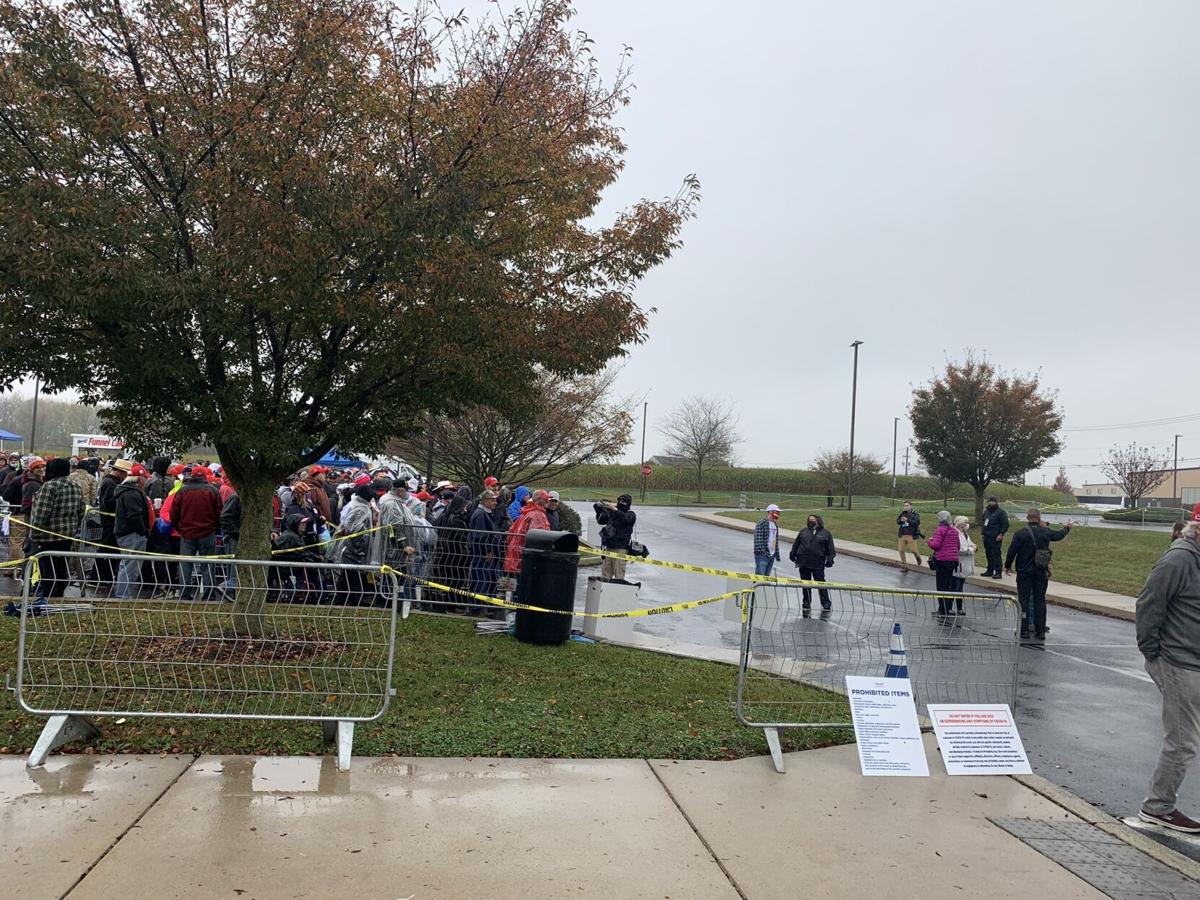 With more Make America Great Again hats than masks, thousands of Pennsylvanians gathered at the Lancaster Airport to see President Donald Trump nearly a week out from the Nov. 3 election.

Trump hosted one of his signature campaign rallies outside an airport hangar at the Lancaster Airport in Lititz. It was the second of three stops – others to Allentown and Johnstown -- that he’s making in the must-win state of Pennsylvania on Monday.

During his speech at Lancaster Airport, Trump thanked the "Pennsylvania Dutch" for their hard work.

Trump left the stage at around 3:20 p.m. after speaking for about 90 minutes.

You can watch a livestream of Trump’s speech here.

Some of the attendees, like Manheim Central Middle School eighth graders Hailey Peterson and Lily Temple, won’t be able to vote in this election – or even the next presidential election. But they still came to see Trump at their first-ever rally, decked in face paint, head-to-toe Trump merchandise and flags wrapped around them. They’ve supported him in local parades, and have long been politically engaged in Republican politics following in their parents’ footsteps, they said.

“He’s just been bringing it up a step further than obviously our last president,” Temple said. “I just feel he’s doing a better job than other people with the [handling of] coronavirus.”

Ethan Reynolds, 18, skipped a day of school at Conestoga Valley High School to see Trump, getting up at 3:30 to get in line by 4 a.m. He’ll cast his first-ever vote for Trump in person on Nov. 3.

Many grocery store employees had their hourly pay temporarily raised during the pandemic, as demand increased for eligible employees in one of the industries deemed “essential” by Gov. Tom Wolf.

Trump’s actions to address the coronavirus resulted in Lancaster’s 8% unemployment rate and recent high numbers of coronavirus cases in Pennsylvania, Biden said in a statement prior to Trump’s visit to the state.

“As I told union members and families in Pennsylvania this weekend, as president, I’m going to shut down the virus and safely open up the economy,” Biden added. “Then I’ll stand alongside working communities in Pennsylvania as we build back better by creating millions of good-paying jobs.”

John and Linda Miller, of Lititz, said Trump is the president who will protect their First and Second Amendment rights. Religious freedom is one they value most, they added.

As someone who is pro-life, John Miller said he couldn’t support Biden.

We livestreamed as Air Force One made its way to the Lancaster Airport. Watch the stream below.

About a month ago, Vice President Mike Pence and Karen Pence visited Lititz for a watch party for the first Trump-Biden debate.

President Trump's campaign has ramped up its efforts in Pennsylvania, as it's on of the key battleground states that could determine the outcome of the election.

LNP | LancasterOnline is on the scene. Reporters are tweeting their observations, but tweets may become sporadic due to connection issues. Follow up with live updates below.

Throughout the next week, LNP | LancasterOnline will be posting information voters need to know. Keep up to date with this ongoing list below.

More than 80,000 Lancaster County voters will receive their 2020 general election mail-in ballots in the coming days, the biggest vote-by-mail…

Candidate responses in the 129th House District: Here's what they had to say, in their own words

The District: The 129th lies mostly in Berks County, but the slice covering part of Lancaster County includes approximately 8,000 voters. The …

Candidate responses in the 98th House District: Here's what they had to say, in their own words

The District: The 98th encompasses a wide mix of rural and suburban areas in the western part of the county. Although it includes some small g…

The District: The 41st is mostly made up of suburban voters and is part of the county that has continued to diversify in recent years. This ra…

The District: This district is made up mostly of rural parts of Chester County, with fewer than 2,000 voters living in Lancaster County. Repub…

The District: The 99th is one of the most conservative districts in all of Lancaster County, comprising mostly rural parts of the county’s nor…

A total of 107,051 Lancaster County registered voters applied for and were approved to cast a mail-in ballot for this year’s general election,…

More in Complete coverage of President Donald Trump's visit to Manheim Township, from crowds to speech (3 of 5)

UPDATE: You can read about Melania Trump's visit, which included a visit to the Lancaster County GOP headquarters, here.

President Donald Trump will visit Lancaster Airport in support of his reelection campaign, just over one week before Election Day. Here's what…