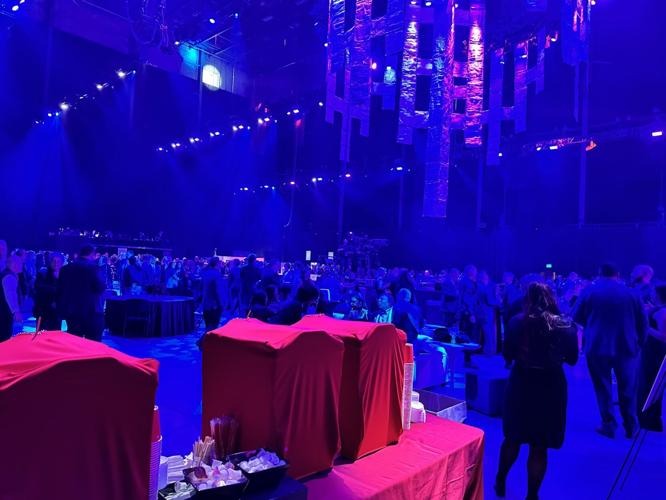 This was the scene at the start of the inauguration gala for Governor Josh Shapiro at Rock Lititz Tuesday.

Josh Shapiro is sworn in as Pennsylvania's 48th governor on Tuesday, Jan. 17, 2023, at the state Capitol in Harrisburg, Pa.

This was the scene at the start of the inauguration gala for Governor Josh Shapiro at Rock Lititz Tuesday.

Josh Shapiro is sworn in as Pennsylvania's 48th governor on Tuesday, Jan. 17, 2023, at the state Capitol in Harrisburg, Pa.

Pennsylvania officially has a new governor as of today.

Shapiro and Davis are scheduled to celebrate their inauguration with a gala at Rock Lititz in Lancaster County this evening, with doors opening at 5 p.m. and festivities set to begin at 7 p.m.

You can check out live Twitter coverage of the gala below from LNP, Spotlight PA, The Caucus and other local news outlets. Millersville senior and Hempfield alum Ruby Mundok, who helped plan the inauguration, will also be taking over the LNP | LancasterOnline Instagram page with additional coverage; you can check that out here.

Democrat Josh Shapiro has become the 48th governor of Pennsylvania at the inaugural ceremony at the state Capitol. The 49-year-old Shapiro took office Tuesday with more experience in state government than any recent predecessors. Chief Justice Debra Todd administered his oath on a stage erected behind the state’s ornate Capitol in Harrisburg, with lawmakers, members of Congress and others looking on. Shapiro succeeds term-limited Democratic Gov. Tom Wolf, and is the first governor of Pennsylvania since 1966 to be elected to succeed a member of his own party. Meanwhile, Democrat Austin Davis was sworn in as Pennsylvania’s first Black lieutenant governor.

Wiz Khalifa, Smokey Robinson and Mt. Joy will perform at the inaugural celebration of Govern…

Local, Pa. fare to be served at Shapiro inauguration gala

Here's how you can request tickets to Gov.-elect Josh Shapiro's inauguration; tickets on sale for Rock Lititz event too

Secrecy has dominated Shapiro's transition; tight grip on information may be sign of things to come

HARRISBURG — For nearly two months, a team of advisers has been working to ensure Democratic…

A lively crowd dressed to the nines packed Studio 1 on the Rock Lititz campus Tuesday night to celebrate after Gov. Josh Shapiro and Lt. Gov. …