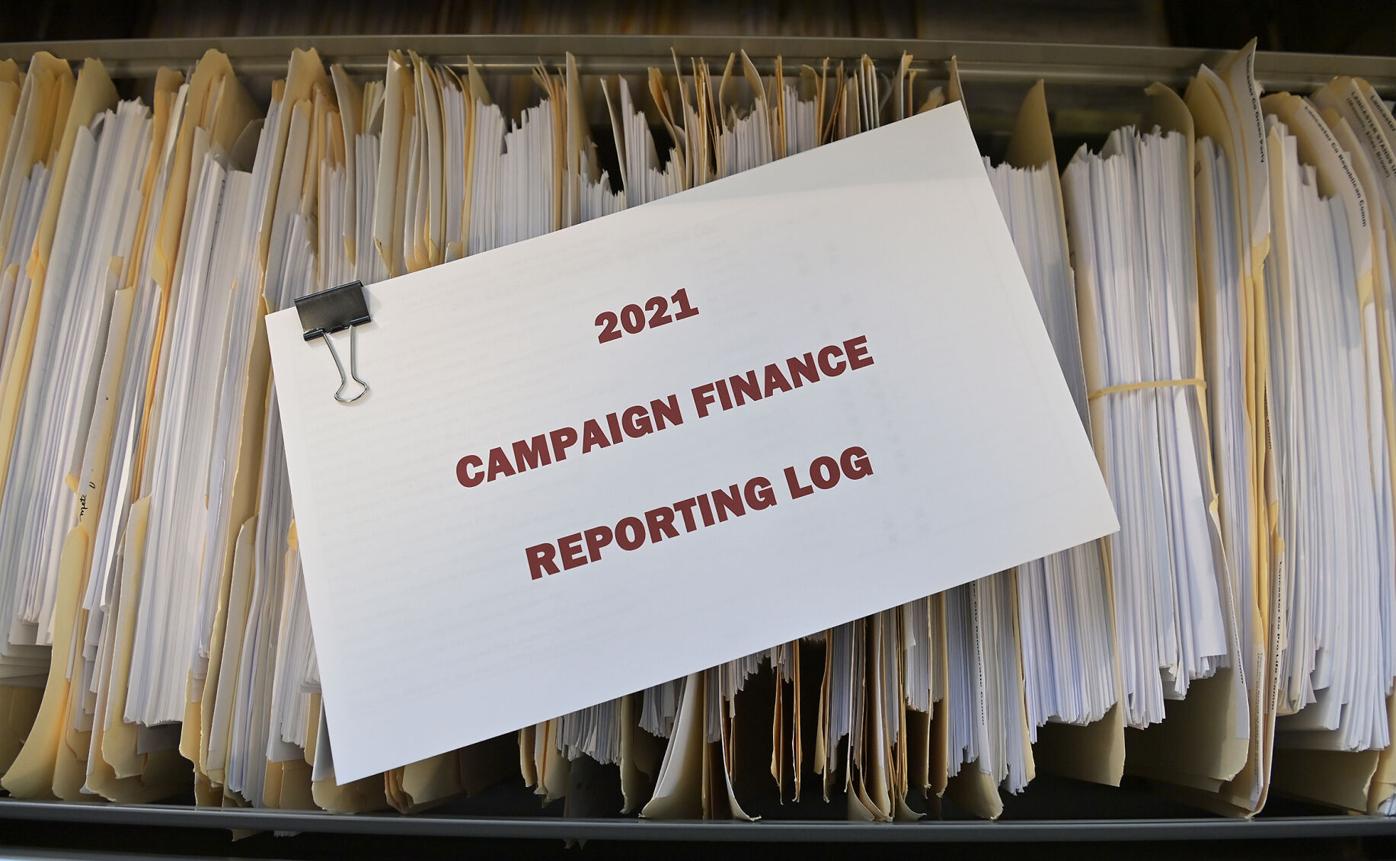 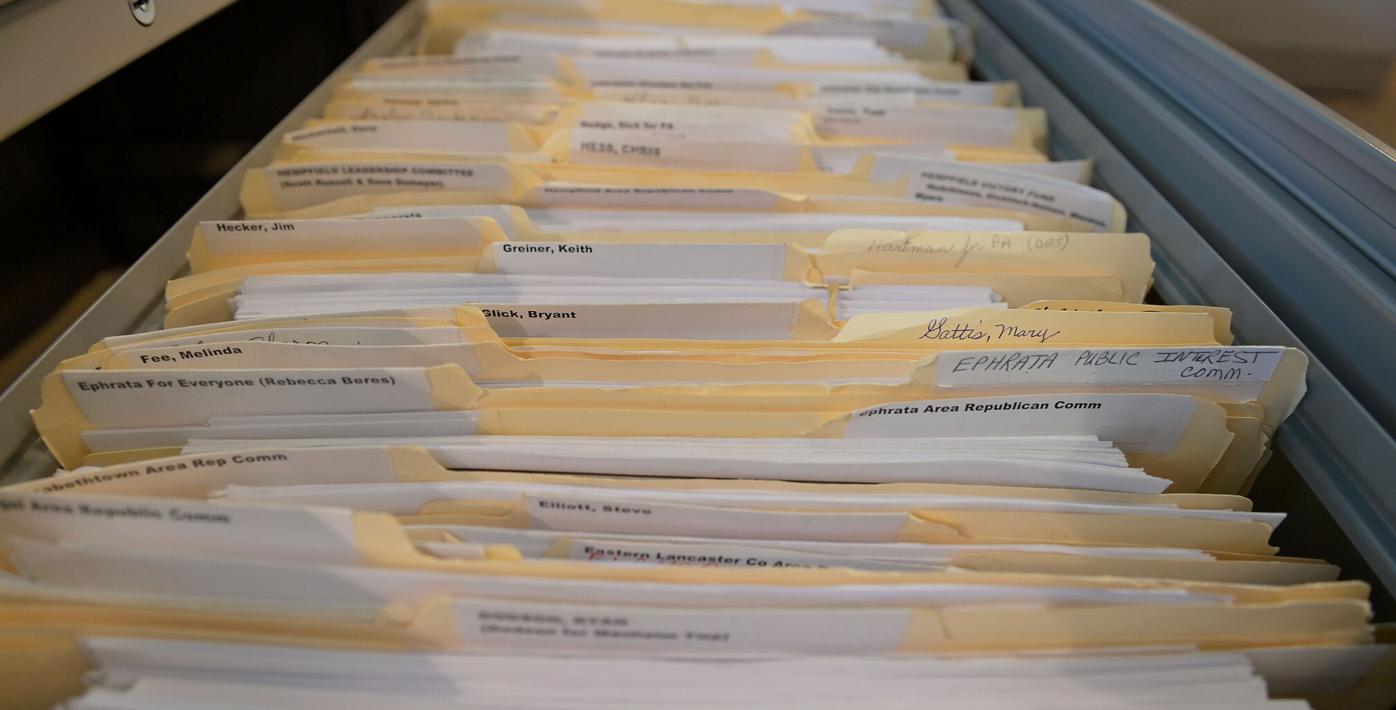 Behind the counter in the Lancaster County Board of Elections office, tucked away in two of dozens of identical filing cabinets, thousands of pages are stored showing who influences elections in Lancaster County.

You likely didn’t know that every dollar spent in local elections, including the financing of school board and local borough council races, is documented in these two inconspicuous drawers. And you might not know that any member of the public is allowed to review these documents.

But for the most part, this information about how local politicians spend their money -- and who they are getting their money from -- are examined by only a few: county officials tasked with archiving them, politicians and their campaign staffs, and reporters.

But Lancaster County has no plans to follow those counties’ lead. Members of the public must visit in person to look at the records, or rely on overworked newsrooms like LNP’s to do it for them. Many of these filings, by the way, are filled out by hand, posing a challenge to anyone trying to decipher the handwriting of campaign treasurers.

That’s just one of the obstacles to shining more light on how campaigns are funded here. Another is the deadlines governing when candidates must file their reports.

The last filing deadline for the municipal elections was June 17. The next one isn’t until Oct. 22 –  less than two weeks before Election Day and more than four months since the last reports were due. This means voters won’t have anywhere close to a full picture of how much money was spent to influence their local elections until nearly the last minute, when mail-in ballots are expected already to be in the hands of some voters.

So in campaigns as important -- and expensive -- as the four races for Manheim Township commissioner, voters currently only know how much Republicans spent through the primary: more than $50,000. The June 7 documents, moreover, show that the Democratic candidates, who did not have competitive primaries, spent only $615.

For state-level races, candidates must file campaign finance filings with the Department of State, which then posts the filings to its campaign finance database accessible to anyone with an internet connection.

The problem is that this campaign finance reporting structure was built before most people had access to the internet, said Pat Christmas, the policy director at good government advocacy group Committee of Seventy.

“This is a perfect example of where our law is just way too old, written for a time where there was no internet, no computers -- at least not the sophisticated computers we have today,” he added.

There are two GOP-sponsored bills in the General Assembly that would require all state-level  candidates and political action committees to file their campaign finance documents online through the Department of State, which is currently not required (though there is an online database where voters can view PDFs of each filing).

One of these bills in the House, introduced by Perry County Republican Rep. Perry Stambaugh, passed unanimously out of committee and he expects it to pass unanimously on the floor.

Many candidates and PACs already file online, one consequence of the COVID-19 pandemic. But it’s not required. Stambaugh’s predecessor, former Rep. Mark Keller, had a bill to require online filings, but it was later amended to only encourage PACs and candidates to file online, Stambaugh said.

“It will save everybody a lot of time,” Stambaugh said. “It increases transparency, it makes it a lot more open, and it should also eliminate some of the delays to put these reports online after they get filed if they’re filed electronically.”

Still, Stambaugh’s bill would not require local candidates to file online, meaning Lancaster County could continue to store its campaign finance filings in those two filing cabinets in the Board of Elections office.

Stambaugh said he would consider widening the legislation down the road to include local candidates, too.

“Anything that improves the ability for the public to look at expenditures that go to political candidates is definitely worth it,” he added. “At the end of the day, we shouldn’t have anything to hide.”

It takes a lot of time for county staff to scan and post campaign finance filings as they are currently received, said Wanda Murren, a spokesperson for the Department of State. And at each county, there is a “vast difference” of resources, which is apparent to anyone who visits the different county websites.

Christmas said he doesn’t blame counties for not going the extra mile to scan and upload documents, since they’re already stretched so thin administering elections. But he believes counties should do so if they have the means.

“Having hard-copy reports in a filing cabinet is not transparency,” Christmas said.

Christa Miller, the chief registrar of the county Board of Elections, said the current system – paper files in filing cabinets – is working for them. The elections office accepts filings by email, mail and in-person for each of the filing deadlines. At one time during former chief clerk Mary Stehman’s tenure from 2000 to 2011, officials discussed moving these filings online but it “didn’t seem feasible,” Miller added.

Requiring online reporting is “something we could consider for the future,” she said in an email.

The state shouldn’t wait for counties to make this move on their own, Christmas said. Lawmakers should move on these bills and require all PACs and candidates to file online, in the hopes of getting as close as possible to real-time filing updates, instead of the current month's-long filing gaps.

Philadelphia as a model

Philadelphia -- regularly vilified, fairly or not, as a home for rampant corruption -- is a model for campaign finance transparency.

In2015, Philadelphia’s Board of Commissioners began posting all the PDFs of the paper filings online. This replaced the former process where candidates filed paper copies with three different city offices. Commissioner Al Schmidt, the lone Republican on the board since 2012, said that was inefficient.

Now the Philadelphia elections board has created a searchable database so voters and good government groups can download campaign finance data and sort it to identify special interest groups that might be influencing the city’s campaigns.

When making this change to online filings, the Board of Commissioners, and its counterpart the Board of Ethics, installed computer terminals to help filers navigate the process. Bills in the Legislature to mandate online filing would require a similar training component.

Giving the public access to this information also helps with compliance, Schmidt said, making it easier for oversight employees to flag when the filings of PACs and candidates don’t match up.

LNP | LancasterOnline reporters spent months creating their own database of filings from top political players in the county, which the newspaper hopes to expand and eventually make public.

To build it, reporters spent hours each week manually copying the filings into a digital, searchable version. But even this hand-built database is unlikely to include all of the information available in the county’s filings, because there is not enough time in a week to copy down or scan all that information.

Miller agrees that the information in these filings is important, helping to “paint a fuller picture of a candidate’s platform” by showing where campaign money is coming from.

She admitted, though, that it’s likely most voters don’t know these files even exist in her office.

Until the Legislature mandates online filing at the local level, such a change is in the hands of the county’s three elected commissioners. If they order it done, Lancaster County would join Philadelphia and Allegheny counties in embracing fuller transparency for voters.

Commissioner Ray D’Agostino, who leads the county’s elections board, did not respond to multiple calls for comment.

Editor's Note: This column has been updated to clarify the reporter's argument that Philadelphia has a long-held reputation for corruption among politicians.

In the upcoming Manheim Twp. commissioners race, development is still the No. 1 issue

Elizabethtown school board, county row offices: Races you should watch in the 2021 municipal election

More than 130 candidates are running for offices across Lancaster County in the Nov. 2 munic…

While school board members and administrators have attempted to quell the anger associated with CRT by publicly asserting it is not part of their curriculum, that hasn’t stopped parents – fueled by conservative media, politicians and influential far-right groups with large social media presences – from accusing schools of adopting CRT.

Democratic candidates are contesting three open county row office positions on the ballot this year, the first time the party has competed for…