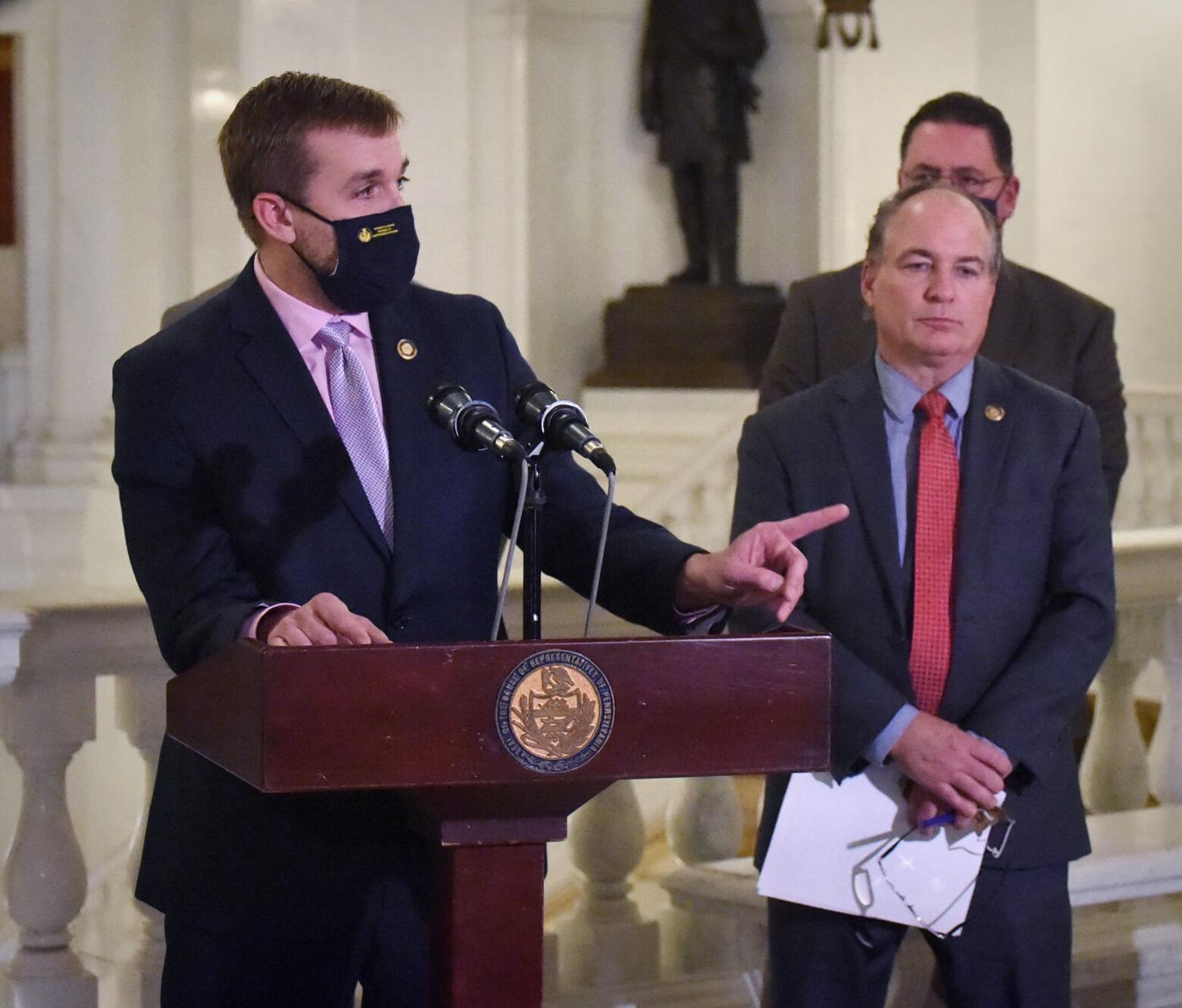 Speaker of the Pennsylvania House of Representatives Bryan Cutler replies to a question during a news Conference in the capitol Tuesday, Nov. 10, 2020. Standing to the right of Cutler is House Majority Leader Kerry Benninghoff. 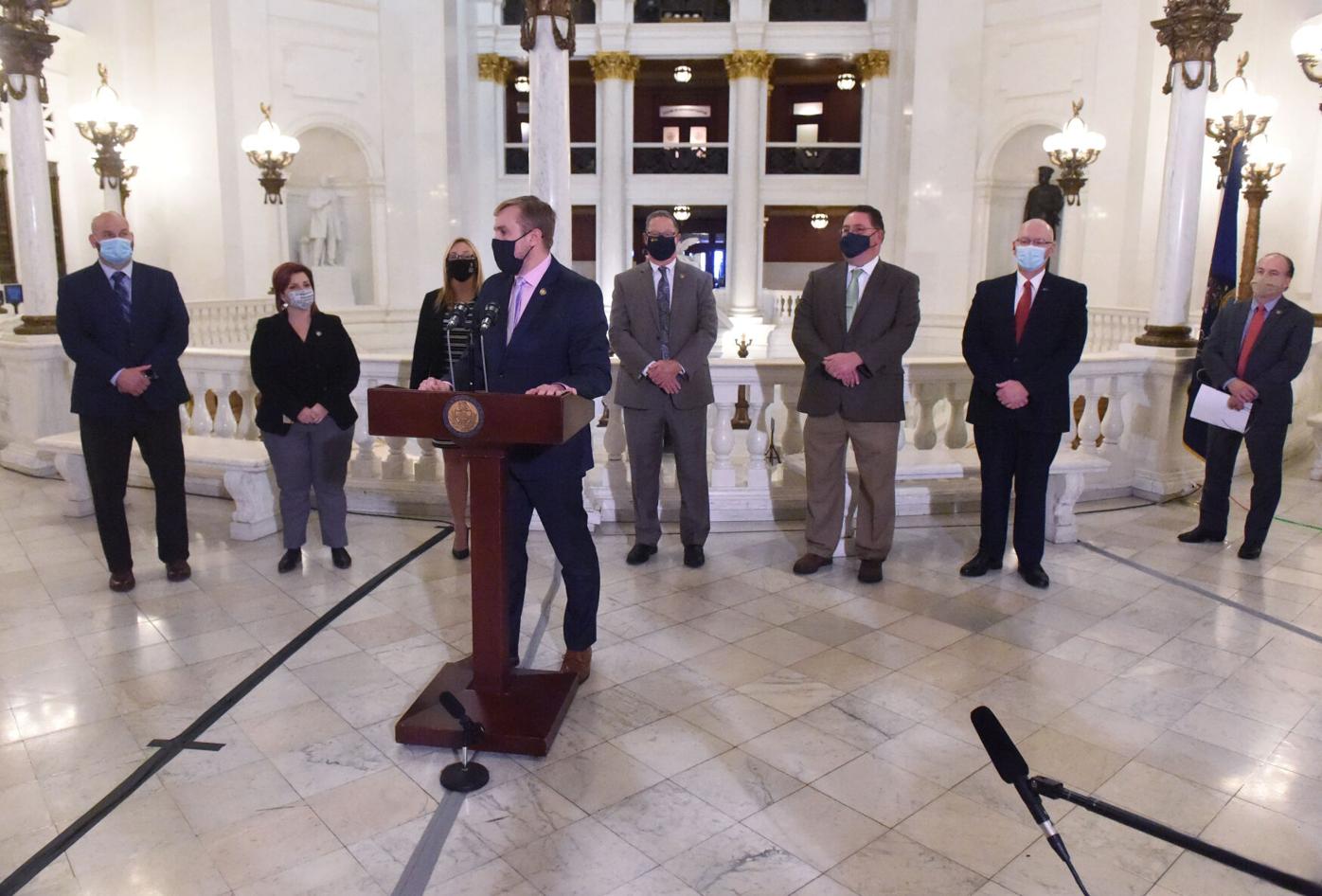 Speaker of the Pennsylvania House of Representatives Bryan Cutler speaks during a news Conference in the capitol Tuesday, Nov. 10, 2020. Cutler is joined at the news conference by the 2021-22 House Republican leadership team.

HARRISBURG — The top Republican in Pennsylvania’s House of Representatives on Tuesday said a key committee will audit last week’s election to ensure it was administered fairly, even as his party gained seats in the chamber and GOP candidates beat Democrats in two statewide races.

At a Tuesday press conference in the state capitol to introduce the party’s leadership team, House Speaker Bryan Cutler announced that the House State Government Committee, under interim chairman Seth Grove (R, York County), will review what Cutler called “conflicting guidance” issued to counties by the state on how to handle mail-in ballots.

Grove’s panel will also review the impact of two rulings by what Cutler called an “activist” state Supreme Court, specifically the court’s establishment of a three-day grace period for mail-in ballots to arrive at elections offices, and its determination that signatures on mail-in ballots don’t need to match what’s on file.

Is Joe Biden the president-elect? In Lancaster's most conservative areas, it depends on whom you ask.

These issues, Cutler said, placed a “cloud” over the legitimacy of Pennsylvania’s election.

The Peach Bottom Republican said the intention of this audit is to address issues for future elections, not to make any changes to this election’s results.

“The very fact that individuals can question the results is a result of [the Department of State and Supreme Court’s] actions,” Cutler said. “It’s very unfortunate, and we need to get to the bottom of it.”

Neither Cutler nor House Majority Leader Kerry Benninghoff (R., Mifflin) offered examples of fraud in last week’s election. So far, lawsuits filed by President Trump’s campaign and the state Republican Party have focused on applications of the state’s election law and not on specific allegations of outright fraud.

Cutler said Grove’s committee will be given access to several hundred election complaints made by legislators and voters, though he did not describe the substance of those complaints.

“I have every reason to believe if the law were properly followed, we can absolutely trust the outcome,” Cutler said.

Cutler echoed a claim made in a Trump campaign lawsuit filed Monday that Pennsylvania voters who cast ballots in person vs. by mail were held to different security standards. In-person voters were monitored by poll workers and had their signatures compared with what was on the voter rolls, while mail-in ballots could be requested by filling out an online form.

Cutler’s press conference came hours after more than a dozen rank-and-file Republican lawmakers, including Reps. Dave Zimmerman (R., East Earl) and Brett Miller (R., East Hempfield), announced they want to block certification of Pennsylvania’s election results until a legislative-led audit is completed, separate from the one the state government committee will complete. These lawmakers want House leaders to create a new investigative committee with subpoena power.

Smucker calls on Trump to accept election results once certified, top state officials to recuse themselves from investigations

Cutler said he had not read their proposal, but would consider it.

Meanwhile, Cutler said he hopes the State Government Committee is able to release an interim report on the election by the end of November.

In a news release issued Tuesday afternoon, Grove echoed Cutler’s claim of “undue and ill-conceived interference in our elections” by the Department of State and the majority-Democratic justices on the state Supreme Court.

“We need to investigate what transpired so we can develop a comprehensive legislative fix to ensure that the people of Pennsylvania can have faith in their future elections,” Grove said.

House Democrats on the committee will participate in the review “to try to keep the process honest, if nothing else,” a caucus spokesperson wrote in an email.

The election review by Grove’s panel was announced as counties are still in the process of conducting mandatory audits of 2% of ballots cast in each race. Many counties are also conducting “risk limiting” audits, a method that will be mandatory statewide in 2022 and which takes a statistical approach to detect fraud.

Cutler was also renominated to his top position in the chamber on Tuesday. He became House Speaker in June after the retirement of his predecessor, Mike Turzai.

Lancaster County has reached the “substantial” level of community transmission of COVID-19, according to an update to the state’s weekly early monitoring dashboard.

For Lancaster County’s two Republican commissioners, the question over what to do with mail-in ballots that arrived after polls closed on Elec…

This article is made possible through Votebeat, a nonpartisan reporting project covering local election integrity and voting access. This arti…

After the 2020 Election, should we trust polling? A Q&A with the Franklin & Marshall College Poll director

When President Donald Trump held a campaign rally at Lancaster Airport last month, he told the more than 10,000 people in the audience that th…

A Lancaster County man who claims his mail-in ballot was rejected in the Nov. 3 election joined President Donald Trump’s lawsuit to prevent Pe…

U.S. Rep. Lloyd Smucker will return to Washington, DC, this week for the remaining days of a  “lame duck” session during which lawmakers hope …

President Donald Trump spoke with Pennsylvania House Speaker Bryan Cutler twice in the past week, asking one of the state’s highest ranking Re…