Supporters of President Donald Trump climb the west wall of the the U.S. Capitol on Wednesday, Jan. 6, 2021, in Washington. 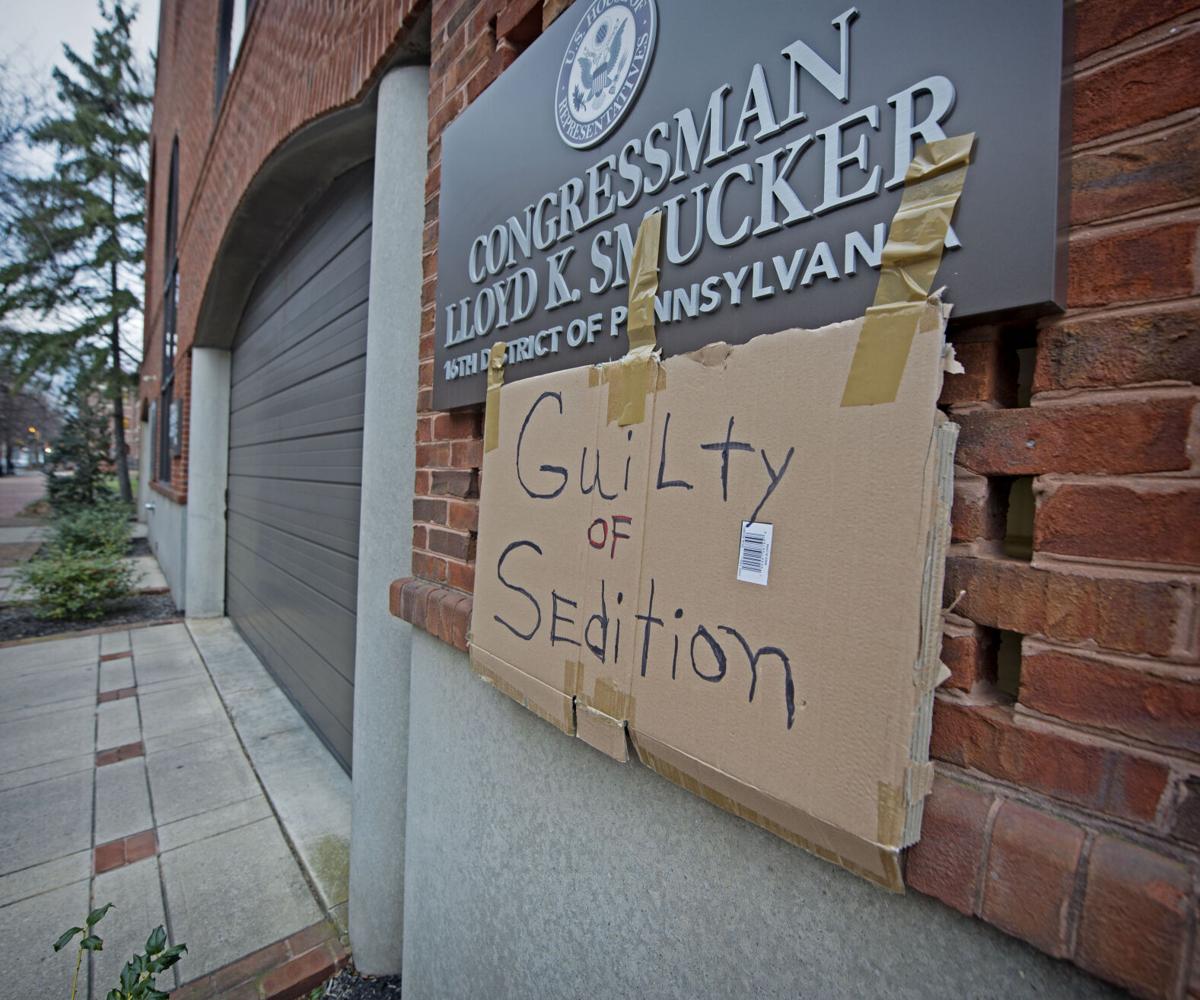 A cardboard sign with "Guilty of Sedition" written on the sign was hung on the wall of the building that houses the office of Congressman Lloyd Smucker 51 S. Duke St. in Lancaster city Wednesday, Jan. 6, 2021.

In November, Lancaster County’s representative in the U.S. House Lloyd Smucker said he was unhappy that President Trump had lost the election, but he said he was determined to work with his Republican colleagues to advance the party’s agenda under a Democratic president.

In the two months since, he, like many others in his party, shifted to challenging the results that gave President-elect Joe Biden Pennsylvania’s 20 electoral votes, endorsing long-shot lawsuits and legislative tactics designed to reverse the election’s outcome and give Trump a second term.

Even the attack on the U.S. Capitol by an angry mob incited by Trump wasn’t enough to cause the congressman to reconsider his objections. He said he still plans to object to Pennsylvania’s electors when the House reconvenes Wednesday night to finish its work certifying Biden’s Electoral College victory, citing it as his only chance to voice his constituents’ concerns with how the election was conducted.

Earlier in the day, as rioters broke into the Capitol and disrupted debate in both the Senate and House, Smucker said he was in his office in the Cannon Office Building, south of the main Capitol building. He and his staff watched the attack on television, just like the rest of the country.

“I was watching it unfold on the screen,” Smucker said. “It’s unbelievable the kind of images we’ve been seeing here today. It’s horrendous. It is not who we are as Americans, and it’s a travesty.”

“This is going to go down as a terrible day in American history,” Smucker added.

He and his staff were safe. They were being held in a safe location in the Capitol Complex, as of 6 p.m.

Smucker said he still objected to Pennsylvania’s electors, calling it part of the constitutional process, “and the only time throughout the process I can speak for my constituents in my district.”

Smucker said he only objected to Pennsylvania’s electors and would not join any Republicans seeking to block the electoral votes of other states.

He repeated the same attacks on the election made by many Republicans over the past two months, arguing that Secretary of State Kathy Boockvar and the state Supreme Court interfered with the election, making it possible for fraud or inaccuracy in the final results.

“The point is that everybody, win or lose, needs to be confident that they understand the rules and needs to know the election was conducted fairly and equitably,” Smucker said. “Until we get to that point, we’re going to continue to be in this ridiculous place in what we saw here today and in the last five years.”

He conceded it’s a lost cause, given that Democrats control the House and there are enough GOP senators on record opposing these efforts.

“I’m under no illusion, I can count. I can do math. I know that today, and I’ve been telling people this, it’s not going to change the outlook of the election, he said. “It’s time for me to register legitimate concerns by my constituents on how this election was conducted.”

Smucker said Trump’s initial comments about the attack on the Capitol were “a good start.”

“The president should be unequivocal in his condemnation,” Smucker added. “He has already told people to go home, but he needs to continue to give that message.”

Despite Wednesday’s events, Smucker said he’s still confident there will be a peaceful transition of power in two weeks.

“The fact of the matter is the Trump team was unable to show widespread fraud in Pennsylvania, and so the results of the election are what they are,” Smucker said when asked about Trump’s claims the election was stolen from him. “That’s aside from the concerns with the way the election was conducted, which may or may not have affected the outcome.

“The last step in this process is certification of the electors by Congress and I fully expect, like it or not, that that will occur,” he said.

Smucker made contact with at least two Lancaster County residents who had organized bus trips to Washington, D.C. on Wednesday to ensure they were safe and “strongly advised” them to go home, he said.

On Wednesday afternoon, a poster saying, “Guilty of Sedition,” was seen taped to the sign marking Smucker’s office in Lancaster city. Asked about it, Smucker said he appropriately condemned Wednesday’s protests and asked people not to participate in the violence.

“I guess I always have haters out there,” he added. “We are who we are because there’s an order about things that we agree on, and that’s very different from some of the images that we saw today.”

Members of Congress from two districts that abut Lancaster County also took to Twitter to condemn the attack and report that they are safe.

Rep. Scott Perry, a Republican from York and Cumberland counties, wrote: “Today in DC should have been about meaningful debate, peaceful protest and the Rule of Law — not chaos and talks of coups. I unequivocally condemn any violence and criminal acts taking place, and pray for a restoration of peace.”

Rep. Chrissy Houlahan, a Democrat from Chester County, wrote: “I served this country in both the Air Force and now in Congress. People give their lives so that we can live in a peaceful and free society with a peaceful transition of power. Today’s violent actions at the Capitol are the antithesis of who we are as a country.”

In a rare break with President Donald Trump since the two Republicans arrived in Washington,…

After many of them spent the past two months sowing doubts about the legitimacy of President-elect Joe Biden’s victory in the 2020 election, R…

What's the 25th Amendment? Can it remove President Trump from office? Here's what to know

After a mob of Trump supporters stormed the U.S. Capitol Wednesday, with President Donald Trump himself urging them at a White House rally sho…

Lancaster Stands Up calls on Smucker to resign

Lancaster Stands Up is calling for U.S. Rep. Lloyd Smucker to resign, charging he had responsibility for fomenting chaos in Washington D.C.

Early Thursday morning, hours after law enforcement cleared the U.S. Capitol Building of thousands of rioters who had invaded it twelve hours …

Lancaster County residents were in Washington on Wednesday: ‘What’s going to happen today is going to be historic’

In the hours and days after the insurrectionist mob attacked the U.S. Capitol, LNP | LancasterOnline sought to talk with county residents who …

In the five days since President Donald Trump encouraged his supporters to storm the U.S. Capitol to overturn the election, U.S. Rep. Lloyd Sm…

Some LNP readers ask Rep. Lloyd Smucker to resign, others praise his work: Here's what they say [letters to the editor]