Update Sept. 12: This story as been updated with additional comments from Doug Lamb.

Doug Mastriano is running an unconventional campaign for governor. He’s not raising a lot of money. He prefers to attend closed-door events with his base or campaign at public events where reporters are often kept at arm's length.

But the Republican nominee’s campaign is also notable for another reason: Mastriano has surrounded himself with a non-professional, armed security team whose members include at least one person with direct ties to a militia group.

Mastriano’s detail includes several members of a relatively new evangelical church near Elizabethtown, LifeGate, whose leaders have spoken openly about electing Christians to office to advance biblical principles in government.

Perhaps the most visible member of the security team is James Emery, an Elizabethtown Area School Board member who has been photographed providing security to Mastriano at numerous events over the past year, sometimes armed. Earlier this month, Emery blocked members of the news media from entering a room in Erie where Mastriano was scheduled to speak to local business leaders.

Emery is an active and visible member of the congregation at LifeGate Church. A November 2021 post to the church’s Facebook page refers to him as a licensed minister and congratulates him for completing the LifeGate Leadership Development School.

At a LifeGate meeting in May, Emery described himself as one of Mastraino’s “lead” security members. During an Easter Sunday testimonial, he revealed the names of four other congregants who work on Mastriano’s security team.

“I just want to ask for prayers while there’s a few in this congregation that have joined the (Mastriano) team: Scott and Skip and Dan, myself, and Carl,” Emery said. “We’re doing security for Mastriano and it comes with a lot of weight these days.”

The “Scott” mentioned by Emery is fellow LifeGate member Scott Nagle, who until recently was listed as a regional leader for the Oath Keepers, a militia group founded in 2009.

A photo from an early April event in Mercer County, which was reviewed by LNP|LancasterOnline, showed Nagle posing shoulder-to-shoulder with Mastriano. Also in the photo were Dan Slade and Carl Runkle, two other LifeGate members, along with Emery, Franklin County Constable Dom Brown and three other unidentified members of the security detail.

Emery said his security work for Mastriano is done as a private citizen expressing his First and Second Amendment rights. Nagle did not respond.

Photos and video from the Mercer County rally and other events show security team members wearing blazers and mismatched earpieces. Some appear to carry concealed firearms under their jackets.

Historically, candidates in Pennsylvania have not traveled with large security teams, the exception being incumbent governors who are provided Pennsylvania State Police protection as part of their office.

Josh Shapiro, Mastriano’s opponent, is accompanied by agents from the Attorney General’s Office as part of his position, campaign spokesperson Will Simmons said, though he declined to comment further on security details. Campaign finance reports showed he paid $3,125 for a police department for security in March.

It is unclear if the members of Mastriano’s security team have formal training, other than Nagle, who works as a firearms instructor for the United States Concealed Carry Association.

Pennsylvania does not require licensing for security guards, as it does for many other professions.

But the state’s Lethal Weapons Training Act requires privately employed security agents to receive training if they are required to carry lethal weapons as part of their duty, said Berks County attorney Joshua Prince, an expert on firearms law. A guard who is not required to carry a gun could still theoretically carry one for their own protection, he said.

The Pennsylvania State Police, which provides certification under the act, could not immediately confirm if the men identified from the April event are certified. The newspaper has submitted a records request for the information.

Brown was elected constable in November, and is scheduled to receive training from the Pennsylvania Commission on Crime and Delinquency in October. Constables are exempt from concealed carry permitting requirements in Pennsylvania.

It is also unclear how, if at all, the team is being paid. No payments to security firms or individuals described as security professionals are listed on Mastriano’s campaign finance reports for 2021 and 2022. The filings also do not show in-kind donations from a security firm .

One expense from May lists a payment of $266.09 for “travel” to a “James Emory,” a copy of the receipt shows it was mileage reimbursement for an event Emery attended. Emery said he is a volunteer.

Brown also received roughly $1,000 in travel reimbursements and consulting fees from March to May.

The Mastriano campaign did not respond to inquiries about his security team. Political analysts suggest Mastriano, considered one of the most extreme candidates on the fall ballot, may believe he needs to protect himself on the campaign trail given the country’s political division.

“I’ve not known state senators and house members to have security, per se. They might have aides following them,” said G. Terry Madonna, Senior Fellow in Residence for Political Affairs at Millersville University, though he added he has assumed in the past some of those aides were at events for security.

“But this doesn't strike me as unusual given where we are as a country. (Six or seven security guards) would seem to me to be unusually large, but again, given the environment we’re in.”

In 2020, Emery’s son, Jay, helped lead a group whose members attended a Black Lives Matter protest in Elizabethtown. At least one member was armed, and they stood alongside members of another militia group, the Carlisle Light Infantry.

The two groups have at least one overlapping member and appeared to be coordinating their actions at the protest.

At the time, a man who identified himself to an LNP reporter only as Jay, a 30-year-old Elizabethtown resident, said he was with the “Domestic Terrorism Response Organization,” which he said was “dedicated to protecting businesses, citizens and homes.”

An archived version of the now deleted Facebook page for the group, provided to LNP|LancasterOnline, shows Jay Emery as an administrator. The LNP reporter who covered the 2020 Elizabethtown protest, shown a photo of James Emery-Shea, confirmed he is the same “Jay” the reporter spoke with. 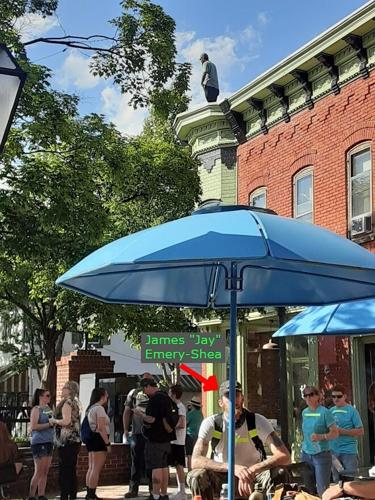 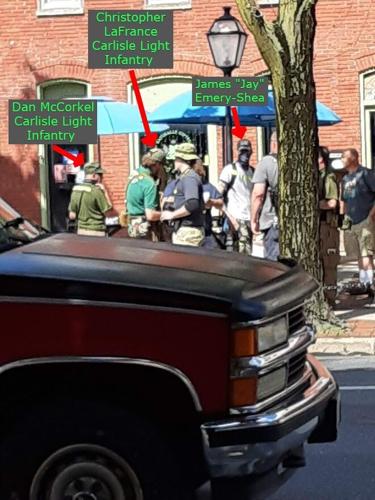 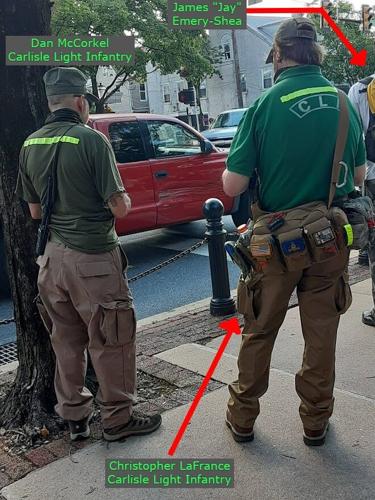 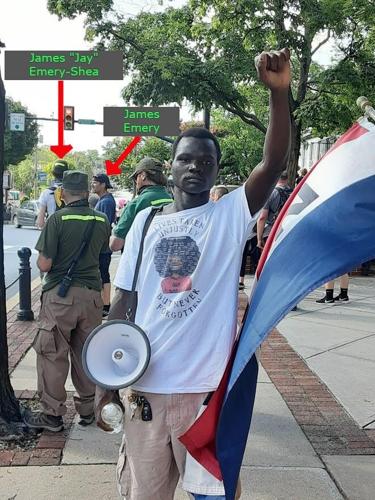 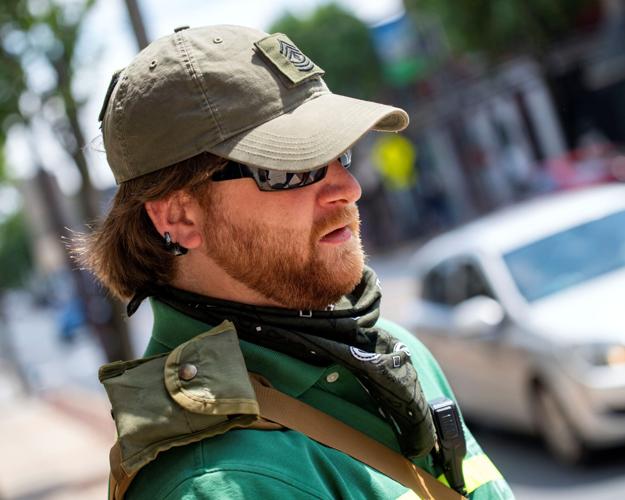 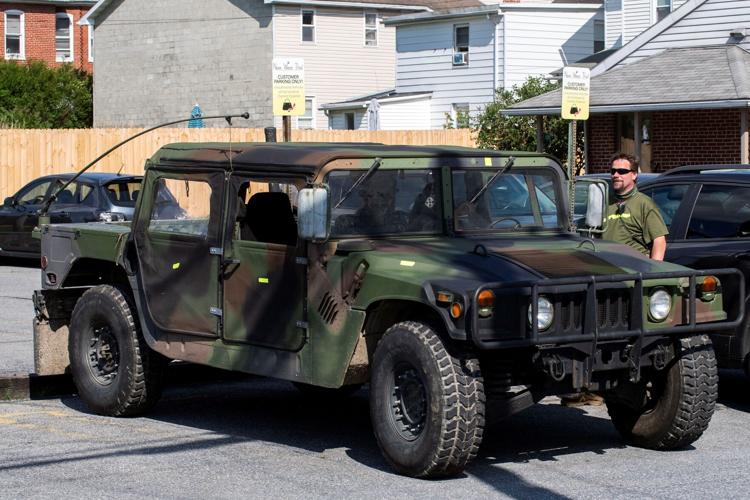 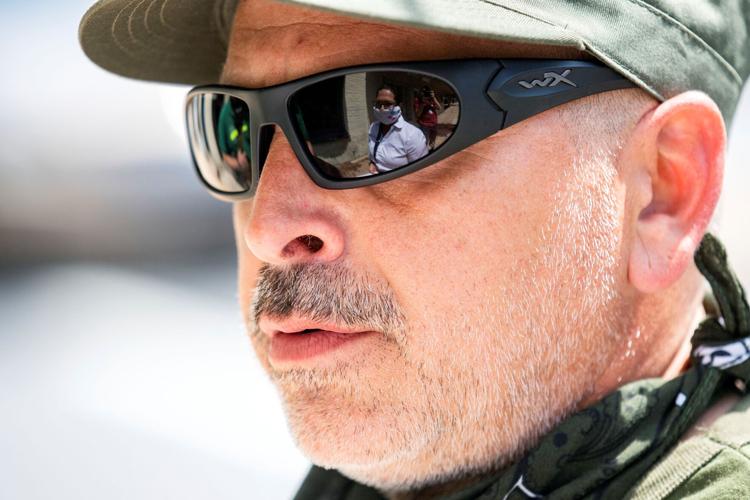 James Emery-Shea, in an interview this week, denied the group was a militia and said “the whole premise (of coming to the Elizabethtown event) was if there are more numbers there no one will try anything stupid.”

His father, James Emery, was also a member of the Facebook group, the archived records show. Photos and video show him attending the Elizabethtown protest and speaking with members of the militia group.

James Emery said he was there to pray with the Black Lives Matter leaders for everyone's safety, and has “never had any affiliation with any kind of militia.”

Nagle, meanwhile, was the Lancaster County chapter leader for the Pennsylvania Oath Keepers as recently as January of this year, but his name was removed from the group’s website after LNP | LancasterOnline contacted him at the time for a story on a pre-Jan. 6, 2021, meeting of militia groups in Quarryville.

The Oath Keepers are a right-wing militia founded in 2009 by Stewart Rhodes, a U.S. Army veteran from Montana. The Pennsylvania Oath Keepers split from the national group in 2015, but a social media post three days before January 6 alluded to armed veterans violently resisting election results.

The April event was not the first at which Nagle and Mastriano were seen together.

‘Flow from the pulpit’

Don Lamb, another pastor at LifeGate, said in a statement the church has not directed parishioners to engage in specific political activity, but that the church's members believe “the primary reason America is in a crisis spiritually and culturally is because Christians were duped into stepping away from the public square of culture and engaging in their civic responsibility.”

Emery, along with fellow LifeGate members Stephen and Danielle Lindemuth, won seats on the Elizabethtown Area School Board just a few days before Lamb’s sermon. A political yard sign for the three was placed on LifeGate property, though after this article originally ran Doug Lamb said it was not authorized by the church and quickly removed.

This year, LifeGate members campaigned to win seats to the local Republican committee. In a break between sermons in March, LifeGate member Sharon Ogilvie encouraged members to get active by signing petitions for local candidates.

“God has put the mantle of government on their shoulders,” she said.

Ogilvie is not just a LifeGate member. Along with Danielle Lindemuth, she is the head of the Elizabethtown chapter of FreePA, a group of grassroots activists who formed in opposition to coronavirus lockdowns and whose members were among Mastriano’s earliest and most vocal supporters.

In the county at large, FreePA was largely unsuccessful in challenging incumbent Republicans in the May 2022 primary. But in Elizabethtown, where FreePA membership crosses over with that of LifeGate, the group was much more successful.

Together, the LifeGate and FreePA members circulated a mock ballot which told voters to select them over some of the committee’s incumbents.

Former members of the Elizabethtown area GOP described the contest as “a hostile takeover.”

Logan Hoover, a West Donegal Township resident who lost a race for committeeman, said he thinks many of the incumbents who chose not to run did so because they saw this change coming.

“I guess it is my way or the highway, or it just seems like it is from an outside perspective,” said Logan, a former staffer for U.S. Rep. Lloyd Smucker, of FreePA’s approach to outside views.

Hoover said he thinks people will see this play out in different people being endorsed for positions in the area.

“It’s a little scary. As a Republican I hope Republicans do well, I don’t wish them ill will, but I hope we are true to who we are as a community and not just this one single group.”

Many LifeGate members are now turning their attention toward Mastriano’s campaign. At least five members have provided security, and Doug Lamb, the congregation’s pastor, made a $1,000 donation in May.

“We need to get real (and) we need to start living our Christianity out loud,” Emery said during an Oct. 2020 sermon exploring government shutdowns, racial division and removal of God from education.

"We allowed humbleness to turn into illegitimate passivity,” Emery continued. “(God's will) will flow from the pulpit, down to the pews, out through the parking lot, out into the communities, into our White House, into our Capitol building. And he wants to do this so that the law, so that the government, which we all know he created, can begin to serve him again."

This reporter’s work is funded by the Lancaster County Local Journalism Fund. For more information, or to make a contribution, please visit lanc.news/supportlocaljournalism.

Pa. lawmakers are in line for their largest automatic pay raise ever

The Pennsylvania Supreme Court charged taxpayers at least $147,000 for a multi-day celebration of its 300th birthday in Philadelphia, records show.

Rain and thunderstorms still linger around Lancaster County for the start of the week, but the whole week won't be a washout, forecasters say.

A Mount Joy man died in a motorcycle crash with another vehicle on Saturday night in Manor Township, according to police.

UPDATE: This story was updated Aug. 31 to reflect new information about Dayspring Academy's prior contact with FreePA.

Gov. Tom Wolf on Friday announced $4.2 million in grants for organizations at risk for hate-based violence.

‘Commonwealth before party’: Why some Republicans are endorsing Shapiro for Pa. governor

As Michael Chertoff was coming of age in the 1960s in Elizabeth, New Jersey, he found himself growing to respect what he saw as the conservati…