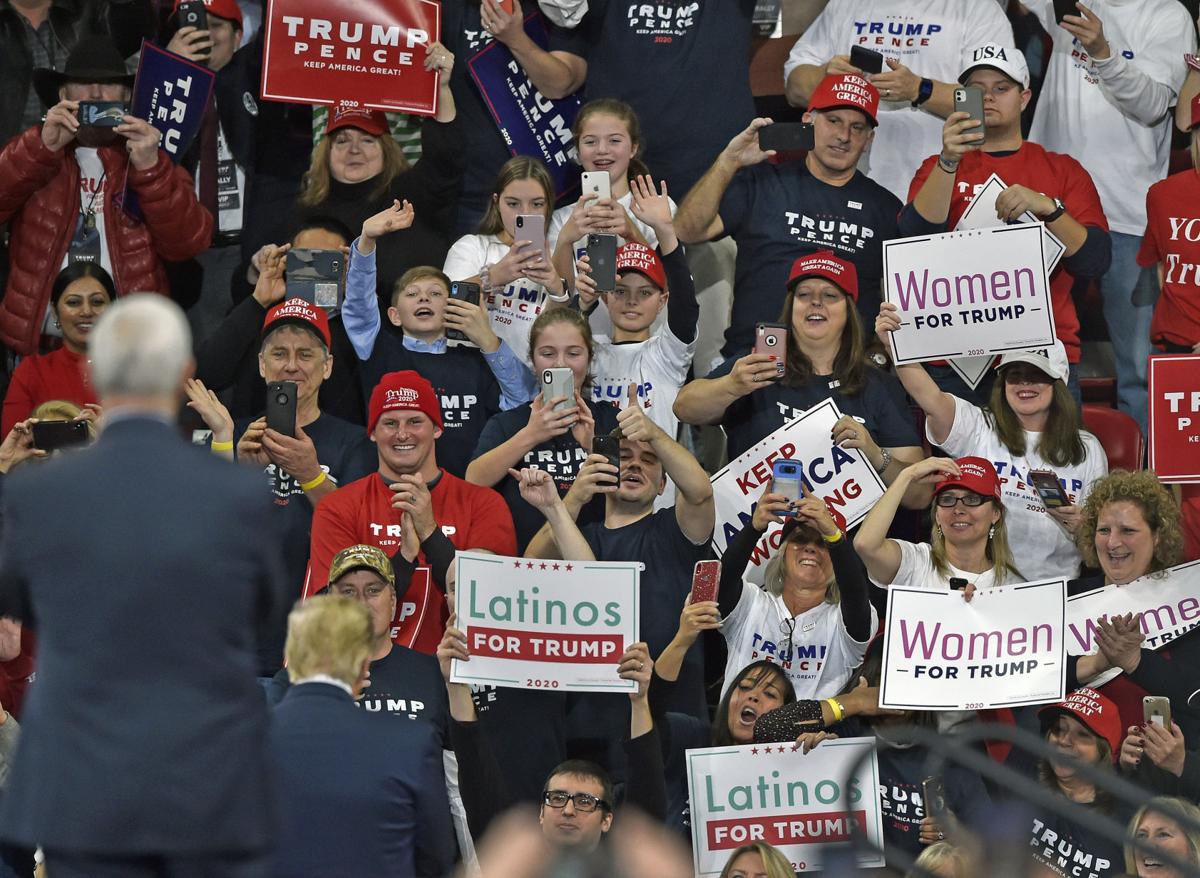 President Donald Trump and Vice President Mike Pence speak at a campaign rally at the Giant Center in Hershey on Dec. 10, 2019.

Nearly three out of five Pennsylvania voters don’t believe President Donald Trump deserves re-election, a finding in a new Franklin & Marshall College poll that suggests he has work to do to win the state a second time.

But the poll offered some good news for the embattled president as those favoring re-election grew to 41%, up from 37% in October.

“At the moment (Trump) would have a tough time winning the state, but I’m not prepared to rule it out,” said G. Terry Madonna, a pollster and analyst at F&M’s Center for Politics and Public Affairs.

“He’s improved slightly over where he was in October. That’s true nationally as he rallies Republicans around him in a very strong and decisive way” during the impeachment fight, Madonna said.

The survey found that 57% believe he doesn’t deserve reelection, down from 59% in October and 61% in July.

Meanwhile, the poll found former Vice President Joe Biden still leads those seeking the Democratic nomination for president, but his support has slipped to 22%, down from 30% in October.

And the poll finds surprising support for Michael Bloomberg, the former mayor of New York City who wasn’t an announced candidate at the time of the October poll. Bloomberg has the support of 7% of Pennsylvania Democrats, putting him in fourth place, ahead of Pete Buttigieg (6%), Amy Klobuchar (5%) and Andrew Yang (5%).

Bloomberg “has emerged as a contender in Pennsylvania,” Madonna said. “Pennsylvanians are seeing his ads. There’s no doubt about that.”

Poll participant Jill Greiner, 76, a retired educator who lives in Manheim Township, said she is a registered Democrat who favors Warren because “she’s a very bright woman, but also willing to listen to other people.”

But Greiner said she has concerns about Warren’s electability and could see herself voting for Biden, Bloomberg or Buttigieg — anyone but Trump.

“I’m very unhappy with the way he has been treating the constitution and the country,” she said of Trump. “It scares me how he refuses to listen to any advice.”

But poll participant Calynda Hineline, 57, a registered Republican in York County who works in customer service, said she would vote again for Trump because she thinks he’s kept his promises and “tells the truth.”

“I don’t like what the Democrats are doing these days,” Hineline said, adding that she fears they would usher in socialism and “one-world government.”

Poll participant Daniel Morales, 50, of Manor Township, is a registered independent who said he favors Warren for her stands on economic and social justice. He said he voted for Green Party candidate Jill Stein in 2016.

The current unsettled state of the Democratic field means Pennsylvania’s relatively late primary on April 28 could still play a role in deciding who the nominee is, Madonna said.

Democrats call health care (20%) the top issue and honesty (42%) the quality they most want in a president.

A large majority of voters report they are financially “better off” (33%) or the “same” (54%) compared to last year.

The survey of 628 Pennsylvania registered voters — including 292 Democrats, 251 Republicans and 85 independents — was conducted from Jan. 20 to Jan. 26 while the impeachment trial was underway in the Senate.

The poll has a sample error of plus/minus 6.2 percentage points, F&M said.

They live and work in the top tier of the pecking order in Pennsylvania politics. They raise lots of campaign money. They amass clout on their…